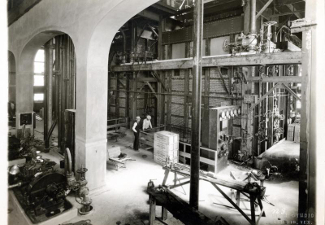 It's a reservoir caused by a dam on the Rio Grande River bordering Texas and Mexico, and now Amistad provides a place to boat, hike, water ski, and camp in a desert lake environment while history awaits, both below the surface and on its border. Yes, it's a hot place. Yes, it's a wet place. And while you boat there, you may wander into another nation. Beware of that and know the rules about border crossings, either on the lake or on the land. It's also a place with a history footprint; unfortunately some of that has been lost to the brine, although some of it does remain in remote locations. Ask where when you go and how to get there. It may require a boat. 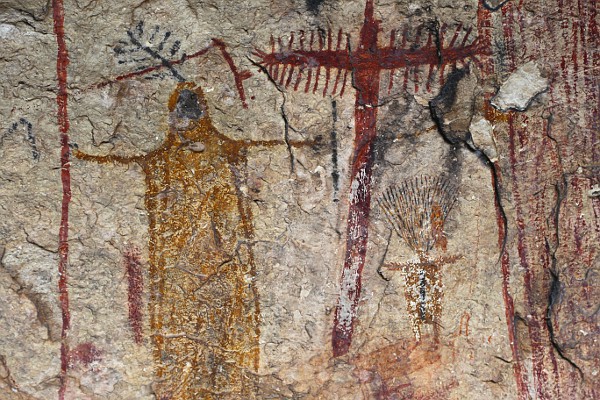 Construction of the dam and flooding of the area caused many historic structures to be lost beneath the water, including 14.3 miles of Southern Pacific Railroad tracks, three former power plants and associated structures, plus a number of Native American sites. The park was established by the International Boundary and Water Commission in 1965 and transferred to the National Park Service in 1990. Some remnants of the past heritage remain, although they can be hard to find. The tunnel still exists, as well as the Shumla Station, although it has been moved from its original site. The South Pacific Railroad's Painted Cave Station, not the buildings, but the more modern version of rock painting from the railroad era, graffiti, can be seen while visiting Parida Cave, which has Pecos River pictographs in the style, but perhaps less elaborate than Panther Cave.

Railroad History - Captain William Monroe, working for the Southern Pacific Railroad, built two tunnels near the Pecos River at its junction with the Rio Grande in 1882. The first was the initial railroad tunnel in Texas. Mr. Meyers built a saloon and store near the construction camp. A railroad station, Painted Cave Station, was constructed between the Pecos River crossing and Flanders Station, now part of Seminole Canyon State Historic Park. Other stations, such as Shumla, were built along the line. Amistad Dam - A solution to the floods and droughts along the Rio Grande River had been a major problem for decades with the first dam built, Elephant Butte, in New Mexico in 1911, which solved problems along the middle Rio Grande, but did nothing in the area of the Pecos River. Falcon Dam was built in the lower area in 1953, but the 1954 flood proved that it was insufficient and that a larger dam needed to be built. Work on the Amistad Dam began in 1963 and would be completed six years later. New power plants were added on both sides of the dam in the 1980s. 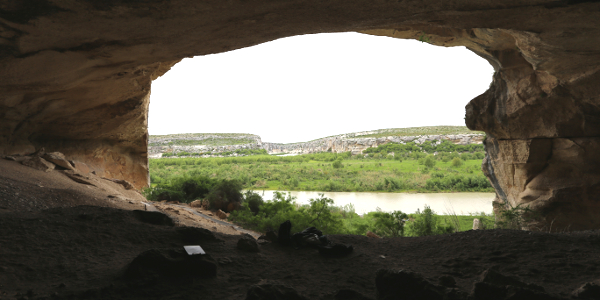 Amistad is about friendship; it's what the word means. Now, with the completion of the dam in 1968, that friendship was about sharing water resources, both in control of floods as well as irrigation to mitigate the problems of drought. The reservoir covers 65,000 acres with a shoreline of 851 miles, 547 in the United States. It now provides hydroelectric power, nearly 300 million kilowatt hours per year in two plants, one on each side of the border. Of course, to most visitors today, it provides the backdrop for recreation. Camping, hiking, hunting, houseboating, fishing, and scuba diving, to name a few. Some of the campsites have spectacular views of the water, albeit in a hardscrabble desert backdrop and a very hot much of the year tableau. While much of the history has been overwatered and no longer available to witness topside, you can still access rock art in the upper reaches of the park at Panther and Parida caves. You're talking rock art four thousand years old and other archeological sites in the area that are ice age inspired. Kind of a shame some of it is below water level now. 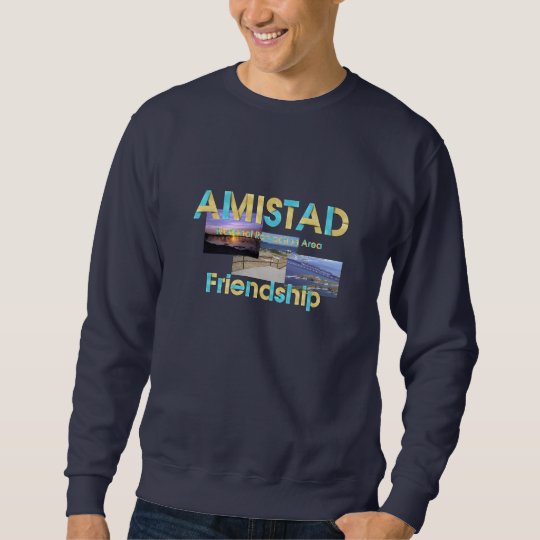 Amistad National Recreation Area T-Shirts and Souvenirs from the official merchandise of America's Best History. Great for your next western vacation or planning session. 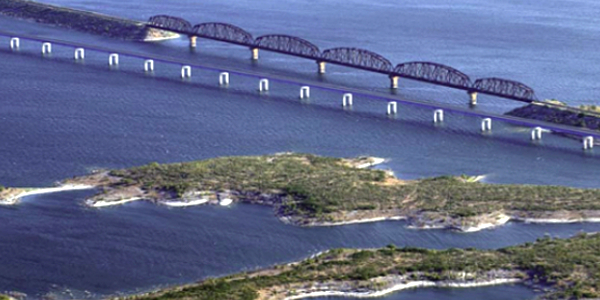 1. Get a feel for the history and opportunities at Amistad NRA by heading to the Visitor Center and watching one of several films. "The Transparent Border" discusses the Amistad park. "Spirits of the Canyon" and "Windows to the Past" talk above Indian rock art. "A Land of Contrast" discusses Big Bend National Park, if that's on your agenda as well. Most films are about thirty minutes long.

2. Use your boat. There's seventy-four miles up the Rio Grande River to explore and other rivers as well, taking you to unique canyons and fishing spots, plus places to camp. If you intend to head into Mexican waters, please ask at the Visitor Center about the permits required and rules of the lake. This is a bring you own boat park with no boat rentals available at the moment. For those with their own, public boat ramps exist all over the northern and southern shores of Amistad Reservoir.

3. Use your feet. It's hot here and hiking should be relegated to those fit enough to brave the elements. Be smart and prepared for the heat and terrain. There's a guided hike most Saturday mornings, but whether you want to be guided or head out on your own, there's a variety of trails from the short interpretive kind under a mile in length to longer hikes like those at Figueroa Ranch. 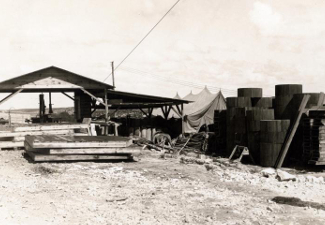 Amistad Visitor Information Center - Open daily along south-central part of lake. It has exhibits, a theatre with orientation movies on the park, border, and southwest, a book store, and ranger orientation.

Panther and Parida Caves - Depending on water levels, these caves have boat docks and interpretive trails with rock art dating back five thousand years. Please ask about the best places to launch if visiting these sights is something you want to do. And please respect the heritage of them by adhering to all rules and regulations. For those without a boat adventure, you can visit Seminole Canyon State Historic Site nearby and take a guided hike to the vicinity of the caves and other archeological sites from there.

Photo above: Construction of the Lake Walk Dam, now replaced by and under the Amistad National Recreation Area waters. Source: National Park Service. 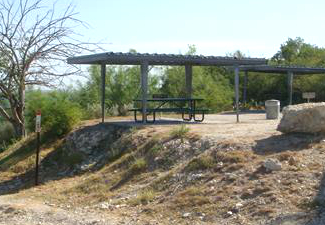 No lodging or food within the park itself; there is ample lodging and food in Del Rio, Texas. Check out your favorite online site for the motel, hotel, or bed and breakfast of your choice.

There are five developed campgrounds within Amistad NRA and backcountry camping is allowed along the shoreline and other places that are considered undeveloped. Check with the park visitor center for the appropriate backcountry locations.

Developed Campgrounds are open year round, do not take reservations, and there are no hookups. 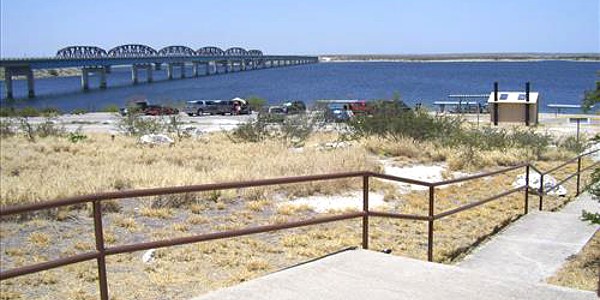 The physical address is 9685 Highway 90, West Del Rio, TX 78840 for those with GPS devices. For those coming from Del Rio, take Veterans Boulevard North to US-90 West. Approximately fifteen miles and twenty minutes to the Visitor Center from the middle of town. Look for signs on the right side of the road to the Visitor Center prior to crossing the US-90 bridge.