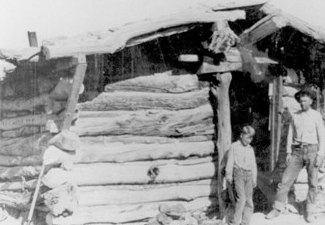 In many ways when you visit the Moab, Utah area for national park and nature fun, you're getting two parks in one. Arches, the smaller of the two, but by far, the most popular on the northern end, and Canyonlands, to the south. And while both suffer in publicity to their bigger cousins even further south, i.e. Zion and the Grand Canyon, the vistas here and arches that dot the landscape are some of the most spectacular in the western United States. So when you're bound for those more popular cousins, take a trip north deeper into the belly of those Utah peaks, camp within its edges, and tour the brilliant scenery of Arches National Park. Who said there's only so much wonder to go around anyway. 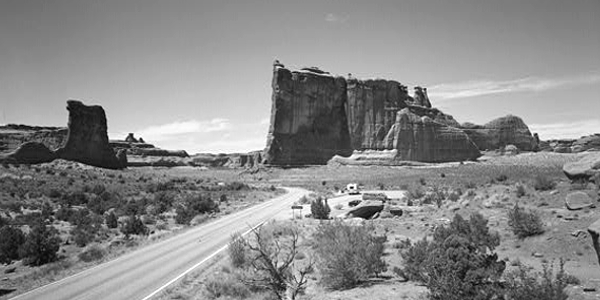 In many ways, the park represents a story of pre-human history with its magnificent landscape culled by God, but even the human history has a tale that's 10,000 years old. Yes, back in the Ice Age. 8,000 years later, the hunters and gatherers came. By the time the Europeans arrived in 1776, the Shoshonean people of the Ute and Paiute were here. Want to see what they were about? Check out the petroglyth panel near Wolfe Ranch.

Once the Europeans came, at first, the Spanish, they traded along the Spanish Trail, now Route 191. The Mormons would come and establish the Elk Mountain Mission in Moab in 1855, although the mission would fail due to conflicts with the Ute tribe. It wasn't until twenty-five years later that Moab was permanently established. You can still see some of the then in Wolfe Ranch and the Courthouse Wash Panel. 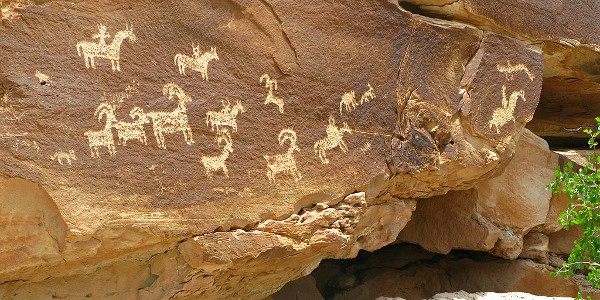 Within the over seventy thousand acres of Arches National Park, two thousand arches rise above the canyon floor to tower of the land, and now, actually since Herbert Hoover preserved Arches with the Antiquity Act in April 1929, its visitors. It's had its famous moments; look through Indiana Jones and the Last Crusade and you'll see the Windows section of the park. It has its world famous arches, Delicate Arch, and its lesser known relatives.

So whether you're a hiker or auto tour fanatic who loves to see landscape weathered by time, but predominantly let alone by man, take a drive through this park, get out your cell phone, and snap a few hundred pictures of beauty that, at times, is hard to imagine. It will be well worth the trip and might just rekindle your wonder and soul along the way.

It's funny how in Arches the then and now seem to merge into one awesome scene. Those arches that remain have been there for thousands of years, changed, yes, by time and harsh nature, forty-three have collapsed since 1977, but still predominantly the same. That's what's so special about this and the other Utah parks. It's almost impossible to list all of the magnificent sites you can witness; Delicate Arch, Moab Faults, Sheep Rock, the Great Wall, Double Arch, Cache Valley, The Garden of Eden, North and South Windows, Tower Arch, and many more.

There aren't a whole lot of structures here. Stop at the Visitor Center to get oriented, buy a few snacks, and get water. There are no restaurant facilities within the park. The only other water available is at Devils Garden Campground at the end of the park road. Wolfe's Ranch is a must see a bit more than halfway up the road. It was settled in 1898 by a Civil War veteran and at one time, six people lived there, which, when you look inside, is hard to believe.

Arches National Park T-Shirts and Souvenirs from the official merchandise of America's Best History. Great for your next western vacation or planning session. 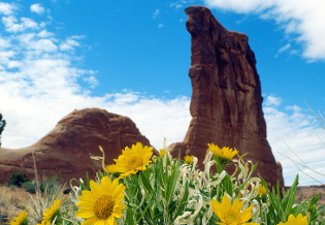 1. Stop at the Visitor Center. First, the setting there is beautiful and it's a good idea to get a handle on the topography ahead and what might be good for your group. Some of the trails are difficult. Navigating the park itself, by road, is fairly easy, with one road in and out, plus two dekes.

2. If you're fit and up for it, take the Fiery Furnace Guided Walking Tour. It's hard, three hours long, and requires you to jump and climb. It's also expensive, in relative terms. But if you are in fitness mode and want to see some spectacular things, it might be just the thing for you.

3. Take 4.5 hours and drive amongst the wonder. In that amount of time, you can travel all of the roads of Arches National Park and walk a bit amongst the arches that nature has provided.

Photo above: Nature beneath the arches. Source: National Park Service. 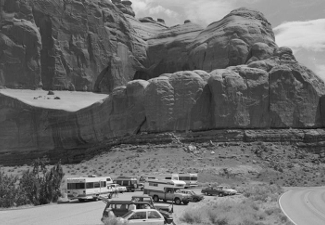 Trails, trails, and more trails. Arches, arches, and more arches. Photo above: Just one entrance to a trail west of the Visitor Center off Maryland Route 77.

This park is a hiker's paradise, although many of the trails are only suitable for experienced and fit hikers, plus it gets very hot here, over 100 degrees, and there's not much shade. So try to hike early or late in the day, bring plenty of water, and wear sturdy shoes.

Trails under One Mile - Balanced Rock, Double Rock, Delicate Arch, Sand Arch, Skyline Arch. Most of these trials are considered Easy by the Park Service. Not sure if they're right or not.

There are also exhibits, facilities, and orientation in the Visitor Center to enjoy and ranger hikes during the spring to fall seasons, some free, one not. Wolfe's Cabin and the Courthouse Wash Rock Art are must sees. 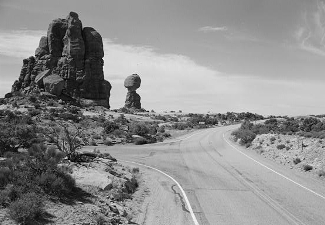 Arches National Park is located five miles north of Moab, Utah. Take Route 191 North. The park entrance station is located on the north side of the road.

There is no hotel or motel lodging within Arches National Park. There is one campsite at the farthest end of the park road, eighteen miles in, Devils Garden Campground. The fifty sites there fill up pretty fast in the summer months.

Photo above: Historic view of the entrance road into Arches National Park. Courtesy Library of Congress.

Just outside the park on Bureau of Land Management Land on the south side of the Colorado River, south and west of Arches National Park, there are a number of campgrounds run by BLM. Goose Island (19 sites), Granstaff (16 sites), Drinks Canyon (17 sites), Hal Canyon (11 sites), Oak Grove (7 sites), Big Bend (23 sites), and Upper Big Bend (8 sites) Campgrounds provide a good alternative and great places to camp. Goose Island and Big Bend are RV friendly. All together, there are twenty-six campgrounds within the Moab unit of the BLM, so there will likely be at least one open for your camping experience when you go. Other private campgrounds and National Forest campgrounds are also available.

For those more into the motels and bed and breakfasts route after your hike or visit, Moab has a variety of lodging choices from the typical chains to smaller private units. Check out your favorite online lodging site for the lodging type of your choice.