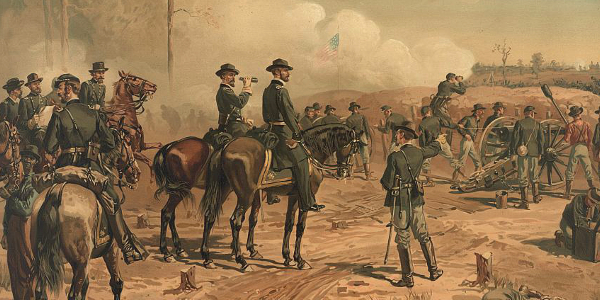 Photo above: Union soldiers on horseback during the Siege of Atlanta, 1888, Thure de Thulstrup, L. Prang and Company. Right: The Battle of Resaca, Kurz and Allison, 1889. Courtesy Library of Congress. General William T. Sherman would march into northern Georgia toward Atlanta, his eventual goal to occupy the manufacturing city and then March toward the Sea. He had one hundred and ten thousand troops in part two of the Grant strategy to end the war. So while Ulysses S. Grant and General Meade sieged Richmond and Petersburg after battles at the Wilderness and Spotsylvania to his north, Sherman would begin his march. Today, the sites of what would be known as the Atlanta Campaign are less interpreted, outside of Kennesaw Mountain, than Civil War historians would like, but that does not make them any less important. Because when General Sherman and Union troops started May of 1864 at battles north of Atlanta at Rocky Face and Resaca, it would start over four months of devastating attacks against the Confederate south that would prompt a famous movie, Gone with the Wind, and point, just as importantly, toward Appomattox and surrender as anything Grant and Meade would do in Virginia. 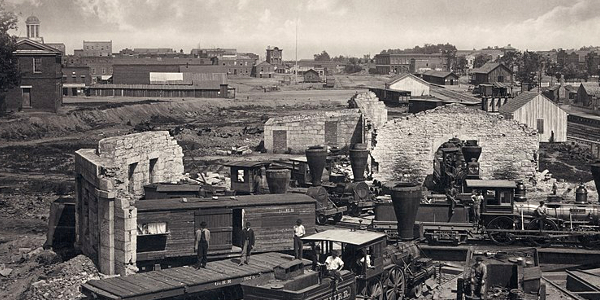 General William T. Sherman invaded Georgia from the Chattanooga area in early May 1864, focusing his forces against those of Confederate General Joseph E. Johnston. Johnston had 53,800 troops within his command, with reinforcements to arrive adding 15,000 more. The battles began with a series of small skirmishes, the first at Stone Church. They escalated as Johnston and his Army of the Tennessee retreated back toward Atlanta, including major battles at Resaca, Kennesaw Mountain, Peach Tree Creek, and a series of battles around the city of Dallas, Georgia.

By mid-July, the Confederate heirarchy had become disenchanted with Johnston's command, even though he had some success at stalling Sherman's movement south at the Battles of New Hope Church and Kennesaw Mountain. But Sherman's superior amount of troops could not be stalled much longer, and after crossing the Chattahoochie River on July 8, Confederate President Jefferson Davis replaced Johnston on July 18 with a more aggressive General John B. Hood. It did not matter much; Union troops were within five miles of the city. Hood's frontal assaults could not prevent Sherman's Union Army from attacking the environs of Atlanta, culminating in the Battle of Atlanta and Battle of Jonesboro where Union troops outmaneuvered and outnumbered Confederate forces 70,000 to 24,000. The Atlanta Campaign was over on September 2. Sherman took over the city, then marched toward the sea. Casualties for the campaign reached nearly 70,000 men, almost equally divided between Union and Confederate forces.

Timeline of the Atlanta Campaign 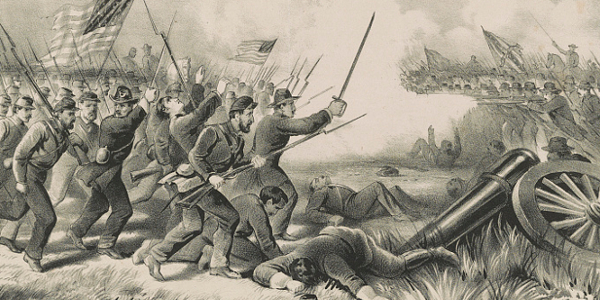 There's much to see, but not nearly as comprehensive, outside of the Kennesaw Mountain Battlefield, than historian and history tourists would like. But there are plenty of battle markers down many roads, and battlefields of Resaca, Pickett's Mill, and Dallas to explore that are well worth a visit, even to modest Civil War fans. The Atlanta History Center, with the new Whitaker Cyclorama Center now open as of February 2019, contains perhaps the most compelling remnant about the Atlanta Campaign story, the Battle of Atlanta Cyclorama, now refurbished. Of course, some will consider Gone With the Wind a better representation. That's up to you to decide, of course. 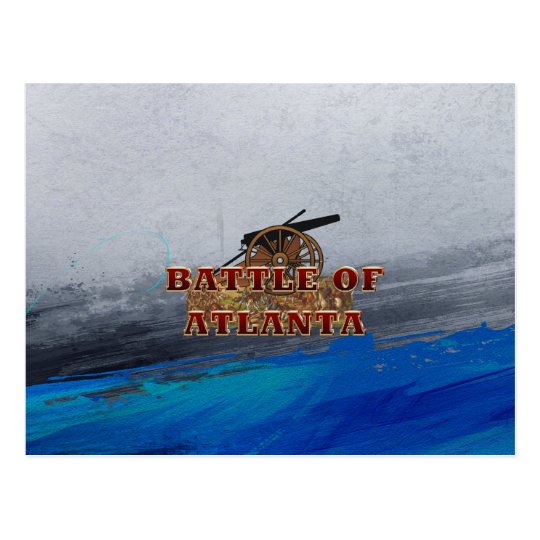 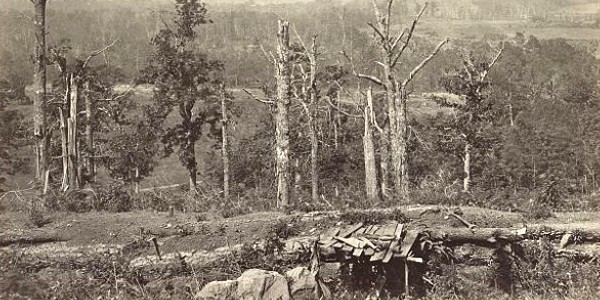 1. It's the most complete experience about a battle of the Atlanta Campaign, so you must visit Kennesaw Mountain Battlefield Park. View the thirty-five minute film, take a ranger walk, and wander through the exhibits. A shuttle will take you up to the summit during the weekends; your own car will do the trek at other times.

2. Since 2016, you can visit the one thousand acres preserved at Resaca Battlefield Historic Park and other area Battleof Resaca sites. There's no Visitor Center at the main battlefield, but lots of waysides to read and hikes to be engaged in.

3. With the Battle of Atlanta Cyclorama now restored and open, the new Whitaker Cyclorama Center at the Atlanta History Center provides a spectacular sound and light experience of one major battle of the Atlanta Campaign, the Battle of Atlanta itself. Along with exhibits, the Texas train, and other interpretation, it will be a must see if you're into Civil War and Atlanta history. And if the restoration is anything like that done with the Gettysburg Cyclorama, and we're sure it will be, you won't want to miss it.

4. If you have the time, check out Pickett's Mill Battlefield in Dallas. There's over seven hundred acres there to wander around and ponder the Civil War as it pushed toward its conclusion, Georgia style. 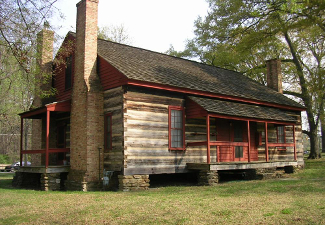 Resaca Battlefield Park - Opened in 2016 from lands preserved by the Civil War Trust, Gordon County, and the State of Georgia, the park includes over one thousand acres of walking trails and waysides about this early Atlanta Campaign battle.

Kennesaw Mountain Battlefield Park - This National Park recounts the battle on June 27, 1884 in the center of the Atlanta Campaign with a Visitor Center that has exhibits, orientation, and thirty-five minute film about the battle. There's also the Kolb Farm.

Pickett's Mill Battlefield Site - Recounts the Confederate victory on May 27 with a State Park, including a Visitor Center, film, and pioneer cabin. Site is located in Dallas, Georgia.

The Atlanta History Center in Buckhead is currently restoring the Battle of Atlanta Cyclorama and building a twenty-three thousand square foot building, the Whitaker Cyclorama Building, for it and Civil War exhibits. Cost of the restoration and building $35.2 million and scheduled to open in Fall 2018. The location of the Cyclorama is different since 2015; it used to be in its own building with Civil War Museum in Grant Park. 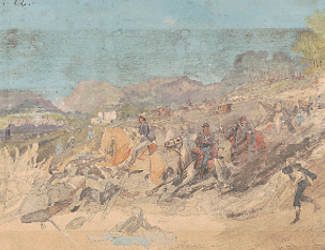 Other Preserved Places to Visit

Battle of Dallas - Sixty-four acres have been preserved by the Trust and much of the remaining battlefield is now part of the Paulding County High School campus, including Confederate trenchworks.

Historical markers can also be found at Leggett's Hill, Sherman's headquarters at Coppen Hill, in Jonesboro, and at the Troup Hurt House. There are also markers at Ringold's Gap and Rocky Face Ridge.

Photo above: Watercolor drawing of the Battle of Peach Tree Creek on July 20, 1864, 1864, Adolph Metzner. Courtesy Library of Congress. 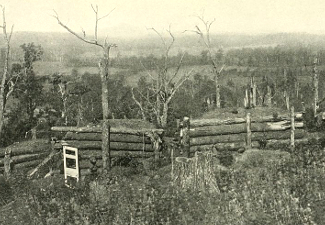 Following the chronology of the battles, you'll be working your way through northern Georgia and the north suburbs of Atlanta. As in the area of any large city, there are a variety of lodging choices on your way from site to site. Check out your favorite online travel site or the visitor bureau of the area for recommendations and lodging choices that suit your needs.

Photo above: View of the Confederate position at Kennesaw Mountain battlefield. Courtesy Library of Congress. 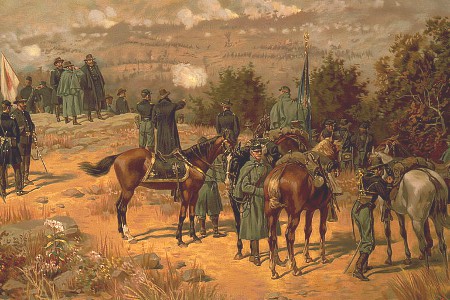