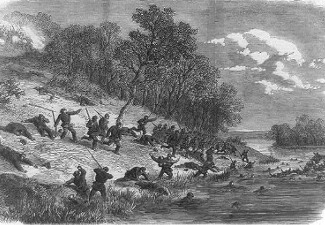 Depiction of the Battle of Ball's Bluff, courtesy Library of Congress. You're on your way to Manassas, Antietam, Gettysburg, or another Mid-Atlantic Civil War battlefield in Virginia or Maryland and you see a sign on Route 15 and it says Ball's Bluff. Now for the Civil War aficionado, they know exactly what that means. Ball's Bluff, the October 21, 1861 battle that pushed the Union Army into the river and proved that the Confederate victory at Manassas was no fluke. Ball's Bluff, the mistaken reconnaissance mission that once again proved that ninety day enlistments were not going to get this war done. 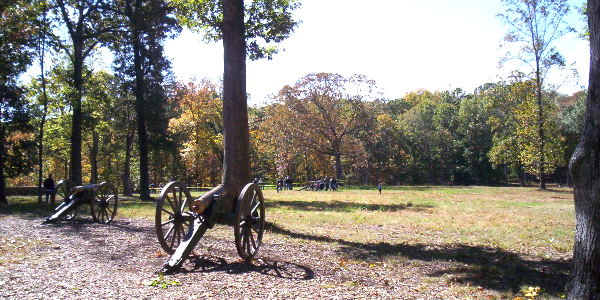 For others with an interest in history, but perhaps not a focus on the Civil War, they won't know exactly what that means or how important it was to extending the Civil War for four more years. And when we're talking about pushing the Union Army into the Potomac River, we're not talking a gentle shove. We're talking forcing them off a cliff and down a ravine that drops straight down. It is, perhaps, one of the two most different battles of the Civil War, along with the Battle of the Crater in Petersburg. There's really not another one like it. So if you're popping down Route 15 or going to Manassas or Gettysburg, take the short detour and roll into Ball's Bluff. It's really an amazing story about what happened just after the Civil War got started and why it would continue for so long.

The Battle of Balls Bluff was really a series of mistakes. At first, the Union troops on the other side of the Potomac River thought that there was a camp across the way, on Ball's Bluff, sighting tents, which they thought would be a good idea to raid. There were no tents; what they saw were trees. After eventually 1,700 to 2,000 Union troops, most inexperienced at this point in the war, made their way across the swollen Potomac River and discovered that, they stayed there. Confederate soldiers were three miles away, but noticed the new Union presence. When 1,600 Rebel soldiers arrived at 3:00, the battle ensued until dark, eventually causing the Union troops to race down the steep ravine to their boats in a melee of men and water. Five hundred and fifty-three were captured before they could cross. Two hundred and twenty-three were killed. That number included President Lincoln's best friend, Senator Edward Baker, then a Colonel in the army. It was the only time a U.S. Senator was killed in battle. Total casualties for the engagement were 921 Union (killed, wounded and missing) and 149 Confederate (killed, wounded, and missing).

Photo above: Scene at the top of Ball's Bluff battlefield where the Union Army, even though armed with three cannons to the Confederates zero, were forced back from and into the Potomac River. Below: Reenactors during the 155th Anniversary and a wayside marker at Ball's Bluff Battlefield. 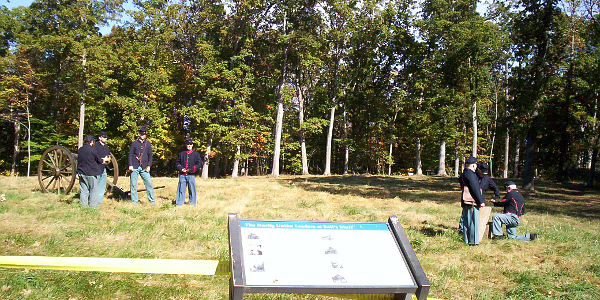 Balls Bluff Battlefield Regional Park is a relatively new enhanced experience, with new wayside markers and a clearing of the twelve acre part of the battlefield where most of the fighting took place which assists greatly in understanding the interpretation. Don't expect tons of facilities or well groomed paths. Don't expect large and wonderful such as parks like Gettysburg or Spotsylvania. Expect history in a raw form, but in an ever expanding form, perhaps in what may be a more genuine form, with guided weekend tours and October anniversary programs and celebrations ... once you get past the suburban sprawl.

Now, let's get to the particulars. When you turn east off Route 15 into what Virginia likes to call planned development, you're going to wonder just where a Civil War battlefield fits in all this. It just looks like suburbia. Once you take the next left, you'll think you might be going to a nephew's birthday party in one of the significant homes in a development and wonder whether you should have brought a better gift. And if you're into history, you're going to start feeling disappointment. But drive on through the tract homes for about a half mile to a sign for Ball's Bluff Regional Park and the wilderness tract along the Potomac River that seems as incongrous to what you've just passed as you can get. Then suddenly you can see how the Civil War could have occurred there.

Ball's Bluff Battlefield Regional Park - It won't take too long to visit, perhaps an hour or two depending whether you make it there on a weekend for a guided tour, but it is well worth the time for the Civil War buff who loves to visit the actual sites of battle. And Ball's Bluff was such an interesting, and different, battle in many respects. Once you get past the sprawl, you'll be transported back to 1861 in a rough hewn environment and lots of interpretive signs. The small National Cemetery there is also a great reminder that the sacrifice of those to preserve our nation happened at many places, some very well known and others less so, and that every individual sacrifice made the same contribution to the United States and its continuation from the brink of a permanent split.

Take a walk with us from the river to the battlefield bluff where the Battle of Ball's Bluff took place in 1861, all narrated from the Official Records of the Civil War entry by CSA Colonel Nathan G. Evans. A unique look at the battle near Leesburg, Virginia, many don't think about, or gets enough visitation, in the beginning of the war told in someone's words who was there. 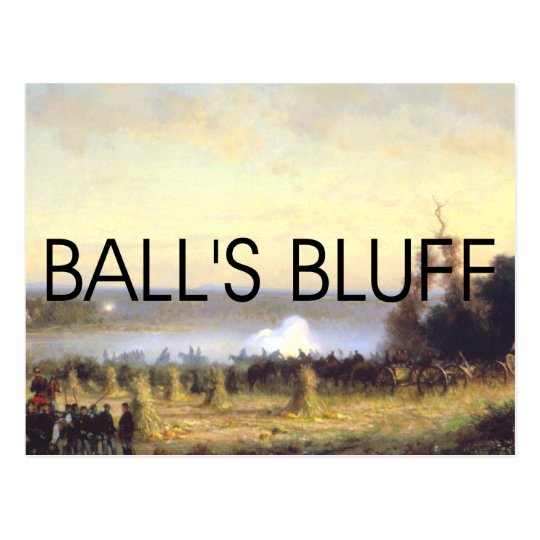 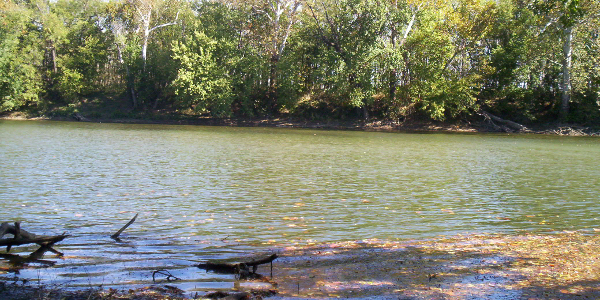 1. Take the Battlefield Interpretive Trail Loop. It's less than a mile and for the most part, chipped. There is some elevation. For a new park, the interpretation is great, with lots of wayside markers explaining what went on here. You can deviate off of that trail and go down to the river. Beware, this is a steep trail and should only be done by those with good shoes and health.

2. The Balls Bluff Walking Tour. If you arrive on a weekend from mid-April to November, you may get the chance to go on a guided tour. These are held at 11:00 a.m. and 1:00 p.m. and last from one to two hours. This tour will enhance your experience and understanding. Meet at the parking lot where a small seating group waits near the first interpretive signs. The tour is free. During the anniversay weekend, there are expanded tours, cannon demonstrations, and an evening illumination and ceremony celebrating the sacrifice the men who fought here.

3. Watch the great video on Balls Bluff, made available on Youtube.

Photo above: Potomac River at the confluence of the steep path taken by the soldiers to climb the hill to the site of the Ball's Bluff battlefield. 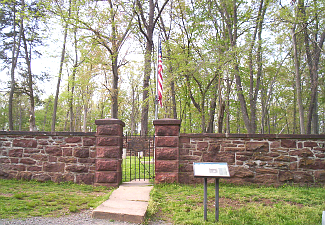 Interpretive Markers and Small Seating Amphitheatre - There are more than twenty interpretive markers, new within the last decade, that tell the tale of the battle. These are very good and informative. At the parking lot, a group of benches form a small amphitheatre for park interpretors at the beginning of the weekend battle tour. There is no visitor center here or facilities beyond one pit toilet. There are no picnic tables, at least when we visited.

Ball's Bluff Battlefield National Cemetery (photo above) - Located on the bluff overlooking the Potomac River, this national cemetery is the third smallest in the nation.

Walking Trails - There are a variety of walking trails through Ball's Bluff Battlefield Regional Park beyond the Civil War interpretive trail. There are six of them ranging in difficulty and length, from half a mile to more than two.

Other Smaller Civil War Sites Nearby - The area around Leesburg, Virginia has a number of smaller Civil War related sites close to Ball's Bluff, including Sugarloaf Mountain, White's Ferry, Edwards Ferry, Dranesville, Fort Evans, and Smart's Mill. There are also plantations that served as camps and headquarters that also tell the story of the times. Visit the Morven Plantation, Marshall House, downtown Leesburg, and the Oatlands Plantation to get a fuller view of what happened here. 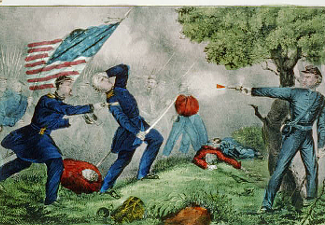 There is no lodging or camping within Balls Bluff Battlefield Regional Park, although there are plenty of motels, hotels, and other choices within the Route 15, Route 7, and Route 66 corridor toward Washington, D.C.

Several camping locations are available not too far away within the Chesapeake and Ohio Canal National Historic Park; Indian Flats, Calico Rocks, and Bald Eagle Island. They are walk-in sites and free. A private campground is located in Brunswick, Maryland, the Brunswick Family Campground, along the canal which is appropriate for tent and recreational vehicles.

Photo above: Depiction of the death of Colonel and Senator Edward Baker at Ball's Bluff. Lithograph by Currier and Ives. Source: Library of Congress. 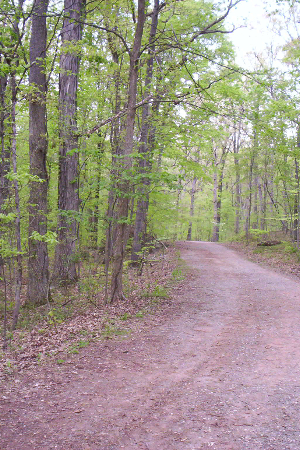 Route 7 West to Leesburg, then Route 15 Bypass North. Look for signs to the park, then take Battlefield Parkway east and a quick left on Ball's Bluff Road. Yes, you'll be driving through a development. It's at the end of that road. 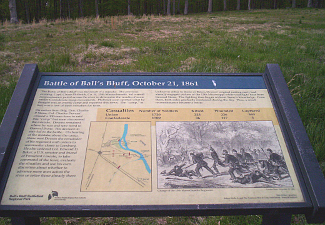