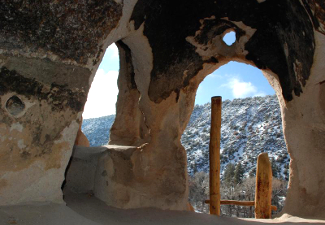 Ancestral Puebloan homes and structures in the Frijoles Canyon area are some of the best examples of southwest United States Indian dwellings, easily accessible from the main Visitor Center area. Whether you visit these trails and structures on a guided tour or on your own, you can climb into the cavates and imagine how the ancestors of the United States lived centuries ago. Bandelier is a treat for visitors, and not that heavily visited. While it now requires a shuttle bus trek from White Rock during the height of the summer season, which we're not too sure of the need, don't let that deter you. What you're about to see is worth that small inconvenience. And you'll be next to several other interesting parks and sites with a disparate calling; Los Alamos and the Valles Caldera Preserve. It's a wonder how all these amazing sites got grouped together. 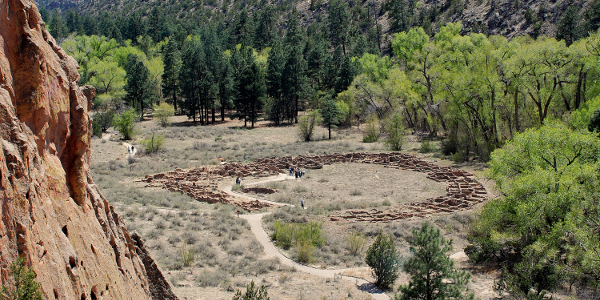 It's southwest culture of the most awesome kind. Yes, a landscape that rolls, and drops, along trails and vistas into canyons that have seen so much history. But it's in that history, those dwellings that sit along the mountainsides and the kivas in the valleys below that will take your breath away. Step back in time. Imagine the life that was lived here. Remove yourself from the phone and climb into a cavate. 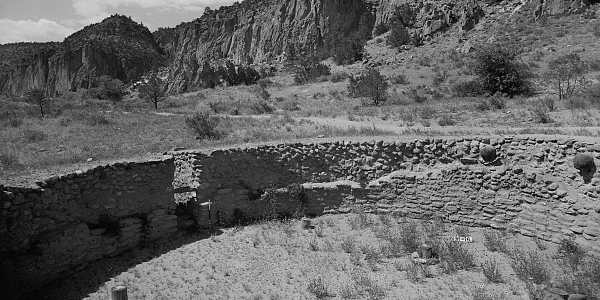 President Woodrow Wilson designated Bandelier a National Monument on Feburary 11, 1916, well before that was considered controversial. But there's no real controversy here about the history that has been preserved and witnessed for the past one hundred years.

Structures of the Puebloan people here date back to 1150. There are pueblo homes and ceremonial kivas used for four hundred years before severe drought made it impossible to grow enough crops on the mesa top and the Puebloans moved on. What they built and left behind is an amazing tapestry of life during that time, a lifespan that usually lasted only thirty-five years. The homes were built with volcanic tuff and mud mortar. Cavates, carved rooms, were also built behind the structures.

From 1916 until today, the pueblos and kivas of the Puebloan culture have been preserved, including Alcove House, one hunred and forty feet above Frijoles Cavern. It was home to about twenty-five at the time of occupation and previously known, as the 1940 photos show, as Ceremonial Cave. Talus House, which was reconstructed in 1920, and Long House, three to four stories tall with interesting petroglyphs, are but two other examples of Puebloan structures. Big Kiva, once roofed, was a communal gathering place. Talus, Long, and Big Kiva can be visited along the Main Loop Trail. Beyond the various structures, there are the natural features of the park where Frijoles Creek drops down two waterfalls toward the Rio Grande River. You can take the Falls Trail from the Overflow Parking lot to visit them; it's 1.75 miles to the Lower Falls, which may not yet be repaired and open for use past the Upper Falls. 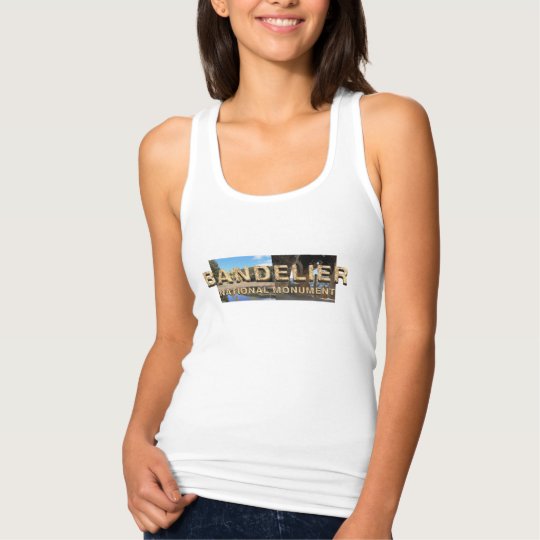 Bandelier National Monument T-Shirts and other history souvenirs from the official merchandise of America's Best History. 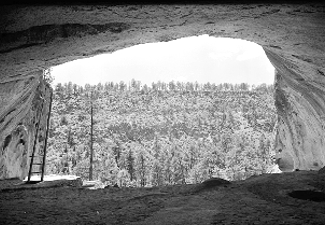 1. Visit the Bandelier Visitor Center. Exhibits, orientation, films, and ranger guided tours (summer). From here, you can take one of the many hikes to the main Frijoles Canyon ancestral sites. Remember, in summer, during the day, you must take a shuttle from the White Rock Visitor Center. We're not in favor of this, but it's required, and worth the trouble.

2. Take a hike. If you're able, you just have to take one of the main trails to the ancestral sites. The Main Loop Trail, 1.2 miles long will take you to the Big Kiva, Tyuonyi, Talus House, and Long House. It's a must. Probably take you an hour. The Alcove House Trail and Falls Trail are also popular. All told, there are seventy miles of trials in the park, with some up to ten miles long. Only do those hikes which you are capable of, and bring plenty of water.

3. If you're in Bandelier on a summer Saturday night, take in one of the great evening programs. Check at the Visitor Center or Juniper Campground for the schedule. On Thursday nights, there's the usual Night Sky, Explore the Stars, program at the campground amphitheater. And on special full moon nights, you can take the Moonlight Walk. Reservations required and a limited amount of spots for that.

4. For a special day, check out the Fall Fiesta, usually in the beginning of October. There are native displays, Pueblo arts, and more. 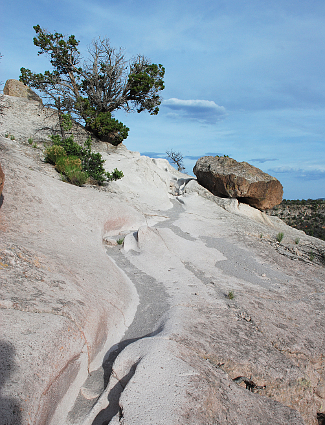 Bandelier Visitor Center - It's open all year with longer hours in the summer season when the shuttle is running. It's located in the main Frijoles Canyon area. There are exhibits on the Puebloan people, including two dioramas, and a film. Ranger tours are also conducted from here during the summer season. A gift shop and snack bar is also available in the area.

Tsankawi Section of Park - North of White Rock and not adjacent to the main part of the park, Tsankawi provides a different view of the culture and topography of the area. You can hike the Tsankawi trail. Entrance to here is included in your park pass for the main area of Bandelier. 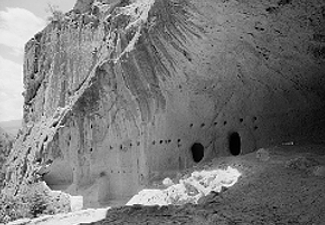 Well, it's too late to stay inside a lodge in the park. That was closed in the 1980's, but there are plenty of places to stay nearby between Bandelier and Santa Fe. Check with the lodging choices at your favorite online lodging site, or contact the local or state visitors bureau.

There are two campgrounds in the park. The main campground is Juniper, meant for individual camping and small groups. Juniper is located near the main entrance off Highway 4. It is appropriate for tent or RV and has restrooms and a dump station. The campground usually does not fill, but is available on a first come, first serve basis, except for the group sites that can be reserved. The Ponderosa Group Campground is located six miles from the entrance station on Route 4. Pit toilets only. Must be reserved. Backcountry camping is allowed, with permit, from the Visitor Center. Ask where appropriate trails and sites are considering the time of year you plan to camp.

Physical address of Bandelier National Monument is 15 Entrance RD, Los Alamos, NM 87544, although the park does not suggest using this for GPS. Not sure why. From Santa Fe, it's about an hour on Route 285/84 North, then right on New Mexico 502. Take the exit for New Mexico 4 and travel north twelve miles.

Although Valles Caldera is its own park, it's just down Highway 4 on the western end of Bandelier, and while you're at one, you should go visit this rather new expanse of volcanic land. A recent addition to the National Park Service system since 2015, but around since 2000, Valles Caldera has a visitor center, a volcanic past, upgraded facilities, though not many, and plenty of backcountry to visit. If you don't want to stay on the main road through the southern end of the park, or just pop up to the Visitor Center, you will need a good backpack or four wheel drive vehicle.