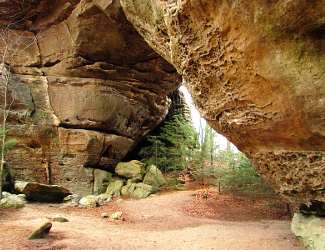 It's one of those National Park Service parks that most within five hundred miles don't know about, but that does not mean it's not popular with those who do. Over seven hundred thousand visitors now ply the waters, trails, and history of this park designated on March 7, 1974. And this area of the Cumberland Plateau with acres in both Kentucky and Tennessee is just awesome to behold and pretty fun to play around in. There's also a vibrant history tale to tell in the Blue Heron mining community. But, it's in the natural bridges and deep gorge cut into the mountains that will likely inspire you to visit, and keep coming back. You'll even get to know what a hoodoo is. Okay, we'll spill the beans for those who don't yet know. It's a tall thin spire of rock. Yes, that's geology, not history. We should probably stop now. 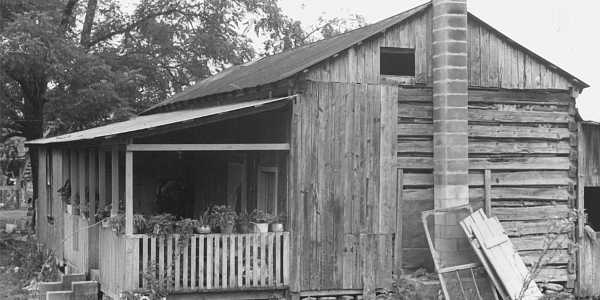 It is hard not to acknowledge what geology has done for this beautiful park. Basically, through centuries of the water of the Big South Fork River, a seventy-six mile tributary to the Cumberland River, a gorge formed. Man made the lake, or reservoir, it eventually flows into for hydroelectric power and flood control, Lake Cumberland, but that's outside the park. Once man arrived, it was likely home to Paleo-Indians with European settlement coming around 1769 when the area was inhabited by the Cherokee. Colonial settlement was rare, as the area was poor for agriculture and failed colonies sometimes began, i.e. Rugby 1880's, and failed.

After the Civil War, companies began to see the Cumberland Plateau for its mineral and timber riches. The Stearns Coal and Lumber Company of Ludington, Michigan identified the timber, and with access to the north flowing Big South Fork River and the Cincinnati Southern Railway, began to acquire land in 1899, thirty thousand acres. Their first mine opened in 1902. Unlike many mines in the upper South, the Stearns company employed a percentage of black workers.

The Blue Heron, Kentucky mine was opened in 1937, and operated until 1962. The community was isolated, with a company store, Mine 18, church, schoolhouse, and more. After it was abandoned, it fell into disrepair. Today there are no original buildings on site, but the town of Blue Heron has now been recreated in the park. 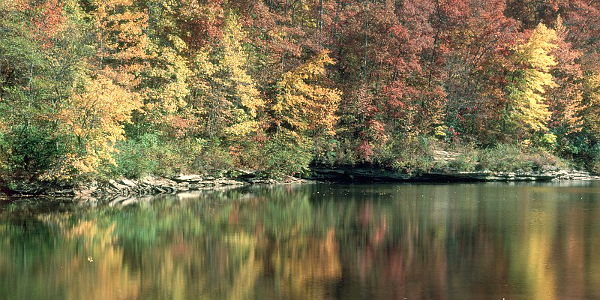 Today, Blue Heron is a recreated town that tells the story of the region in metal buildings on the approximate sites of the originals. Each building is themed with exhibits. At some times of the year, you can ride the Big South Fork Scenic Railway from Stearns to Blue Heron and get both the train and mining history experience.

Sightseeing around the park can be had both by car and by foot, and there's even wagon riding allowed. Trails are many and can be accessed by both experienced hikers and those who want tred a more leisurely pace with lesser round trip miles. Only hike or paddle where you are able. Paddling in the Big South Fork River area can be challenging at spots; again only paddle where you are experienced enough to handle those challenges to stay safe and enjoy your stay. 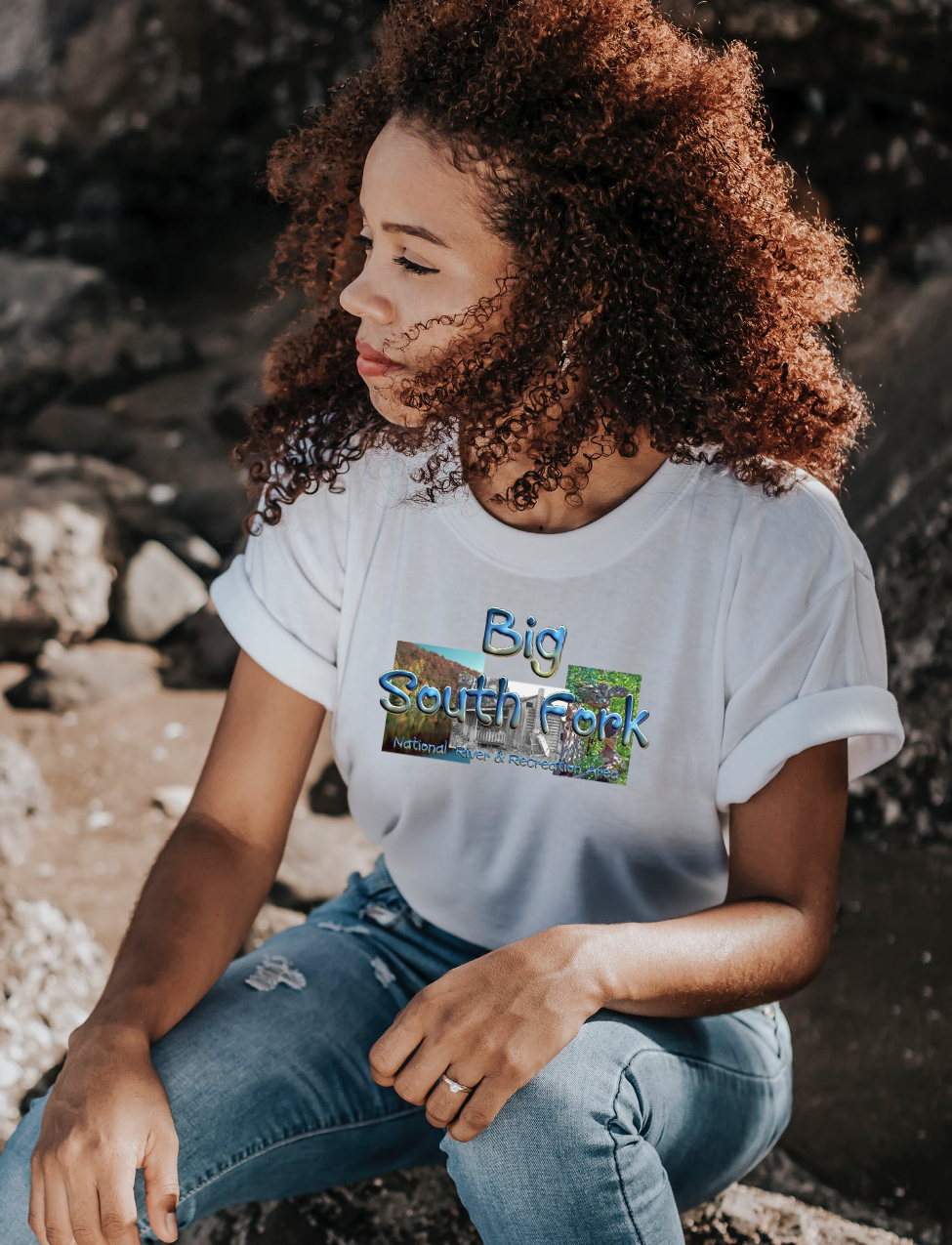 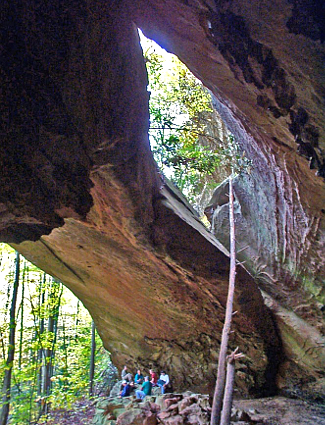 1. At special times during the height of the spring to fall season (May to October), take advantage of the Night Sky and Astronomy program at the Bandy Creek Visitor Center.

2. Hike. There are hiking trails from 1.2 to 7 miles in length, and you can backcountry camp along the way. Check for details about that. One of the easy trails, although not short at 3.7 miles round trip, takes you to the Oscar Blevins farm.

3. Take a scenic trian ride from Stearns to the restored Blue Heron mining town. It's a 45 minute ride, which stays one hour at Blue Heron, then returns. The Big South Fork Scenic Railway runs from April to early November around the Big South Fork area, but trains in bad weather may not make the full trip to Blue Heron. Check for details. Tickets (2019) ran $28 adults, $18 children (3-12).

4. Head to the water. If you like to paddle, the Big South Fork River and its tributaries have a variety of stretches from easy to hard. Only paddle where you have enough experience and there are outfitters in the area who will take you on a trip as well. There's a swimming pool at the Bandy Creek Campground for those that like more sedate pursuits.

Photo above: One of the backcountry pleasures with a party beneath, Russel Arch. Courtesy National Park Service. 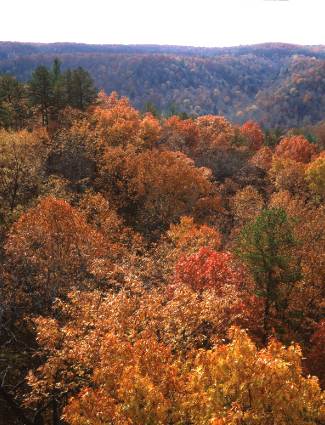 There are a variety of Visitor Centers located throughout the park, both in Tennessee and Kentucky.

Bandy Creek Visitor Center and Campground (Tennessee) - Exhibits, park orientation, tour and talk schedules, plus merchandise are located here. Open year round seven days a week. Campground can be reserved from April to October and is open year round. 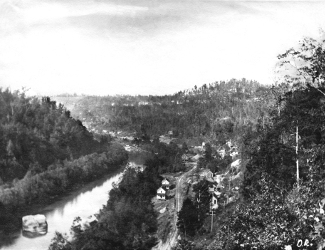 The headquarters of Big South Fork National River and Recreation Area is located at 4564 Leatherwood Road, Oneida, TN 37841. Oneida is approximately sixty-one miles from Knoxville, northwest, and will take a little over one hour to reach. The Bandy Creek Visitor Center and Campground is located off Route 297 on East Bandy Creek Road.

Photo above: Historic site of the Yamacraw Mining Community of the Stearns Coal and Lumber Community along the Big South River. Courtesy National Park Service.

Lodging - There's only one place to stay within the park and that requires a hike or horseback ride to access. The Charit Creek Lodge has five cabins, some sleeping up to twelve, and has a dining hall and lodge. These are primitive cabins. Rates range from $60-100 per person per night and includes breakfast and dinner.

For other lodging choices outside the park, check out your favorite online lodging site for the lodging type of your choice.

Camping - There are two main campgrounds in Big South Fork, the year round Bandy Creek Campground, 181 sites, some with water and electric, and seasonal Blue Heron Campground, 45 sites, water and electric available. Smaller campgrounds are located a Alum Ford (year round), plus two Horse Camps, Bear Creek (KY) and Station Camp (TN). Backcountry camping is also allowed; ask about the hows and wheres.

Photo above: Miners of the Cumberland Plateau area in a group photo. Courtesy National Park Service.