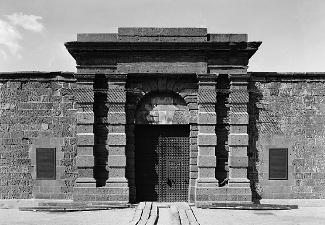 For such a small package, it packs a history wallop. Castle Clinton was the original immigration center for New York City, prior to Ellis Island in the center of the harbor. It was a fort, protecting Manhattan from the British in the War of 1812. It hosted some of the most entertaining ladies of the Victorian day in songstress Jenny Lind, as well as an aquarium. This castle and subsequent additions and subtractions on the same footprint has occupied this singular acre in Battery Park on the end of Manhattan, drawing visitors from abroad who wanted a life in the United States, and visitors from within, who wanted to witness the many pursuits available. And even though its history tends to take a back seat to the statue and immigration story in New York Harbor, it really does not take a back seat to anyone, or anywhere, in the stories that were told within its walls and how they grew the city and the nation. 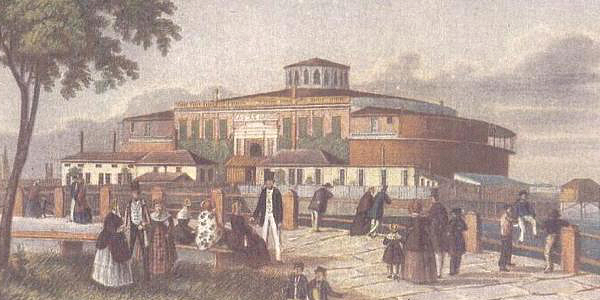 Southwest Battery - For three years prior to the War of 1812, the sandstone fort was built on an artificial island in the harbor. Subsequent landfill would attach it to the shore. The fort housed twenty-eight cannons and was in Army use until 1821. It never saw action.

Castle Garden Entertainment - On July 3, 1824, the complex, originally open air and later roofed, opened with exhibitions and concerts. These lasted through 1854.

Castle Garden Immigration Center - On August 1, 1855, Castle Garden opened as the first official immigration center in the nation. operated by the state until April 18, 1890, then replaced by Ellis Island in 1892. Eight million immigrants were processed through Castle Garden; two of every three in that time period.

New York City Aquarium - Opened on December 10, 1896 to thirty thousand visitors within a rebuilt Castle Gardens complex, the aquarium remained there until 1941. It was the city's most popular attraction, attracting at average of five thousand people per day.

1808 - Construction of the Southwest Battery begins.
1823 - Fort deeded to New York City.
1824 - Restaurant and theatre opened on site known as Castle Garden.
1850 - Swedish singer Jenny Lind made debut there.
1855 - Opened as main immigrant depot for the United States.
1896 - Building remodeled as the New York City Aquarium.
1957 - Aquarium moved to Coney Island after it had closed at Castle Garden in 1941.
1975 - Opened as Castle Clinton National Monument. 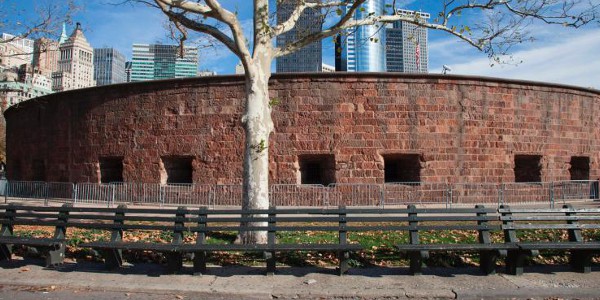 Saved from Demolition - Robert Moses, the powerful Parks commissioner for the city, swelled with confidence after the successful New York World's Fair of 1939-40 held in Flushing Meadows, wanted to tear down Castle Gardens and build a bridge from the end of Manhattan to Brooklyn. The public hated the idea. Eventually, the Federal Government thwarted it, with President Roosevelt claiming that bombing the bridge, if built, would block access to the East River and the Brooklyn Navy Yard. On August 12, 1946, Castle Garden was deemed a national monument. On August 28, 1949, the U.S. Senate allocated $116,750 to restore it to its original appearance.

Castle Clinton reopened on May 24, 1975 after thirty years, with a concert, Beethoven's 9th Symphony, set in the same location as its 1846 debut. The complete renovation cost $750,000 and the site opened for daily visits on June 20.

Today, you can visit the restored castle and hear the stories of its various eras in a guided walk, or just marvel at the view from its edge on a park bench. You can also jump on a ferry and check out the more famous Statue of Liberty and Ellis Island from here, but that's a tale for later. Castle Clinton has a prior and even broader story to tell. With tensions increasing between the United States and Britain in the early 1800's, northwest U.S. cities began to build fortifications. New York built four; Castle Williams on Governor's Island, Ford Wood on Bedloe's Island (Liberty Island), Fort Gibson on Ellis Island, and the Southwest Battery (name changed to Castle Clinton several years later) on Manhattan Island. The forts were never used in the War of 1812. And that's just the beginning. 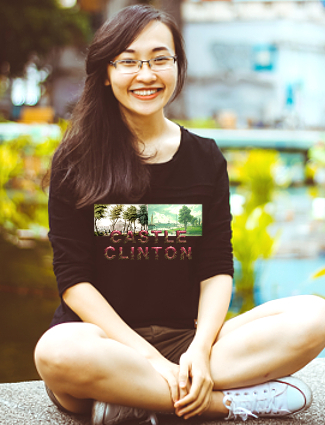 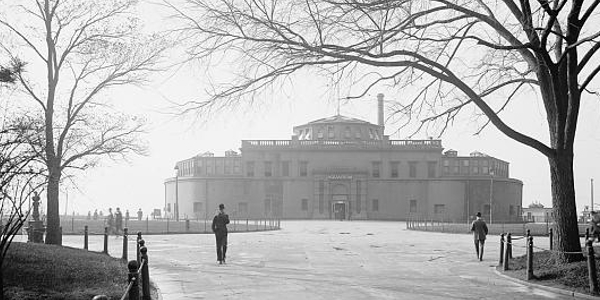 1. Take the Castle Garden tour. It's the best way to learn about the variety of uses this small area has had over the last two hundred years. You'll find out about its years as a fort, immigration center, entertainment venue, and aquarium, all from park rangers who know their New York history.

2. Take in a special program. This site in Battery Park is known for concerts. Not a whole lot better evening spent than on the waterfront listening to music.

3. Okay, take a walking tour of the park, fort, and exhibits, then head out to the Statue of Liberty and Ellis Island. You'll get the whole breadth of how immigrants made their way into the northeast United States all in one day, but spanning over one hundred years.

Photo above: Old Castle Garden as an Aquarium, circa 1900. Source: Library of Congress. 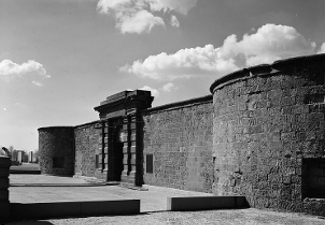 Castle Clinton
Now restored to its original appearance as a fort, Castle Clinton has museum exhibits, park ranger orientation, tours, and tickets to the Statue of Liberty and Ellis Island. It is 240' in diameter. Not big, but a whole lot went on there.

Battery Park - Twenty-five acres on the tip of Manhattan named for the batteries that protected New York City since its early days. Castle Clinton sits on one acre within the park. To visit Battery Park and Castle Clinton, public transportation should be taken as parking is almost non-existent and very expensive even if you find some. 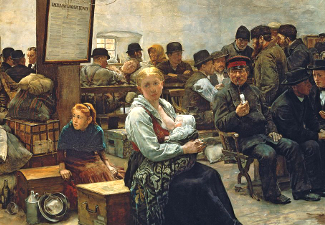 There are no lodging options inside the fort or Battery Park park itself, but there, of course, are plenty in New York City and the surrounding area. Check your favorite online lodging site for the lodging type of your choice. 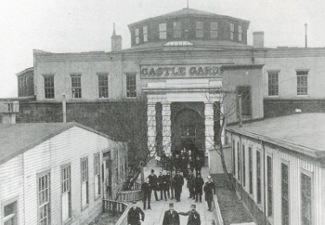 There are several walking tours of Lower Manhattan that start around the Castle Clinton and Battery Park area and focus on its history. The New Amsterdam Trail, the New York Freedom Trail, and Washington's New York are self-guided audio or brochure tours, although guided tours are also offered. Check with New York Harbor Parks for details.