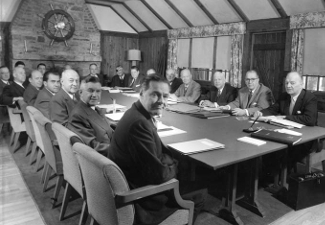 Sidled between two battlefields in Gettysburg and Antietam and only a bit more than an hour from two large population centers in Baltimore and Washington, there's a pristine mountain national park with an odd combination of being a hiker's paradise combined with presidential history. Yes, that's what Catoctin Mountain Park in central Maryland is summed it up in one notion. But, the presidential history, while intoxicating and important, can not be visited. It's Camp David, the summer mountain home of the President, resting within the park's pines. And the rest of the park is synopsized best by noting the amount of trails to hike, even though there's history along those paths as well. No, not presidential history, although some likely walked nearby, but the history of mining and whiskey plus whatever else the topography brought from the land to man. It was the home to mountain men, looking for a way to get their corn and rye to market who converted it to whiskey, because you could transport more of it in each wagon. It was the home of the charcoal industry, including the first forge in the area, circa 1770s, by Thomas Johnson, Jr., who would become the first governor of Maryland. Who were some of the customers of the Catoctin Iron Furnace? Try George Washington's Army when they needed cannonballs during the American Revolution. Try the Union Army of President Abraham Lincoln, where iron from the forge was made into plates for the ironclad Monitor during the Civil War.

For most, the history of Catoctin starts in the middle, when the Works Progress Administration saw it as marginal land and a demonstration area for various projects, included camps for federal workers. A presidential retreat would grow from this, out of World War II necessity, and the first trip of the president to what we know now as Camp David occurred on April 22, 1942. The Secret Service was concerned that President Roosevelt's yacht "Potomac" was not safe with German U-Boats about, so they commandered the camp originally built for other purposes.

So, Camp David was built under another name, Hi-Catoctin, by the Work Progress Administration between 1935-1938, and meant as a retreat for government workers. Once it became the President's personal retreat in 1942, President Franklin D. Roosevelt changed its name to Camp Shangri-La. President Eisenhower came in and changed its name again, to the current Camp David, after his father and grandson. All presidents have used the retreat since Roosevelt.

Photo above: The scenery from the overlook at Hog Rock. Photo courtesy America's Best History. Below: Photo of the main lodge at Camp David taken during the Nixon administration on February 9, 1971. Photo courtesy National Archives and Record Administraiton, White House Photo Office. 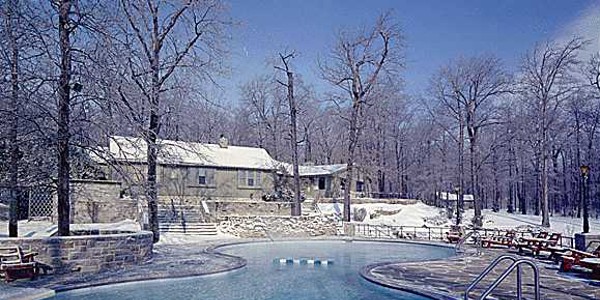 But what may have started as a special project and later retreat for all future presidents, is really an oasis of tall trees and great vistas spread around twenty-five miles of trails and over five thousand acres of ground that's open to the public for hikes and camps. There's also a state park called Cunningham Falls on the southern side of the road that expands all those trails to vistas including Cunningham Falls itself. And all this within a bit more than an hour drive from Washington and Baltimore. So if you're thinking about taking in some nature on a weekend and would like to walk about an area of beauty and history, then Catoctin might be a good option. But no, you can't visit Camp David. You'll have to be satisfied to know it's there somewhere.

For most, it's a place to hike and visit nature, and the history of the site a nice adjunct to the streams, trails, and falls. Exhibits about the history part of the park sit alongside many of the trails, both the history of the iron furnace and whiskey runners plus that of the Works Progress Administration and their effect on building the park.

This is a park that gets bypassed by many on their way to the bigger cousin Shenandoah. Perhaps, in some way, that's because it's private resident, the presidential retreat, Camp David, requires a less vibrant advertising campaign. Perhaps not. But a visit to Catoctin Mountain Park, will be a nice addition to your national park adventures. An addition many others will have bypassed.

Let's take an amble through the woods and Visitor Center at Catoctin Mountain Park, a National Park Service site near Thurmont, Maryland. It's also home to Camp David, but don't try to find it, they might shoot you. An ode to that however is the bluegrass music playing beneath the video, White House Blues by Charlie Poole and the North Carolina Ramblers. It has more to do with Teddy Roosevelt than Franklin Delano Roosevelt who had the park built during the CCC days, but Teddy started the park movement under the Antiquities, so what the hay. 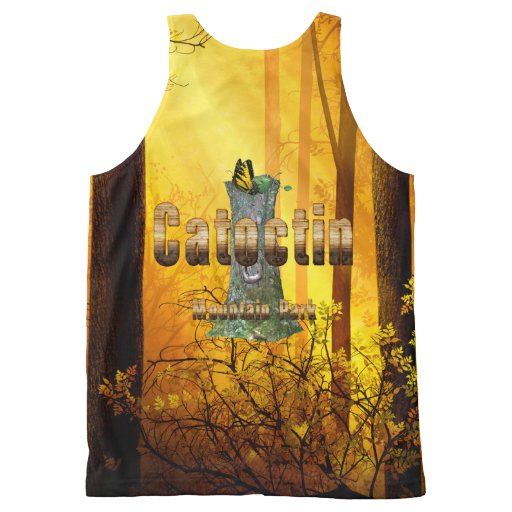 Catoctin Mountain Park T-Shirts and Souvenirs from the official merchandise of America's Best History. Great for your next Catoctin hike. 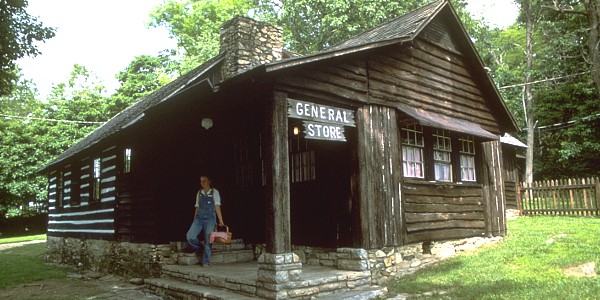 1. Head out the Blue Blazes Whiskey Still trail. It's less than a mile in length and accessed from the gravel parking lot to the west of the Visitor Center and you'll get to learn one of the way the historic men of the mountain made their living.

2. If you're in for another short walk to history, there's the Charcoal Trail, straight up the Visitor Center road before the bend left. It's only a half mile in length. Want a bit longer hike in the same area of the park that will get you to one of the vistas, then the Thurmont Vista Trail might be for you. It can be a one mile hike back and forth, or a loop trail of about 2.5 miles.

3. Two other trails that take you to overlooks of one, Pennsylvania, and two, Maryland, are the Hog Rock Trail and the Blue Ridge Summit Overlook. They spur off from the same parking lot in opposite directions. There are facilities and picnic tables there as well.

4. Take a ranger tour. Some, including the popular Fall Colors Walk, will take you to various parts of the park to learn about the nature and history of the Catoctin region. 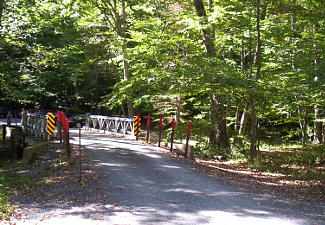 Trails, trails, and more trails. Photo above: Just one entrance to a trail west of the Visitor Center off Maryland Route 77.

The trails at Catoctin Mountain Park range in length, some under one mile, others over eight miles. Some range from the national park into the state park next door, Cunningham Falls, and take you to those falls. There are a variety of overlooks on the trails with vistas in all directions. There are no overlooks that can be driven to.

There are also exhibits in the Visitor Center to enjoy and ranger hikes during the spring to fall seasons. 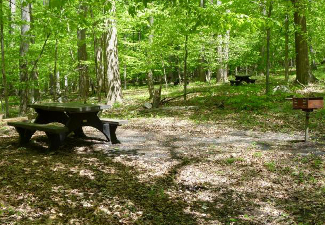 Catoctin Mountain Park is a relatively easy drive from the major cities of Washington, D.C. and Baltimore and just a thirty minute drive from Gettysburg. It's located off Route 15, which clips through the central part of the historic states of Pennsylvania, Maryland, and Virginia, basically taking you from Gettysburg to Monticello. From Route 15, take Maryland Route 77 West. Within a few minutes you'll be inside the park (to your right) with Cunningham Falls State Park to your left. The Catoctin Visitor Center is located several miles off Route 15 on the north side. Access to the campgrounds and other locations is predominantly through the road beside the Visitor Center.

You can not access Camp David. It is technically a military base, Navy, and off limits to all civilians. There is no indication on park maps of its actual location. 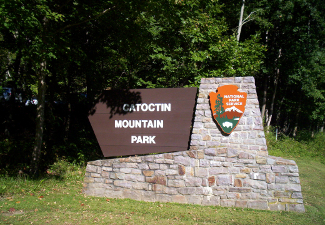 Catoctin Mountain Park has a variety of cabin and camping options, most for groups, and some for regular folks. Camp Misty Mount, Camp Greentop, and Round Meadow has group cabin facilities. Included in Camp Misty Mount are also cabins for the general public. Much of the facilities at these camps are have WPA history. Camping for the public is located at the Owens Creek Campground; there are 50 sites there. Poplar Grove is the youth group camping site. There are also two Adirondack shelters for hike in campers.

For those more into the motels and bed and breakfasts route after your hike or visit, there are only a few in the closet town, Thurmont, including a Super 8, but many more in surrounding towns. Check out your favorite online lodging site for the lodging type of your choice.

Photo above: Park sign at the entrance to the Visitor Center off Maryland Route 77.