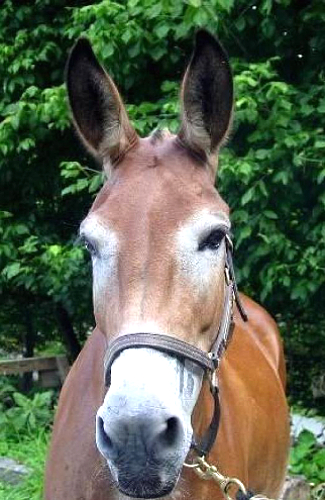 Above: Mule at the Chesapeake and Ohio Canal. Photo courtesy of the NPS and the mule. Right: The canal at Fifteenmile Creek. 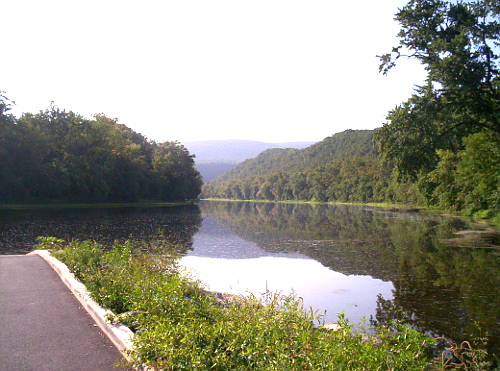 From the Georgetown section of Washington to the mountains of Maryland stretches a canal that at one point moved commerce across the 184.5 miles of water from western settlements to the capital and now moves hikers, bikers, and tourists along the marvelous intact waterways for recreation, camping, and history. It's a varied journey along its path as you wind your away along the route of the Potomac River into the mountains, running directly by historic sites such as Harper's Ferry, plus those of the canal and its seventy-four lift locks and historic lockhouses themselves. And tons of folks do just that each year, in fact, millions, and some of them probably don't even realize that they're quite there, in a history steeped in providing the nation it's bounty as it grew, and in a time when a helmet on a bike rider would have seemed, well, ... a luxury. 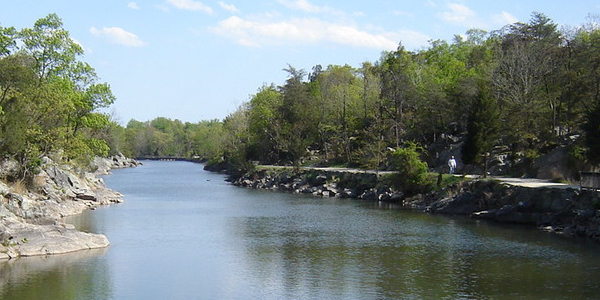 Chesapeake and Ohio Canal Then

A canal system near the capital was a brainstorm of George Washington, who thought that a series of canals connecting the east with the Great Lakes would be great for the expanding nation. His past as an engineer for the British in building the first roads to Pittsburgh may have had something to do with that. In 1785, he founded the Potowmack Company, who built five skirting canals around the falls on the river. Some of these canals would be included, later, in the Chesapeake and Ohio Canal. When John Quincy Adams finally proposed and began the project, it was intended to go all the way to the Ohio River. After twenty-two years of construction, and a cost of $11 milllion, the canal was halted at Cumberland, Maryland. Tolls were collected for the passage of goods, ranging from 1/4 cents to 2 cents per ton per mile. How much was transported? In 1914, for example, 171,062 tons of coal made the trip. Today, you get to witness that length from your car, bike, or feet, and imagine the times when Washington envisioned the waterway to the men and women who patrolled it with coal in their coffers on the way from the mountain mines to the capital. And it will likely take you less time to do that, well, maybe by bike and car, but not by foot, than the fastest canal boat on record, sixty-two hours.

Construction - The canal was begun on July 4, 1828 by President John Quincy Adams and took twenty-two years to build out all the way to Cumberland, Maryland. The intent to go further to the Ohio River did not come to pass. It was built at a width that two canal boats could pass each other simultaneously. There were eleven aquaducts built and seventy-four lift locks to account for the 605' elevation change from one end to the other. The Paw Paw tunnel may have been the most impressive engineering feet on the length of the canal, dug 3,118 feet under the mountains. The tunnel took 12 years to build by itself. It is located between Hancock and Cumberland. The first section of the canal, from Georgetown to Seneca, opened in 1830.

Operation - It took seven days to bring coal from Cumberland down the entire length of the canal to Georgetown, with the boat family moving eighteen hours a day. How much did the family earn for their trip? Try $15 for the week with some reports, due to inflation, of $80 by 1924. Eventually, however, the Baltimore and Ohio Railroad cut into the profit and use of the canal. When a flood damaged the canal in 1924, it ceased operation. The Chesapeake and Ohio Canal became a National Park site in 1971.

Photo above: Wide water along the Chesapeake and Ohio Canal towpath. Courtesy National Park Service. Below: Early morning view of the towpath at Antietam Creek Campground. 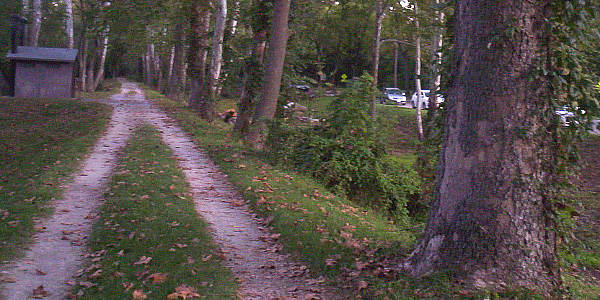 The Park - Opened in 1971, the park quickly became a favored place for recreation and history in the mid-Atlantic corridor. The canal wanders from the busy suburbs of the District of Columbia, i.e. Georgetown, to the beautiful scenery of the Maryland mountains. For the adventurous, taking a walk or bike ride along part or all of the miles within the historical park, can be a treat, with camping spots all along the length of the journey. History is interpreted at the various visitor centers, as well as boat rides for the public. It's also a great place to pull out that kayak and ply the waters for yourself. 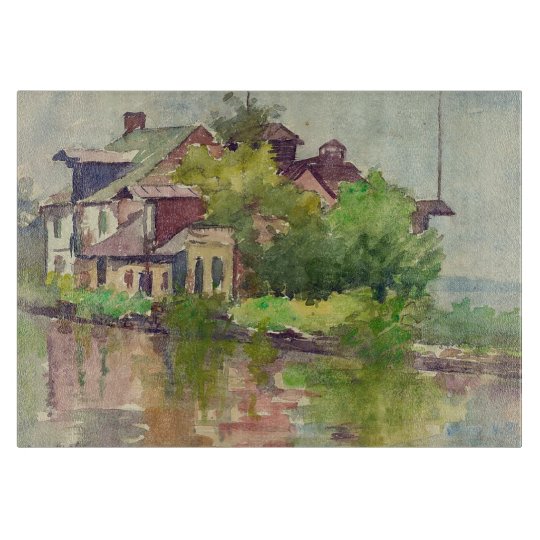 Chesapeake and Ohio Canal NHS T-Shirts and Souvenirs from the official gear of americasbesthistory.com. 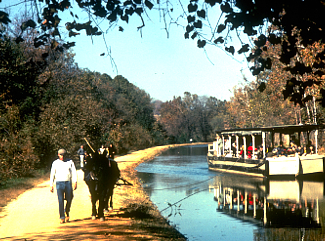 1. Take the opportunity to camp along the canal, whether that be by hiking in to one of the more remote campsites situated six to eight miles apart or at one of the five motor in campgrounds. They're well maintained and in some areas, a quiet and remote location to spend the night along the water.

2. Take in a ranger hike. There are several locations along the Chesapeake and Ohio Canal where you can take advantage of the knowledge of the park service staff and learn more about the history, mining, the Great Falls, and the Paw Paw Tunnel. These are predominantly serviced from the Great Falls Visitor Center and the Williamsport Visitor Center. The Paw Paw Tunnel tours are available in the summer only. Check at the visitor center for times and locations of the tours.

3. Stay in a canal lockhouse. We were told you can do that.

Williamsport - Once considered by George Washington as site for the capital, the visitor center in open year round. Includes the Cushwa Coal and Brick Warehouse and Lock House 44.

Cumberland - Exhibits including the model of the Paw Paw Tunnel.

Visitors Centers (Seasonal) - Some of these visitor centers close at Labor Day, while others are open more into fall and open earlier in the spring. Check the NPS website for dates and times.

Photo above: Harper's Ferry. The canal runs directly alongside the river there. Great place to hike.

Photo above: Harpers Ferry along the Canal in a period image. Courtesy National Archives. 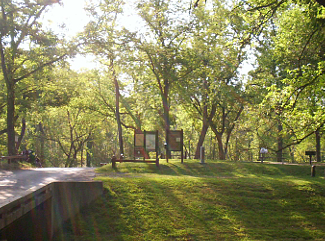 Lodging - Washington to Cumberland
Of course, Washington, D.C., and the Georgetown area where the park begins on its eastern side is filled with a variety of choices as you would expect. As you move along its path, it becomes a more varied lot, although there are plenty of accomodations along its path, whether it be in Hancock, Cumberland, or otherwise. Check the local tourist board, or hotel/motel site for the choice that's right for you.

Camping - One of the great pleasures of a visit to the Chesapeake and Ohio Canal is its marvelous campsites within the park, ranging from pack in by hike or bike sites or the motor in campsites at Antietam Creek, McCoys Ferry, Fifteenmile Creek, Paw Paw, and Spring Gap. RV's only allowed at McCoys Ferry, Fifteenmile Creek, and Spring Gap. There is a charge for camping at the motor in sites. The fee is sometimes waived in winter (late October to March), but check at the host board when you get there for the individual times and charges.

Photo above: One of the motor in campsites at Fifteenmile Creek. 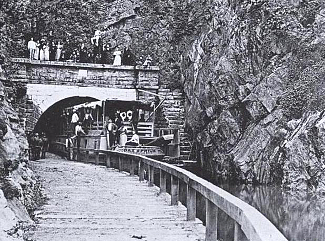 The Antietam Creek Campground is located only four miles from the Antietam Battlefield, and a perfect place to camp when visiting the park. Campsites there are on the berm between the canal and the Potomac River. They are well spaced with vault toilets, water pumps, picnic tables, and grills. There is access to the river at Antietam for your canoes and kayaks.

There is no charge for the hike or bike in sites, of which there are 30 stretched along the 184.5 mile stretch of the canal, located every 6-8 miles.