Discounts are given for AAA members.

There are three main Museum Sites in Cooperstown: Baseball Hall of Fame, Fenimore Art Museum, and Farmer's Museum. Ask about discount tickets that are available if you buy tickets for more than one. 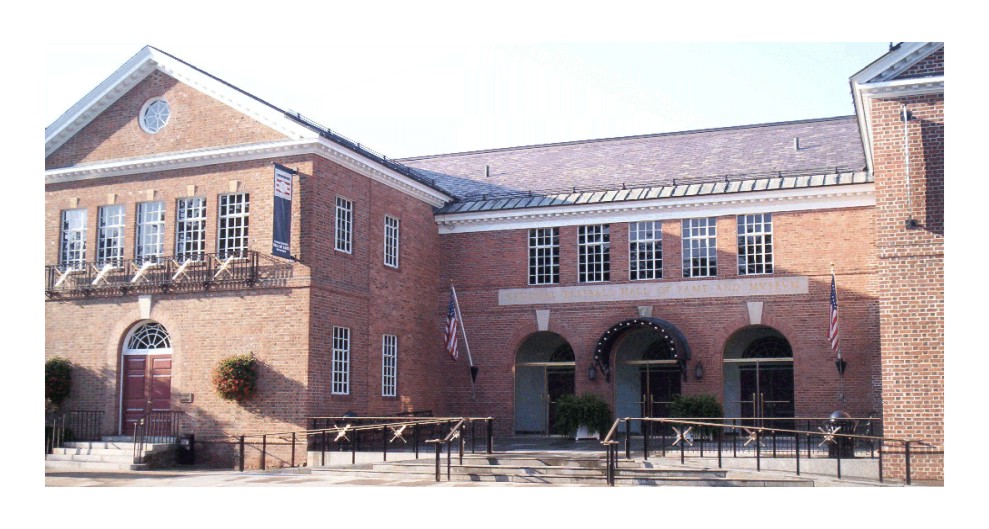 When the National Baseball Hall of Fame set up shop in the quaint New York hamlet of Cooperstown in 1939, the museum only cemented the town in American historic lore that had begun over one hundred and fifty years earlier, in 1786 with its founding by William Cooper. Born of the pristine Otsego Lake made famous by native son James Fenimore Cooper in his Glimmerglass tales, including his most noted work, "The Last of the Mohicans," Cooperstown encompasses some of the most precious historic tenants of any town in the United States. Baseball Hall of Fame - Established in 1939 to honor the best players in baseball history, the National Baseball Hall of Fame includes a variety of exhibits within its expanded galleries. From the Grandstand Theater to the Cooperstown room all the way to the Women in Baseball Exhibit and the Hall of Fame Plaques, the Baseball Hall of Fame will envelope even the most casual fan into the legacy of the game that has enveloped the nation with its rich history for the past one hundred and fifty years. You don't have to be among those armed with knowledge about the debate on its founder (Abner Doubleday or Alexander Cartwright the two most likely) or whether the sacrifice bunt is appropriate when playing one run down on the road in the last inning to know that what you are witnessing here within the brick walls of this stately museum in Cooperstown is the past history of the United States in a pure fashion, one many wish we could return toward. The three floors of exhibits cover the entire history of the game, from the Major Leagues inception in 1871, whether that be National, American, Pacific, or Negro, through the final out of last year's World Series.

Farmer's Museum - Past the main entrance to the Farmers' Museum, a large collection of 1840s buildings saved from various sites around the state represent a village and farm circa 1840. A large display inside the farm show structure covers the history of Otsego Lake and its inhabitants with a second floor showroom of farm implements and machinery. Once outside, you can marvel at the reconstruction of these historic buildings and the historic reenactments of handicrafts and such things as hops harvesting, plus special exhibits throughout the year.

Fenimore Art Museum - Housed in a stately 1930s mansion with porticos that overlook the clear water of Otsego Lake and the fairways of the Leatherstocking Golf Course, the Fenimore Art Museum, under the direction of the New York State Historical Association, includes a grand collection of American folk art, including the Eugene and Clare Thaw Collection of American Indian Art. You can also see the memorabilia associated with author James Fenimore Cooper among its collection. 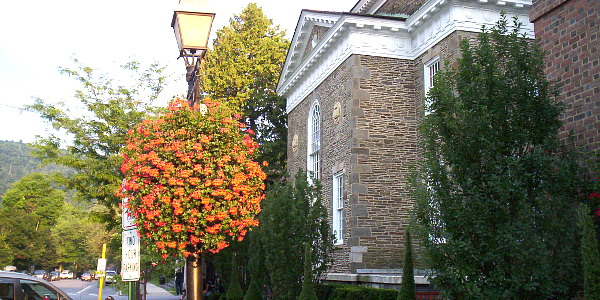 A calm born before shopping malls and McDonald's permeates the village. There are no chain stores or franchise restaurants in the town by the way, with nary a few on its outskirts. There are streets and avenues that radiate from the crystal clear waters of the lake up into the center of town, with bed and breakfast inns, coffee shops and restaurants with local flavor aplenty, and the history of New York and baseball on every street corner. But don't mistake the calm and hanging baskets of gorgeous flowers as signs that there is nothing to do here. Or that the plenty to do is all about the national pastime. There are days of enjoyment here for the Native American historian, the baseball fan, and the fans' wife.

Touted with the slogan as "America's Most Perfect Village," Cooperstown, New York fills the senses with a era of historic past, from the history of Native American culture on display at both the Fenimore Art Gallery, the Farmer's Museum, or in the hills that surround the Glimmerglass Lake, to that game of nine played from Major League ballparks to the Little League fields in every town and now the Cooperstown Dreams Park tournaments held here each summer at one of the top youth baseball facilities in the nation. Whether you love the game of the past played prior to baseball gloves, or the game of youth baseball working toward their dreams of being a professional one day, there's a ton of baseball related opportunities here in the pristine village of Cooperstown. And there is also culture here as well, as seen in the art galleries and Glimmerglass Opera, plus hiking trails and state parks nearby that can take the outdoors enthusiast through the history of the land.

The Baseball Hall of Fame and Museum. Newly refurbished in the past decade.

Trolley Transportation. For a single daily fee, you can park on the outskirts of town, ride the trolley's around the quaint streets of Cooperstown, and never see your car from sunup to sundown. The trolleys take visitors from the downtown area of shops, restaurants, the Hall of Fame and Doubleday Field to the attractions along the lake, including the Fenimore Art Gallery and the Farmer's Museum.

Glimmerglass Lake Tours. Along the waterfront below the Cooperstown main street, tours on Lake Otsego embark from the wharf.

Inns and hotels with a history all their own. Whether you like to be pampered at some of the most historic hotels in the area, including the AAA four diamond resorts of Otesaga Resort Hotel, the Cooper Inn, the Mirror Lake Inn, or other lesser touted inns, on virtually every street corner sit Victorian mansions turned into bed and breakfast lodgings.

Other nearby attractions include Howe Caverns and the National Soccer Hall of Fame in Oneonta, New York, thirty miles south. 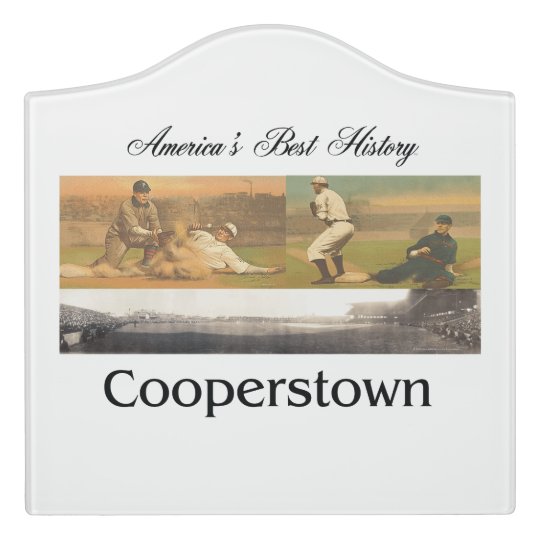 Cooperstown Baseball T-Shirts and Souvenirs from the official merchandise of America's Best History. 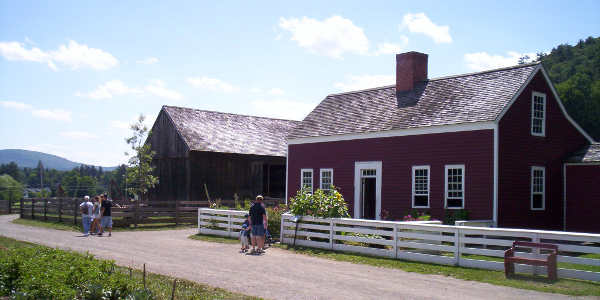 1. Let's not kid ourselves. If you're making a trip to Cooperstown, you are interested in the history of baseball. And no historian or fan of the national pastime is going to pass up the National Baseball Hall of Fame and Museum. The museum is a treat, containing not only the Hall where the plaques of each player enshrined into its confines fill the walls, but thousands of exhibits, plus a multi-media show that starts the proceedings. The Hall of Fame is open for long hours, and even the passing fan will spend half the day in its galleries.

2. For those looking for a bargain, check whether the Hall of Fame is holding its Free Evening proposal during their extended summer months. The Hall is traditionally open from 9:00 a.m. to 9:00 p.m. from Memorial Day to Labor Day, and in past years, if you bought your ticket after 7:00 p.m. one evening, you can visit the next day for free. This gives the fan an extra few hours to wander its halls, plus a break for those not quite as interested.

3. Make sure to take in some of the interactive programs in the Bullpen Theatre where museum staff conducts programs such as the Recreate a Radio Broadcast. Great for children, this program allows them to take part in the historic past when radio announcers would recreate each game of the season.

4. Be one of the few visitors to the Farmer's Museum to hike the Mt. Orvis hill behind the main village. There you will find the Seneca Log House, from the Tonawanda Reservation, which represents a traditional Seneca Indian dwelling from 1780. You'll be surprised by the way it looks.

5. Take a leisurely stroll through town. Whether this is at twilight or in the middle of the day, take time to follow in the footsteps of James Fenimore Cooper (pictured above) or Abner Doubleday (yes, this was the reason why the Hall of Fame was located here) as you wander around the streets of their home town. Around every corner, the turn of the century residences, and older, will keep you wondering just how lucky it is for the residents of this town of two thousand people that they live here.

6. The Historic Hyde Hall. Located north of town in Glimmerglass State Park, this neo-classic mansion with fifty rooms overlooking Otsego Lake, is undergoing renovation, which can be witnessed by visitors.

Photo above: Scene within the streets of the Farmer's Museum.

Photo Above: Statue of Roy Campanella in rear courtyard of the Baseball Hall of Fame, Cooperstown, New York. 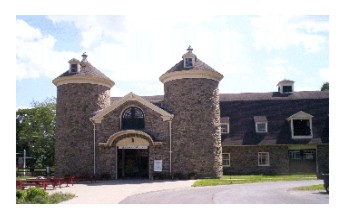 Photo Above: Large entrance to the Farmer's Museum, but it's certainly not all for farmers. Complex includes many historic buildings from around the state of New York that were slated for demoltion and now moved, restored, and placed within the village of the Farmer's Musuem. 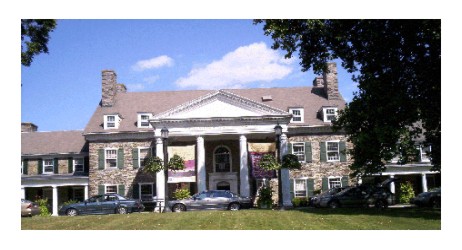 Exterior of the front portico of the mansion housing the Fenimore Art Museum just north of the town. 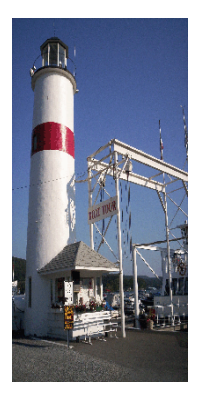 There is plenty of lodging in the town of Cooperstown, but don't expect the traditional off the Interstate hotels and motels. Most of the lodging within the confines of the town are quaint bed and breakfasts, high end tourist hotels from the time of the turn of the century, and smaller motels along the lake and elsewhere. There are some of the chains located on the roads going to and from Cooperstown.

Plenty of camping sites are within a half hour or so drive in private and public campgrounds. Check the tourist bureau of Cooperstown and other travel sites for the lodging or camping that best suits your needs.

Photo Above: One of the first inhabitants of the Hall of Fame, the best baseball player in history, Babe Ruth. Courtesy: Library of Congress.

Traveling around Cooperstown and the State of New York in your RV, then check out our friends at Your RV Lifestyle and their article on things to see there, recreational vehicle style.