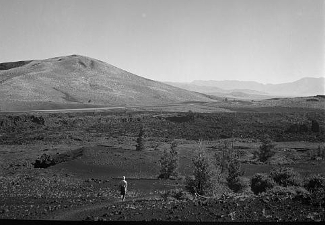 Photo above: Craters of the Moon photo from 1942, Russell Lee, Farm Security Administration, Office of War Information. Courtesy Library of Congress. Right: The moon above the landscape beside the Southern Butte. Courtesy National Park Service. Craters of the Moon National Monument and Preserve

Cones and caves might not say it all, but it carries a good bit of verbal weight. And these natural features have been protected since the 1920's with a landscape that reflects its name, long before anyone touched down on the actual moon. The cones here have unique names; Sunset, Grassy, Silent, and Inferno to name a few. The caves don't take a back seat either; Dewdrop, Buffalo, Boy Scout, and Beauty. Nothing like an adventure through nature's carved and flowing landscape and at a fraction of the traffic the better known Yellowstone and Grand Teton will put you through. Craters is a definite must on a western national park vacation that take you near those two. Take a detour to it on the way to or from. 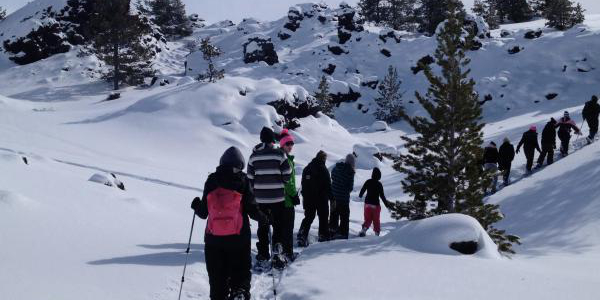 This is a place of stark natural beauty with the cones and craters at elevations in the six thousand foot level. And if you are part of a venture into the cave sort of crew, be wary that these are not paved tourist oriented caverns. They are rough, without pavements, and can be icy and cold. That's what makes them so neat though. Of course, some will want to come in the winter and take a more snow approach, eschew the caves, cones, and ski through Idaho's bounty. 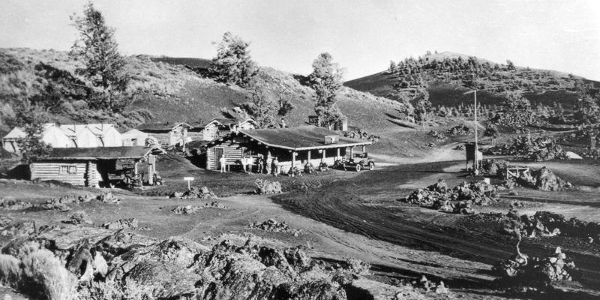 Craters of the Moon Then

Fifteen million years ago, lava flowed here from volcanoes. The features you see now are from a more recent time, two to fifteen thousand years ago. In Indian Tunnel, there are remnants of the stone rings built by the Shoshone prior to white settlement of the west.

It was 1924, May 2, when President Calvin Coolidge preserved 22,651 acres of what is today's National Monument. Today there are sixty lava flows and twenty-five cinder cones represented in the monument within over seven hundred thousand acres, plus a unique feature in the north part of the park, Goodale's Cutoff from the Oregon Trail. Tim Goodale had brought over one thousand settlers and three hundred thirty-eight wagons across that in 1862 after gold was found in the Salmon River. By the way, the Great Rift of Idaho that caused the volcanic activity is still activity, so it will likely erupt some time in a thousand year future.

A unique part of the more recent history of the park occurred on August 22, 1969 when the Apollo 14 astronauts (Alan Shepard, Edgar Mitchell, Joe Engle, and Eugene Cernan) came to the park to explore and learn geology as they were about to take part on their mission to explore the features of the real moon.

Craters of the Moon Now

Today there are five caves to explore at Craters of the Moon. Four are located along Cave Trail, and with a permit, you can explore them. Dewdrop is small and can be seen from the trail. Indian Tunnel is large with ceiling gaps that allow light. You can access this cave through a stairway. Summer guided tours are available for this one. Boy Scout Cave is icy year round. Beauty Cave has a three hundred foot tunnel after you scramble down some rocks. The fifth cave, Buffalo, is located down Broken Toe Trail. Caution should be used at all caves, but perhaps, especially at Buffalo where there have been numerous collapses.

For the more pedestrian adventures, there are hikes that don't require spelunking, visitor center exhibits and films, plus the Loop Road to drive and see most of the above ground wonders. 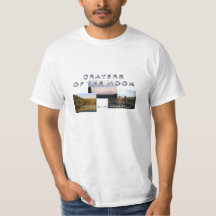 Craters of the Moon National Monument T-Shirts and other history souvenirs from the official merchandise of America's Best History. 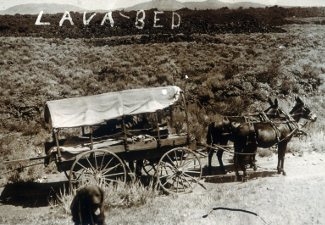 Craters of the Moon

1. Take the Loop Road drive. It will bring you past seven sites in the Non-Wilderness area that captures the breadth of what Craters of the Moon is all about. Yes, all those cones from Sunset to Silent and the caves of Buffalo and Dewdrop. The road is seven miles long with lots of trails spreading off from it.

2. Take a hike. If you're able, the trails at Craters of the Moon span from the Loop Road and take you up and personal to the features of the park. They range from a quarter mile to four miles. One of the best takes you to the the caves of Dewdrop, Indian Tunnel, Boy Scout, and Beauty. You'll need a cave permit to enter them. A guided tour of Indian Tunnel is available during some summer days.

3. For those looking for a more rugged adventure. If you've got a four wheel drive vehicle, ask how you get to the Preserve portion of the park. Backcountry hiking through sagebrush and lava flows might be the treat you are looking for, but it's not for the inexperienced.

4. Watch the Visitor Center films "A Trip to the Moon" and "Craters of the Moon" which are available on the hour and half-hour.

Photo above: Wagon passing nearby Craters of the Moon National Monument. Courtesy Library of Congress. 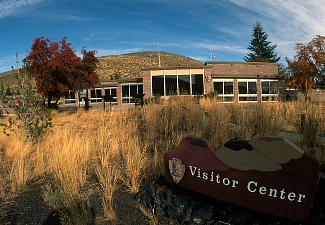 Craters of the Moon Visitor Center - Located off the main highway at the start of the loop road, the visitor center has exhibits, films, a bookstore, vending machines (no other food in the park besides what you bring), and restrooms. It is open year round. Ranger tours are also conducted from here during the summer season. 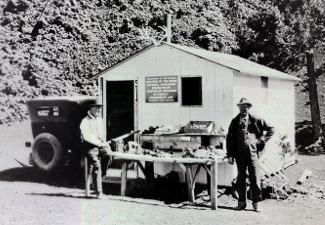 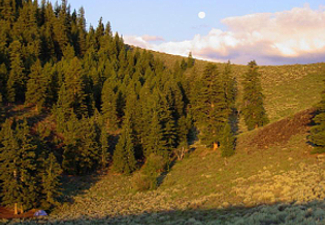 There are no lodges or places to stay at Craters of the Moon. Closest motels, hotels, inns, and bed and breakfasts are available in Arco, eighteen miles away. Check with the lodging choices at your favorite online lodging site, or contact the local or state visitors bureau.

There is only one regular campground within the park, plus a group campground. The main campground, Lava Flow, is near the Visitor Center. It has 42 sites, is open from mid-April to October, and does have restrooms and water. The Group Campground is not quite one mile away on the north side of the highway near Sunset Cinder Cone.

Photo above: Moon above the fir trees near the group campground at Sunset Cinder Cone. Courtesy National Park Service.

Physical address of the Visitor Center is 1266 Craters Loop Road, Arco, Idaho 83213. It's eighteen miles southwest of town off Route 20/26/93 and twenty-four miles northeast on the same road from Carey, Idaho. Idaho Falls is eighty-four miles away with Twin Falls ninety miles. 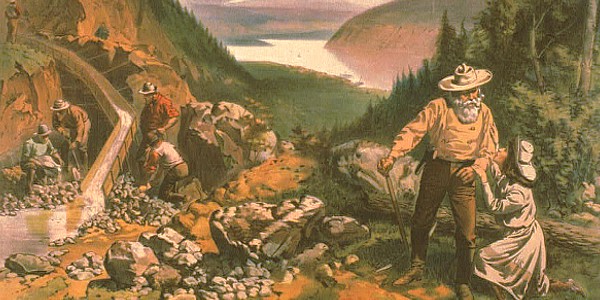 Craters of the Moon Links

Craters of the Moon National Monument