Picture of the tattered flag that flew over Fort McHenry during the British bombardment in September 1814. 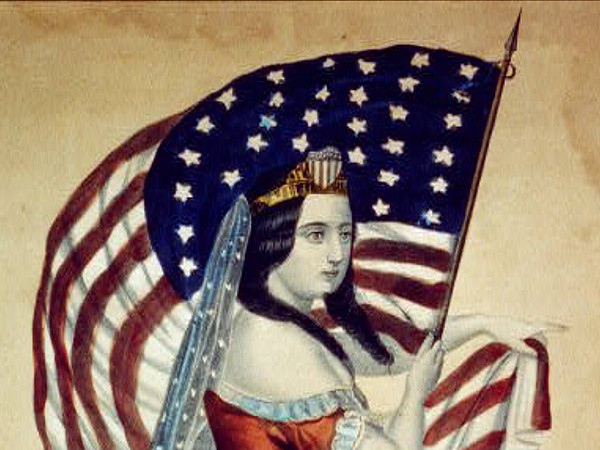 For most, a trip to the Baltimore Harbor has more to do with fish, fun, and perhaps a baseball ballgame at Camden Yards. But for history and importance to not only Baltimore, but the nation, the original reason to travel to Baltimore is tucked a bit down the harbor from those popular attractions, where during the War of 1812, a bombardment ensued by the British fleet against the fort that protected the city and inspired a national anthem to be written. Oh, say, does that star-spangled banner yet wave. O'er the land of the free, and the home of the brave.

Francis Scott Key wrote those words from the deck of a ship as he watched the American flag wave from the parapet pole atop the fort. His inspiration has continued to inspire each patriotic citizen of our country from that moment forward, sung at school assemblies, on national holidays, and yes, even at that next baseball game of the Baltimore Orioles at Camden Yards.

The location for the fort on Whetstone Point had been used as a defensive position during the Revolution when earthen works were built in case of an attack which never came, but the citizens of the area knew that a solid fort would eventually be needed for Baltimore's defense. Fort McHenry was constructed from 1899 to 1902 with the popular star shaped design, unknowing that those stars would come into play in a totally different way a dozen years later. Its location at the top of Baltimore Harbor was important, as it would serve as the defense of a growing city and important seaport. Fifty thousand people called Baltimore home in the early 1800s. As the early years of the century progressed, the war engaged between France and Great Britain began to escalate and pull the United States into a fray, predominantly because its ships would be confiscated by one or both sides as they shipped goods to each country. Some sailors were confiscated and made part of the British Navy. Some politicians thought that the British were also encouraging Indian attacks in the West. Eventually, the United States declared war on Great Britain in June 1812 to protect "sailors rights and free trade," and also began to encourage private ships to capture British merchant ships, turning many in Baltimore into pirates. Thus, Baltimore became a target for attack during the war, and with its proximity to the new capitol in Washington, a likely one, too.

Francis Scott Key was by chance on a British warship during the night of the bombardment, visiting a prisoner, Williams Beanes, with John S. Skinner, with the permission of President James Madison. The prisoner had been taken by the enemy and was agreed to be released, but the three men were still on the warship when the bombardment of Fort McHenry began on September 13, 1814. It continued throughout the day and night, and with the smoke and haze so thick, it was impossible to know who had won the battle. The next morning, about 7 o'clock, there was a break in the mist, and Key looked over the harbor to witness the American flag still flying over Fort McHenry. The one thousand defenders of the fort had withstood the barrage. Key quickly took out a letter from his pocket and wrote the words to the song on that paper.

Francis Scott Key - Key stood on a boat in Baltimore Harbor looking out toward the American flag that withstood the bombardment of the British Navy from the Patapsco River. He would write the words of the national anthem with inspiration from that site.

The drawing below right is a rendition of what Fort McHenry looked like during the Civil War. In many ways, with the exception of the structures to the left, the site looks similar to that today. What happened during the Civil War there. It was manned by Union troops, who turned the guns of the fort toward the city to warn Baltimore residents against joining the Confederacy, and served as a Confederate prison. 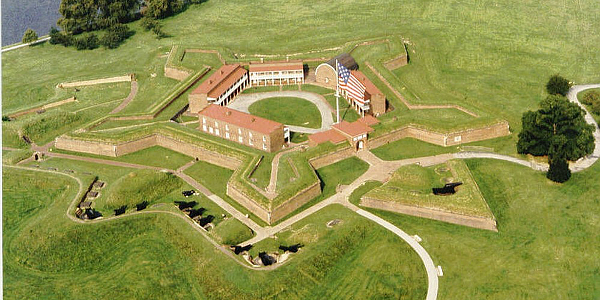 The Star-Spangled Banner - It would take over one hundred years from the morning of September 14, 1814 before the song was officially recognized by Congress as the national anthem in March 1931. Its words, written in minutes once Key saw the flag still waving above the fort has music composed by John Stafford Smith added to it. Even though it is acknowledged that the words to this song take the major part, Smith's contribution to the effort may be one of the most unsung contributions to an American classic in history. What is sung today is but a brief verse of the classic, which actually includes four stanzas. We sing the first today. At the time, the song became famous the next day with printing on handbills and was sung in public by actor Ferdinand Durang only a few days after.

The Fort at Fort McHenry - Located on Whetstone Point along the Patapsco River, the fort has seen many incarnations since its construction over two hundred years ago. Beyond its most famous moment in the War of 1812, the fort was used as the largest military hospital in the nation during World War I when over one hundred temporary buildings were built on its grounds to care for wounded soldiers returning from Europe. 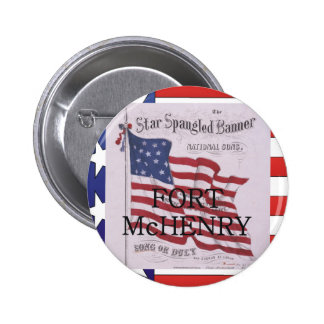 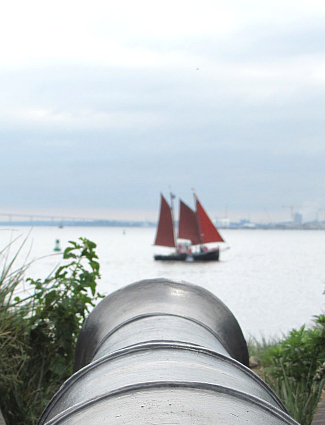 1. Take the park ranger tour of the fort. The tour begins near the visitor center and winds up the path to the large star-shaped fort. From the parking lot, the size of the fort does not seem this large. But as you walk its parapets and gaze over the horizon to the distant water of the harbor and river to the spot where the warships bombarded this position, you begin to feel just what Francis Scott Key must have felt. When you look back at the American flag (not the original) that flies that day, it is a powerful experience. The flag is now commissioned through a presidential proclamation in 1947, to fly twenty-four hours a day as a perpetual symbol of Ameican patriotism.

2. Sit on the grass of the historic site and take a few minutes in a peaceful pose. As the ships ply the waters of the river and move toward downtown, it is a beautiful scene that should not be missed in the bustle of the day.

3. Take advantage of the exhibits and video inside the new Visitor Center. You'll get oriented to the history and site as you wait for your tour to begin.

Photo above: View of a cannon peering out a portal of Fort McHenry toward ships in the Patapsco River in similar position to that during the British battle for the fort. Courtesy National Park Service. 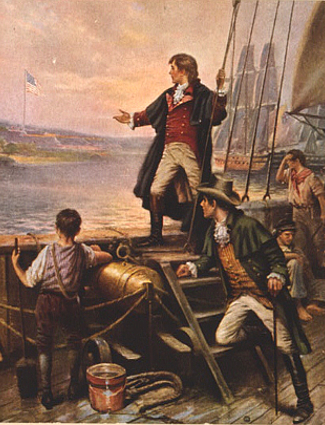 History of the Fort, the War of 1812, and the Star-Spangled Banner

Fort McHenry National Monument - Inside the gates of the Fort McHenry complex, there is plenty of parking for visitors and a fine visitor center with exhibits and a film. The fort itself sits on a hillside above the parking lot and center, looming almost on the horizon. The fort is a very intact installation, with a central courtyard, the parapets with guns pointing out into the harbor, and storage beneath.

Other National Historic Sites in the Baltimore Area - Baltimore has many attractions that are historic, although most of the visitation to the area is now based on the tourist center of the Aquarium and harbor. One that is not is a national historic site called Hampton. This mansion and grounds is an almost forgotten addition to the Baltimore landscape and will add a peaceful step back in time is you choose to visit.

Photo above: Francis Scott Key standing on ship in Baltimore Harbor looking toward the American flag. Courtesy Library of Congress. 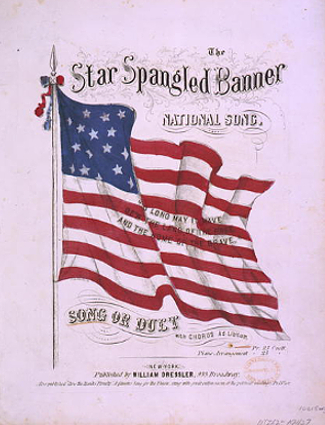 Baltimore - Baltimore is now a town that caters nightly to the tourist trade with the popular Baltimore harbor, the Aquarium, Camden Yards, and other attractions not too far from the Fort McHenry area. Lodging can be expensive in that location, but becomes less so on the outskirts of town. Check the local tourist board, travel sites, or your favorite hotel/motel chain for a range of prices, location, and features.

Photo above: A program for the Star-Spangled Banner. Courtesy Library of Congress. 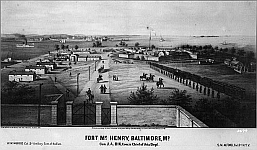 Image above: The drawing is a rendition of what Fort McHenry looked like during the Civil War. Courtesy Library of Congress. Below: Find out more about Baltimore's own, Babe Ruth, at Stat Geek Baseball, where baseball history takes flight. 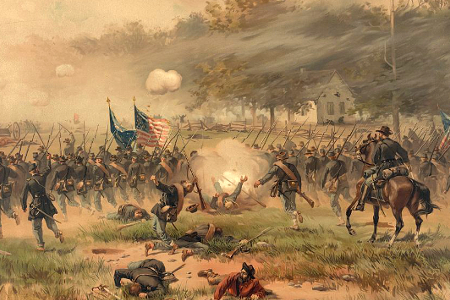