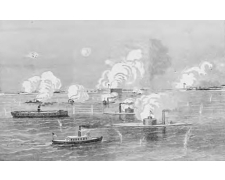 The sketch above shows the bombardment of Fort Sumter and Charleston harbor by Confederate gunboats, originally published in Harper's Pictorial History of the Civil War, 1894. Right: Lithograph of Fort Sumter. Image courtesy Library of Congress. There were many causes to the Civil War. Causes of state's rights, hinging on the the predominant debate of whether slavery would be expanded into new territories of the United States and whether that expansion would give one side or the other, south or north, an advantage in that debate on new legislation. But no matter the actual underlying rationale for why the nation would go to war over the issues of the day, there is no denying the fact that when Abraham Lincoln won the presidential election of 1860 in a four way contest with three Democratic candidates, who split the vote and gave victory to the Illinois Republican, that the nation, as we knew it, would be doomed, without a conflict to resolve those issues. Lincoln did not believe in the expansion of slavery into the new territories, stating, "A house divided against itself cannot stand. I believe this government cannot endure permanently half slave and half free." 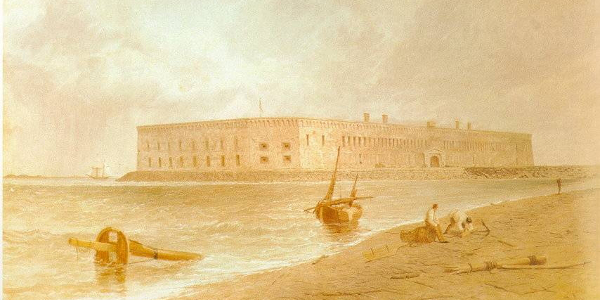 Fort Sumter was the location where that debate came to its initial head. The first shot should have been directed toward Fort Moultrie, another Charleston harbor fort in Union hands when South Carolina announced its secession, but Anderson moved his defense to Sumter in the days following Confederate proclamations by General Pierre G.T. Beauregard that the Union surrender the forts. The first shot of the Civil War was fired into Fort Sumter at 4:30 a.m. on April 12, 1861 by a Confederate battery.

Four months after the state of South Carolina to secede from the Union, the decision of Union commander Major Robert Anderson to hold firm and not surrender this fort would secure the movement toward war. The next four years would be spent in a deathly struggle to answer the questions posed, test the will of a people on what that answer would be, and secure the fate of a nation.

December 20, 1860 - 169 South Carolina delegates vote to secede from the United States of America.

April 14, 1861 - Fort Sumter evacuated by Union troops after 34 hours of shelling. Major Anderson and his command were allowed to keep their weapons and flag.

Aftermath of the Battle - Not only did the bombardment lead to the capture of Charleston harbor by Confederate forces, but it left a shambled fort behind. The Union bombardment of the location for the twenty months after April 1861 did not help as well. End of the War - On April 14, 1865, two days after the surrender by Robert E. Lee at Appommatox Court House, the United States held a flag-raising ceremony at Fort Sumter with now General Robert Anderson returning to the fort where he began the war in defense of the forts. 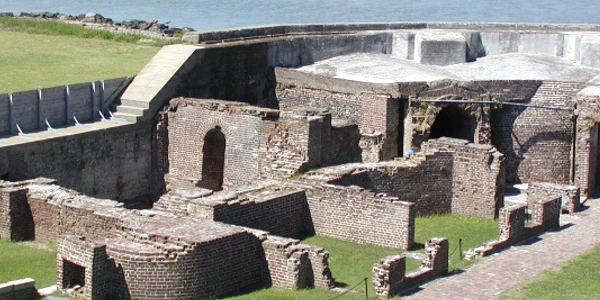 Fort Sumter - Start your tour of Fort Sumter at the Visitor Education Center downtown. This will help put the battle there in context prior to boarding the ferry for your actual visit to the fort. At the fort, museum exhibits, cannons, and a walk around this historic fort at the entrance to the harbor offers a chance to visualize the battle that started four years of Civil strife. Fort Sumter and Fort Moultrie were part of that four years of strife, too, withstanding a twenty month bombardment by Federal ironclads and shore guns from April 1863 forward. Confederate defenses held during that span, but southern troops would eventually evacuate the city of Charleston in February of 1865, leaving both forts behind.

Fort Moultrie - This fort is a unit of Fort Sumter and located on Sullivan's Island. It is accessible by car and contains exhibits, ranger guided tours, and a whole lot of history dating back to the Revolutionary War when this first fort on Sullivan Island was attacked by the British and repulsed by Colonial forces. Its history contains the story of American defenses of the coast from 1776 to World War II. This was the fort, in disrepair and less defensible that Fort Sumter, that Union Major Anderson and his men abandoned on the night of December 26, 1860 to take up the defense of the harbor from Fort Sumter. Unfortunately, access to Fort Sumter itself is not available from Fort Moultrie. 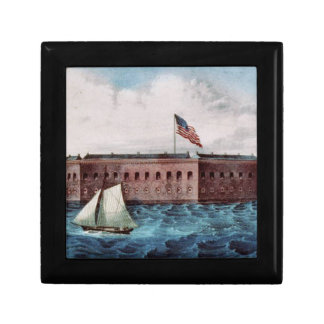 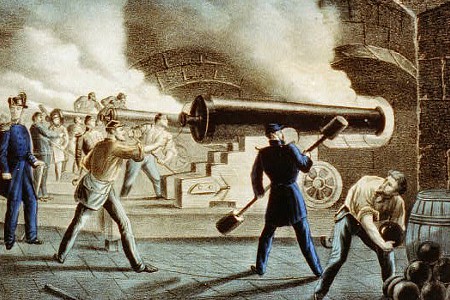 1. Visit the fort. It is the highlight of any tour of a historic site to stand in the spot where the action happened. For those eight-five men with Major Anderson who stood within these walls for two days of attack from the Confederate batteries, you can attempt to imagine the feeling and site of the battle that raged around them. The thirty-five minute cruise around Charleston harbor on your way to and from the fort is a nice bonus to the trip as well. One warning, there is no food at the fort itself, although the ferry does have snacks.

2. Take in the exhibits at the Visitor Education Center downtown and don't forget to walk around downtown Charleston to get a flavor for the city today, but also the sites that were there in 1861.

3. Drive over to Fort Moutrie for exhibits, ranger tours, and a look out into the Charleston harbor. Hopefully it will be a sunny day as you peer from the cannon perches pointing toward their historic targets.

Photo above: Lithograph of cannons firing from Fort Sumter. Courtesy Library of Congress.

For those taking the ferry tour of Fort Sumter from Patriots Point, the Maritime Museum there includes many exhibits on maritime topics, from the USS Yorktown to aircraft from World War II to Desert Storm. Besides the ferry tour to Fort Sumter, there are other chances for longer excursions around the harbor. Check some of these when you board the ferry, or at other sites in the city.

Photo above: View of the interior of Fort Sumter in 1865. Courtesy Library of Congress.

Charleston is a city full of history, from the Charles Pinckney National Historic Site to Boone Hall Plantation to the Aiken-Rhett House, and many more. There is also an IMAX theatre across Liberty Square downtown. Check out the various sites at the Charleston Convention and Visitors Bureau.

Charleston - While there is no lodging or camping at Fort Sumter National Monument, Charleston is a city with many lodging opportunities, from bed and breakfasts to standard hotel and motel chains.

Photo above shows the ceremony and guests in attendance at the April 14, 1865. 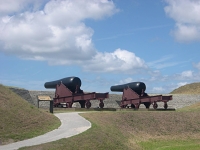 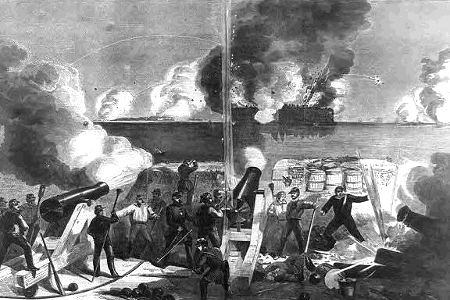