Other State/Local French and Indian War Sites to Visit

Fees subject to change without notice 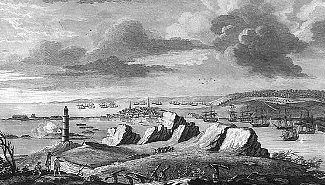 Above: Sketch of lighthouse in 1758 British siege of Louisbourg, Canada. Source: Library of Congress. Right: Stockade/Fort at Fort Necessity. It's almost as if it didn't happen, this war that preceeded the American Revolution, yet curiously included the American general who would win it against the side he played for in the French and Indian Wars. Yes, George Washington once played for the British and wanted to rise in their army, even though his first blush at battle in 1754 would, in a way, preclude that and he would remain an aide as part of the Virginia militia. But we're getting too far in front of the story here. The story was about empire and whether the French or the British would control territory in the new world, and beyond when you include the campaign of the Seven Years Wars, of which this was part in an international sense. You see, at the time, the British controlled the eastern seaboard and the French, Canada and the Mississippi. They both thought they owned the midwest and territory in between. Of course, the Indians had a lot to say about that, too, in territories that were sparsely populated, which was most of it. And they made treaties, although with so many tribes, just how far did they go and what did they mean. French and Indian War Then

The French and Indian Wars began in 1754 and lasted until 1763, so we're only talking a little more than a decade prior to the American Revolution. In the early 1750's, the Ohio Company, which wanted to control the land (200,000 acres) they were granted in the Upper Ohio River Valley of the Appalachian Mountains, also desired to settle the area and started to build an 80 mile road from Cumberland, Maryland west to the Monongahela River. Problem is, the French were there. They wanted to control the land from Canada to Louisiana and had been pushing south from Fort Niagara and claiming land in the Ohio River valley.

Historic Dates of the French and Indian War

May 28, 1754 - Battle of Jumonville (Pennsylvania). Surprise attack by Washington against French forces starts the war.

August 3-9, 1757 - French capture Fort William Henry (New York) after a six day siege. This is the battle described in James Fenimore Cooper's book, the Last of the Mohicans.

July 26, 1759 - British take Fort Ticonderoga when the French abandon it after losses nearby. They blow up the power magazine prior to leaving (New York).

September 8, 1760 - British capture Montreal and letters of surrender of Canada are signed.

May 9, 1763 - Pontiac, the chief of the Ottawas, with a coalition of Pottowatomie and Huron tribe members, siege Detroit. Additional Indian forces spread the campaign east, capturing eight forts.

August 5-6, 1763 - Pontiac's Rebellion reaches into Pennsylvania at the Battle of Bushy Run, which ends in a British victory.

Summary of Key Battles and Sites

Battle of Fort Necessity - Barely a month after the opening battle at Jumonville, George Washington had built his fort in a meadow out of necessity, and thus, it's name. It wasn't much of a fort, actually a small stockade with a storehouse for materials. Washington had 293 men there, and got 100 British troops as reinforcements. The French, mad about the defeat at Jumonville, sent 600 men and 100 Indians toward the fort. On July 3, 1754, they clashed. Fighting continued for much of the day, through a hard rain, and a truce was negotiated, which included Washington's withdraw back to Virginia. Casualties for Washington's men and the British troops were greater than those of the French. Fort Necessity was burned. This would prompt the British campaign, including Braddock's attempt to capture Fort Duquesne in 1855.

Delaware Water Gap - During the time of the French and Indian War, there were 3,000 settlers in the area of the upper Delaware River Valley. The Delaware Indians did not like this and attacked settlements in Lehighton and Stroudsburg in 1755. In response to this, the colonial governments of Pennsylvania and New Jersey built several forts and blockhouses to defend them. Two were built in Pennsylvania and up to 6 blockhouses were built in New Jersey. Fort Johns, in New Jersey, and within the National Recreation Area, is being investigated for its archaeological value with wayside exhibits upcoming in the park.

Fort Niagara - The history of the fort, due to its location at the mouth of the Niagara River and site along the Great Lakes, is varied, with importance in the French and Indian War, including the 19 day siege in 1759 from July 6 to 25 which led to British control, the American Revolution when it was held by the British throughout the war then ceded to the USA in 1796, and the War of 1812, when the British recaptured it.

Image above: Engraving of the defeat of General Braddock in Virginia, 1755, in the French and Indian War, 1855, John Andrew. Courtesy Library of Congress. Below: Fort Stanwix. Courtesy National Park Service. 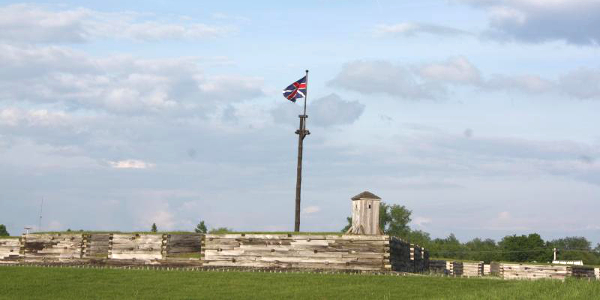 Fort Necessity - The small recreated fort sits in a meadow where the men of Washington fought against the French and Indian forces in the woods. There's a very nice visitor center with film, book store, and exhibits. Fort Necessity is south of Pittsburgh in the Laurel Mountains. This park also includes the battlefield of the first clash at Jumonville (north of the main part of park) and the site of Braddock's grave. General Braddock was killed at the Battle of the Monongahela (8 miles south of their intended expedition, Fort Duquesne) one year later on July 9, 1755.

Fort Stanwix - The National Monument at Fort Stanwix tells two stories; that of the reason it was built (to shore up defenses of the British in the area during the French and Indian War), as well as its role in the American Revolution, including the siege of 1777. There is a visitor center and guided tours of the fort, plus three walking trails. Ask at the visitor center about the guided tours. 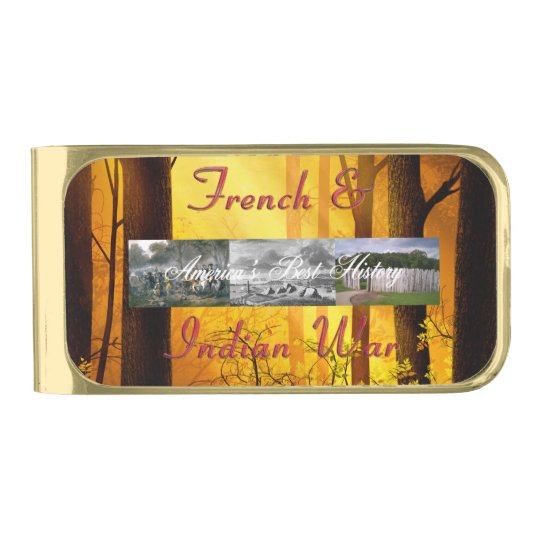 French and Indian War T-Shirts and Souvenirs from the official merchandise of America's Best History. 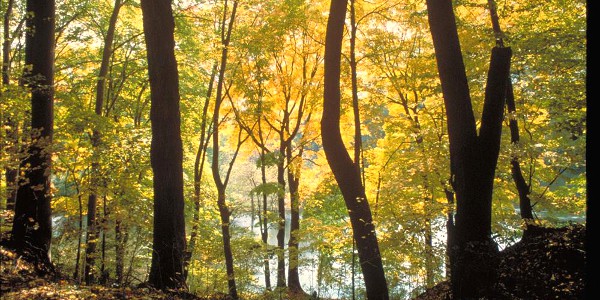 1. Take the park ranger tour of Fort Necessity. It's a pleasant walk through the woods to the meadow where the small fort now stands. The visitor center is only several years old and contains a movie and good exhibits about the battle, plus the National Road. The park ranger will likely tell you the story about how Washington once wanted to be a British regular soldier, but things did not turn out as planned.

2. Travel to Fort William Henry and see how the book and movie, "Last of the Mohicans" differs from the real story. Your guide, in military garb, will explain how the 1750's were here at the fort.

3. Take a golf cart tour. Yes, at the Bushy Run Battlefield you can take a tour by foot, and, at times, by golf cart. On the tour you'll discover why the Indian chief Pontiac continued his fight even after the French treaty surrender. They didn't like that the French won and feared, if they didn't strike immediately, they'd be subject to British rule forever. It was kinda true. This is one of the few French and Indian War historic sites that deals with Pontiac's rebellion and unique in the fact that it is not really based on a fort, but the battlefield, which is pretty much intact.

4. Take a hike. No matter where you might French and Indian roam amongst the many historic sites, take a few moments to reflect on what life was like during the 1750's, twenty year prior to the American Revolution. There are places like at the Delaware Water Gap where the rivers and area get quiet enough for you to imagine. Nothing like using your imagination before we all are wearing virtual reality headgear and never leaving our couch.

Photo above: One scene along the Delaware River at Delaware Water Gap NRA.

Who Fought for Whom 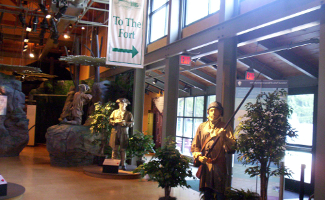 The French and Indian War was fought over the vast portion of the northeastern United States, midwest USA, and Canada. Each location has its own tourist board that can help you with lodging and camping options in the area.

Photo above: Interior of the Visitor Center at Fort Necessity National Battlefield. 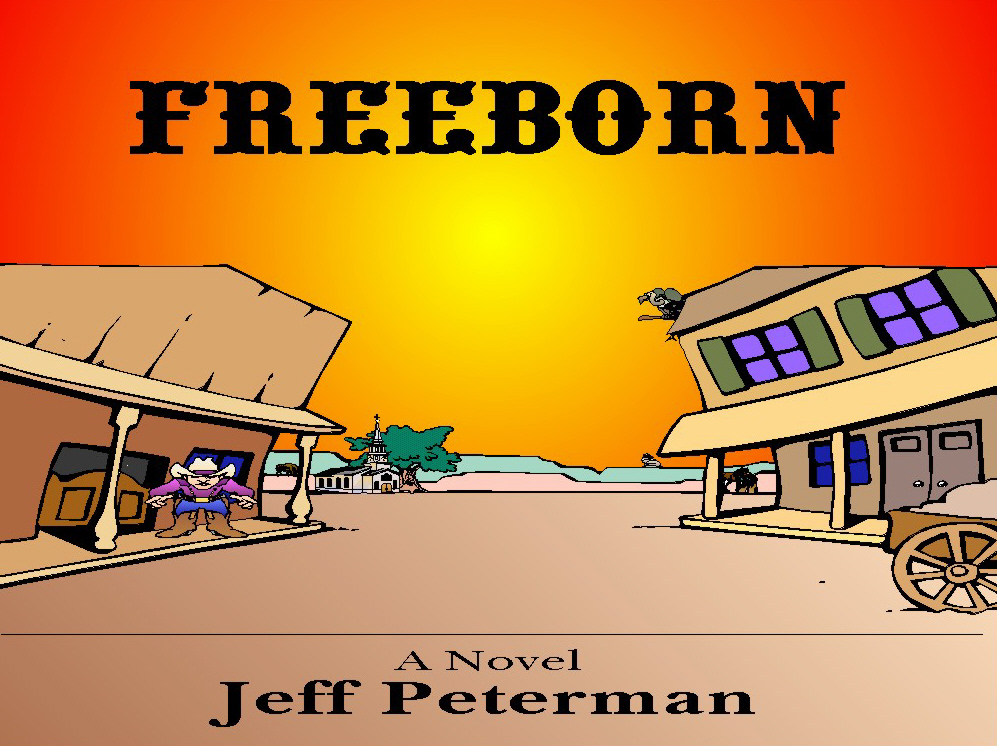 The Tale of the Wild West's Most Unlikely Hero. Western Fiction with a Twist.