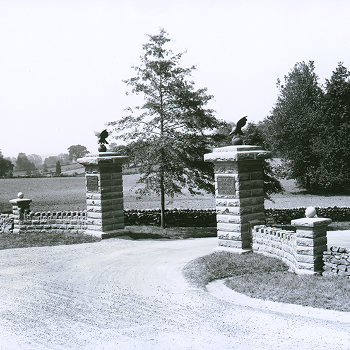 Above Image: The original gateway to Hancock Avenue at Taneytown Road, which will be rebuilt during the Cemetery Hill, Ziegler's Grove project over the next two years.

Gettysburg and the Next 150 Years

May 2015 - Funding has now been granted to complete the restoration of Ziegler's Grove and the Cemetery Hill area to the 1863 appearance. The $1.3 million dollars will begin in the fall of 2015 and last for two years with a new walkway from the Cemetery Gate to the High Water Mark, a reduced parking area, landscape changes, and replacement of battle markers to their original positions.

Grand opening to the Gettysburg Heritage Center museum shows a 3-d component to fabulous exhibits and the best context film in Gettysburg today.

July 2, 2014 - Yes, it's true, that whatever changes are made in the town of Gettysburg during the next 150 years, they will always take a back seat to the main reason millions of visitors traipse across the fields surrounding the town. It is a battlefield that saw, what many think, the most important military engagement in the nation's history and the reason why the United States did not break apart in 1863 and become two nations. It's hard at times to fathom what that means, particularly if you haven't been there. It's hard to explain just what the vistas and museums and battle walks will mean to you once you've come. Come and feel that for yourself. And now, in this first year past the first 150 years, there are three changes brewing in their various states of grace, to help you interpret the battlefield and the town. One takes it's cue from getting the landscape back to its original view, another protects an iconic landmark building of the battlefield as well as returning the ground around it to more pristine turf, and the third reconfigures an americana icon, turning wax into a heritage center experience that will wonder and amaze a new generation with high definition films, 3-D stereographs, stories of the town and battle, plus a balloon ride above that renewed landscape so you can get a bird's eye view of it all. 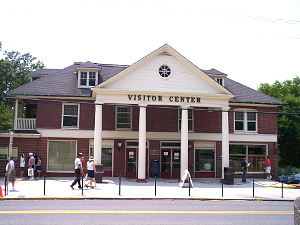 Prior to 2008, the visitor center along Taneytown Road, within Ziegler's Grove, was the iconic building of the park. It was the location where almost all visitors to Gettysburg came first, then likely took the tour of the Gettysburg National Cemetery, which was just across the street. It was built in 1921 and served the park into the spring of 2008. The visitor center was not built by the Park Service, but by the Rosensteel family, who had been collecting and providing orientation to the park for decades. The National Park Service bought this building in 1963, along with the Electric Map, which was in the rear. Oddly, the Electric Map is now in Hanover, Pennsylvania, although we're not sure if it's open for business yet. 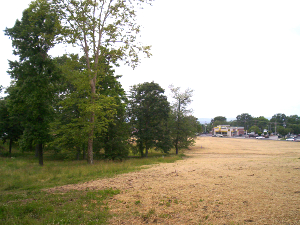 Now being converted back to meadow after removal of the old Visitor Center and its parking lot, Ziegler's Grove will undergo some additional modifications over the next several years, likely including a historic visitor path that will wind from this location across from the National Cemetery to the High Water Mark. There are also monuments that will be replaced now that the building and parking lots have been removed. 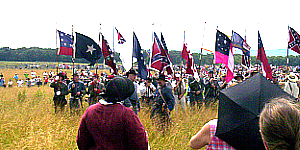 1. In the Past and Ongoing. There has always been a pull and tug in Gettysburg amidst providing visitor services and preserving the battlefield. Ziegler's Grove and Lee's Headquarters are only the two most recent examples. At one time, the land where the current visitor center sits was an amusement park. There was a Stuckey's in the middle of Pickett's Charge. Camp Letterman, along Route 30 east of town, was the location of the hospital camp where tens of thousands of soldiers were administered to after the battle, all the way into the fall of 1863. That land has not been preserved. The fight for preservation continues.

Things You Should Not Miss When You Visit

Whether this is your first or fifteenth visit to Gettysburg, there's always tons of things going on. Gettysburg National Military Park has about 15 different Battle Walks each day of the summer season, including a Pickett's Charge walk about once a week or once every two weeks. You can check their website if one's coming up. Check the 3:30 Battle Walk schedule. It covers a different walk per day. The visitor center is open all year round with a museum, movie, and Cyclorama. You will pay for those. Plus, the entire town bustles with activity, most of it Civil War oriented, at all times. Beyond the new Gettysburg Heritage Center, there are nearly one dozen private museums dotting the town, many in the Steinwehr Avenue area closest to the battlefield itself.

Photo above: Reenactors walking toward the High Water Mark during the 150th Anniversary of the Battle of Gettysburg. There are Pickett's charge battle walks several times per week during the summer season at Gettysburg. 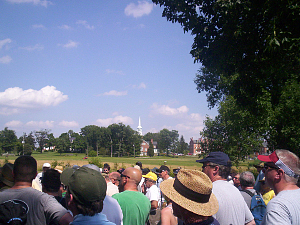 Day One Battle Walk with Park Ranger Matt Atkinson going from the area of McPherson Ridge to the Lutheran Seminary. (above) One of the many period buildings in the town of Gettysburg is the Shriver House, which holds tours and reenactments. (below) 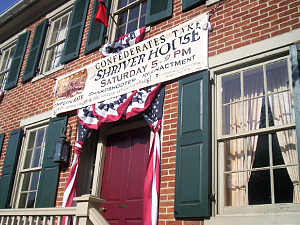 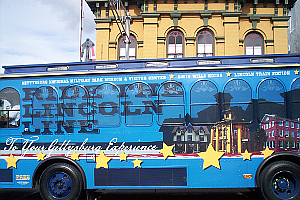