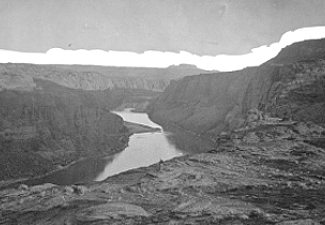 You're surrounded here. Surrounded by water everywhere you look. Surrounding by the rims of those canyons that rise above you while you ply Lake Powell or any of its watery arms. Surrounded by so many other parks from Canyonlands to the north, Grand Staircase-Escalante to the west, to Vermilion Cliffs and the Grand Canyon to the south, that you won't no which way to go when you leave. And it came about in an odd way, when preservationists fought against the damming of the area of the Green River and Dinosaur National Monument that they accepted Glen Canyon and a large presence here without really checking into what would happen or what the area was about. But, alas, it did, to later chagrin, and now provides recreation and history of varying kinds all along its long and varied shore. 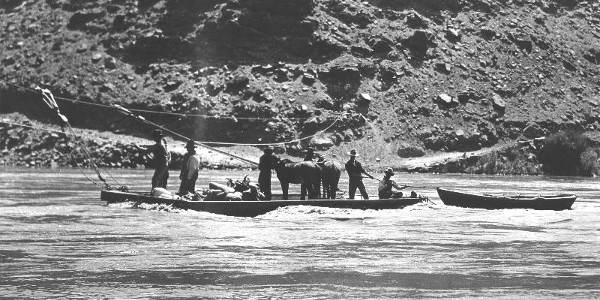 Cass Hite - In September 1883, Cass Hite arrived in the northern Glen Canyon area, looking for gold. He found it. A gold rush ensued, but did not last long. Hite built a cabin, then a store, and post office, and they called the area Hite City.

Lees Ferry - A natural location to cross the Colorado from both sides, the ferry was established by John Doyle Lee three years after his arrival in 1870. Lee was escaping capture for his part in the Mountain Meadows attack on a non-Mormon wagon train. He came with two wives and his children. In 1877, he would be caught by the U.S. government, tried, and killed for his role. The ferry itself outlasted Lee and ran until 1928. It also served as a military outpost during the gold rush days. The site of Lees Ferry was first found by European explorers in the Dominguez-Escalante Expedition of 1776.

How it became a dam, then Glen Canyon National Recreation Area - The U.S. Bureau of Reclamation had proposed two dams in the 1950's at Echo Park, flooding one hundred and ten miles of canyons in the area of Dinosaur National Monument. It was a site that the Sierra Club and other environmental organizations could not accept, supporting an expansion of the proposed dam at Glen Canyon instead. Litigation ensued and the expansion at Glen Canyon was approved. In October 1956, construction began there. Later books lamented the loss of the canyon, which had been mapped by the Powell expedition, but little seen by the public. Since 1972, it has been seen in its changed state after the creation of the National Recreation Area and the development of campgrounds and marinas. 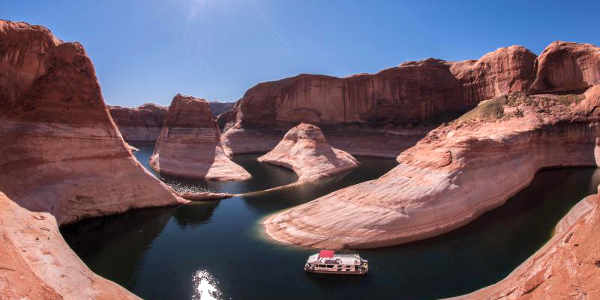 Stark. Wild. Scenic. A changed landscape. Preservationists may regret not seeing it for its former beauty, before it became flooded for power and recreation, but two million people now come to Glen Canyon to witness the alteration, more than likely would come had it not been changed. And the land that was there, and still is, although a good deal wetter, is home to history and fun, if you know where to look. There are cliff dwellings such as Defiance House, a ferry whose family has a long and unusual past, plus interesting present, a Hole in the Rock passage once used by Mormon settlers and now partially submerged. So when you ply the waters of Lake Powell on a day of frolic, peer into the canyon walls above you and ponder the days when the rock held Indian dwellers or pioneers looking for gold. Camp on the edge of a lake that provides water and power for all those devices that modernize our days, and wonder at not only the beauty of the nature that surrounds you, but the folks who came before as well as those that changed it. Yes, that last one might require a Glen Canyon dam tour.

Lees Ferry - Now part of the Lonely Dell Ranch Historic Site, there are historic buildings to visit and a trail to the ranch. The site is now a popular location for launching boats to raft south down the Colorado River to the Grand Canyon. 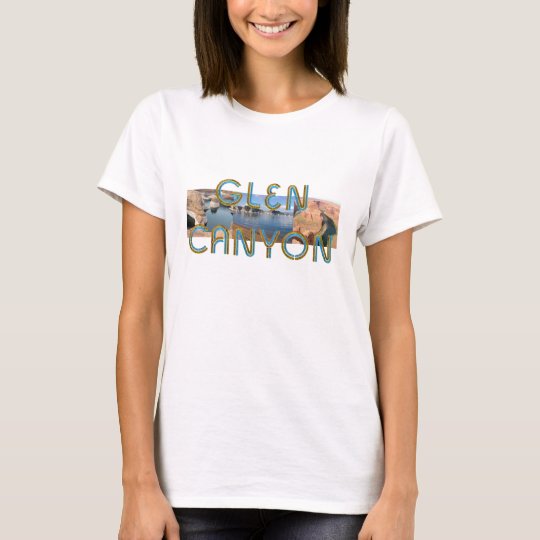 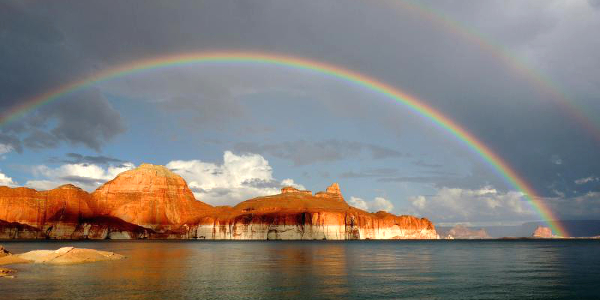 1. Well, you've most likely come here for recreation of the wet kind, so you must spend around the beaches and water, right? If most of your time requires boats on a lake, take a break from the water and try camping on the lakeshore or taking a hike. Although Glen Canyon has no maintained trails, there's plenty of day hikes in many locations; ask for suggestions and hike to your capabilities.

2. Take a tour of the lake. Even if you don't own a boat, there's ways to get on the lake. Guided boat tour are available from the Wahweap Resort to Antelope Canyon, or on dinner cruises, and jaunts that explain the history of the dam. There's also a tour of the dam from the Hayden Visitor Center area provided by the Glen Canyon Natural History Association, if you're fascinated by hydro-electric power. There are other guided tours and ranger tours as well. Ask for the current schedule when you arrive.

3. Head down to Lees Ferry and the Lonely Dell Ranch. It's a different way to spend the day than out on the river or a hike, but well worth the visit to learn about the Lee family history, which is not just based on the Colorado River and that ferry. How many wives did Lee have? Nineteen. How many children? Fifty-six. Any famous descendents? Senator Mike Lee.

4. Take a drive. Okay, you've been on the water for awhile, now get in your car and take a scenic drive down the Burr Trail. It's 67.4 miles long and takes your through not only Glen Canyon, but Capitol Reef, and Grand Staircase-Escalante for views of the Henry Mountains, Waterpocket Fold, and the Red Circle Cliffs. Passable for passenger cars most days; some days passable for no-one. Check conditions before you leave. 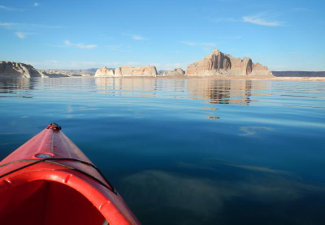 Three Visitor Centers:
Carl Hayden Visitor Center (South) - At the Glen Canyon Dam. There are tours of the dam, exhibits, video, a bookstore, and orientation. Open year round, except for some holidays.

There are a number of other ranger stations dotted along the miles of Glen Canyon, including Hans Flat, Hite, Halls Crossing, Dangling Rope Marina, Wahweap, and Lees Ferry where you can get orientation and assitance.

Lees Ferry - Located in the southern district near the Navajo Bridge Interpretive Center. There are historic buildings and a steamboat, plus the Lonely Dell Ranch Historic Site nearby.

Orange Cliffs - Located in the north part of the park, bordering Canyonlands National Park. One of the most scenic areas of the park. Hot, remote, dry, desert country. 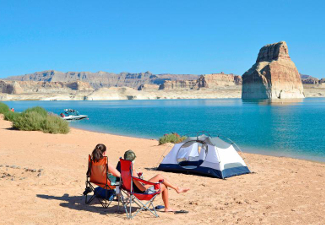 Okay, it's a bit hard to direct you since Glen Canyon National Recreation Area is surrounded by so many other parks you could be coming from, but suffice it to say, check your favorite GPS or mapping program for your own specifics. One direct route is from Flagstaff, Arizona. It's one hundred thirty-five miles straight up Highway 89, and will take you a bit more than two and one quarter hours. Yes, the Grand Canyon and Vermilion Cliffs will be on the way.

There is lodging here in motel units as well as trailers. Hotel rooms are available at Bullfrog and Wahweap. There is camping of both the developed and primitive kind all around the park. 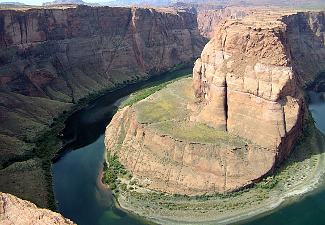 Other developed campgrounds are run by Lake Powell Resorts and Marina at Wahweap (South), Bullfrog (Central), and Halls Crossing (Central).

For lodging outside the park, a variety of motels, hotels, bed and breakfasts, etc. are available in Page, Arizona and other communities. Check your favorite online lodging site for the lodging type of your choice.

Another view of the water from the cliffs of Glen Canyon National Recreation Area. Image courtesy National Park Service.