Free with some parking areas charging a limited fee.

Changeable and sometimes harsh. Take care to check the latest weather forecasts for the area and be prepared for a variety of conditions. Overall the climate is temperate and arid. Ten inches of rain per year and twenty-eight inches of snow per year on average. Temperatures can get very hot in the summer, for example, the average high temperature in July in the southern reaches of the park average between 97 and 99 degrees. 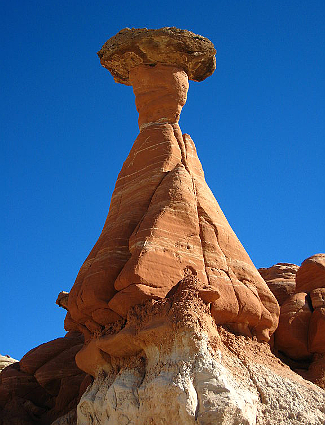 It's so large, it might as well be a state. At one million seven hundred thousand acres, Grand Staircase-Escalante is an abundant collection of national lands protected as a monument in 1996, open for hiking, camping, fishing, and other recreation amongst vibrant natural wonders and cultural sites around every corner. Of course, with the current controversy over the 2017 decision to reduce its size, this Grand might become smaller by seven hundred thousand acres. Still too soon to tell how the courts will rule on that, but that shouldn't deter you from visiting. The park has become a bigger and bigger star amongst the myriad of national parks and monuments of the state of Utah with over nine hundred thousand visitors traipsing into the wilderness, or a visitor center, either on their own journey or on the way to Zion National Park, Canyonlands, or Glen Canyon National Recreation Area. If you tell folks who don't live in the area you went here, they likely won't have heard of it, but when you show your pictures, they'll start planning a jaunt past the better known to the land of of a staircase and outdoor recreation so broad, it might just be a state. Oh, no, repetition of theme again with acknowledgement the state might just become smaller. Alert your neighbors. 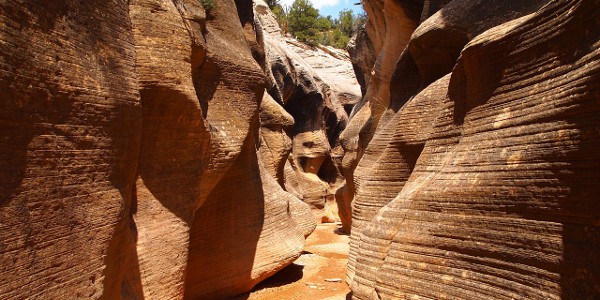 It's the largest National Monument in the Continental United States, surrounded by national lands of every size and designation; Bryce Canyon National Park, Dixie National Forest, Glen Canyon National Recreation Area, Capitol Reef National Park, and nearby others. Yes, there's so many acres saved here in the United States, that it would be a shame not to visit. Since President Clinton's designation as a National Monument in 1996, visitation and amenities have increased. There are three distinct areas of the park; the Grand Staircase, Kaiparowits Plateau, and the Canyons of the Escalante. It's a land of dinosaur fossils, with numerous found since the year 2000 alone, some 75 million years old. 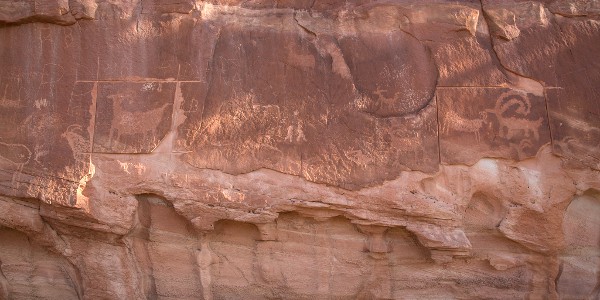 Human History - While not having to reach back nearly as far as those creatures from the Dinosaur era, humans came to the area of the park around 500 A.D. They would have come from the Fremont and Puebloan cultures. Evidence of their farms, shelters, and rock art can be seen throughout the park. It wasn't until 1866 that white settlement approached. Later expedition, including the Second Wesley Powell Expedition in 1871, and the San Juan Expedition in 1879 brought more European settlers and explorers.

Remnants of the past abound within the park from the petroglyphs and cave paintings of the tribes to the trails of the white settlers who traversed the land to towns nearby. You can visit the Paria Wayside, Old Spanish Trial and the Old Pahreah Town Site in the south. There's Dance Hall Rock in the east and Grosvenor Arch in the west.

Trailheads abound all over the place and take you into the interior of the park where the natural wonders take over. This is a wonderful place to explore on foot, horseback, or river raft. There are dozens of trails and sub-trails. Some interesting trails to check out, depending on your capacity:

Round Valley Draw (Northwest, Moderate) - 4.25 miles long southeast of the Cannonville Visitor Center. Interesting hike into the Entrance to the Slot and up the Mesa ascent.

Coyote Gulch (Southeast, Difficult) - A strenuous hike for only the most experienced, it's an 11.5 mile trek that most will overnight backpack on. You'll pass Steven's Arch, the Coyote Natural Bridge, and the Hamblin Arch, plus have to shimmy down a 50 foot cliff. Oh, boy. 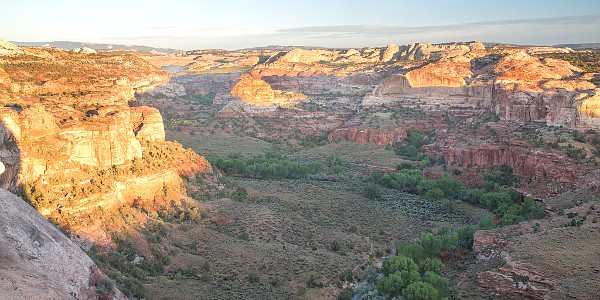 1. Stop in one of the Visitor Centers to get orientation for your day or days. It's a bit hard to explain how large Grand Staircase-Escalante is, but a visit to a park ranger, especially on your first visit, is important to get your bearings and find out what you want and are capable of doing.

2. Stay overnight, then hike a cool trail. A camp at Calf Creek Campground is a great starting point to one of the best hikes in the park. Calf Creek Falls Trail is green, wet, passes two falls and treks past stone that rises in unique forms around you. Must be hardy to take the trail, but it's not too bad in comparison with others around the park.

3. Drive the Hole in the Rock Road. It starts near Escalante and winds south for 55.5 miles. End of the road is 4-wheel drive necessary, and it will take you to the only point where pioneers could descend the canyon, 900' at the time, to the Colorado River with their wagons and supplies. It now goes down only 600' to Lake Powell. It's possible to hike that, but it is a difficult climb, so for most, the drive to see it will suffice. Road is dirt.

Photo above: Another sky and nature scene at Grand Staircase-Escalante. Courtesy Bureau of Land Management/Bob Wick. 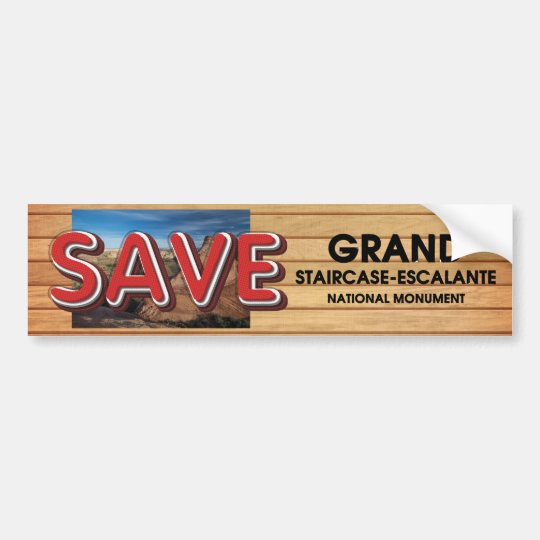 Save Grand Staircase-Escalante National Monument from downsizing and other National Park T-Shirts and Gifts from the official souvenirs of America's Best History. Great for nature, national park, and heritage history fans. 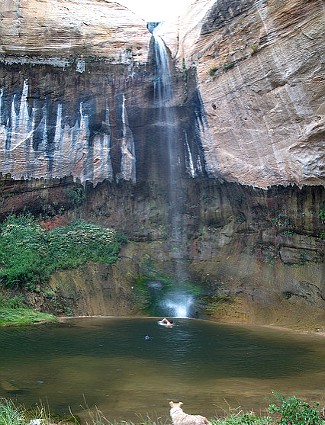 There are four Visitor Centers at Grand Staircase-Escalante National Monument, as well as a museum just outside the park in Anasazi State Park. This park is so large, you'll likely choose which one to visit, instead of visiting them all in one trip.

Big Water Visitor Center (South) - It's a Dinosaur Museum and Visitor Center in one, located between Page, Arizona and Kanab, Utah near the southern border of the monument. Great place for orientation and a picnic spot for outdoor food. Bring you own.

Kanab Visitor Center (Southwest) - Considered the main Visitor Center of the park, Kanab is open all year, and has interpretive displays about the park and its history. It is technically located outside the park in Kanab, Utah.

Lodging - There is no lodging within the park, other than camping, with motels, hotels, and bed and breakfasts in the towns nearby; Escalante, Tropic, Bryce Canyon, and Cannonville, as well as on the route from Zion National Park. Check out the choices at your favorite online lodging choice, or contact the local or state visitors bureau.

Camping - Backcountry camping is allowed here by permit and there are a variety of campgrounds around the park. In 2014, 25,643 permits were granted in campgrounds, with more in the backcountry.

There are other developed campground opportunities in the state parks just outside the national monument borders; Petrified Forest State Park and Basin State Park, as well as in the Dixie National Forest.

How far is it from the more known parks? Zion - 21 miles. Bryce Canyon to Escalante - 59 miles. It's not far to get to the shortest point, but beware, it could be a good deal farther and longer to get to the specific part of the park you're looking for.

Although they get less attention than our national parks, and likely will in your visit to the Utah area that includes Zion, Bryce, and Capitol Reef, Dixie National Forest surrounds the north and west parts of Grand Staircase-Escalante and provides a great opportunity to camp, hike, ski, and visit some interesting wilderness sites. There are tons of high altitude lakes, over two dozen campgrounds with a variety of rates, dispersed camping for free, and a few camping cabins. 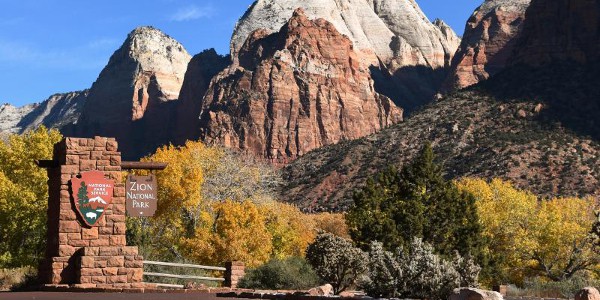