Warm on a summer day with average temperatures from 75-80 degrees. Cool nights, especially in the mountain sections. Weather can be very different in various parts of the park, such as the Visitor Center, Medano Pass, or Sand Creek Lakes. Altitude here is high, 8,200 feet to 11,745 so check the area forecasts often to stay prepared. It gets cold here, as expected in winter. Lowest recorded temperatue -25 degrees. 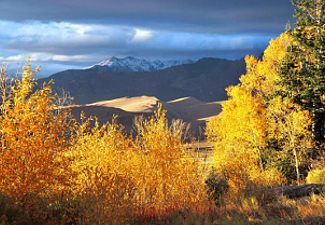 Photo above: Great Sand Dunes behind a stand of fall season trees. Right: Star Dune with the Crestone Peaks behind it. Photos courtesy National Park Service. It's an odd place when you think of its location. Sand dunes rising seven hundred and fifty feet above the valley floor in the middle of the Colorado Rocky Mountains with snow covered peaks during much of the vacation season on the dune horizon. Forteen thousand feet is what lay behind the sand with the park itself containing features well up in the altitude high. The Visitor Center, dunes, and campground sit at eight thousand two hundred feet above sea level. Medano Pass is ten thousand feet high. The Sand Creek Lakes are eleven thousand seven hundred and forty-five feet up. All that elevation provide a Rocky Mountain visit with a unique twist. Mountain adventure with a taste of the Mojave. 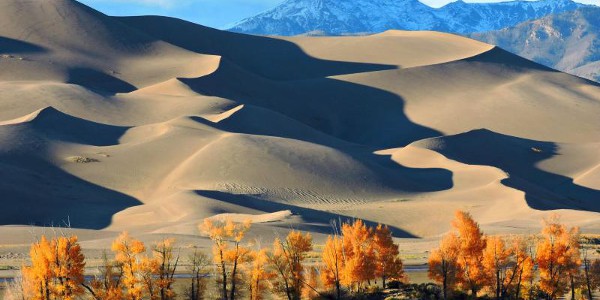 How long have people lived in this area? Well, try eleven thousand years. Yes, that's prehistoric, Stone Age, and mammoths in the hills times. How long ago did they form? Well, try four hundred forty thousand years ago. When the Spaniards arrived four hundred years ago, it was the location of many Indian tribes. In 1694, Don Diego de Vargas entered the San Luis Valley for mother Spain as the first known invader. However, others likely had hunted in the region for Spain as far back as 1598. During the Lewis and Clark journey back home, in 1807, Zebulon Pike wrote of the dunes. Westward migration would begin in earnest after that time, with the old Spanish Trail going through the area, leading homesteaders, gold seakers (1853), railroad men, and bandits.

By 1920, the thought of destruction of the Great Sand Dunes was on the mind of local residents. They supported the establishment of a national monument, which President Herbert Hoover did on March 17, 1932. It rose to National Park status in 2004. 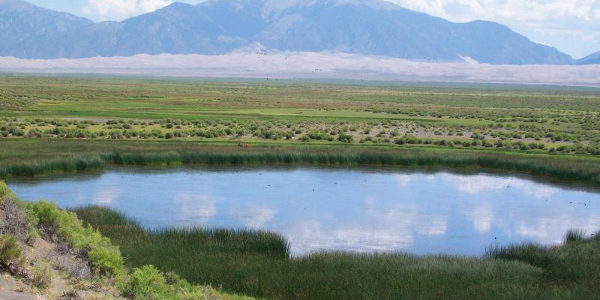 Today the national park contains the largest sand dunes in North America at seven hundred and fifty feet, covering an area of nineteen thousand acres. But that park has more than that dunefield. There's alpine lakes and tundra. Unlike most national parks, the preserve area of Great Sand Dunes does allow hunting at various times of the year.

It's a place where you can sandboard down a dune, see an elk, and climb into the heights of a trail to the veritable sky. Plus it's still a rare treat, per visitation, without the grand crowds of more known parks. This, however, does not suggest that Great Sand Dunes is not popular, as camping in the defined location as well as backcountry can fill up in the high season. There's such a variety of things to see and do here. A splash in the Medano Creek, a drive into the preserve (four wheel vehicle suggested for much of that trek), and that almost have to moment when you'll brave the sand and climb up as if you've just been transported to Arabia. Hmmm. Wonder if there's oil down below.

But as you can see from the vistas of the grasslands west of the dunefield above, the views here have dramatic switches from venue to venue. So if you don't love sand, there's a creek or a lake. If you want a more sedate adventure, watch the world go up and down a hill (sand or otherwise) from the Visitor Center or Pinon Flats Campground. If you have a four wheel drive vehicle, head out the Medano Pass Road past the Point of No Return, and climb into vistas not that many who visit the park get to see. You'll need to check about current conditions, even in the spring to summer season, as there are points of crossing creek and other hazards, but it is a good change of pace for the adventurous. If you don't have your own four wheel drive vehicle, there are tour and rentals in the area that might let you have the same adventure. But it's also a place for you to be careful. Stay safe while you're having your fun.

The Trails - These are located throughout the park from short to long, both in the National Park section near the Visitor Center and dunes to the mountain areas of the preserve. Check with the Visitor Center for maps and suggestions to what suits you best. 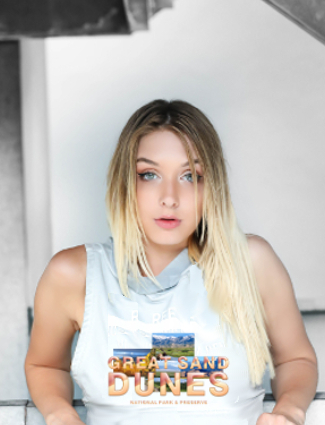 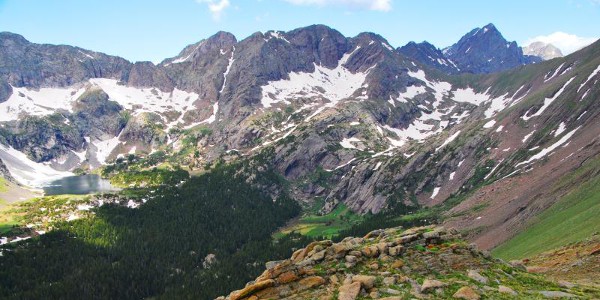 1. Head to the Visitor Center to get orientation, watch a twenty minute movie about the park, and check into available ranger programs. There's also an amphitheater at Pinon Flats Campground where night programs take place.

2. Take the walk up the hill or a ride down the hill. It's probably the most unique thing to do here. Spend time to hike up the hill. Sandboarding is also a blast here in the spring, summer, and fall. Be aware, however, that the sand can reach one hundred and fifty degrees, so best to do either in morning or evening.

3. Get away from the dunes if you wish and hike into the far reaches of the park. Many options available for your walk capacity.

3. Stay overnight and look up into a sky that's so dark, the Milky Way has a brand. It's called spectacular. Great Sand Dunes National Park is considered the quietest park in the land. 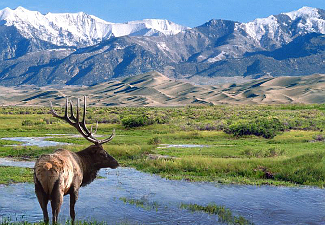 Visitor Center - Located in the main area near the Pinon Flats Campground, it is open year round with Ranger programs available from late May to fall. There are exhibits here, a twenty minute film, orientation, and a store. An amphitheatre is also located at the campground and is the site of ranger programs in the high season months.

Photo above: One lone elk from the large herd that live in the grasslands west of the dunefields. Courtesy National Park Service. 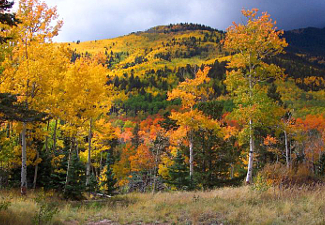 Trails abound all around the park and into the preserve. They include trails suitable for a variety of levels. Check at the visitor center for the trail that might suit you best. Some of the most popular include ...

Lodging - There is no lodging within the park itself, but there is lodging right outside the main southern entrance.

Camping - There is one defined campground inside the park, Pinon Flats Campground, which is located one mile north of the Visitor Center. The campground is open April to October, has 88 sites, half reservable, three group sites, and does have restrooms with water. There are no hookups. This can be a busy place during the time when Medano Creek is running, so book or come early. There are supplies available here at the Mosca Pass Outlet. Primitive camping is allowed on back trails with a free permit, and there are twenty-one drive-in campsites along the Medano Pass Primitive Road.

Other Campgrounds/Lodging - Just outside the entrance, there is a ninety site campground called Oasis as well as a store for supplies with the same name. Two other campgrounds are located within fifteen miles at San Luis State Park and on Bureau of Land Management Land, Zapata Falls. Lodging is located in Mosca just south of the park entrance and in Hooper, Alamosa, and Fort Garland. Check out the lodging choices at your favorite online lodging choice, or contact the local or state visitors bureau.