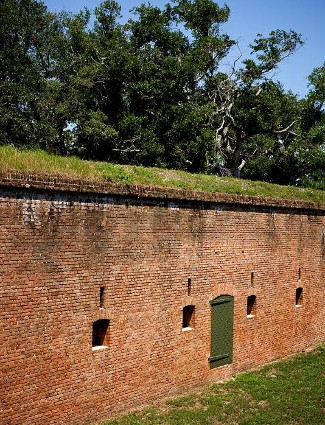 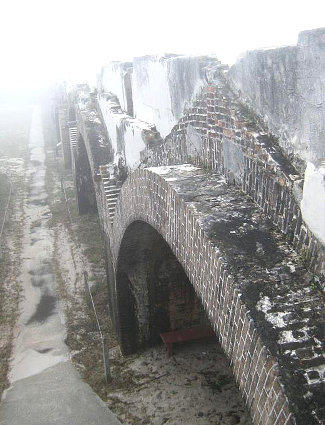 It's a relatively new park in a historic setting, not only of the Gulf of Mexico and those beaches that have been here forever, but in the forts that ring the area as protection against pirates, Union gunboats, Confederate soldiers, and post Civil War incursions, plus the historic background of Pensacola Navy Base. It was only 1971 when the first protection of this area as a park occurred, but since that time, Gulf Islands National Seashore, stretching along the islands of Florida into Mississippi has laid claim to over three million visitors per year. And they come to take in the fresh Gulf air, walk on those pure white beaches, and take a jaunt or two into the history of those seven islands and their glorious Civil War era forts. 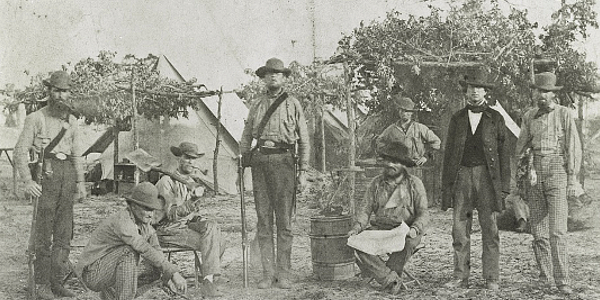 Fort Pickens - Historic fort built from 1829-1834 on Santa Rosa Island. Largest of the Pensacola forts, and named for Major General Andrew Pickens of the South Carolina militia who fought in the Revolution at Cowpens and the Siege of Ninety-Six. One of only four southern forts never surrendered to the Confederates during the Civil War, despite attacks in 1861 to bring them under control. Fort would remain in use until 1947. How many bricks used ... 21.5 million. Yes, slaves were used in its construction.

Fort Barrancas - Originally the old Spanish fort named Fort San Carlos de Barrancas that was built in 1797, today's Fort Barrancas was rebuilt, with two other forts, to protect the Pensacola Navy Yard. It was constructed from 1839-1844. Yes, there were forts here even before the 1797 edition, reaching back to 1698. During the Civil War, Fort Barrancas was abandoned by Union forces in favor of Fort Pickens.

Fort McRee - Built on the east side of Perdido Key from 1834-1839, it was a three tiered fort also abandoned by the Union in favor of Fort Pickens. When the Confederacy abandoned Pensacola in 1862, Fort McRee was burned. Very little remains of Fort McRee today.

Fort Massachusetts - Fort built on the Mississippi side of Gulf Islands National Seashore on West Ship Island, twelve miles off the coast, from 1859 to 1866. The fort was not fully completed, but remained in use until 1903. The fort was manned by Confederate militia just after secession in January 1861, abandoned, then remanned in June. In July, the USS Union Massachusetts would engage in a brief gun battle with the cannons placed there with limited damage to either side. Confederates abandoned the fort in September 1861. Union forces occupied it with 18,000 men and used the fort as a staging area for the Battle of New Orleans in 1862.

Image above: View of Confederate soldiers, Company B of the 9th Mississippi, in camp at Warrington Navy Yard, Pensacola; Jay Dearborn Edwards, photographer, 1861. Photo courtesy Library of Congress. Below: Currier and Ives lithograph of Fort Pickens, in Pensacola Harbor, between 1860-1870. Source: Library of Congress. 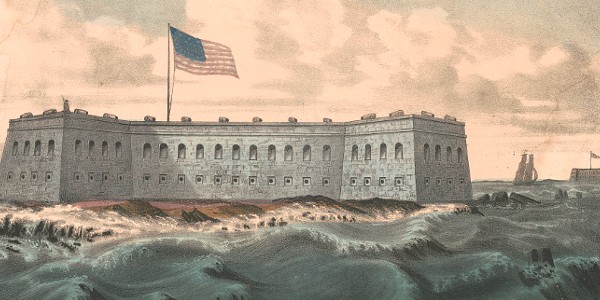 Yes, we'll admit it, when we hear the designation National Seashore, and we're a history site, we tend to shy away from thinking about the history aspects of the park, because we have assumed, at least in the past, that the park is more about recreation, nature, and those beautiful beaches than what came man made before it. But, as much as at any national seashore in the nation, Gulf Islands is not only all that, but it may have some of the best history around. Forts, forts, and more forts, some within an active navy air station, have stories to tell from the times of Spanish conquistadors to the Civil War and then to protection during World War I and through the second World War when technology began to render them obsolete. So while you walk amongst the nature with the Gulf of Mexico never far from view, sidle beside bayous where gators roam, or camp in a setting primitive or developed, you'll never be far from the history and a time when brick and mortar protected us all.

The three forts mentioned above, plus the Advanced Redoubt in the Fort Barrancas area, are included in the Gulf Islands National Seashore. You can visit the restored Pickens and Barrancas on self-guided tours or with a ranger guide. For many, the forts that once protected Pensacola and the Naval station are not their main focus of a visit, as the sun, sand, and water provide most of the impetus for a day or week. There are eight significant islands within the seashore to explore; Santa Rosa, Perdido Key, Petit Bois, Sand Island, Horn Island, East Ship Island, West Ship Island, and Cat Island. Four visitor centers provide exhibits, films, and ranger orientation to the recreation and the history. A wilderness area of over four thousand acres was also added to the park in 1978. Excusions to outer islands and forts such as West Ship Island and Fort Massachusetts are available by passenger ferry. 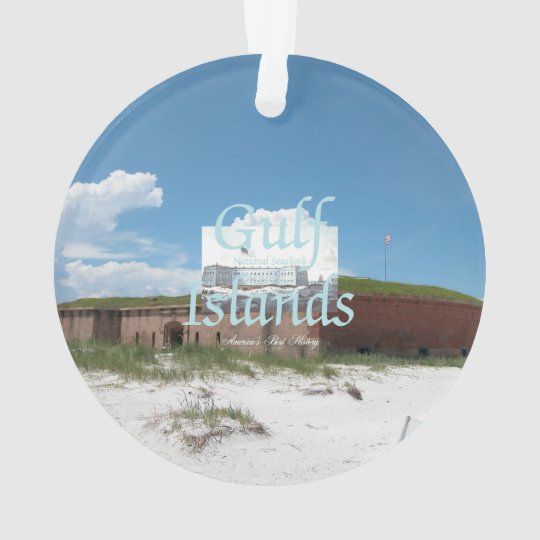 1. Despite its National Seashore designation, there's so much history here, a ranger guided talk about the forts and its Civil War past is a must. Held on weekends in the fall to winter season and more days during the summer, these walks and talks take you into Fort Pickens and Fort Barrancas, plus more, for a rousing story of how the Pensacola area has been defended for overy two hundred years.

2. Get your seashore on. There are additional walks, talks, and boat ride tours in the Davis Bayou, Mississippi region of the park as well. Some require reservations. Learn about alligators, the bayou, and the war. And if you've ferried over to West Ship Island and Fort Massachusetts, the variety of programs there will pump you full of knowledge of the nature and history after your twelve mile trip.

3. Just relax. Yes, we're partial to the history aspects, but there's just too much beauty here not to take advantage of a day at the beach, or a hike in the nature that abounds everywhere. Some of the whitest beaches around spread all over the park.

Photo above: Fort Barrancas in the Pensacola Navy Yard in 1919. Source: Library of Congress. 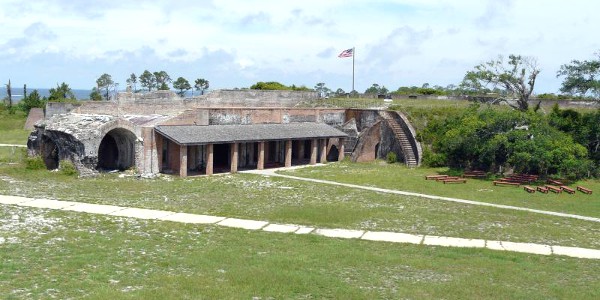 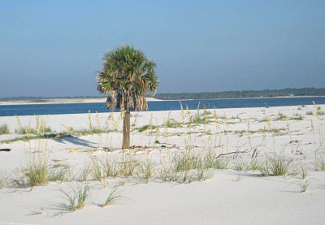 Fort Barrancas - Located, as well as the Advanced Redoubt, within Pensacola Navy Air Station. Fort Barrancas was abandoned by Union troops in favor of Fort Pickens in 1861. Ranger guided tours. Accessible by car.

Fort Massachusetts - Located in the Mississippi Davis Bayou region of the park, twelve miles off shore on West Ship Island. Only accessible by private boat or passenger ferry.

Mississippi, Davis Bayou Area - I-10 to Ocean Springs, Mississippi, Exit 50 or 57. Mainland location of this area is at the intersection of Route 90 and Park Road, three miles east of town. For the best directions to your specific part of the park, check your GPS or favorite map program. 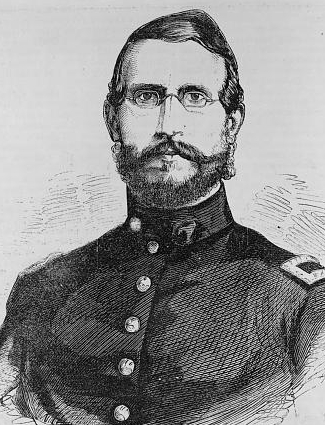 Lodging - No motel/hotel lodging within the park. Check out your favorite online lodging site such as for the lodging type of your choice in the Pensacola, Ocean Springs, or Gulf Coast region.

Camping - There are two developed campgrounds in the park, one in Florida and one in Mississippi. Primitive camping is allowed in various areas of the park, including East Ship Island, Cat Island, West Petit Bois Island, Petit Bois Island, Horn Island, and Perdido Key (no boat required). Ask at the park visitor center for those locations and their regulations.

Image above: Lt. Slemmer, Union Army, commander of Fort Pickens who had abandoned Fort Barrancas in 1861 in favor of the more defendable fort in Pensacola. Image courtesy Library of Congress.