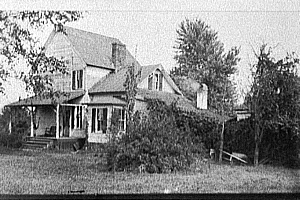 Picture above: Ferry Farm, circa 1900-1920. Right: Lithograph of George Washington and Lafayette in a meeting at Mount Vernon. Both courtesy Library of Congress. 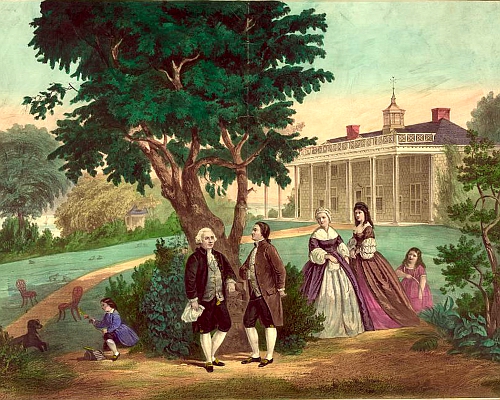 In a world full of wonderful National Park Service historic sites around Washington, D.C., Virginia, and the nation as a whole, it may seem odd that the most important domestic historic sites about George Washington, i.e. his homes, are owned and run by private enterprises, but they are. And it is because of the two foundations that run them, and have for years, that the history of the first president remains so vibrant in a time over two hundred years since his presidency. And it's a good thing they stepped to the plate and took on this task. Mount Vernon, the most known of the three homes, was in great disrepair in the 1850's when the Mount Vernon Ladies Association came in, bought the home for $200,000 and began to restore and open it to the public. For Ferry Farm and Kenmore, the George Washington Foundation has been maintaining, discovering, and presenting the story of Washington's family since 1922 when they purchased Kenmore, adding Ferry Farm, Washington's boyhood home from the age of 6 to 20, in 1996.

Mount Vernon - Over 80 million people have walked these grounds since the Association opened it to the public. At its largest, the plantation had 8,000 acres and hosted not only Washington's family it its residence, but guests like Lafayette.

Ferry Farm - Owned by Washington's father, Augustine, Ferry Farm was one of several the family lived in during Washington's boyhood. George would grow up on this farm from the age of 6 to 20. It was closer to the Accokeek Furnace where his father was a partner. Ferry Farm was home to the many stories of George Washington's youth, including the story of the cherry tree and stone throwing across the Rappahannock River. He would inherit it after his father died, although it was taken care of by his mother, Mary, until George was an adult.

Kenmore Plantation - Although at its current size, it's hard to imagine the plantation aspect of Kenmore today, when it was built in the 1770's, it included over 1,000 acres. Over 80 people worked the plantation at that time. It was originally owned by Washington's sister. 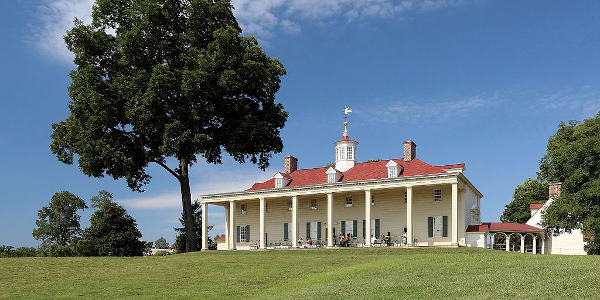 The life of Washington's family is intertwined in these homes, and although Mount Vernon is the best known and attended of them all, a visit to Ferry Farm, as well as Kenmore, adds to the understanding of where George Washington came from, and where his life revolved during the years of his childhood, the Revolutionary War, his Presidency, and afterwards. A visit to all three can give an added scope to the man, who, almost reluctantly, led a nation to victory, oversaw the decade of establishing a governoment, and served as its first commander in chief and chief executive officer, then gave way when his time and term was done.

Mount Vernon - The ladies have been doing a wonderful job of interpreting the site of Washington's mansion at Mount Vernon, adding all the time to its footprint and interpretation. The recent addition to the state of the art Visitor Center, the opening of the Distillery and Gristmill, and the upcoming addition of a George Washington Presidential Library on the grounds are just a few of the many things you will see when you visit.

Kenmore Plantation - The George Washington Foundation's first site, this mansion of George Washington's sister, Betty Washington Lewis and her husband Fielding Lewis, show a great example of the pre-Revolutionary home and life. It is located in Fredericksburg and includes Crowninshield Museum, a 45 minute tour of the home, and self-guided tour of the grounds.

Ferry Farm - Saved from development in 1996, this 80 acre farm of George Washington's childhood was located at an important site in Fredericksburg, overlooking the Rappahannock River and the ferry that transported travelers from one side to the city. There is a visitor center, self-guided grounds tour, and the 2008 discovered archeological site of the actual home that once stood there, and now a reconstructed home to tour on that very site.

Take a late fall walk around the boyhood home of George Washington, Ferry Farm, across the Rappahannock River from Fredericksburg, Virginia. A visitor center awaits, plus the grounds to the river, and a recently reconstructed home that the Washington's family lived in under his parents Augustine and Mary. Last picture in the video of George and Martha Washington dancing would not have happened at Ferry Farm, but foreshadows their days at Mount Vernon. 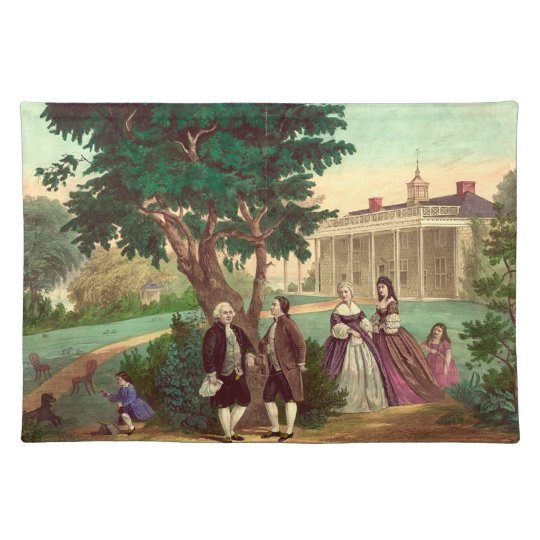 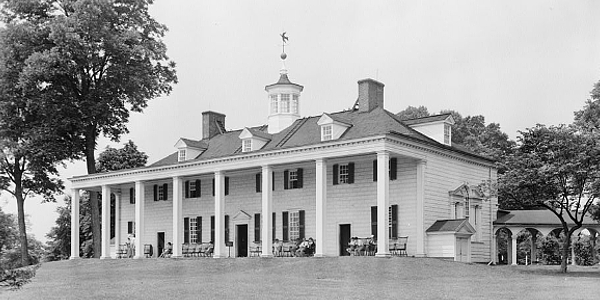 1. Although we almost always prefer the actual historic sites and not their interpretive centers, don't miss the Ford Orientation Center and Reynolds Museum at Mount Vernon. It is built to engage the young with interactive displays that make Washington's life and his accomplishments a vibrant story with implications that go far beyond the actual structures, no matter how wonderful, on site.

2. Walk around the grounds of the Ferry Farm, take the tour of the reconstructed home, and try to imagine the stories of Washington's youth that would form the man to lead the Revolutionary Army, become our first president, and actually do one really amazing thing that the world had never seen before. He gave up power when his term was over, and that one act, has led this first democracy of the United States to respect the office and the decision of its people every four years another election is held.

3. Take the Kenmore tour. It gives a good sense of what life was like in Washington's time, for his family and others. Kenmore also played a part in the Battle of Fredericksburg during the Civil War, as the battle raged all around the city during December of 1862.

Mount Vernon - The Ford Orientation Center, The Reynolds Museum with 25 galleries and an immersion theatre, the Mount Vernon mansion and tours, 500 acres to explore with other historic buildings and the vista over the Potomac River.

Ferry Farm - A visitor center, the archeological site of the Washington boyhood home, the reconstructed home with tours, Cherry Tree stories, and rock throwing tales over the Rappahannock.

Kenmore Plantation - Museum exhibits, a 45 minute tour of the home, and an insight into the Revolutionary and Civil War period.

Image above: The Washington Monument, uncompleted without capstone, from the Department of Agriculture building, circa 1880.

Washington - Washington, D.C. is a large metropolis that houses the halls of government, its employees, and visitors. There are a variety of hotels and motels to the south of Washington, D.C., within the city, and in many in the surrounding suburbs from Washington to Fredericksburg. Prices range all over the place and some motels provide lower rates during the weekend versus weekday when the government buildings are open. Check the local tourist board, or hotel/motel site for the choice that's right for you.

Fredericksburg - There are tons of places to stay in Fredericksburg, from the interchange areas off I-95 to more quaint establishments within the city itself. Check out your favorite online travel site, or the city visitor bureau for an appropriate hotel, motel, or campsite.