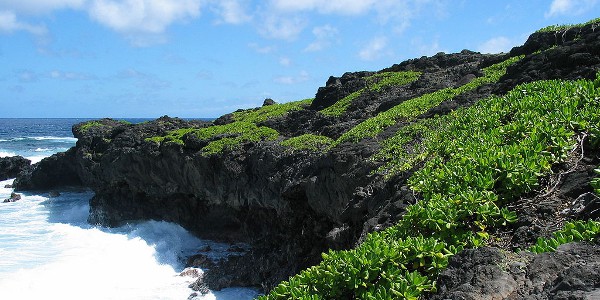 For most mainlanders, their thoughts of a Hawaii vacation center around the beach and those waves, the overall beauty of the islands, and perhaps a lei and luau. For those that know the island well, it's beauty lies not only in those well known places, but in the history of its land, and that means, at not only one place but several, volcanoes and verdant lush rain forest. At Haleakala, you get that from the sea to the volcano sky and the setting has both a lunar and a Lost television series feel. So don't forget to trek past the beach when visiting Hawaii and experience all aspects of Hawaii's natural wonders. You'll be glad you did, or get lost for a bit and won't care. 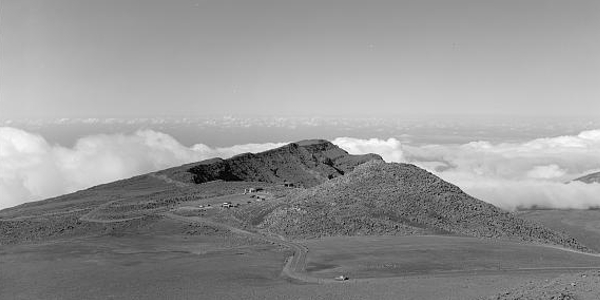 Haleakala Volcano - Last active in the 17th century, this volcano, which means house of the sun, is a shield volcano, by type, and formed seventy-five percent of the entire island of Maui.

World War II - From 1941 to 1948, the Haleakala section of the park was used by the United States military for an Advanced Aircraft Warning system station and base camp on six acres of the site.

Civilian Conservation Corps - From 1934 to 1941, the CCC built the trails and structures that dot the park, utilizing mules to trek supplies up the heights of the summit. 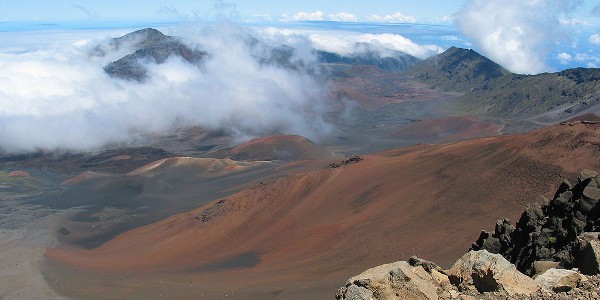 It's only been on its own as a national park since 1961, formerly part of Hawaii Volcanoes National Park, but today, Haleakala, House of the Sun, is a treat for visitors looking for diversity of landscape to witness from roads or hiking trails. It was thought, by local legend, that the semigod Maui imprisoned the sun here to lengthen the day. Whether your day will be lengthened by clear skies or clouds, the views from the Summit Section of the park create a breathtaking look at what a volcano can do to the land, or make you wonder whether you took a wrong turn and landed on the moon. Down in the coastal region, you're back to tropical views and ocean horizons from closer up. Each section is distinct, not only in flora, fauna, and view, but in how you get there. You can not travel from one section of the park to the other by park road.

Two distinct sections of the park provide a glimpse into the formation of the island and how it abounds today. From the Summit, you witness the volcano, now in its dormant state, with views over the landscape culled by its former activity. The crater is seven miles across and two thousand six hundred feet deep. Sunrises and sunsets here can be spectacular, as long as the clouds cooperate. From the coast, you can walk or view the ocean and its rain forest. This is, in many ways, a place to be outside. The visitor centers are not the attraction; it is the land and the stories of how it was formed and who inhabited the region. Spelling note: rain forest or rainforest. In the United States, both are used. Preferred? Depends on your dictionary. 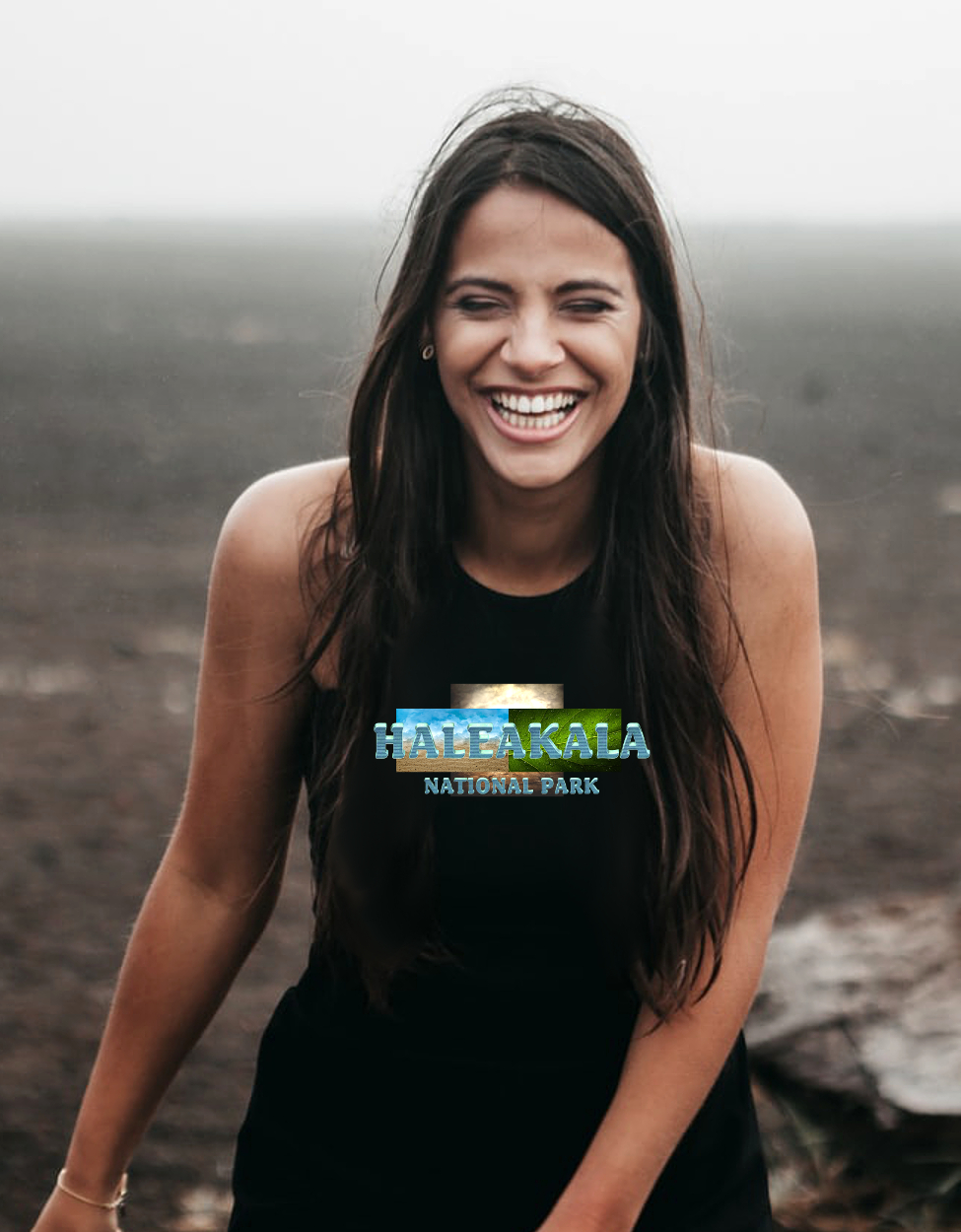 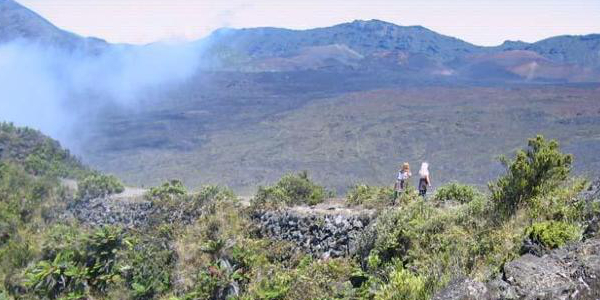 1. Take a ranger guided walking tour or talk. These are available most days, if ranger staffing allows. Usually from the Haleakala Visitor Center, there are guided trail hikes into Haleakala's nature or a talk in the Visitor Center. Other guided hikes are available at Kipahulu; reservations are often needed for that. There are also commercial tours authorized to take you around the park which focus on a variety of exploits, including astronomy. Check at the park visitor center for a list of the authorized tours and their specialties.

2. If you're able, get out in the outdoors and hike. Pick a trail that's suitable to your capacity and see what nature has to bring, from the diversity in this park of volcanoes to the Pacific Ocean. Stop for awhile and gaze into the horizon along the way. Over one hundred miles can be seen from here on a clear day.

Photo above: Scene from the Halemauu Trail crossing Rainbow Bridge of the Haleakala Crater. Trail was one of many improvement made by the Civilian Conservation Corps. Courtesy National Park Service. 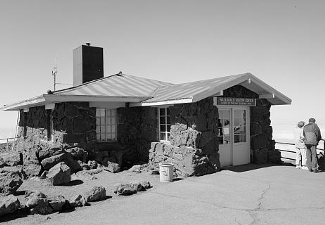 Haleakala Visitor Center (Summit, South) - At the end of the park road in the Summit section near the 10,000 foot peak, this historic stone building, 1936, has park orientation and info on ranger tours, which many times start from here or nearby.

Kipahulu Visitor Center (Coastal) - Twelve miles from the town of Hana. There is no food for sale, or gas, within the park.

Hiking Trails - One of the favorite pasttimes of visitors to Haleakala National Park is to hike one of the many trails in both sections of the park, as well as into the Wilderness. Take caution on your hikes, be prepared, and hike only to your capabilities. Due to the fragile state of the ecosystem here, you must stay on marked trails.

Photo above: Photo of Haleakala Visitor Center, greeting park visitors since 1936 in the Summit region. Photo courtesy Library of Congress. 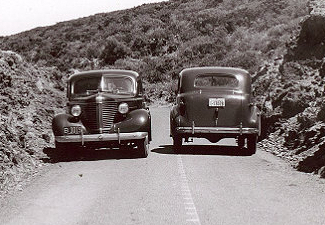 Lodging - Three twelve person cabins are available to rent and they require a hike in of at least 3.7 miles. These are rustic wilderness cabins with pit toilets. Not for everyone. For those that like a bit more luxury, check one of your favorite hotel/motel sites for the choice that's right for you. Not of lot of choices nearby, especially on the low price end.

Photo above: Two cars from the past passing each other on park roads. Courtesy National Park Service. 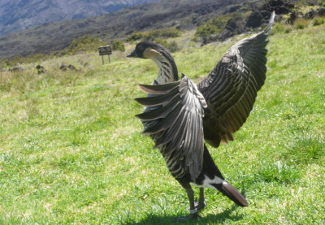 Haleakala National Park is located on the island of Maui and has two distinct sections, the Summit and the Kipahulu Coast. From the town of Kahului, it's about one and one half hours to the Summit, take Route 37 to 377 to 378. For the coast, you take Route 36 to 360 to 31. About three hours to there. There are no roads within the park that take you from one section to the other. 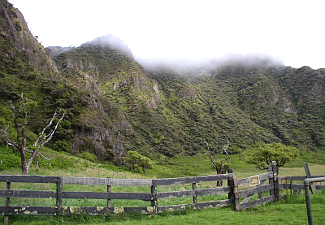