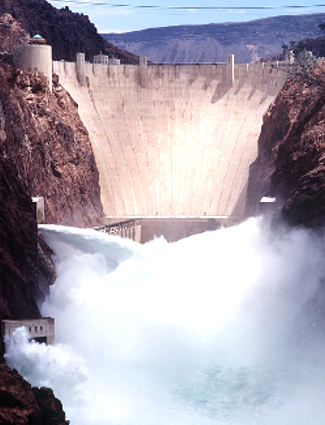 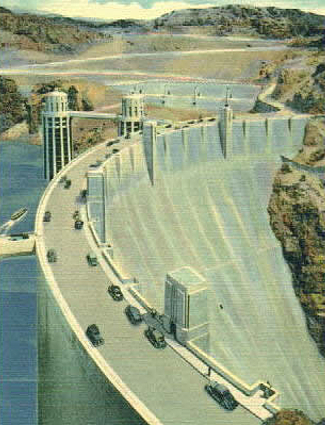 Photo above: Historic postcard of the highway across the dam connecting Arizona with Nevada. Source: USBR. Right: View of Hoover Dam and Lake Mead above it. Source: Wikipedia Commons. Nature created Black Canyon, a crevice formed fifteen million years ago between the El Dorado Mountains in Nevada and the Black Mountains of Arizona. Man created Hoover Dam and Lake Mead to fill it. There had been discussion of building a dam there for twenty-eight years before Congress finally approved it in 1928, essentially to control flooding and provide hydro-electric power to the southwest. When the depression hit one year later, cheap labor assisted the building, turning the project to completion two years earlier than anticipated. A city, Boulder City, was built just to house the workers, five thousand of them. Over one hundred workers would die in the effort to build it. Today the reservoir behind Hoover Dam is the largest in the United States by volume, although its levels have been reduced in recent years by drought and use, so others surpass that volume today. You can visit Hoover Dam and tour its wondrous man-made walls and turbines, with two tours available for you to visit, plus a Visitor Center. And if you wander up to Lake Mead, you can visit the upper reaches of Black Canyon, and see what fifteen million years and nature had previously done. 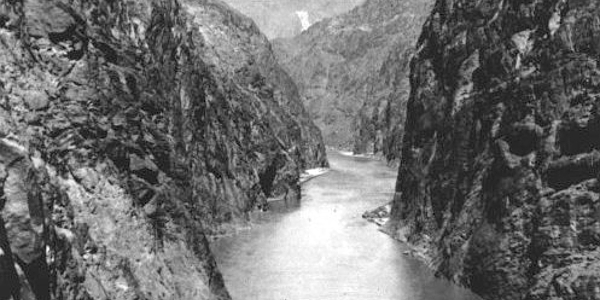 Once the site in Black Canyon was chosen by the Bureau of Reclamation, John L. Savage designed the structure as an arch-gravity dam, and the construction was put out to bid. Six Companies Construction, a joint venture, was awarded the contract. During the year after approval, the depression hit the United States, flooding the Las Vegas area with ten to twenty thousand construction workers looking for employment. Eventually 5,251 were employed. One of the first efforts in the construction was to divert the river into four tunnels 56 feet in diamater with two in Nevada and two in Arizona. Once the dam was constructed, it had used 3.25 million cubic yards of concrete.

At the time of its building, 1931 to 1936, Boulder Dam, it's original name, was an engineering marvel. Nothing like it had ever been done previously and, in many ways, such a large concrete structure and the techniques to build it were new. But it would rise over the next five years to 726 feet in height, 1,244 feet in length, and only cost $49 million. The dam would weigh 6.6 million tons. The water would be used and apportioned throughout the southwest states, as well as Mexico. Yes, there were disagreements to how this would be decided.

Photo above: Black Canyon prior to construction circa 1922. Photo courtesy USBR. Below: View from the crest of Hoover Dam. Source: USBR. 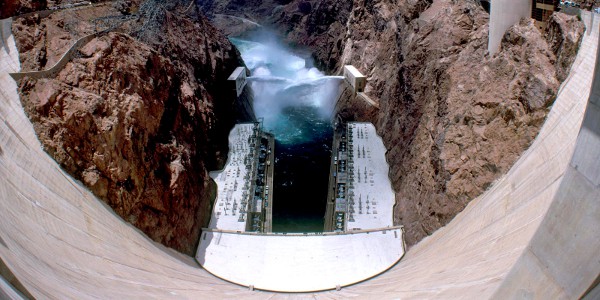 Beyond being a site to see for the up to one million visitors per year, with a Visitor Center, viewpoints, and tours, the main goal of Hoover Dam is providing electricity to the surrounding states. So how is it distributed? 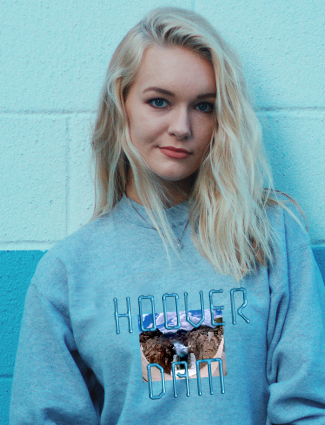 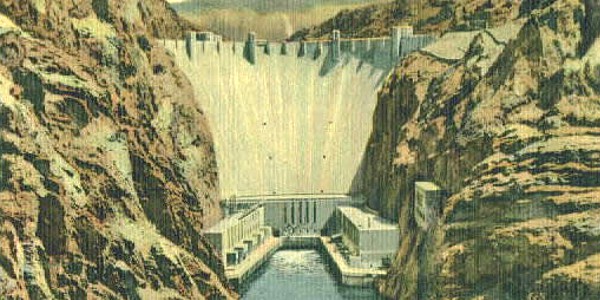 1. Drive across the dam. At one time, actually until October 2010, all travelers down Route 93 had to cross the dam. Now, the Pat Tillman Memorial Bridge houses Route 93 and through traffic is not allowed across the structure itself. However, when using Nevada Highway 172, you can cross it to the Arizona side to visit viewpoints and concessions. A return trip to Route 93 is necessary upon leaving.

2. Take a tour. While the Visitor Center provides a great glimpse into the history of the dam, there's nothing like getting a guided walk to the Powerhouse or Dam itself. Two options. Yes, the full one hour dam tour is expensive.

3. Visit the Spillway House. Hanging over Lake Mead on the Nevada side of the dam, the Spillway House was reconstructed several years ago and now provides public exhibits, including the Boulder, the original 1923 survey boat of the Colorado River, plus models of the dam.

Photo above: Historic postcard of the demonstration face of Hoover Dam. Courtesy USBR. 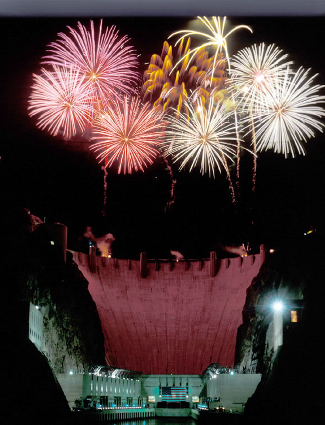 Hoover Dam - The dam can be viewed by driving across, on tours, and from walking to various viewpoints.

Parking Garage and Concessions - A parking garage for passenger cars and vehicles under 10.5' high and 23' is available with 459 spaces. Larger vehicles must use parking areas on the Arizona side of the bridge; some require a fee, some do not. There is a gift shop and food available on the lower level of the parking structure.

World War II Bunker - Most won't go here and it may not be accessible. Located on the Arizona side of the dam near the entrance to the old road. 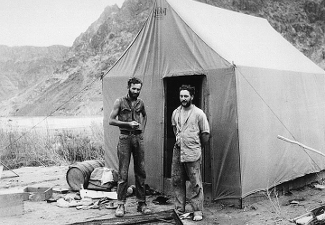 Lodging - There are a number of lodging options in that original company town, Boulder City, only six miles away. Check out your favorite online lodging site for the motel, hotel, or bed and breakfast of your choice. 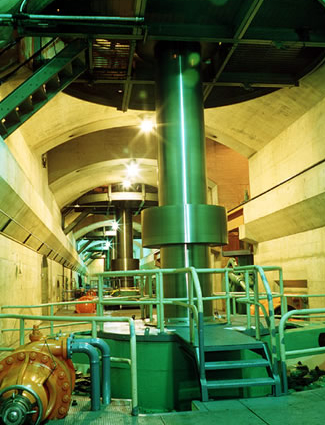 From Las Vegas, take Route 93 South for twenty-five miles, then Highway 172, the Hoover Dam Access Road, for two miles to the dam and Arizona/Nevada border. There is no longer through traffic allowed across the dam. For other routes, check your favorite GPS or map program. GPS coordinates: N 36.016222, W -114.737245. Approximately 30 miles and forty-five minutes to get there.