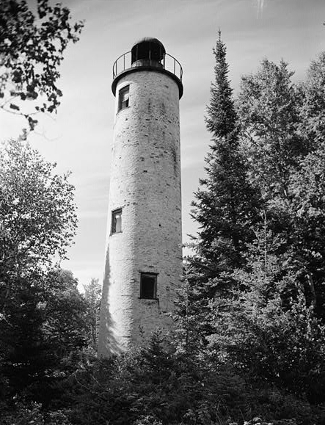 When we discuss remote for some of the National Park Service units, the only place that's really more isolated than Isle Royale are the tundra parks of Alaska outside the big five there. For Isle Royale, it's in its island nature requiring a ferry ride to the Lake Superior location of spectacular nature and beauty. Less than twenty thousand people visit the over five hundred thousand acres of the park. The ferry ride takes a minimum of two hours to get to the western side of the island from Grand Portage, Minnesota. If you want to visit the eastern end, it's a minimum of three hours from Copper Harbor, Michigan. But what you'll find, in the wildlife, fishing, camping, and outdoors fun, is a land of plenty, with lighthouses on the shore than have been directing sailors around this Great Lake arena for over a century. And they want the park to stay exclusive, see pricing, and facts such as no wheeled vehicles, even bicycles. 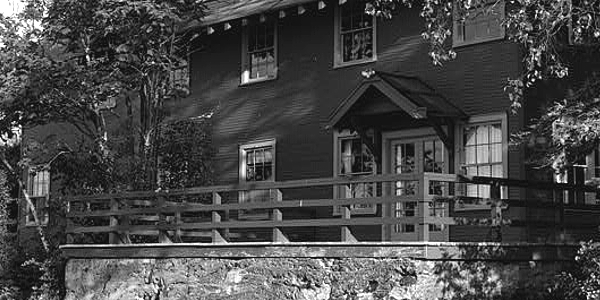 Tourism History - Part of the United States since 1783 and part of Michigan since 1837, it took until the mid-1800's for tourism to begin on Isle Royale. Within a decade of its start, day excursions and fishing trips pulled into the harbors. By the turn of the century, resorts appeared, first as tourist cottages, then followed by six resorts that would be in place by 1904. Park Place Hotel was built by Kneut Kneutson and later managed by daughter Bertha. After World War I, a modern lodge building was constructed and the name changed to Rock Harbor Lodge. After the ship America sank in 1928 followed by the depression era, only two of the resorts remained. In 1931, Isle Royale was authorized as a National Park and the Park Service bought Rock Harbor Lodge on July 22, 1938.

One Lighthouse Story - Increased shipping on Lake Superior caused Congress to authorize five thousand dollars in 1852 to contruct a new lighthouse. By 1855, the Rock Harbor Light was under way, completed one year later. It would have a checkered past. A decrease in mining traffic caused its close three years after opening; it was reopened in 1874 when copper mining increased. When the Isle Royale Light was opened on Menagerie Island and copper prices dipped again, the Rock Harbor Light was abandoned for good on August 24, 1879.

One Shipwreck Story - There have been twenty-five ships wrecked near the island through history; the first, the Madeline owned by the American Fur Company in 1839. They would continue at frequent intervals. On June 7, 1928, the passenger and freight steamer America sank. The forty-five passengers and crew were rescued safely. It had been built in Detroit in 1901 and used in service on Lake Superior since 1902. During its tenure, the America had a checkered past, too. That past ended off the water of Isle Royale and can still be seen four to eighty-five feet below the waterline. 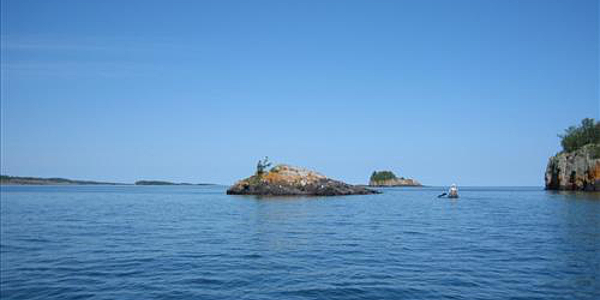 It's a long ride to get there by private boat or ferry, but that's how you'll likely come, unless seaplane is preferred. On the trip from the mainland, either Michigan or Minnesota, you start to get a feeling for the land that awaits in the center of Lake Superior. It's beautiful. Clear water. Verdant woodlands. Moose and other wildlife galore. And your trip will be expensive. That's part of the adventure here, although it does contribute to the exclusive low attendance vibe. This is a bit different from the past tourism era before the National Park Service started here in the 1930's and a bit odd in the NPS lexicon. But a trip here has to be well planned, paid for with a long and pricey ferry or seaplane ride, and thought through in advance. Your options while on the island get back to more National Park Service pursuits; hiking nature, boating nature, and camping nature. Of course, the lodge, and there is one historic lodge here, gets back to pricey.

Rock Harbor Lodge - This resort remains at Rock Harbor, providing motel rooms and cabins to visitors wanting more than a campsite on their trip. Boat tours, rentals, a store, and restaurant are associated with the lodge.

Lighthouses of Isle Royale - Today, there are four remaining lighthouses: Rock of Ages (1908), Rock Harbor (1855), Isle Royale (1875), and Passage Island (1882). You can get a boat tour to Rock Harbor from the lodge; a nice museum is located in the light station. 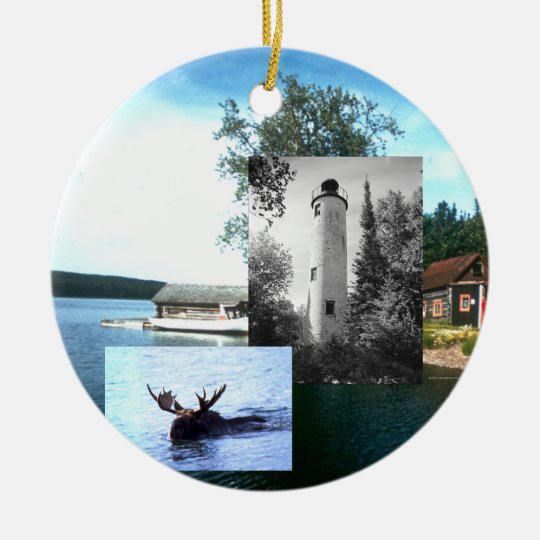 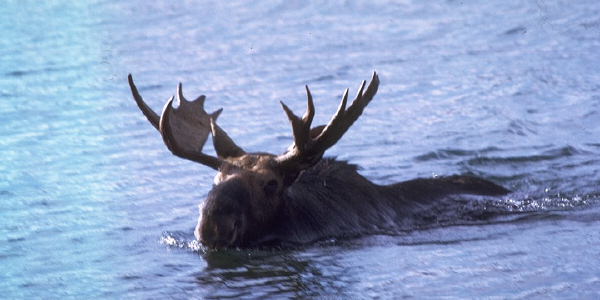 1. Take a hike on your own. It's probably one of the greatest pleasures to coming to Isle Royale, no matter whether you're going to hike the entire island, forty-five miles long and eight miles wide, camping along the way, or do a day hike and get back on the ferry. Day hikes would occur near the Visitor Centers of Windigo and Rock Harbor and the layover time for day trips is only three to four hours.

2. Take a guided boat tour. Tours at Isle Royale almost always have a price, and as we've said before, they're not cheap. The MV Sandy Tours require an extra fee to visit places such as Hidden Lake, Passage Island, Rock Harbor Light, or take the Sunset Cruise. But, if you've already spent the dough to get here, an extra price is likely not a hindrance.

4. For those that want to have somewhat of a feel of Isle Royale without actually going to the island, you can visit the Houghton Visitor Center, go on the Keweenaw Waterway Cruise ($20 adults), or take in a kid oriented ranger program at the Lake Portage District Library. 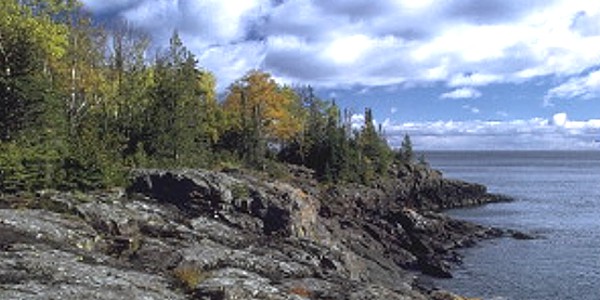 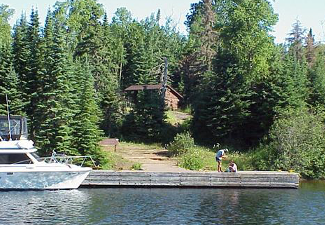 Ranger III Ferry - Houghton, Michigan to Rock Harbor Visitor Center. Operated by the National Park Service. Late May to early September, Tuesdays and Fridays to Isle Royale; Wednesdays and Saturdays back to Houghton. Seventy-three mile, five hour trip with interpretive programs on board. Carries 128 passengers and some boats. Cost $70 and up, Adults; $35 and up Youth 1-15; under 1 free. Some days prior to high season are available at a lower rate.

Voyageur II Ferry - Grand Portage, Minnesota to Windigo and other locations. Early May to early October. Two hour minimum trip. Cost $142 and up roundtrip, Adults; $98 and up roundtrip 4-11. Under 11, free.

Seahunter III Ferry - Grand Portage, Minnesota to Windigo. Hour and one half one way, four hours on island. Contact for fare information. 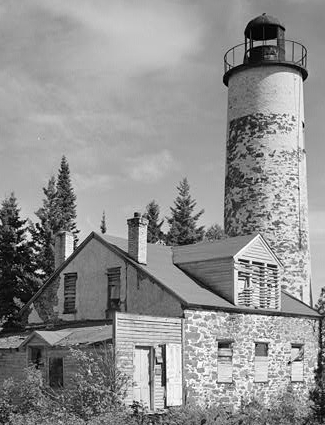 At the Rock Harbor area, there's one lodge available with cabins and motel rooms. There are also camper cabins 45 miles from the lodge in Washington Harbor. The Rock Harbor Lodge has a restaurant, store, marina, sightseeing cruises, and a whole lot more. It's expensive, in the range of $250 for the motel rooms. The camper cabins at Washington Harbor cost slightly more the $50 per night; there is no indoor plumbing in them. If you're staying on the mainland prior to your ferry or camping trip in the park, there are a variety of lodging choices in the communities nearby. Check out your favorite online lodging site for the hotel, motel, or bed and breakfast of your choice.

Camping here is free, although a permit is required. There are thirty-six campgrounds around the park and island, only accessible by hiking or boating. Many of the campgrounds are a backpack day from one to the other.