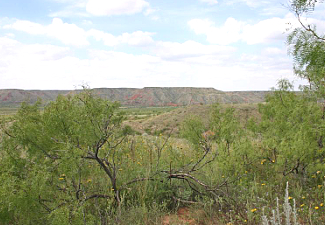 Photo above: Scene away from the lake at the park. Right: Lake Meredith. Photos courtesy National Park Service. It's recreation in the Texas panhandle in the lake formed by the Bureau of Reclamation dam of the Canadian River in the 1960's. Yes, it's this far south and more red than you'd think. There's hiking, fishing, boating, and camping. And all of this is free, at least until 2018. Right next door you'll even visit a higher amount of history at Alibates Flint Quarries National Monument. How far back history? Mammoths roamed the earth. Yes, that attendance figure seems low for Alibates, but that's only because of the presence of that larger and wetter neighbor which likely counts some of its visitors. Most of the ranger tours for both parks start at the Alibates Flint Quarries Visitor Center. 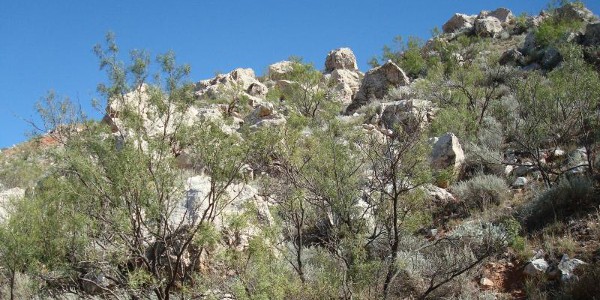 Lake Meredith has been a popular location for Texas recreation since it flooded the panhandle in 1965, but for those coming to the park, or Alibates Flint, for the first time, it's good to stop first at park headquarters in Fritch for orientation, or perhaps even better, to the visitor Center for Alibates. 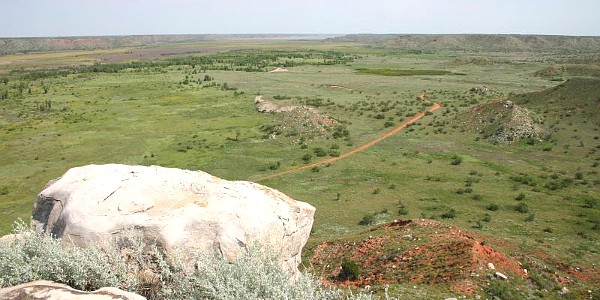 Lake Meredith And Alibates Flint Then

Now you're talking history here. In the pits of Alibates Flint Quarries, there are hand dug pits dug by hand by Mammoth hunters of thirteen thousand years ago. You'll even walk amongst the flint when you venture down there on tour or by yourself. At first, the area was populated by the hunter gatherers. Around 1150, the Antelope Creek people lived and worked the quarries, but left prior to Spanish settlement. Spanish Explorer Coronado encountered early ancestors of the Apaches, introducing horses to the region. From the early 1700's until 1870, the panhandle region was the home of the Comanches. Settlers came after that. In 1877, W.H. Bates and David T. Beals established the LX Ranch in the Alibates Flint Quarry area.

McBride Ranch - David Nichols and Abigail McBride moved to the canyon on the LX ranch in 1897, eventually building the stone ranch house that still remains in 1903. It had two rooms and was built with timber from an old bridge and stone from the quarries nearby. The ranch also included a bunkhouse, coral, ice house, and garage.

While the Alibates Flint Quarries area remains a testament to the history of the area (it was the first National Monument in Texas), the area of Lake Meredith changed for good with the Sanford Dam construction on the Canadian River which started on March 11, 1962. It was completed three years later. With the advent of the National Recreation Area, the lake that was created, ten thousand acres of it, became a well attended recreation spot. At one time, the park drew two million visitors, although the lowering of the water levels has dipped the attendance some in recent years.

Today you can visit the history of Alibates Flint Quarries and recreate around the lake. It's a vast area of opportunities to camp, fish, boat, kayak, and hike, all in Texas panhandle style.

Photo above: Looking out over the Alibates Flint Quarries. Courtesy National Park Service. 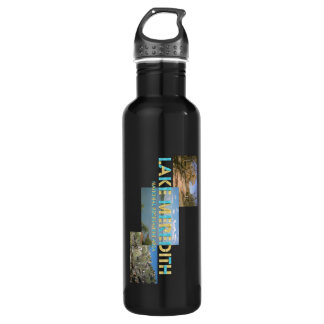 Lake Meredith NRA T-Shirts and other history souvenirs from the official merchandise of America's Best History. 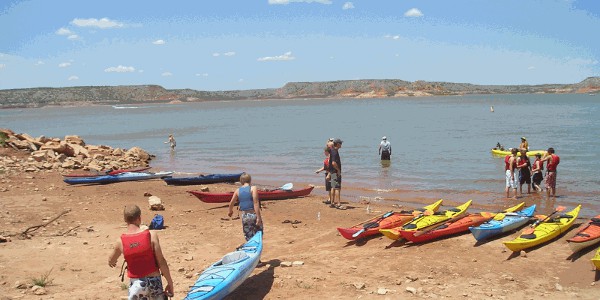 1. Hike the Harbor Bay Trail. For those that want to spend some time not getting wet, take a hike around the lake. It has vistas galore of the lake and canyons. It's not an easy walk, so be prepared and only hike to your capability.

2. Take a boat, kayak, or canoe ride, but you've got to bring your own.

3. Visit the Alibates Flint Quarries National Monument Visitor Center, then take the ranger guided hike into the quarry. Yes, lots of steps, two hours long, and it's bound to seem more than the mile you travel. Just imagine trying to hunt a mammoth and the life of the Antelope Creek people later when you get to their village site. For those that don't want to walk, there are other ranger talks that require less foot work. Check at the Visitor Center for their schedule.

4. Camp under the stars. Ten locations plus backcountry camping, too.

Photo above: Kayakers waiting to get into the water at Lake Meredith. Courtesy National Park Service. 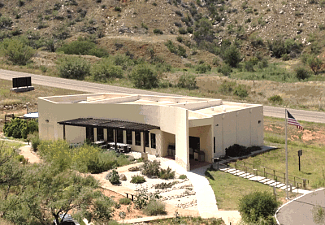 Lake Meredith Park Headquarters - This is the place to stop and orient yourself about the park. There's also a book store and facilities. It's open 8 a.m. to 4:30 p.m Monday to Friday. The park is open 24 hours a day all year long.

Alibates Flint Quarries Visitor Center - Park is open year round, except major holidays. The visitor center has exhibits on the thirteen thousand year history of the quarry, a theater, and the starting point for ranger guided tours.

McBride Ranch House - Located in the southern portion of the park in McBride Canyon.

Lake Meredith Aquatic and Wildlife Museum - Near Harbor Bay, it's small, but interesting.

Hiking Trails - There are the best known such as the Harbor Bay Trail, a moderate to hard trail that's between two and eight miles long depending on the loop you choose. There also the Mullinaw Trail (moderate) and South Turkey Creek Trial (easy to moderate). The trail at Alibates Flint Quarries takes on a more historic note, as its ranger guided. Only one mile long, but lots of steps. 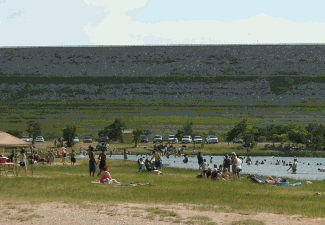 There is no lodging within the park itself. Motels are located in the towns near the park, including Fritch and Borger. You are also thirty miles from Amarillo. Check with the lodging options at your favorite online lodging site, or contact the local or state visitors bureau.

There are ten campgrounds in the park and right now, in 2017, they are free. There are no hookups and dump stations plus potable water are available at only a few.

Plum Creek - Southwest side of lake.

Blue Ridge Creek - Off road, northwest side of lake.

Private camping is also available outside the park with more amenities.

The physical address of the park headquarters at Lake Meredith National Recreation Area is 419 E. Broadway Fritch, Texas 79036. To get there from Amarillo, you'll want to take Loop 335 North, then Highway 136 North to Fritch.

For those heading over to Alibates Flint Quarries National Monument, it is right next door. Physical address is 37084 Alibates Rd., Potter County, TX 79036.

Photo above: Dirt path in McBride Canyon. Below: Steps out of the quarry at Alibates Flint. Courtesy National Park Service. 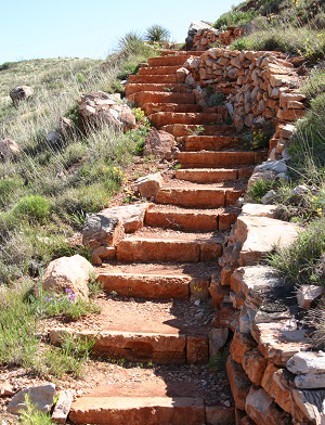