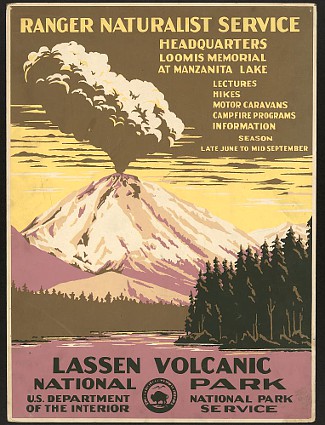 Okay, be honest. For those of you who are not from northern California, how many people even knew that Lassen Volcanic National Park existed? How many knew that there was another pretty cool national park, outside Yellowstone, with steam rising from the ground or that Lassen contained all four of the volcano types in the world. Yes, all four. Prospect Peak representing the shield type; Lassen Peak, a plug dome; Cinder Cone, yes a cinder cone; and Brokeoff Volcano, a composite volcano. So, if you decide to pop into the north central part of California and visit a park, consider making it one with a unique set of features not found in many parts of the globe. And you'll get to discover something most people in the United States don't know exists, but really should. 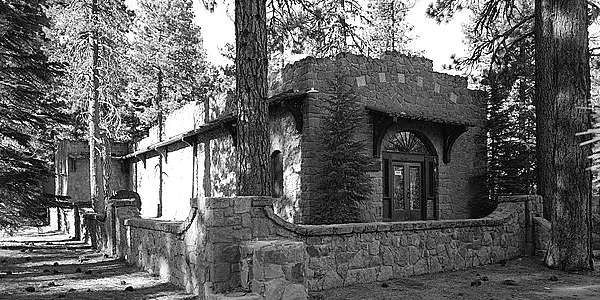 The activity on Lassen Peak began with rumblings on May 30, 1914, just twenty-seven thousand years since it last decided to blow. Within one year, over one hundred and eighty steam vents had pushed through the surface, creating a one thousand foot crater. On May 14, 1915, lava started to fill the crater and begin to flow. The great explosion would come eight days later, pushing a plume of ash thirty thousand feet into the air. It could be seen from one hundred and fifty miles away along the Pacific coast. 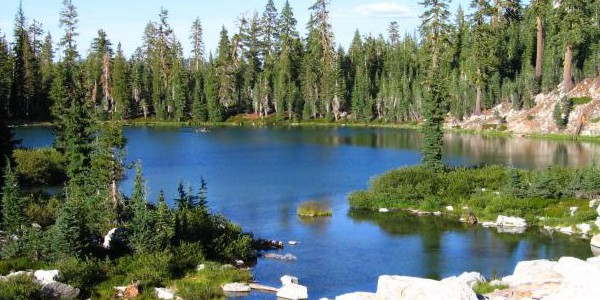 It began in 1914 and produced a massive explosion on May 22, 1915, sending ash over two hundred miles away. Lassen Peak had exploded and now remains as the largest plug dome volcano in the world. It's the southernmost in the Cascade Range and today provides the dominant feature of Lassen Volcanic National Park, which was created only two years after that eruption. Today you can walk over one hundred fifty miles of trails, some through the ash fields, some on boardwalks surrounding steam vents and mud pots that still steam and boil. It's a natural paradise with tons of camping activities in the summer months and winter wonderland in the cold. Over thirty feet of snow covers the park most winters. There's two visitors centers, ranger guides, and exploring to do in this park created by the second to last mainland USA volcano to explode. Yes, just before, Mount St. Helens.

Today, there's still an active volcano under this earth, althoug its power has been diminished, at least for the moment, into mud pots and steam vents, plus hiking trails to the summit of Lassen Peak, five miles long and a two thousand feet rise in elevation (not for the inexperienced). There's also walks to other features of the park at various hiking levels below that steep climb. You can stay at a Guest Ranch, drive the thirty mile park highway, and get visitor services at two visitor centers, including the summer only, but historic Loomis Museum, where the artifacts that Mr. Loomis made during his watch of the 1915 activity are exhibited, as well as ranger programs given, and a film to be viewed. 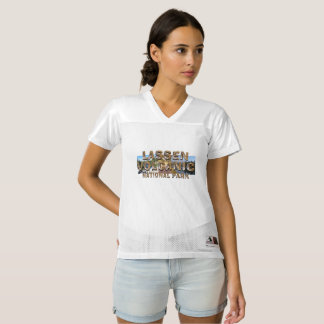 Lassen Volcanic National Park T-Shirts and Souvenirs from the official merchandise of America's Best History. Great for your next hiking, camping, volcano sightseeing adventure or to remember one you've already had. 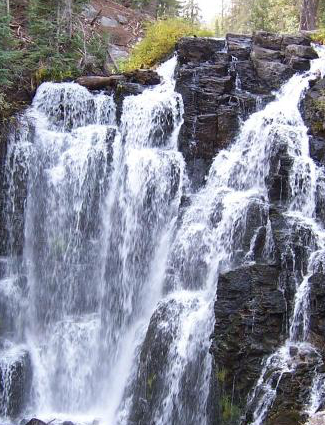 1. Take a ranger guided tour. Lassen has a variety of tours of both summer and winter variety. If you're hearty, capable, and snow orieted, they've got snowshoe hikes from January to the beginning of April. They'll provide the snowshoes, too.

3. Step from your car onto a trail and take in the sites further inland. There's a three mile summer trail into Bumpass Hell. A quarter mile interpreted loop in the Devastated Area. How about a thirteen mile hike at Snag Lake? Pick a trail that meets your physical capabilities and head out. There's over one hundred and fifty miles of them. Be safe. Remember to stay on established trails and boardwalks. This is an active volcano area with hydrothermal activity all over the place.

4. Even if you can't stay at Drakesbad Guest Ranch, you can eat there, although you will need reservations. It's in a remote area of the park far from the visitor centers, but if you're in the area, it might be a unique, but not cheap, treat. There's not a lot of places to eat in the park overall; the Lassen Cafe in the Visitor Center, the Camper Store at Manzanita Lake, and at the Drakesbad Guest Ranch.

Photo above: King Creek Falls, located off the main park road between Summit Lake and Lassen Peak. The park road is thirty miles long and runs form the southwest to northwest entrances, or the other way around, depending on your orientation. Image courtesy National Park Service. 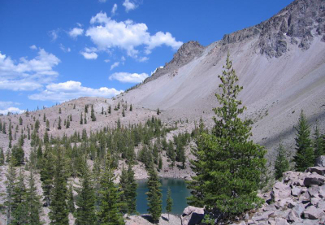 There are two visitor centers in the park, one open year round and one, more historic, only in the summer months.

Loomis Museum, Manzanita Lake (Summer months) - This is the more historic and also includes exhibits on B.F. Loomis and his documentation on the peak's last eruption, an auditorium with park film, and ranger programs.

Beyond the man-made, there are a lot of spectular sites to visit along the 29 mile main road that runs between the two visitor center areas or at the other more remote entrance points.

Manzanita Lake - Some of the best view of Lassen Peak, plus the Loomis Museum, a campground, and camper store.
Brokeoff Mountain or Mount Tehema - Used to be one peak before an eruption cut it into four; Brokeoff Mountain, Mount Diller, Mount Conard and Pilot Pinnacle.
Hydrothermal areas spit and spew around the park. The two most famous, Bumpass Hell (several miles north of the main Visitor Center, trail open mid-summer) and Suphur Works (even closer to the Visitor Center).

Lassen Volcanic National Park is located fifty miles east of Redding, California off Route 5. Take Route 44 east. Sacramento is one hundred and sixty-five miles away. Coming from the east, it is located one hundred and eighty miles from Reno, Nevada. Take Route 395 west to Route 44. Make sure you gas up prior to getting here. There are limited facilities within fifteen to fifty miles, depending on the direction you are coming from.

Lassen Volcanic National Park is a remote park. There is one lodging establishment inside the park; the Drakesbad Guest Ranch, in the Warner Valley area, which is open June to October. The ranch has a lodge, cabins, and bungalows to rent. Rates are not cheap, think $150-200 per day per person, depending on how many per room, but it does include three meals per day.

In the towns along the way, such as Mineral, Red Bluff, Shingletown, Redding, Hat Creek, Old Station, Burney, or Chester, there are a variety of restaurants, motels, and bed and breakfasts. Check out your favorite online lodging site for the lodging type of your choice.

Camping is much more plentiful in the park and surrounding Lassen National Forest. There are seven general campgrounds, four group campgrounds, and three stock corrals. Most are open from May/June to September/October. Only Southwest Campground is open year round, which is near the main Visitor Center and is walk-in.

An abundant number of campsites are also available in the Lassen National Forest, which surround the park.