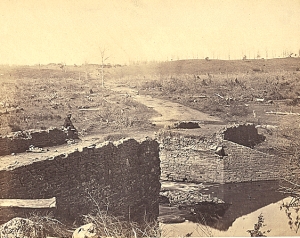 Manassas. Bull Run. Site of the first major battle of the Civil War plus a second battle a little over one year later. Manassas Junction, just twenty miles west of Washington, D.C., would host two struggles meant to solve the split in the Federal government which began with a South Carolina secession and the bombardment of Fort Sumter. It was a struggle that many thought would be over quickly, so much so that when it was learned that a battle was brewing along the edge of the stream known as Bull Run, picnics were packed and bonnets tightened amongst the political class and aristocracy of the city. By the end of one hour amongst the hail of bullets, cannon fire, and the shrieks of the wounded and dying, it was pretty clear that the callousness and levity that the citizens of Washington City thought about the strife would be gone forever. Four years later and over 700,000 citizens and soldiers dead would make the first day at the first battle of Bull Run, in Manassas, Virginia, far from a quick and easy solution. And remember the context that those casualties caused on the fields from this suburb of the District of Columbia to Vicksburg and Atlanta, to Gettysburg and Shiloh. They came in a nation not of three hundred million residents, but one of thirty-one million people as of the 1860 census in all the states and territories. The Civil War would begin at Fort Sumter, but not be cemented until the first Battle of Bull Run was over. Just think about the numbers to come, of the tragedies that would play a part of almost every family. Context to today, imagine the demise of nearly six million Americans. That is what the Civil War meant after the battle. That was what was about to come. And if it had not been realized on July 21, 1861 on those surrey drives from Washington to the first major battlefield in 1861, it was on the way home and many times more in the four years hence. Let us not forget what Bull Run, or the Civil War, meant then or today, and the effect it has on the freedom we have today as well.

Abraham Lincoln had issued a call for troops on April 15, three days after the attack on Fort Sumter in Charleston harbor. For the next few months, outside a small skirmish or two, the time was spent in preparation. Union commanders trained their troops, those three month wonders, while Southern generals, now including some of the best Army generals such as Robert E. Lee and Stonewall Jackson, did the same.

General McDowell was confident that his army could defeat the troops of Beauregard. That, however, was predicated on the ability of Patterson to hold the remaining troops of the Confederate Army in the Shenadoah. But this did not happen, and by the time of July 21, General Johnston had brought his troops into the Bull Run. The fight would begin with a Northern assault and end with a Confederate counterattack. When the Union forces broke, they would retreat back to Washington in defeat, competing in the fury of withdrawal with all the spectators who had come to the Virginia countryside for those picnics. The casualties in the first Battle of Bull Run would be small compared to those of later battles, with over 3,500 killed, wounded, and missing. It would be small compared to the second Battle of Bull Run held during the last days of August in 1862. But what it augered for, and foreshadowed, was far from small. It would devastate a nation, and would take years to bring the nation together again and heal all of the wounds.

1st Battle of Bull Run - With General Irvin McDowell appointed by Lincoln to head the Union troops of the Army of Northeastern Virginia, and given orders to gain quick victory. The Confederates were too close to the city, with a line stationed barely twenty-five miles away. McDowell would attack them with two columns while Patterson prevented reinforcements from the Shenandoah. McDowell began his movement early on July 21, 1861 toward Sudley Springs and the Stone Bridge. The battle had early Union success, but through the effort of Stonewall Jackson during the afternoon, the tide of the 1st Battle of Manassas began to turn. When Union guns were captured, it turned to Confederate advantage, and the last Union troops retreated from Henry House Hill at 4 o'clock. Meanwhile, Confederate reinforcements from the Shenandoah and Johnston's command came into play, defeating Union forces on Chinn Ridge. The Union retreat became panic as they crossed the Bull Run, joining the fleeing civilians who had come to witness the battle.

Between the two battles, fear gripped the citizens of Washington as they feared a campaign against the city, but Confederate forces did not pursue that strategy. General McDowell was given credit for the defeat and replaced by General George B. McClellan following the battle.

Over the next year, federal forces would come back to the area.

2nd Battle of Bull Run- Fought from August 28-30, 1862, the Second Battle of Manassas was much larger than its predecessor. It was precipitated by the capture of the Union supply depot by Stonewall Jackson. On the 28th of the month, multiple attacks were launched by Confederate commanders under the overall command of General Robert E. Lee; Jackson at Brawner's farm (stalemate) and Longstreet at Thoroughfare Gap (success). General Pope, now commanding the Union Army after McClellan's firing due to failure of the Peninsula Campaign, attacked Jackson's position the next day, but gained no ground. When Longstreet arrived on Jackson's right, unknown to Pope, the next day's attack by Union forces failed, causing a retreat that harkened back to that of the 1st Battle of Bull Run, although action in the rear of the Union Army restored order prior to the same level of disorder of 1861.

Photo above: Stone House along Lee Highway at Manassas National Battlefield. Below: The Henry House on Henry House hill with the modern visitor center in the background. Manassas National Battlefield Today - Visiting Manassas will give you an appreciation for the beginning of the Civil War and the sacrifices that were taken way back in 1861 and 1862 to guarantee our freedom while keeping the soverignty of our entire nation intact. Although the park at Manassas has become surrounded by the enroaching suburbs of Washington, D.C., you can still feel the impact of the two Battles of Bull Run that shaped the Civil War and the nation. Through guided walks, talks, films, and living history, all on the actual ground where the soldiers fought, a visit to Manassas today will go a long way to helping you understand where the nation was fought for and how each of those struggles allowed the United States of America to endure. 1. Watch the Manassas: Age of Innocence film. It covers the subject of both battles of Bull Run and the Civil War. It is 45 minutes long and shown on the hour in the theatre to the left of the information desk at the Henry Hill Visitor Center.

2. Take the Manassas driving tour. With or without the audio CD (fee), the tour consists of eleven stops and helps the visitor understand the scope of both battles. During the First Battle, there had been 50,000 troops on the field and 4,878 casualties killed, wounded and missing; during the Second Battle, 112,000 troops on the field and 18,300 (approx.) casualties killed, wounded, and missing.

3. This is something we would urge everyone to do, if there is a Ranger guided walk during your stay, take it. A variety of topics are covered at Manassas Battlefield Park, most originating from the Henry Hill Visitor Center, but some even more detailed walks span out from various points on the field. Some of these occur only during the two Anniversary weekends; ask at the information desk what is available on the day you visit.

4. For those that like to visit the odd location on the field that most visitors don't trek to, try visiting the Thornberry House. It's one of only three original structures there during the battle and sits near Sudley Ford on a one mile trail across from Tour Stop 5. Be careful when you cross the road and on the hike. Thornberry House was also used as the Sudley Springs Post Office.

Photo above: Thornberry House on the Manassas Battlefield.

Henry Hill Visitor Center - The main Visitor Center for Manassas National Battlefield Park is situated off Sudley Road. You can view the park film, The End of Innocence, at the center, check into the ranger guided tours for the day (available spring to fall), and check out exhibits, including the electronic battle map, on the battles. There is also the Henry Hill Loop Trail nearby, which is self-guided and one mile long. This trail predominantly covers sites of the 1st Battle of Bull Run.

Stone House - Twice engulfed in battle, the Stone House is open on weekends with guided tours and other programs.

Walking Trails - There are a variety of walking trails through Manassas National Battlefield Park. Beyond the Henry Hill Loop Trail near the visitor center, two longer trails cover each battle; the First Manassas Trail is 5.4 miles long and the Second Manassas Trail is 6.2 miles long. Interpretive trails at specific spots on the battlefield are also great for hikers and Civil War visitors at the Brawner Farm, Chinn Ridge, Matthews Hill, Stone Bridge, and the Unfinished Railroad. There is no lodging or camping within Manassas National Battlefield proper, but there are plenty of motels, hotels, and other choices down Sudley Road along the Interstate 66 corridor toward the town of Manassas. This is a busy place with lots of chain restaurants, motels, and mall tenants. Check out your favorite online lodging site for the hotel, motel, or bed and breakfast of your choice. In fact, the entire area around the park, including Route 29 which goes directly through it, is busy. Try to avoid these roads during rush hour or you may encounter a couple mile backup trying to find a tour stop.

For campers, there is Bull Run Regional Park nearby, southeast of the park off Route 29, as well as a private campground, Greenville Farm Family Campground, in a working farm setting five miles north off Sudley Road. Prince William Forest Park, with campground space and cabins, is also located off I-95 about twenty to thirty minutes south.

Image above: Stonewall Jackson at the Battle of Bull Run, August 17, 1861. Photo courtesy Library of Congress. 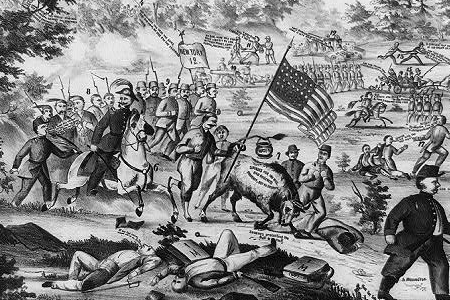 More Photos from the Battlefield 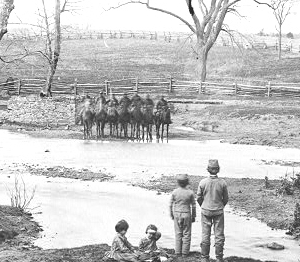