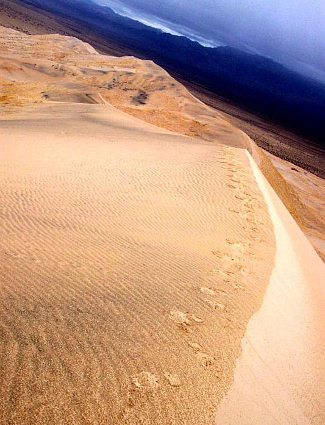 It's a whole lot of sand, desert, hot weather, and holes in rock caused by something called Taphoni-style weathering. Google that one. But whatever that means, it's certainly cool and prevalent in the walls of the Mojave. This is a huge park, now adjacent to the new national monument called Castle Mountains. Over 1.5 million acres abound to wander, hike, camp, and visit both the Indian heritage, the natural wonders, a visitor center crafted from a 1924 railroad station, and more. And it's all located along the Interstate 15 corridor to Las Vegas, for those in your party who need diversions that man made and gambles a lot more tame than the harsh nature and environs the Indians and western settlers withstood along the desert lands of the Mojave. 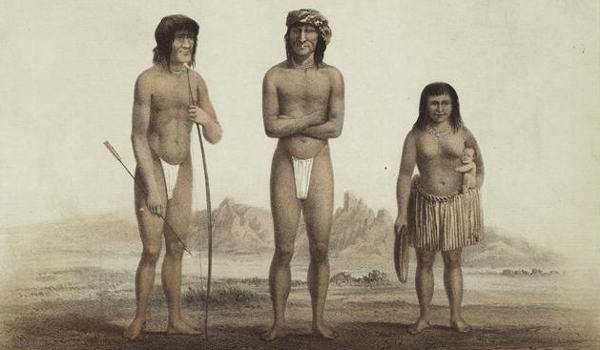 This was the land of the Mojave, a tribe with two leaders who took different paths in their relationships with the Europeans that would follow. Chief Cairook, born around 1814, led the tribe in the Mojave War, which stemmed from the Mojave attack against the Rose-Baley party on August 30, 1858. The Rose-Baley party was the first wagon train to traverse the 35th parallel with over one hundred people and five hundred head of cattle. The attack by Cairook and three hundred warriors was repulsed, but cost eight settler lives and thirteen warriors. It gained the Mojave goal for the moment, as the party turned back to Albuquerque. The war would eventually prove the opposite, lasting until April 1859 before peace ensued. Irataba was a Mojave man of the same age who disagreed with the attack on the party and the war. He was elected leader of the Mojave tribe after the war, when leaders of the Mojave were imprisoned, including Cairook, and killed, including Cairook, when he tried to escape. Irataba chose peace for the Mojave, although his legacy is still debated as to its value to the tribe due to the reservation that was agreed upon and whether that was a true positive outcome for his people who were dislodged and displaced by the Europeans that would settle the desert. Irataba was lauded as a peace maker at the time, even meeting with President Abraham Lincoln in Washington in 1864. 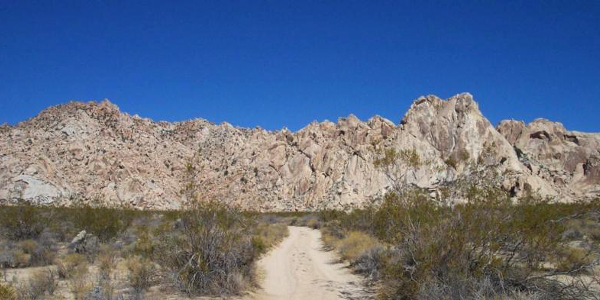 Vast and foreboding. Harsh and beautiful. The landscape of this park in the desert of the Mojave Indians defines it and will your experience. Mojave National Preserve is the third largest park in the United States outside Alaska. It has only been a preserve since 1994, but that's quibbling over designations most don't care about. There are petroglyphs from tribes that traversed this territory long before the Europeans came, before railroads crossed the land, before four wheel drives recreated. And yes, it is dry and hot. Less than thirteen inches of rain falls here each year. Bring water. Enjoy the sparseness of the land, the uniqueness of the features of the rocks that climb above its valleys, and the attempt by man to corral it through settlement that failed and mines that did not.

Today, the heritage of the area includes that of the desert, the Mojave tribe, and those that came to seek fortune. In 1872, the General Mining Law induced mines to spring up all around the Mojave. In 1883, silver was discovered in the Bonanza Silver Mine. In the 1940's, steel from the iron ore mined at the Vulcan Mine would build U.S. ships during World War II. Even today, the Soledad Mountain gold mine is owned by a Canadian company who estimates 31 tons of gold and 375 tons of silver sit there.

But none of those things will likely draw you to the Mojave. You'll come to recreate, learn about the past, marvel at the natural wonders, and take a hot walk. Along the way, your visit to the Kelso Depot Visitor Center will, however, get you up to date on some of the stories of the Mojave past, whether that be its Indian heritage, its mining history, or the ability to take a walk in the wild nature that time has carved in each rock and footpath. 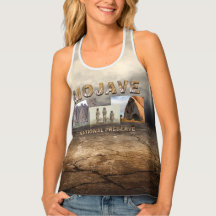 Mojave National Preserve and Castle Mountains National Monument T-Shirts and Souvenirs from the official merchandise of America's Best History. Great for your next western heritage adventure or to remember one you've already had. 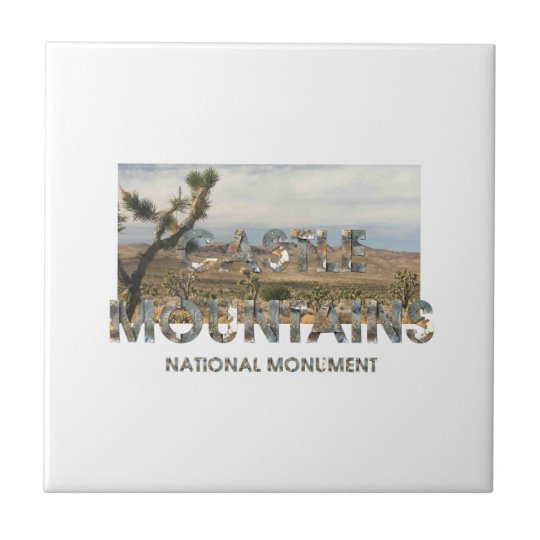 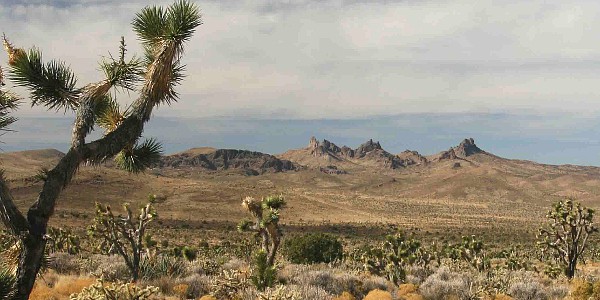 1. From October to May, the park rangers at Mojave National Preserve present a program of walks and talks at both the Kelso Depot Visitor Center and the Hole-In-the-Wall Information Center, plus outlying areas. You can walk and talk at a sand dune, visit Petroglyths from centuries past, or walk to a spring in the desert. Take the opportunity to follow a ranger into whatever actual or virtual wilderness or past they conjure. It's a treat and some of the best things about what the National Park Service does.

2. Take a drive. There are five roadways that most vehicles can muster that take you to the various sites of the park. If you have time, take a couple. On Kelbaker Road, you witness Cinder Cones, the Kelso Dunes, and the Granite Mountains. For a unique drive, go to class. The Zzyzx Road leads to Soda Springs and the California State University Desert Studies Center. At one time this was a 1940s health resort. You can walk around the lake in a self-guiding trail there.

3. Got a four wheel drive, then head into the deeper reaches of the park. There, you can climb a ladder into a Lava Tube, camp in Caruthers Canyon, or climb into the highest point of the park, Clark Mountain. Not everyone does these things, but you can. Be careful though. They are remote.

Kelso Depot Visitor Center - Located in the southwest part of the park, the former 1924 train depot has been restored in 2005 into the main park visitor center. Here, you can get oriented about the park, see a 20 minute film in the theatre, see Exhibits and various rooms that now replicate the train heritage days. There's also a bookstore, restrooms, and art gallery. Check here for the available ranger walks and talks for the day.

Hole-in-the-Wall Information Center - In this unique western structure in the central part of the park, there's information, restrooms, water, and a bookstore. The campgrounds are near here and ranger talks and walks are held from October to May, including evening programs on Saturday.

The sites of Mojave National Preserve may best be seen by taking a drive, then a walk - Sand dunes, lava domes, rocks with holes, and more abound throughout the park.

Kelbaker Road - Along this route, you'll pass the 26,400 acre Cinder Cones National Natural Landmark, where cinder cones and lava flows from thousands to millions of years ago flowed. You'll also eventually get to the Kelso Depot Visitor Center, the Kelso Dunes, and the Granite Mountains. 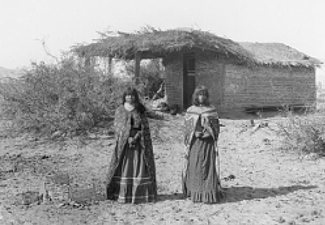 Mojave National Preserve is located off Interstate 15 between Southern California and Las Vegas. To visit the Kelso Train Depot Visitor Center, take Kelbaker Road in Baker, south for 34 miles. You'll be in the Mojave Preserve during the drive. From the east, you may take Cima Road to Kelso Cima Road prior to Baker.

If you're traveling on Interstate 40 south of the park, take Kelbaker Road north to the Visitor Center. It's about 22 miles from I-40. Again, during the entire trip on Kelbaker Road, you'll be in the Preserve. 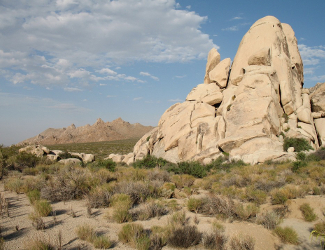 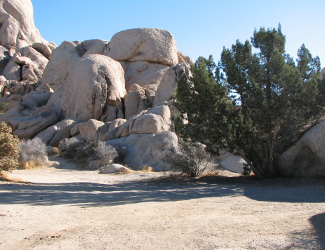 There is no lodging within Mojave National Preserve, and lodging it not plentiful in the surrounding towns, although there is some in the towns of Nipton, at the northern entrance, Barstow, at the western entrance, Ludlow, Baker, and Twentynine Palms, plus more in Nevada towns such as Primm, forty-five miles away, and Searchlight. Check your favorite online lodging site for the motel, hotel, or bed and breakfast of your choice.

There are two regular developed campgrounds, plus a group campground, in Mojave National Preserve, and backcountry camping is allowed.

Hole-in-the-Wall Campground has 35 sites with no utilities. Cost $12 per night. 4,400 feet elevation.

Mid Hills Campground has 26 sites with no utilities. Cost $12 per night. Both campsites are first come first served and located in the central part of the park. 5,600 feet elevation.

Black Canyon Equestrian and Group Campground must be reserved in advance and is located near the Hole-in-the-Wall Information Center. 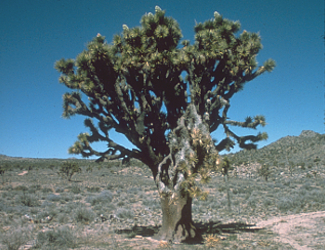