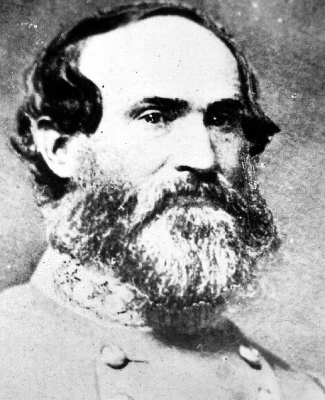 General Jubal Early, Confederate commander at the Battle of Monocacy and during the Shenandoah Valley campaign of 1864. Photo courtesy National Park Service. It was a bold plan, a necessary plan, and probably the only plan that Robert E. Lee could have devised during the summer of 1864 that might have worked. While General Grant pursued Lee in a relentless series of battles in the spring (think the Wilderness and Spotsylvania for two) and prepared to siege the Confederacy around Petersburg and Richmond, Robert E. had to devise a strategy to take the pressure off the main body of the Confederate Army. So he sent General Early through the Shenandoah Valley and toward Washington, D.C. If he could capture the capital or at least threaten it, Ulysses would have to divert his attention away from Richmond. And it almost worked, if it weren't for the Battle of Monocacy. Photo above: Monocacy National Battlefield as seen from the second floor of the Visitor Center, overlooking the Best Farm. 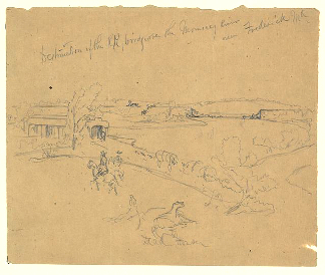 The Battle of Monocacy was not the largest battle of the Civil War. It was not even a Union victory in the fight to save Washington, D.C. from Robert E. Lee's plan and General Jubal Early's soldiers. What it was was necessary. Necessary in the delay of those Confederate soldiers getting to their rendezvous point, what would become the Battle of Fort Stevens, two days later, allowing reinforcements to get to Washington, D.C., which had been lightly defended and in jeopardy of capture.

The Battle of Monocacy was also a battle of remarkable courage for Union soldiers outnumbered two to one. General Early's force numbered around 15,000; General Wallace had about 6,600. It was a battle of tactical importance more than an assault for victory. So from a general standpoint, you could say the objective for the Union Army was met. The battle that waged around the three farms of Monocacy Junction on the day of July 9 cost the Confederate's bold plan one day. And it was a day that would prove its importance as the remainder of the summer and fall in the Shenandoah Valley was spent in a parry between Early and Union commanders while Grant and Lee dug in further south.

Frederick, Maryland was a prosperous region in 1864 and a hub of transportation with roads leading to both Washington and Baltimore, plus the Baltimore and Ohio Railroad at Monocacy Junction. The Union Army knew of its importance and had placed a permanent camp nearby to protect it.

The site of the battle occurred on three farms. The first ... the Best Farm, which had been of previous importance prior to the Battle of Antietam when the Confederate Army, which had been camped there, forgot to take an envelope with two cigars and General Lee's orders about troop movements with them, only to be discovered by the Union and used to their advantage in the days prior to the Battle of Antietam. Morale to that story ... take your trash with you when you leave your campsite or a national park.

The second farm ... Worthington. This farm was the furthest from town and the site of the second action on the battle.

The Thomas Farm ... the third farm, which is actually in between the other two, was the site of the heaviest fighting, but also the location of a later August 5, 1864 meeting between Grant and his generals, where he appointed General Philip Sheridan to roust Early's forces from the Shenandoah and lay waste to the area. This would culminate in the Battle of Cedar Creek in the fall.

Photo above: Drawing by Alfred R. Waud on July 9, 1864, of the destruction of the railroad bridge over the Monocacy River. Photo below: Home on the Worthington Farm, Monocacy National Battlefield. 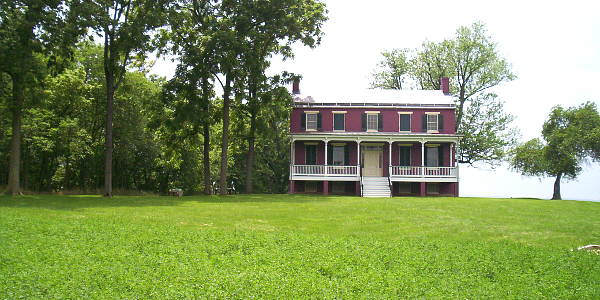 For the particulars of the battle and what you'll see when you go, is the three farms and a bridge that dominate the field. The Best Farm, nearest the visitor center, saw the opening moments of the battle. The Worthington Farm, farthest from the visitor center, caught the secondary action. In between them was both the Monocacy Junction bridge over the Monocacy River, this avenue of retreat that was burned in the middle of the day, and the Thomas Farm. The Thomas Farm, barn, and home were in the middle of the heaviest fighting, and both armies took turns capturing and losing its position as the battle was waged. Much of the interpretation on the battlefield centers around this farm, including some very creative programs in both structures, which we'll delineate later.

Today you can visit all three of these farms, represented in the three photos below. Although we may decry the encroachment of civilization in the area north of the Visitor Center, once you get to the farms, it's easy to get the feel for the 1864 landscape and times. There's a new bridge over the Monocacy River to get you across to the Thomas and Worthington farms, plus the Gambrill Mill tour stop. All around the battlefield, there are a variety of trails to take as well, if you feel like a walk. Some go through the middle of the farm fields that were fought over. Some go through the woods near the Monocacy River. Even though it's not a trail, the driveway up to the Gambrill House is worth the climb. Well, at least it was to us.

Check out our Monocacy Battlefield entry in our Minute (or Two) Walks in History. We'll take you across the battlefield to the three main houses and farms that were part of this important story to save Washington, D.C. The Best Farm, the Thomas Farm, and the Worthington Farm.

And if you don't mind traipsing past the suburban bustle, the downtown tour of historic Frederick is also a nice visit back in time. It doesn't focus on this battle, but other moments in Maryland history. Homes, churches, and a nice walk that might be to your liking. 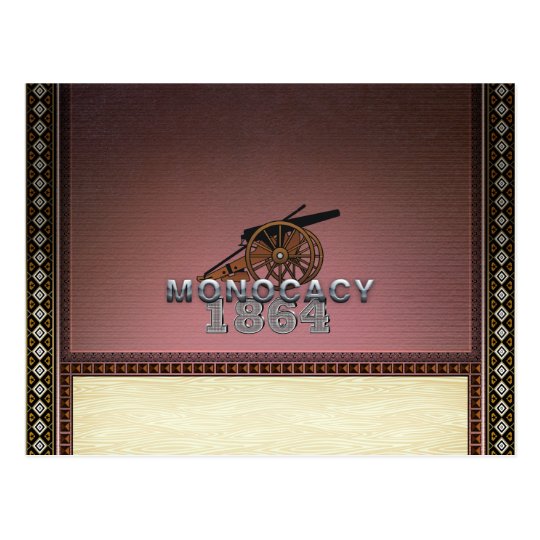 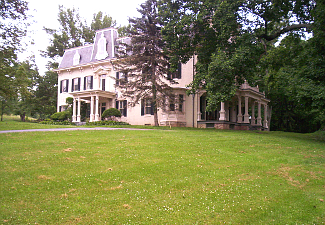 1. There is a new park visitor center just past the malls. This is on the left side of the road, the opposite side from the three farms. The visitor center has exhibits on the second floor, facilities, and a book store. There's also picnic tables outside if you packed your lunch. The exhibits are well planned and there is a small electric map toward the back door of the second floor that you should take in. It gives a good overview of the battle itself. Go out the back door and view the placards that describe the landscape. It's a good picture point. The top right picture on this page represents some of what you'll see.

2. We had the chance to visit during the first of these Talk and Movie nights, but if they have one during your stay, take advantage of the opportunity. Held on the Thomas Farm, the talk this day focused on the Trial of the Conspirators, the seven cohorts to John Wilkes Booth in his attempt to kill Lincoln, the Vice President Johnson, and Secretary of State Seward. One of the additional focuses of the Monocacy National Battlefield is the story of the race across Maryland by Booth as he tried to escape and the trials of those afterwards who helped him. After the talk, and a break for dinner, the movie by Robert Redford, The Conspirators, was shown in the barn. You don't often get the chance to watch a full Hollywood movie about the Civil War held on a Civil War Battlefield. It was a great treat. Do it if you have the chance.

3. If there's a ranger guided tour the day you go, take it. You get a much better idea of troop movements around the Thomas Farm (historic image above courtesy National Park Service) and what happened at that farm and the others from these tours, particularly at a park like Monocacy.

Photo above: Gambrill House on the Monocacy Battlefield. 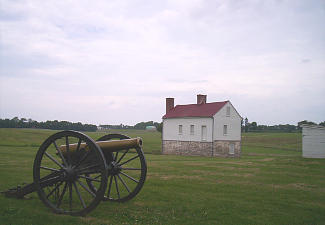 The Best Farm (photo above). Stop one on the auto tour. Site of the infamous lost orders in 1862 and opening salvos of the Monocacy battle.

The Monocacy Junction Bridge - Yes, not the same one that was burned and on a busy road, but you can envision its importance in your route to other stops on the auto tour.

The Worthington Farm - Nice quiet location of the second phase of the battle. Some park staff like to go there to read. There's a parking spot just off the road when you first take the bend, but you are allowed to drive deeper down the lane to a second location. Otherwise, it's a long walk.

The Thomas Farm - Site of the heaviest fighting of the day.

The Gambrill Mill - In 1864, the Gambrill Mill, built in 1830, was used as a Field Hospital. Although it wasn't there during the battle, built in 1868, the Gambrill House, also known as Edgewood, now sits on the hill overlooking the mill. It serves as the Historic Preservation Training Center for the park. Take a walk up its drive; it's a fine looking structure that's interesting to take a look at, even if it is post-war. 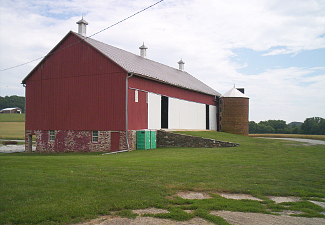 Unfortunately, at least to us, Monocacy National Battlefield is right along the Interstate 70 corridor, just outside the mallification of Frederick, Maryland. While the site itself, once you get past the mall, is pristine, there is those malls, and plenty of hotels and motels in the area to choose from. Check the local tourist bureau or online website for the lodgings of your choice.

There are a number of camping choices in the area, particularly up Route 15 or west off of Route 70. These include the state parks of Gambrill, Cunningham Falls, and Greenbrier. If you're on your way to Gettysburg, a good place to camp, thirty minutes or so away, is Catoctin Mountain Park, the national park where Camp David is located, or if you'd like the canal experience, there are campsites along the C&O Canal National Historic Park trail that weaves its way west through Maryland.

Photo above: Barn on the Thomas Farm, Monocacy. 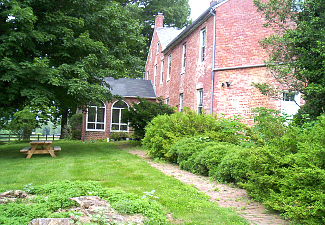 More Photos of the Battlefield 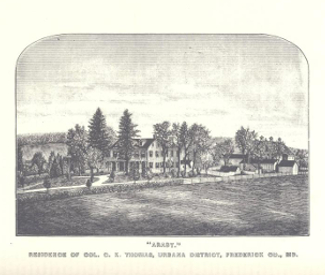 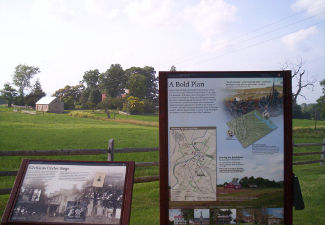 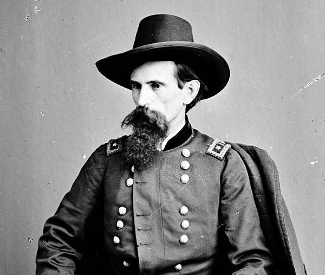 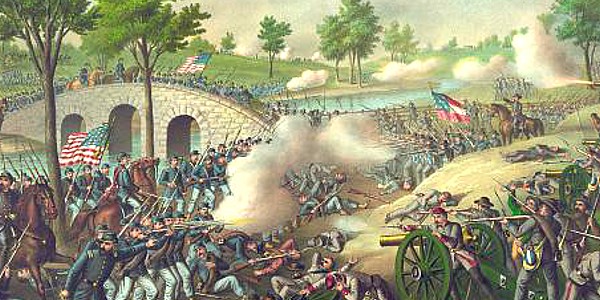