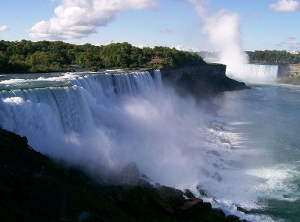 American Falls with Canada's Horseshoe Falls in the background at Niagara Falls. 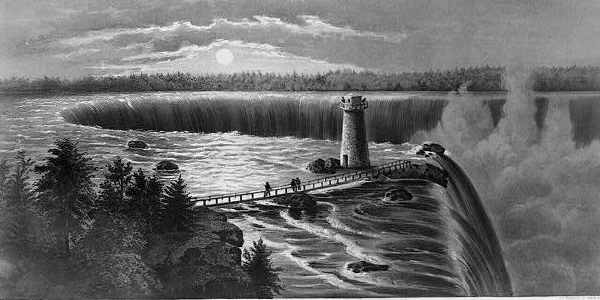 Yes, we know, it's not only the history of the United States, but Canada, too. There are two sides of this majestic natural historic equation, and two falls. And it is a bombastic phenomenom of nature that tumbles over the precipice to the river canyon below, all to the witness of the millions of people who come to Niagara (American) Falls in New York State or the Horseshoe Falls in the Province of Canada to witness the crashing water of the Niagara River as it makes its way from Lake Erie to Lake Ontario to the St. Lawrence Seaway and to its ultimate destination, the Atlantic Ocean. It's funny that, at least decades ago, this spot became a favorite for those on a honeymoon, which it still is for some, and expanded to those wanting a thrilling voyage beneath the water on those Maid in the Mist boat tours. When you stand at the railing on either side of the waterfalls, it's hard to imagine why anyone would want to thrust themselves over the side of them in a barrel. But some have. It's not hard at all to imagine why you'd want to visit the thrilling natural wonder of Niagara Falls, however. One whiff of the water in the air and roar of the thurder as it moves on its natural course can tell you the reason in an instant.

But Niagara Falls is more than just a natural wonder of beauty and power. It is in that power where much of its history lies. It is the single greatest natural source of water power in the United States, providing hydroelectric power to New York, Pennsylvania, and Ontario. That power began to be harnessed back in 1852 when a hydroelectric canal was dug; it provided power to the village in 1881, and power to a larger area by 1895.

Of course, the history of Niagara Falls began way before the river could be harnessed, with Indian culture, then white settlement from the days when Father Louis Hennepin sketched the falls in 1678 to the time of Sieur de la Salle and Fort Conti. Later, as Fort Niagara, the site would be captured by British forces in a 1759 battle. Today you can learn about this history at a variety of attractions as you marvel at the beauty and adventure that surrounds the vacation aspects of the dual United States and Canadian opportunities. Don't forget your passport now, more than a bit of a hassle in these times, but necessary if you want to visit both corners of the Niagara universe.

Niagara Falls in at the midway point of the Niagara River, which in just thirty-five miles long, but 326 feet higher at its nexus at Lake Erie than its end at Lake Ontario. Thus the falls. Grand Island is the center divide of the area the cordones the river into two streams (well, hardly streams) which form the American Falls and Horseshoe Falls. How much water travels over the falls. Try 500,000 tons per minute.

The falls are an everchanging landscape, mostly due to the pounding that the rock takes from the water minute after minute. It is estimated that Horseshoe Falls moves moves at 3 feet per year.

Niagara Falls State Park - Established in 1885 by the New York State Government, the 430 acres of park surround the falls. From here you can start your American Falls adventure, including the Cave of the Winds Tour, the Maid of the Mist journey, the Niagara Aquarium, the Gorge Trip, the Discovery Center, Adventure Movie, and more.

Queen Victoria Park - Established in 1886 by the Canadian government on their side of the river, this 196 acres of park surrounds the falls. There are a bunch of other parks in the Niagara Park system, including Devil's Hole State Park and Whirlpool State Park. From there and the surrounding area, you can take a walk among beautiful flowers overlooking the falls, go on a journey beneath them in the Journey Behind the Falls tour, or suspend above them on the Whirlpool Aero Car, which has been whisking away those on this adventure since 1916. 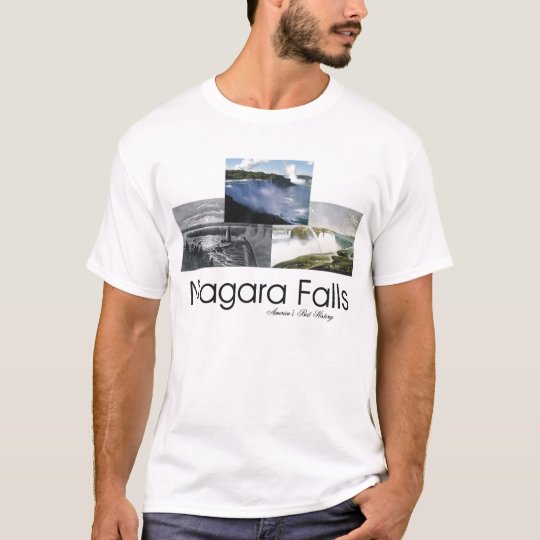 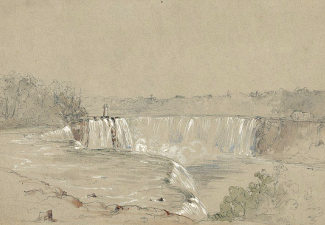 1. Take the Cave of the Winds tour. Whether you decide to take the Hurricane Deck or Gorge Trip versions, the get wet poncho excursions begin with an elevator ride and take you to about as close as you can get to the water of the American Falls.

2. It's traditional, but it's so great. If you'd rather ride and not walk, go on the adventure of the Maid of the Mist. For thirty minutes you'll take a boat to the base of the American and Horseshoe Falls. Hope you don't mind getting wet here either.

3. Stay up late and get a view of the magnificent illuminations of the falls, plus the fireworks shows above them during the summer months. The fireworks take place a couple times per week from May 15 to September, and once per week till the beginning of October. Check the visitor centers for times and dates before you come.

Photo above: Drawing of Niagara Falls from the rock above the ferry on the American side, July 8, 1853, George Wallis. Tower between the falls is Terrapin Tower, which had been built in 1833. It was destroyed in 1873. Courtesy Library of Congress. 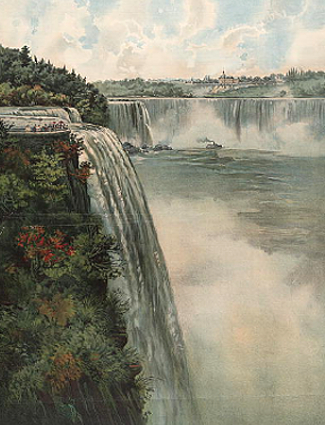 Niagara Falls Canada Attractions - There's so much to do on the Canadian side, it's hard to know where to start. So we'll just list a bunch. I'm sure some are to your liking. Try the Niagara Spanish Aero Car or the Skylon Tower, if you're not afraid of heights. Or Queen Victoria Park if you're more based on the ground. There's museums here from Ripley to Wax to IMAX Theatres to Incline Railways. Check out the visitor services to find out more about each and other attractions.

Photo above: Another view of Niagara Falls. Courtesy Library of Congress.

Fort Niagara State Historic Site - Want to get away from the water, well, not really, because you'll be overlooking Lake Ontario once there, but travel a bit out of town to Fort Niagara and witness the history of the fort that protected the American side from those Canadians or British or French, whatever. You'll hear the history of the Indians nations and continential settlement, the times of the American Revolution, and the recapture of the Fort by the British in the War of 1812.

Photo above: A soldier's wife at Fort Niagara lifting cannon balls during the War of 1812. Engraving by T. Walker, Virtue and Co., 1860. Courtesy Library of Congress. 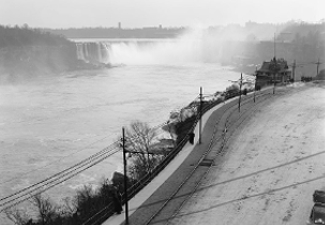 There are plenty of hotels and motels in the Niagara Falls area, both on the United States and Canadian sides at a variety of prices that should meet your budget needs. Check out your favorite online travel site for the hotel, motel, or for camps+ites nearby. 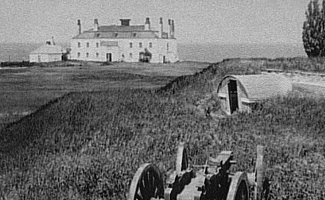