For many of those in the United States today, their vision of D-Day, and the Allied invasion of Europe during World War II, is culled from the movies, portrayals like Private Ryan done by Steven Spielberg and starring Tom Hanks. For the men who took the beachhead at Normandy during that fateful day of June 6, 1944 when American soldiers, sailors, airmen, and marines took part in the invasion to oust Adolf Hitler and Germany from France, with the rest of Europe to follow, it was an act of such heroism, of such valor, on the shores of a foreign land, that it changed the course of world history, and American history, forever. 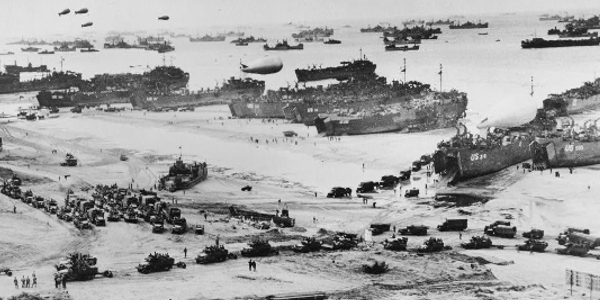 President Franklin Roosevelt had been hesitant to become involved in the fight, restraining from assistance to European powers besieged by the blietzkrieg of the German nation and its Axis friends. It took the attack on Pearl Harbor to change this thought. From the moment of December 7, 1941, the United States had been involved in the struggle, at first attempting to recover from the devastating losses to the Pacific Fleet and to respond to the threats of the Japanese in the Pacific Theatre, but also in concert with its allies in Europe, to plan a response to the German aggression that had overrun Poland, the Baltic States, France, and other mainland European territory already and was threatening the very survival of the British isles. Allied forces began a variety of offensives, with U.S. assistance, in North Africa under General Eisenhower, and Italy under General Alexander, with an allied air offensive taking place throughout Axis controlled territory. The allied invasion of France remained in the planning stages during this time.

It had taken only seventeen days for Hitler's forces to overtake France since the new offensive began June 5, 1940. They overtook Paris nine days later, and signed an armistace of surrender on June 22. Officially, the French government surrendered control of the northern and western parts of the country, but continued governing the south from Vichy. A strong resistence movement began, headquartered in London under General Charles de Gualle. An assault across the English Channel had been discussed in 1942, with a major raid on Dieppe providing valuable information. Preparations for the Normandy invasion began under the codename Operation Overlord in early 1943. General Eisenhower would lead the Allied Expeditionary Force.

In the largest amphibious assault in history, the allies had six thousand nine hundred ships, including more than four thousand landing boats, and twelve thousand airplanes. One day of heavy weather caused a postponement to June 6 when the first wave of infantry hit the beaches on a fifty mile front at 6.a.m. U.S. troops landed on both sides of the Vire River, with British and Canadian soldiers pushing ashore at other points in the line. There were a total of five beachheads, from Utah in the west to Sword in the east, with Omaha, Gold, and Juno in between. One hundred and fifty-five thousand Allied troops were involved in the Normandy invasion on D-Day. By June 30, the invasion would include over eight hundred and fifty-thousand men.

The Allies at Normandy - During the invasion of Normandy and the weeks that followed, troops from Australia, Canada, Free Franch, New Zealand, Norway, Poland, United Kingdom, and United States took part.

The Axis Powers at Normandy - German forces were the only troops encountered during the Normandy invasion.

The Advance from Normandy - When St. Lo fell to Allied troops on July 18, the U.S. First Army under Lt. General Omar Bradley broke out of the Normany peninsula to invade the rest of France. By August 6, Patton's Third Army had cut off the Brittany Peninsula. French soldiers and U.S. First Army forces entered Paris on August 25.

Pointe du Hoc - This cliff four miles west of Omaha Beach and east of Utah Beach was an attack point of the U.S. Army during the battle. It was part of the Atlantic Wall built by the Germans with six casemates housing a battery of 155mm guns. The U.S. 2nd Ranger Battilion assaulted the stronghold and successfully prevented the important position from remaining in enemy hands to threaten both the Omaha and Utah landing points. A memorial, museum, and the fortifications are now on the site.

Museums and Tours - A variety of small museums dot the area around the Normandy beaches, honoring the various divisions from the nations that participated. Many streets are also named in honor of those that gave their sacrifice to free the French nation from the clutches of Nazi Germany. Many tours abound in the area. Check the local or national tourism agencies for a list of those available to your interests. 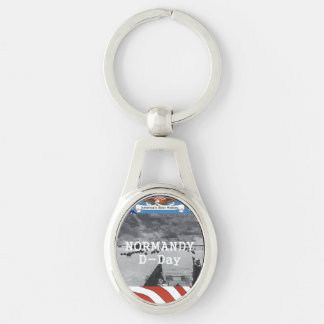 Check out history souvenirs and gifts from the official gear of Americasbesthistory.com. 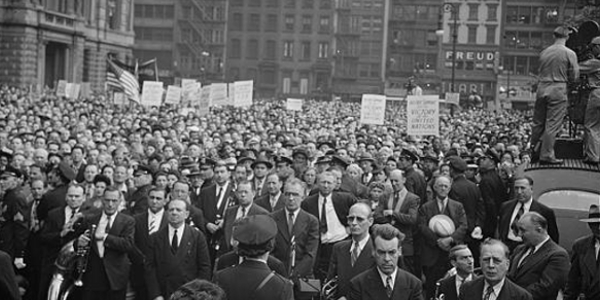 1. Take a walk down the Normandy beach, either by yourself or in a tour, and try to imagine the horrors of war for those men taking that beach under heavy Germany fire.

2. Take a moment to gaze across the markers of the American Cemetery at Normandy. As many have noted, this greatest generation of Americans saw many of their brethren give the greatest sacrifice to protect the United States, as well as recapture the nations of Europe from Axis domination. The original Normandy cemetery was established two days after the invasion at St. Laurent, north of the current site. The current cemetery is managed by the U.S. government. It includes the graves of 9,387 Americans killed in the invasion and other battles of World War II. All face east toward the United States.

December 7, 1941 - Japan attacks Pearl Harbor. U.S. declares war on Japan the next day, and on Germany and Italy one week later. 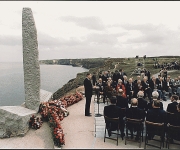 The Historical Area of the Battle of Normandy Includes eight signposted routes that are designed to understand the events and sites of the battle.

Normandy American Cemetery - This cemetery (photo above right) at Colleville-sur-Mer, France, on a cliff above Omaha Beach, is one of several large cemeteries in the area, including ones for German and Polish troops.

Picture above of President Ronald Reagan giving a speech at the 40th Anniversary of D-Day ceremonies at Pointe du Hoc in 1984. Courtesy NARA. 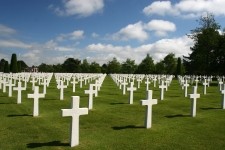 The Allies in World War II

Image above: The U.S. Cemetery at Normandy. 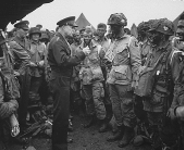 Above photo, Allied commander General Dwight D. Eisenhower talking to paratroopers one day before they participated in the first wave of the invasion.

Troops and Casualties - One hundred and fifty-five thousand troops took part in the invasion of Normandy. Total casualties during the battle were 10,264 allied troops and between 4-9,000 German. The United States had sustained 1,465 dead, 5,138 wounded, missing, or captured. During the entire war, U.S. casualties were over 1,076,000 with 405,000 dead. 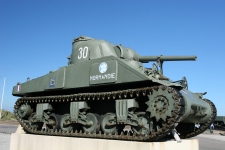 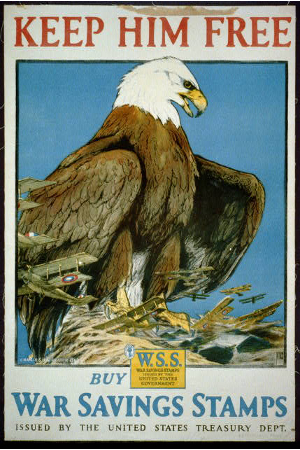