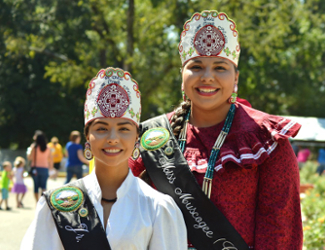 The heritage of the Ocmulgee Mounds and the traditions of the Muskogee Creek Indians has been around for centuries, but the park itself, inaugurated in 1934 as a National Monument, has been getting increased notice since its new designation as a National Historical Park by the Trump administration in 2019, doubling its size, and a further push by area officials and residents to grow it to national park status with expansion into the the Bond Swamp National Wildlife Refuge and down the corridor of the Ocmulgee River to Hawkinsville. While that might be a future thing, there's so much history here to explore in the newly NHP expansion, which the park thinks will significantly increase its visitation, that the time may be now to tour. Think human history seventeen thousand years old. Think Indian heritage of the Cherokee, Chickasaw, Muscogee/Creek, and Seminole, all around what would become today's Georgia, both good and bad. Think the European settler history of Macon, Georgia, which even way back in 1832 was established as a city in a park, with the Indian mounds of the tribe hovering over the town. 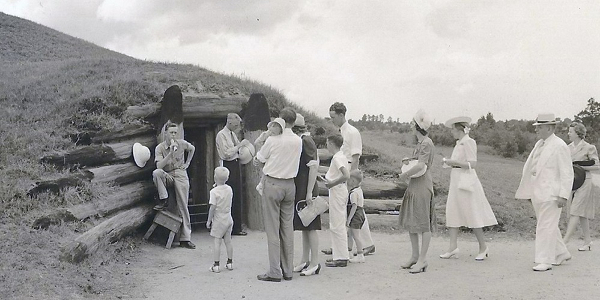 Without reaching back all those thousands of years, the Muscogee Creek heritage, which the park specifically heralds, can be witnessed with these earthen mounds that date back to 900 A.D. Mounds such as the Greater Temple Mound, the Lesser Temple Mound, the Earthen Lodge, and more, show examples of the culture and settlement on the Macon Plateau.

Native accounts of the Ocmulgee area were first reported by Europeans during the Hernando de Soto exploration of 1540, with his visit with the chief of the Ichisi, likely on the Lamar site three miles south of Macon. A British Fort was built in 1690, which the Muscogee, called Creek by the British, engaged in trade. Fort Benjamin Hawkins was built in 1806 during the Jefferson administration on Creek land near the mounds. Eventually, European colonization pushed the Creek from the area, with the Treaty of Indian Springs, 1825, leading to the establishment of Macon in 1828 during the presidency of Andrew Jackson and his policy of Indian removal west. The Trail of Tears would remove the remnants of the Indian tribes from the southeast during the 1830's. Destruction of the sacred ground of the Muckogee Creek would continue when the railroad was constructed through prehistoric mounds and sites on the Macon Plateau in 1843.

The Ocmulgee Mounds National Monument was established on June 14, 1934, including the Lamar site downriver, with approximately seven hundred acres of the cultural mounds preserved. 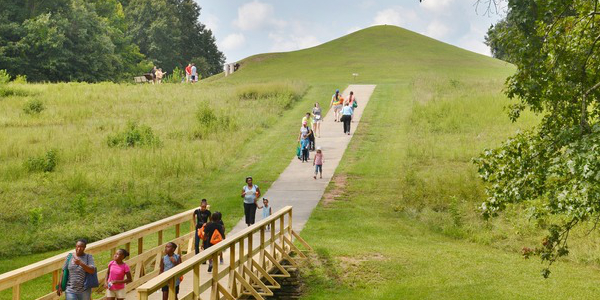 With the establishment of the National Monument in 1934 during the Great Depression, park features were preserved and established by the Civilian Conservation Corps of the Works Progress Administration. Archaeological digs unearthed eight mounds between 1933 and 1942.

Today a Visitor Center tells the story of the mounds and indigenous culture. A short film, orientation, exhibits, and visitor facilities are included, as well as a book shop. There are eight miles of trails to walk, those eight mounds, and more to visit with many of those trails leading directly to them, as well as other features of the park, some even Civil War era and battle oriented, including the Dunlap House, now used by the park superintendent. 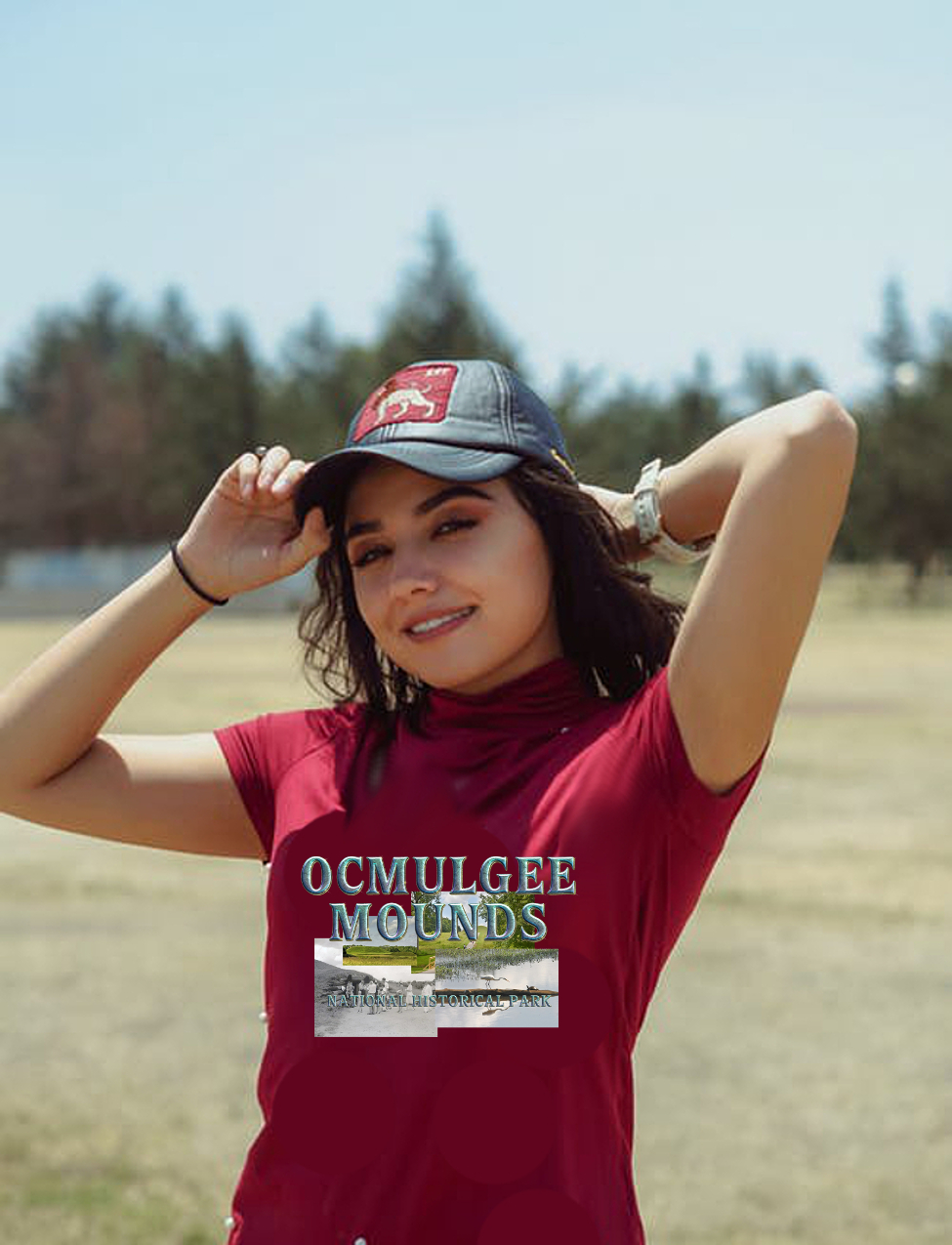 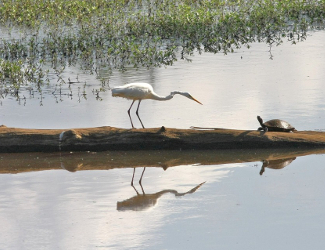 1. Visit a mound. A bit of an of course, but you just can't visit Ocmulgee without immersing yourself in the culture of the Great Temple and Lesser Temple Mounds, as well as most of the others. Each has their own uniqueness and some have lots of steps. Go inside the Earth Lodge, a treat for visitors since the day of the CCC.

2. Take a hike. Eight miles of trails and one of the shorter ones, the Dunlap Trail, will take you to earthen works for another period of Georgia history, the Civil War. The earthworks are one of the few that survive in the Macon region and were built after the Battle of Dunlap Hill (Stoneman's Raid), July 30, 1864, and used during the Battle of Walnut Creek, a skirmish on November 20-21 of that year. Both battles took place on the grounds of Ocmulgee National Historical Park.

3. If you get the chance to visit during September's Indian Heritage Days, take advantage of the events that celebrate the Muscogee Creek heritage of the region. Another event of special interest are the March Lantern Light Tours. Check with the Visitor Center for the exact event dates. 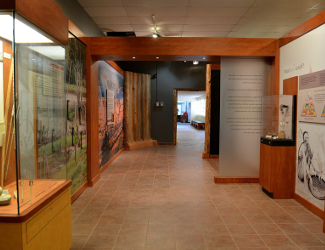 Park Trails - There are over eight miles of trails inside Ocmulgee Mounds National Historical Park. North of the Visitor Center, a quarter mile trail leads to the Dunlap Mounds and Civil War earthworks. The Bartram Trail, Opelofa Trail, and Heritage Trail lead to the various other earthworks and mounds of the park.

Ocmulgee Mounds - Either accessed through the park loop road or the various trails mentioned above, the mounds of the park include Dunlap, McDougal, Cornfield, Southeast, Funeral, Greater Temple, and Lesser Temple. Other features to visit include the Trading Post Site, Village Site, and the Earthen Lodge. 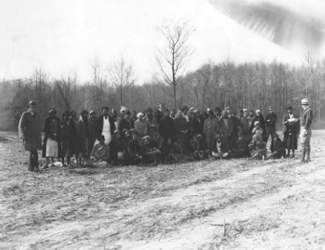 Battle of Dunlap Hill, Stoneman's Raid, July 30, 1864 - Nine thousand cavalry in two columns had been sent by General Sherman south to cut rail lines to Atlanta three days before. General George Stoneman, with over two thousand men, traveled down the east side of the Ocmulgee River, and decided to attempt a capture of Macon and perhaps free Union prisoners from Andersonville and Oglethorpe. That didn't work out. The Confederates knew he was coming and the reserves and militia under General Howell Cobb forced a retreat. Stoneman headed north, but ran into more Confederate cavalry at Sunshine Church; seven hundred of his men were captured, including Stoneman. Biggest takeaway from the outcome of these battles was the capture of General George Stoneman, who became the highest ranking officer for the Union who became a prisoner of war. Stoneman was a prisoner for three months.

Battle of Walnut Creek, November 20-21, 1864 - The Dunlap Farm, now part of Ocmulgee Mounds NHP, became part of the Civil War again four months later. The defenses of Macon had been augmented since the beginning of Sherman's Atlanta campaign, so when Union General Kilpatrick came back in November, prompted by the move of the capitol to that city by Georgia's governor Joseph E. Brown and part of Sherman's strategy to pin part of the enemy away from his March to the Sea, nine guns had been placed for its defense. Kilpatrick made an initial charge, had limited success, but retired from the field after sighting a second line of Confederate reinforcements and taking fire from Confederate guns at Fort Hawkins. 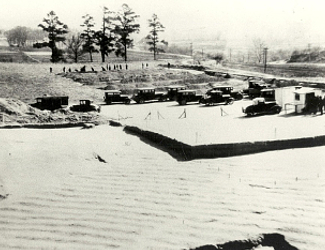 Ocmulgee Mounds National Historic Park is located just outside downtown Macon, Georgia, 85 miles south of Atlanta off Interstate 75 and I-16. The address is 1207 Emery Highway, Macon, GA 31217. Across the street from Ocmulgee is another unique historic site, a blockhouse reconstructed of Fort Benjamin Hawkins, also worth a visit.

There are no camping or lodging units within the park itself, but a variety of lodging choices are nearby in Macon, only two miles away, as well as up and down the I-75 corridor. Check out your favorite travel site or the visitor bureau of the area for lodging choices that suit your needs.

There are campsites located nearby at Lake Tobesofkee, a Macon-Bibb County site, that also has a water park, and three parks Claystone, Sandy Beach, and Arrowhead. Claystone and Arrowhead include year round campgrounds for tents and RV's.

Photo above: Historic image of the escavation of the cornfield mound. Courtesy National Park Service. 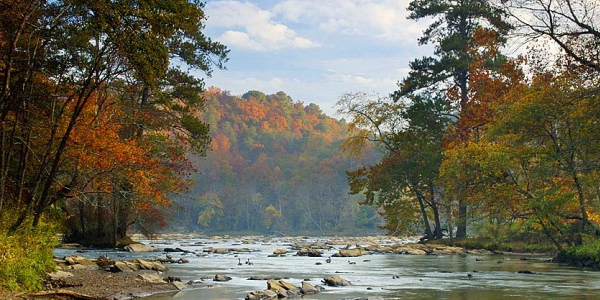