Photo above: The Land Office line at Perry on September 23, 1893. Photo right: View of Oklahoma City in the Indian territories in 1889.

The scene played out across the prairie landscape as homestead families waited for the rush. For those who have seen Far Away, the Ron Howard film of an Irish immigrant and his girlfriend, starring Nicole Kidman and Tom Cruise, it is an unmistakable image. Covered wagons filled to the hilt with supplies, men on horseback waiting to race toward the best plot to stake their flat in one hundred and sixty acres of soil, formerly Indian lands, and claim their spot for the American dream. Of course, for some it was more of a nightmare than a dream in the end, but for many it was just that, the dream of owning a parcel of land in the Oklahoma dust. 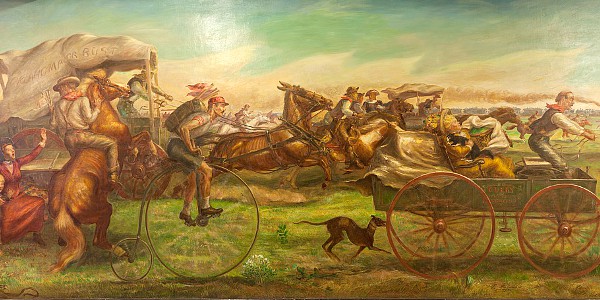 The Homestead Act of 1862 had started the process across the western lands. It would, along with expansion of the railroad into the territories over the next forty years, cause a wave of western settlement that would forever change the prairie from the Dakotas to Texas. Two hundred and seventy million acres would be given over to the public from Federal lands, all for only an $18 filing fee. In Oklahoma, white settlers who had been using some of the Indian lands for grazing continued to urge additional settlement rights on this land from the government. These boomers, from C.C. Carpenter to David L. Payne to William C. Couch, finally won these rights when the government bought three million acres of land from the Creek and Seminole, and made one million nine hundred thousand of it open for settlement at noon on April 22, 1889. Boomers waited on the border of the unassigned lands in Kansas border towns such as Arkansas City and Caldwell, at Purcell, Fort Reno, Guthrie, Edmond, Oklahoma City, Verbeck, and Norman. When a pistol shot signalled the opening, fifty thousand people began a frantic race. Some had jumped the gun, however, leading to the Oklahoma term, Sooner. One month later, the Indian Territories had become the Territory of Oklahoma through a decree of Congress.

Oklahoma City - By the end of the first day of the Oklahoma Land Rush of 1889, it had grown to more than 10,000 people. Orlando, Oklahoma Territory - Thirty-six thousand people registered for land at Orlando, Oklahoma Territory on September 15, 1893. Additional lands were opened up in Oklahoma through the Homestead Act after the final land rush of 1895. These lands were determined by lottery. August 1, 1901, the Wichita-Caddo, Comanche, Kiowa, and Apache lands were the last large land opening in the state.

Photo above: Painting at the Department of Interior by John Steuart Curry, 1939, "The Oklahoma Land Rush, April 22, 1889." Photo taken by Carol M. Highsmith, 2011. Courtesy Photographs in the Carol M. Highsmith Archives, Library of Congress. Below: One of the period buildings at Homestead, the Freeman School. Courtesy National Park Service. 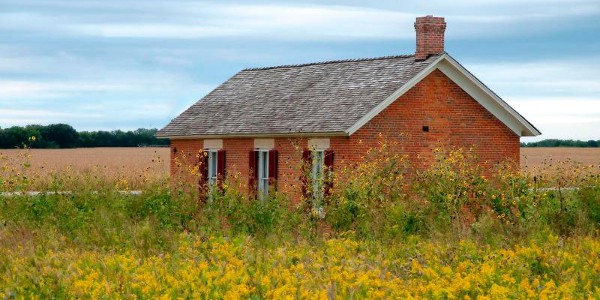 How it affected the Cities? This was certainly a boom or bust time, for individuals looking for land to find their fortune, as well as for towns looking to become cities and wanting to make a name for themselves. Some became well-known and prosperous such as Oklahoma City over the next hundred years; others hit their zenith on land rush day.

Oklahoma City - Capitol of the state and home to almost 500,000 people.

There is not a single comprehensive site that tells the story of westward expansion, the Oklahoma Land Rush, or the Homestead Experience, but a myriad of historic sites dotting the landscape and trails of Oklahoma, Nebraska, Kansas, and beyond. 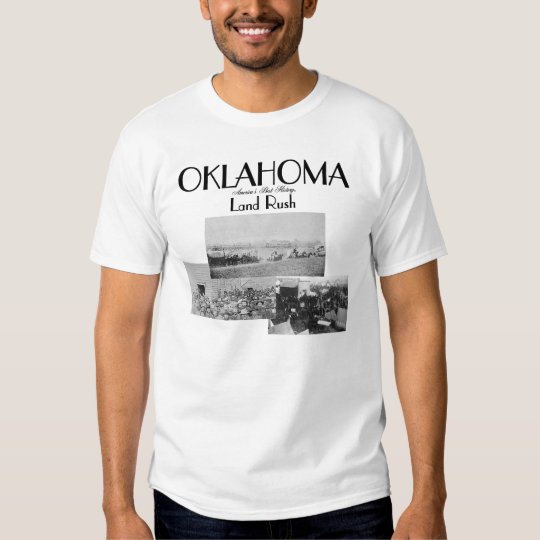 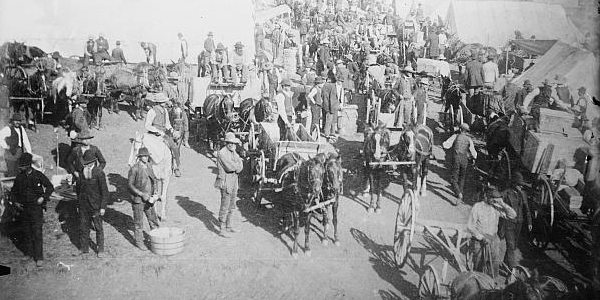 1. The Oklahoma History Center. This museum coves the breadth of Oklahoma history on eighteen acres, with an 215,000 square foot learning center. It is located across from the Governor's mansion.

2. Fort Reno and the Canadian County Museum. Fort Reno was established in 1874 to stem the Indian problems and played a role in the Land Rush proceedings by protecting the order of the rush. Both the fort and museum contain a number of historic buildings and exhibits.

3. Homestead National Monument. No, it's not in Oklahoma, but it covers the topic of homesteading, pioneers, and land rushes with exhibits and period buildings.

Dates of the Oklahoma Land Rush 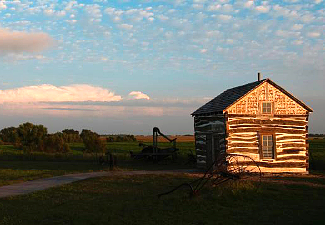 The Oklahoma History Center
Two thousand artifacts about Oklahoma's past.

Canadian County Museum and Fort Reno - Located at the confluence of the Chisholm Trail and Route 66, this land rush border town holds a number of interesting historic sites, including General Sheridan's Cabin, the first Red Cross Canteen in the nation, and Fort Reno.

Break O'Day Farm and Metcalfe Museum - Located in Durham, Oklahoma, this farm was the homestead of the Augusta Corson Metcalfe and the Metcalfe family in 1893. An inductee of the Oklahoma Hall of Fame and the Cowgirl Hall of Fame, she was also a well regarded painter. The farm is located near the thirty-one thousand acre Black Kettle National Grasslands.

Homestead National Monument of America - Although outside Oklahoma, the Homestead National Monument is a national park devoted to the subject of the Homestead Act of 1862 and the various methods that the lands of the west were settled, including the land rushes of the western states. The Homestead Act transferred 10% of the United States, 270 million acres from Federal to private ownership. The Homestead has a new Heritage Center, dedicated in 2007, and will premier its new film, Land of Dream Homesteading America in spring of 2008. Admission is free.

Museum of the Western Prairie - Contains artifacts and exhibits on the history of southwest Oklahoma and Greer County.

Stuhr Museum of the Prairie Pioneer - This Nebraska living history experience in Grand Rapids includes a historic railroad town, Pawnee earth lodge, plus other exhibits on the Prairie and homestead lifestyles.

The sites of the Oklahoma Land Rush are spread across a wide range of land. Check out your favorite online lodging site or tourist office for the best locations to stay for you and your family.

Photo above: Boomer Camp in Arkansas City, Kansas, waiting for the Kansas strip to open on March 1, 1893. Below: Montage of engravings about the founding of Oklahoma cities, including top, laying out of the first lots in Guthrie; center, the first bank of Guthrie; bottom, Oklahoma City, 1889, Harper's Weekly. Courtesy Library of Congress. 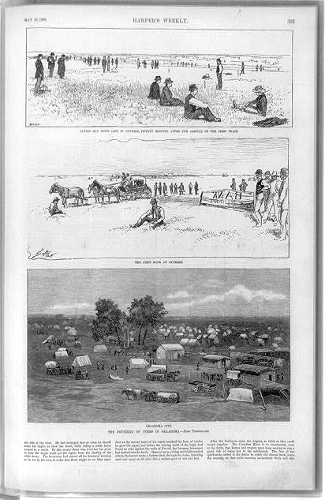 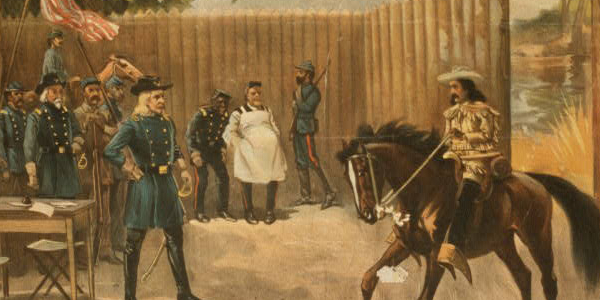 "Most of the boomers who crossed the river at Purcell took up quarter sections of land that they had selected many weeks before; a few tried to organize a town on the flats opposite Purcell, while the others went on to Oklahoma City and Guthrie. Hundreds of boomers came into the southern part of Oklahoma from the Pottawotamie Indian country on the east and from the lands of the wild tribes on the west. As these portions of the border are not protected by soldiers, most of the boomers crossed the line long before the appointed time, and hid in the woods until Monday forenoon, when they emerged from their hiding-places and boldly took up their claims."

Photo above: Portion of the playbill from the play, Madeleine of Fort Reno, 1897, showing a representation of Fort Reno, A.S. Seer Print. Courtesy Library of Congress. Below: One Oklahoma Land Rush scene as the first train and wagons leave the line in a mad dash on September 16, 1893, outside Perry, Oklahoma Territory.