Photo above: Conestoga wagon as it sits on the Oregon Trail at Scotts Bluff National Monument, during a reenactment in 1961. Photo courtesy of NARA. Right: Independence Rock on the Oregon Trail in Wyoming. Photo from Hayden Survey, William H. Jackson, 1870.

The trails of western expansion, the routes of the cattle trade, Indian paths from summer to winter quarters, the route for Lewis and Clark, the trails that lead wagon trains from east to St. Louis, then west to the coast. From the Chisholm Trail to the Oregon Trail, these pathways led European settlers across dangerous Indian lands, caused a scandal of shame to permeate the U.S. government as Indian lands were confiscated, or bought, or bartered for, for towns, farms, land rushes, and what some would call progress. 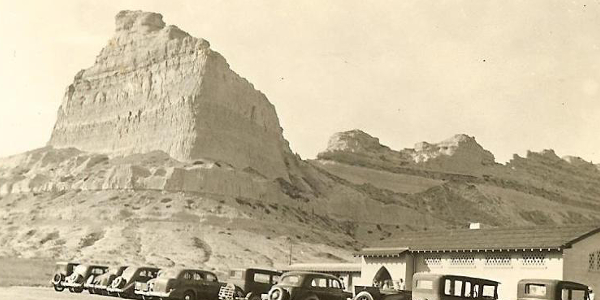 There was no doubting that the history of the Oregon Trail is one of the most dynamic in the history of the United States. As many an easterner took flight west, looking for a promised land they had not yet even seen, some culled by the romance of dime store novels of western heroes and others drawn by lands where you could homestead one hundred and sixty acres for an $18 filing fee, the men who led the wagon trains across a rugged land were characters of lore. And it was a lore the history of the United States fell in love with, during its enaction, in stories, and later on movie screens. Even today, many know of the Oregon Trail from the most modern of entertainments, a video game, or for those who try to gain a little more authenticity, from period era reenactments, as shown in the photo of the wagon train above as a mountain man leads Conestoga wagons past a rock formation from the Scotts Bluff National Monument in the early 1960s.

The Oregon Trail overland route was developed as an easier alternative to the Lewis and Clark trail blazed in 1803, with Lewis and Clark traveling over the western part of the Oregon Trail during their trek in 1805. Robert Stewart of the Astorian fur trading group was the first to traverse this route in 1810 during his ten month journey from Fort Astoria to St. Louis. The trail was 2,170 miles long, beginning in Independence, Missouri, and winding its way past Fort Kearney in Nebraska to Fort Laramie, Independence Rock, and South Pass in Wyoming, along the Snake River in Idaho, then into Washington to Marcus Whitman's Mission and Fort Vancouver, before heading into the Willamette Valley in Oregon. Independence Rock, a noted landmark on the trail, that contains the names of noted trappers, travelers, and explorers who etched them into the rock from 1835 forward.

Completing the trail was an arduous test of stamina, taking six months in a covered wagon to cover all those treacherous miles, enduring a lack of food and water, Indian attacks, and sickness. Explorers and fur traders initially tracked the trail with the first wagon train negotiating South Pass in the 1830s, and the Presbyterian missionaries of Marcus Whitman and his wife, Narcissa, reaching Walla Walla in 1836. The migration of trains had its first success in 1841, but began in earnest in 1843 when a one thousand member wagon train left Independence, Missouri, crossed the South Pass, and made it to Oregon. Immigration using the Oregon Trail peaked in the 1850s, but settlers used the trail to cross the country into the 1860s.

The Oregon Trail - Photo top left. From the top of a mountain looking west over Devil's Gate in Fremont County, Wyoming, with the plains of the Sweetwater, Oregon Trail, and the Seminole Mountains in the background. Survey expedition wagon sites below in the valley. This photo was taken during the 1870 expedition of the Hayden Survey, photo by William H. Jackson. 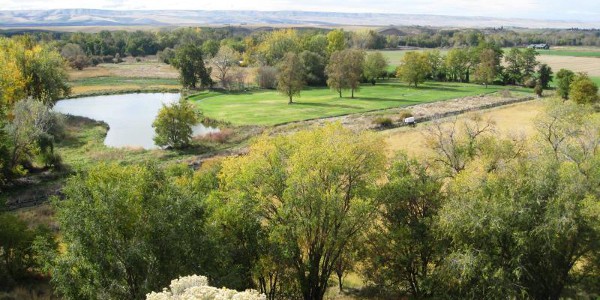 Tracing the Oregon Trail today, you can still see many sections of the rutted depressions where the wagon wheels of the western expansion ancestors turned. There are a variety of attractions along the way, many now beginning to be pulled into the National Park Service's Oregon National Historic Trail project, which includes auto routes, some still in the development stage.

The myriad of historic sites along the Oregon Trail is aplenty with opportunities for heritage tourism, with museums, hiking trails, horseback riding, and many interesting interpretive sites, and natural vistas that were there during pioneer days. Visit the Oregon National Historic Trail website at the National Park Service for new about the effort of the trail to coordinate some of the interesting sites along the way. Besides those listed there, existing National Park Service units and State Historic Sites also hold part of the story of the men, women, and their families who made the trek. Listed below in the What is There Now section are some of the noteworthy, but the actual list is much longer for certain. 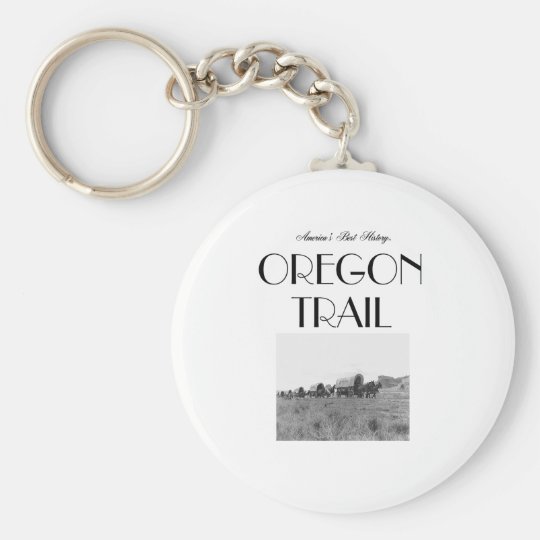 Oregon National Trail T-Shirts and Souvenirs from the official merchandise of America's Best History. Great for your next western vacation or planning session. 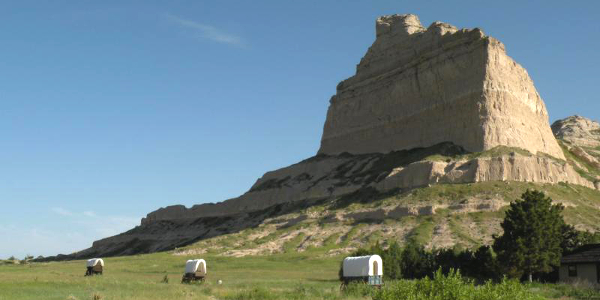 1. Visit Fort Laramie. A great example of both the vestiges of the U.S. Army and their role in taming the west, as well as the Oregon Trail and its use as a road for westward expansion.

2. Make sure you visit Independence Rock, the famous landmark, which is now a Wyoming State Park, that contains the names of seven hundred explorers, settlers, and military men who passed by during their days on the Oregon Trail.

3. Scotts Bluff National Monument is a wonderful historic spot in Nebraska that tells the immigrant story, as well as the paleontological and Native American story of the region. 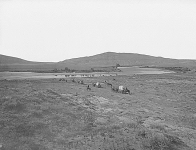 Chimney Rock National Historic Site - One the most famous natural landmarks in the American West, this Bayard, Nebraska formation, now historic site, includes a Visitor Center and hands on demonstration, including pack your wagon.

Photo above: A view of the Red Buttes at Bessemer Bend on the Oregon Trail at the location where the trail left the North Platte River for the Sweetwater River. The photo was taken during the Hayden survey in 1870. This location was the approximate spot where twenty-three United States troopers were massacred in 1865, concurrent to the death of Casper Collins, namesake of the town of Casper, Wyoming, at the bridge. Courtesy National Archives.

Fort Laramie National Historic Site - Established in 1849 from the old Fort John, a fur trading fort built in 1834, it served as a military outpost on the Oregon Trail. The fort was an open fort, without a stockade, and its troops patrolled a long stretch of the trail. Tensions were light with the Indian tribes at first through the first three years after the Treat of 1851. However, the 1854 Grattan Fight of Fort Laramie's soldiers and people killed, igniting conflict that continued for twenty years. The final troops left Fort Laramie, Wyoming in 1890.

Independence Rock State Historic Site - Standing 6,028 feet above sea level, the famous rock o the Oregon Trail is 136 feet high with a circumference of over one mile. Deemed the "register of the desert", it holds hundreds of pioneer and explorer names who passed this way. It is located sixty miles southwest of Casper, Wyoming close to the Sweetwater River.

Photo above: Reenactment of a Wagon Train.

Whitman Mission National Historic Site - Established in 1836 near Walla Walla, Washington prior to the wagon train era by missionaries Narcissa Whitman and Eliza Spalding. These women established a mission that became an important stop along the Oregon Trail. Increasing tensions wih the local Indian tribes would eventually lead, however, to their deaths.

The Oregon Trail spans the entire western half of the nation and there is varying lodging opportunities around each historic site, both major, including the national historic sites, and minor sites along the way. Check out your favorite online travel site or the local tourist bureaus for lodging choices. 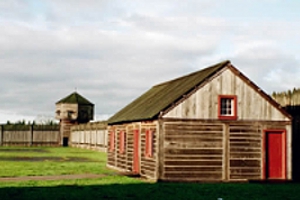