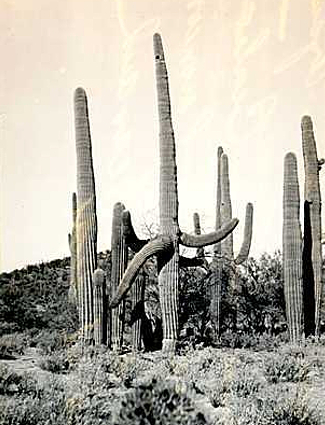 It's on the battleground of a different type of history today, with its border with Mexico presenting both the narrative and some challenges. And yes, it has impacted visitation from its highs in the 400,000 visitors per year to today's mid 200,000, although to be fair that could always be the National Park Service propensity for some counting changes. In either case, while we acknowledge the challenges of the park's location, it doesn't take away from this one plain fact. Organ Pipe Cactus National Monument is a hot and historic place to visit, and if you're in southern Arizona for some reason and want to see what hot history and hot nature looks like, there's not a whole lot better example than this. 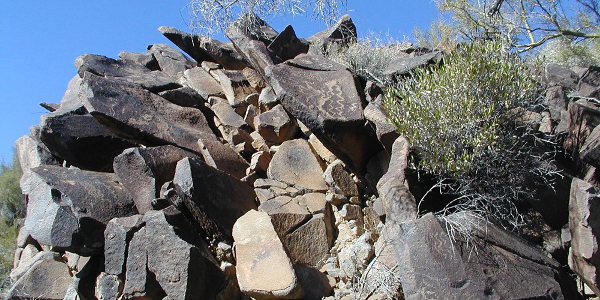 This is an area replete with history, the most remarkable that of the Tohono O'odham (the Desert People) and Hia Ced O'odham of the Sonoran Desert. When Coronado arrived in 1540, expedition member Melichior Diaz was thought to be the first European to cross the region where the monument sits today. It would be Mexican territory, even after the Mexican American War, not ceded to the United States until the Gadsden Purchase in 1853. Mining had already begun prior to that, in the early 1850's with three mining districts established within that decade. The Victoria Mine Claim would be worked until the 1970's, well within the timeline of the park itself.

Ranching in the Park - There's thought that ranching in the area began back in Coronado's time, although the ranch sites, or their remains, that can be visited today represent the newer version, dating back to the early 1900's. Desert ranching was tough, with one square mile needed for every head of cattle. Within the monument land, there was one predominant family, the Grays, who ranched the acreage from 1919 forward. They lived in the Dos Lomitas Ranch House, but owned ranches throughout the monument land, many through acquisition. Line camps were established throughout, including Guchado, Alamo, and Poso Nuevo. The land was grazed through 1972, well past the 1937 date of the establishment of the park. 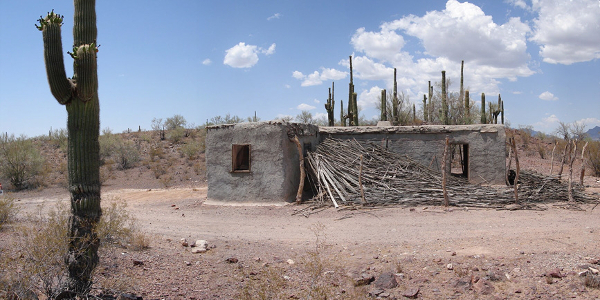 In 1937, the National Park Service began its tenure as stewards of the Sonoran Desert landscape that calls Organ Pipe Cactus National Monument its home. Today you can see exhibits of that life and nature at the Kris Eggle Visitor Center, take a ranger guided tour, ply the backroads on a driving excursion, or hike, if you are able, the desert trails of the park. It's best to visit in the fall, winter, and spring, due to the stifling temperatures that summer can bring. The ranger oriented tours are winter oriented, January to March.

During other times of the year, there might be ranger programs as well as community events in the historic plaza of Ajo. Check the local calendar for any events during your time of stay.

We'd be remiss not to mention that the National Monument is the site of the border wall. Be aware of what that means, both for potential construction as well as border crossings. Also be aware, at all times, of the heat, and take the necessary precautions to have a safe trip. 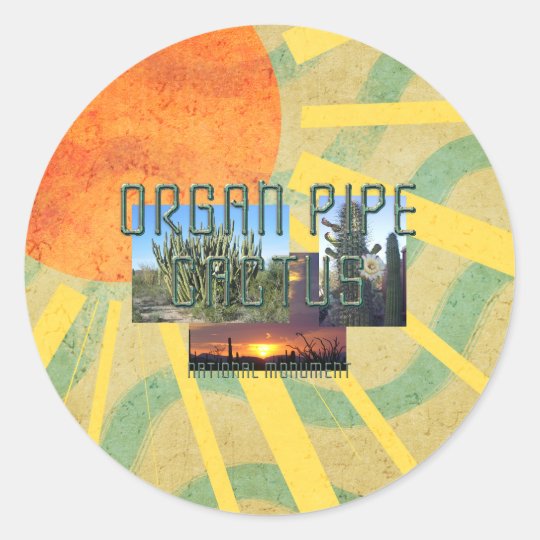 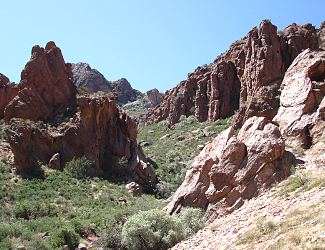 1. If you're visiting in the winter, take one of the great ranger tours. The Ajo Mountain Van Tour is a three hour drive with a ranger. Only ten people per day and advance reservations are likely required. Another favorite are the evening programs at the Twin Peaks Campground amphitheater.

2. Stop by the Kris Eggle Visitor Center and take in the fifteen minute film about the park. It will get you oriented to the Sonoran Desert landscape and what's in store once you explore outside.

3. Take a drive. If you're not able to attend the Van Tour, you can explore the Ajo Mountain Drive on your own. It's twenty-one miles long. There's others as well; Puerto Blanco, Bates Well, Pozo Neuvo, and Camino de Los Republicas. Some are fine for regular vehicles, but others cross washes and require four wheel drive. Ask at the Visitor Center for the best excursion for your car and yourself. 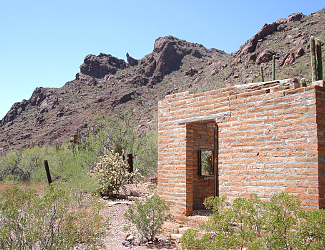 Kris Eggle Visitor Center - Located on Highway 85, eighteen miles inside the north entrance to the park. It is open daily, except Thanksgiving and Christmas. There are exhibits, ranger programs, facilities, book store, film, and nature trail.

Ruins abound within the park. From the ranch houses that dotted its landscape; Bates Well, Gachado, Pozo Nuevo, Alamo Canyon, Dos Lomitas, and Bonita Well. Ask at the Visitor Center which ones are easy (or hard) to find and how you can visit them. There's also the Victoria Mine, for those that want so see whether it seemed wise to stake that claim. 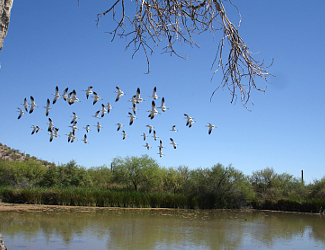 There is no lodging of the motel, hotel, or lodge kind within the park, but there are two developed campgrounds and allowed backcountry camping. Check the local Visitor's Bureau or your favorite travel website for the indoor lodging choices that suit you. Not a whole lot of choice nearby, so it might be good to check early. 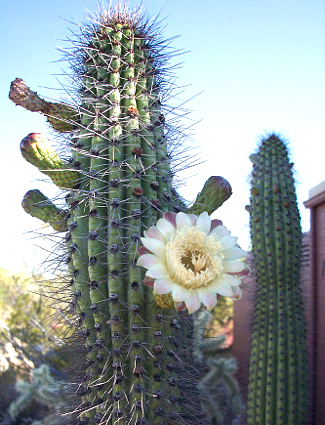 Physical address of Organ Pipe Cactus National Monument is 10 Organ Pipe Drive, Ajo, AZ 85321. The park is right on the Mexican border. The Kris Eggle Visitor Center is just off Highway 85, twenty-two miles south of Why, Arizona. The entrance to the park is four miles from Why. For those traveling from Phoenix, it's about one hundred and twenty-seven miles south, West on I-10, then south on Highway 85. Pretty easy to find. From Tuscon, it's about the same distance, taking Highway 86 West to Why, then south on Highway 85. Check with your GPS or favorite map program for the best route for you.

Photo above: Organ Pipe Cactus with its one bloom, for one night, after polination by bats. Courtesy National Park Service.