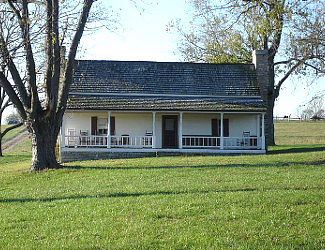 It's such a battlefield preservation success that you're constantly surprised it's not a National Park, but Perryville, the imperative battle for control of Kentucky in 1862 is still a state historic site, with a constant mission to preserve more and more of its battle land, as the campaigns of the Civil War Trust, now the American Battlefields Trust, attests. The park commemorates the October 8, 1862 battle between 71,000 soldiers of the Federal and Confederate armies, which had been battling for supremacy in the border state during the summer of that year. The neutrality of 1861 was gone; both sides now wanted Kentucky. In 1862, the intention of the Confederate Army under General Braxton Bragg was to pull Union forces from Vicksburg and Chattanooga to defend against an invasion into northern territory and control of the Ohio River. 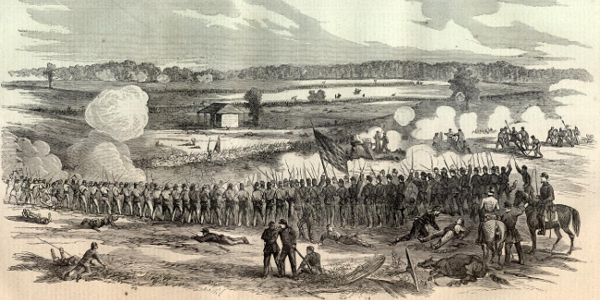 Since the 1840's, the small town of Perryville had been a prosperous merchant's town, with its verdant farmland of the Chaplin Hills to the north of town replete with crops that filled its storehouses. But when Braxton Bragg and his Army of Mississippi, with only sixteen thousand men, met the forces of the Army of the Ohio under General Don Carlos Buell, with forces of fifty-five thousand and twenty-two thousand engaged, those fields became the acreage of an early October battle of which Kentucky had never seen before or since.

By the end of the second day of fighting, the Confederates could claim a tactical victory. Union General Buell, behind the lines, did not realize that a major battle was occurring and did not send in his remaining reserves. With the Confederate disadvantage in troops, their victory was initially impressive, but it had come at such high cost by percentage of men and material, that they would retreat back to Tennessee anyway by way of the Cumberland Gap, and never make it back to Kentucky territory again. Seven thousand, six hundred and twelve soldiers from both sides were casualties. More Union perished than Confederate. 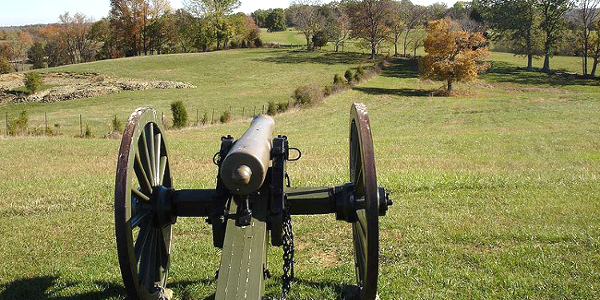 About as pristine as you can get for a battlefield, with additional lands being purchased at regular intervals. You won't have to worry about traffic into a fast food location next to a cannon, at least up to now. When you visit Perryville, particularly the park, but also the town, envisioning the time of the battle and the actions of the brave men who fought there is a rather easy task. The park has a small museum, several monuments, trails and interpretation throughout its over one thousand acres.

There are locations such as the Open Knob, the Bottom House (private, please view from a distance), and the Steeltown site to visit. Steeltown tells a post Civil War story. It was the site of a town where former slaves and veterans of the Civil War created a community.

Battle of Perryville T-Shirts and Souvenirs. 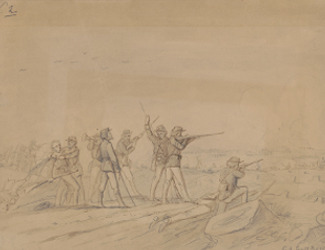 1. Take a hike around the battlefield. Fifteen miles of trails take you past many of the important locations of the battle, forty-six in all per last count on the trails map.

2. Visit the museum, bookstore, and watch the 25 minute film.

3. Take the time to visit downtown Perryville, walk Merchant's Row, gaze at Elmwood Mansion, and take the house tour. It will give you an idea about what regular life was like in the mid-1800's.

4. If you're lucky enough to be in town during the early October anniversary weekend, take advantage and enjoy the lectures and tours.

Photo above: Sketch of the skirmish line after the Battle of Perryville at Salt River of Company A of the 32nd Indiana, October 9, 1862, Adolph Metzner. Courtesy Library of Congress. 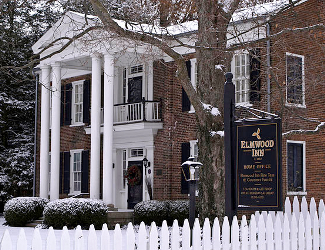 In the Visitor Center, there is a museum with displays, maps and artifacts, a gift shop, and visitor orientation.

Two monuments grace the battlefield. The Confederate Monument dates back to 1902. The Union Monument was added in 1931.

Squire Bottom House - Henry "Squire" Bottom owned the home and much of the battlefield. He owned 760 acres as of 1860, as well as ten slaves. The home has been restored, but is currently privately owned. Please respect their privacy.

Picnic area for your enjoyment.

Elmwood Mansion - Served as a field hospital during and after the battle. The Mansion, built in 1842, has also been an Inn, a Boarding School, and tearoom. Today it is a private residence in the Perryville Historic District.

Perryville Battlefield State Historic Park is located at 1825 Battlefield Rd, Perryville, KY 40468. That's twelve miles from Danville, fifty miles southwest from Lexington, and seventy-five to eighty miles from Louisville to the southeast. Check your favorite GPS program for the best route to the park from your location.

Lodging - A variety of bed and breakfasts, motels, and hotels are located within the Lexington, Louisville, and Danville corridors, but there are few right around the battlefield. Closest is in the Danville, twelve miles, and Harrisonburg area. Check out your favorite online lodging site for the lodging type of your choice.

Camping - Fifty miles away, the Daniel Boone National Forest has many developed and primitive sites for your camping pleasure. Private campgrounds also exist in between the forest and battlefield, with others between the major cities and Perryville.

Perryville, Kentucky is a small place, under eight hundred residents today, even smaller in 1862 when there were three hundred, but has a good amount of history within it. Take the self-guided historic home tour, thirty-five in total, or if you're lucky, a guided tour given certain days of the year. The entire town is on the National Register of Historic Places as of 1973, with much of that reason being Historic Merchants Row, built in the 1840's along Chaplin River. At night, there are also Ghost Tours.

Photo above: Just one of the houses you'll see on the Perryville Walking Tour. Courtesy Downtown Perryville.