Tickets for Plimoth are good for 2 consecutive days. Combo ticket may be used at Mayflower II for any day from one year of purchase. The living history area of Plimoth is typically open from late March thru November.

Size of the Rock - At one time, Plymouth Rock was estimated as weighing 20,000 pounds. Today only 1/3 of the top portion of the rocks remains. When the Pilgrims hit the shore of what is now known as Massachusetts, the Mayflower anchored just off shore, William Bradford, John Carver, and their crew from the Plymouth Colony saw a big rock. That granite boulder, now known as Plymouth Rock due to its location in Plymouth Harbor, was located at the second location of the Pilgrim landing. Photo: Lithograph by Sarony and Major, 1846 of the landing on Plymouth Rock by William Bradford and the pilgrims with the Mayflower in the distance. Courtesy LOC. 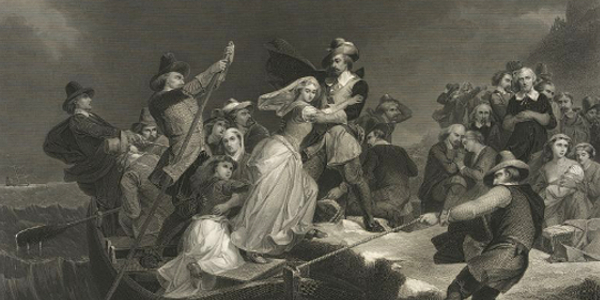 The first landing of the Mayflower was near the tip of Cape Cod and Provincetown. While there's some dispute about the rock and its significance, it represents the settlement of New England and the northern part of the United States, the second permanent colony in America, and along with Plimoth Plantation, tells the story of the second colony and Mayflower itself. A replica of the Mayflower is now located in the harbor at the Plymouth Rock site and can be visited as well. These American history sites are well worth a visit for all those interested in the forefathers of the settlement of America, their new form of government, plus other trials and tribulations.

1620 - The Pilgrims land near Provincetown in November.
1620 - On December 11, a landing party found a suitable site for a settlement and ten days later moved the entire party to Plymouth Harbor. Plymouth Rock was identified as the first solid land the Pilgrims set foot on, even though, that statement is more symbolic than accurate.
1621 - The first Thanksgiving celebration is held in the autumn for three days between the Pilgrims and members of the Wampanoag tribe, who had helped them settle and plant the colony's land.
1741 - Thomas Faunce, the town record keeper, identifies the exact rock that lore and stories from his father had stated was the landing rock.
1774 - Teams of oxen attempt to move the rock, causing a split into two halves. The bottom portion remained at the wharf and the top relocated to the town meeting hall in the town square.
1834 - On July 4th, the top portion was moved to Pilgrim Hall.
1859 - Victorian canopy built over lower portion at wharf and completed eight years later.
1880 - The upper portion was returned to the wharf location, cemented to the lower half, and "1620" carved into the stone. 1920 - Plymouth Rock was relocated and a portico built to house the remaining portion.

Landing of the Pilgrims - Site of the landing on Plymouth Rock by William Bradford and the pilgrims with the Mayflower in the distance in the top right photo shows the representation of the site. The actual site had previously been the location of an Indian village that had been wiped out in 1617 by a plague.

Plymouth Colony - Established in 1620 as the second permanent English settlement in America by the Pilgrims. The colony remained independent until 1691 when it joined the Massachusetts Bay Colony. The pilgrims would become noted for their town meeting form of government, the Mayflower Compact, as well as the Congregational Church. They had come to America due to the persection of their religious beliefs as Puritans. There were 102 passengers onboard the ship Mayflower when they set sail for America. The journey took 65 days.

Image above: Engraving of the Landing of the Pilgrims at Plymouth Rock, 1620, by Joseph Andrews, 1869. Courtesy Library of Congress. Below: Plimoth Plantation, 2002. Courtesy Wikipedia Commons. 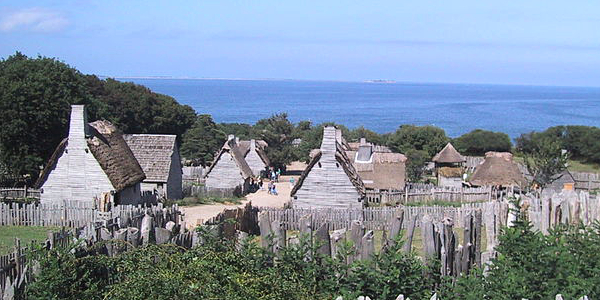 Visiting the Rock and other Pilgrim Sites Today - From late May to Thanksgiving Day, Plymouth Rock is staffed by Pilgrim Memorial State Park employees who tell visitors about its history. The historic site is run by the Massachusetts Department of Conservation and Recreation. In the harbor onsite, sits a replica of the Mayflower. This site, actually part of Plimoth Plantation, can be visited in combination, or separately from the plantation itself. 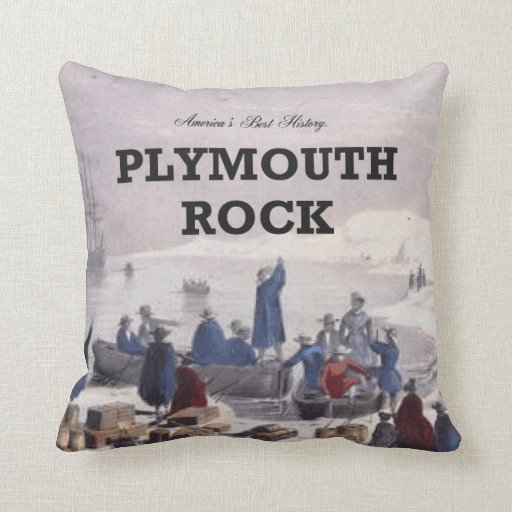 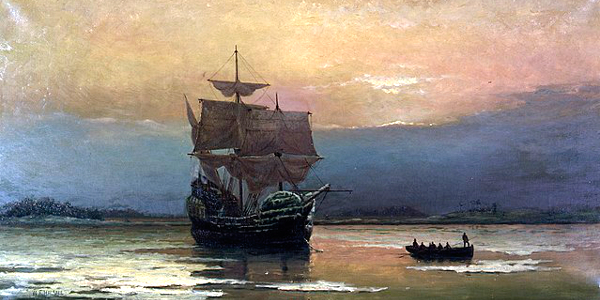 1. Of course you've just got to visit the rock. Located in Pilgrim Memorial State Park, and during the summer months, staffed by guides who can answer your questions about the voyage of the Pilgrims and the rock.

2. Take in Mayflower II. Stand among its galleys and imagine a 65 day journey with 101 other people.

3. For a better understanding of Plymouth Colony and the voyage to the rock, take the time to visit Plimoth Plantation. Yes, it's a bit pricey, but this English Village, open late March to November, is a great way to end your visit to the three main historic sites of Plymouth. 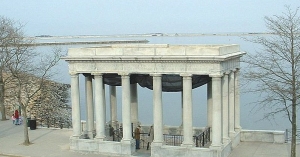 Plymouth Rock - Now only a shadow of its former self, the rock signifies the landing of the Pilgrims on December 21, 1620 and the start of the Plymouth Colony approximately 650 feet from the location of the original rock along the shoreline.

The Plymouth Rock Monument - The granite canopy, pictured above, was built at the location where the rock was moved in 1920. The inscription in the canopy reads, "Erected by the National Society of the Colonial Dames of America to Commeorate the Three Hundredth Anniversary of the Landing of the Pilgrims." The Plymouth Rock Monument is located in Plymouth Harbor and Pilgrim Memorial State Park. 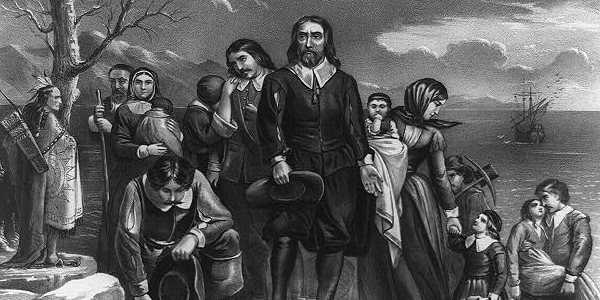 Plimoth Plantation - Located south of Plymouth, the plantation is home to a reconstruction of the original settlement. A replica of Mayflower II is also part of the Plantation exhibits, but now located in the harbor near Plymouth Rock. Plimoth Plantation includes the Henry Hornblower II Visitor Center, the 1627 English Village, the Wamponoag Homesite, a new orientation film, and the Nye Barn. The plantation is open from late March through late November.

Image above: Painting of the first arrival on land by the Pilgrims by Currier and Ives, 1876. Courtesy Library of Congress. 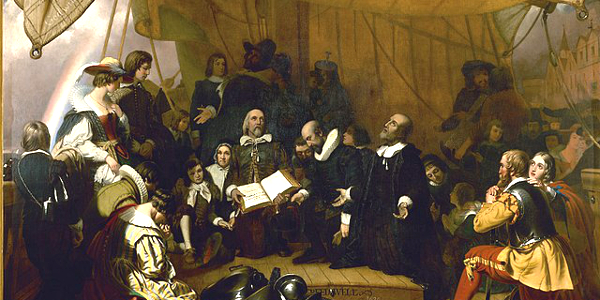 Plymouth is a town that has grown alot since those colony days, but is a medium sized town. Only forty miles from Boston, there are a good variety of places to stay. Check out the lodging choices at your favorite online lodging choice, or contact the local or state visitors bureau.

Photo above: Pilgrims on board the boat Speedwell on journey from Leiden to England, 1844, Robert W. Weir. Courtesy Architect of the Capitol via Wikipedia Commons.

Image above: Lithograph of the Boston Tea Party. Courtesy Library of Congress.