Free. Some state and local land within the riverway do charge.

Weather changes here quickly and summer is noted for fast moving thunderstorms. Winter is upper midwest cold. Keep abreast at all times with the local weather forecast as well as on river conditions during a visit to stay safe and have an enjoyable time. 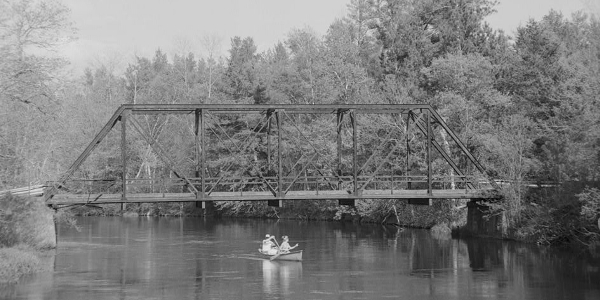 Yes, this river eventually finds its way to the Mississippi, just as its smaller cousin, the Namekagon, which is also a part of the park, does as well. While most who traverse the water and trails of the Saint Croix park will do so for the recreation of craft or feet, just above the bluffs, there is history of the Woodland people, from mounds to heritage that make the Saint Croix and Namekagon waterways not only a highway today for recreation, but one, in the past, that was essential to life and sustenance. Saint Croix NSR has been around awhile though for that river protection and recreation. It is the oldest National Scenic River, established in 1968 by President Johnson. 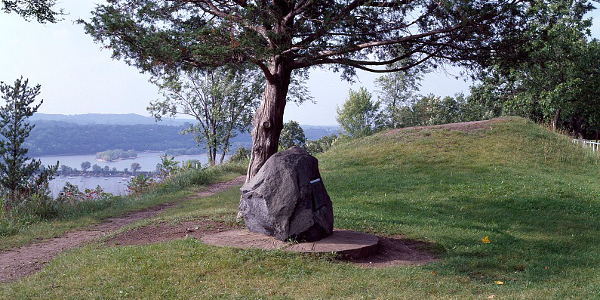 Long before Europeans invaded the north woods of the Saint Croix and Namekagon Rivers in 1831 during the Henry Schoolcraft Expedition, or even before that in the late 1600's when French cartographer Jean-Baptiste-Louis Franquelin, in 1688, created a map which named the area Saint Croix, the Ojibwe, Fox, Dakota, and other Woodland tribes built villages and life all along the waterway. They were semi-nomadic, traveling throughout the area at different times of the year; spring sugar bush camps, fish camps in summer, and wild rice camps in the fall. At sites such as Riverside Landing, Sandstone Cliffs, and Ridge View, archaeologists have found evidence of the heritage and culture. On the bluffs above the Saint Croix River, it is estimated that over fifteen thousand mounds were built by the Woodland tribes.

Once the Europeans invaded the riverway and negotiated a Treaty with the Ojibwe that allowed settlement from 1837 forward, the fur trade, followed by timber, dominated the area. This continued in earnest through 1914. The Ojibwe (Chippewa) controlled nearly all of Michigan, north Wisconsin, and Minnesota, plus westward to the North Dakota Turtle Mountains from the late 18th century forward until European settlement.

Photo above: One of mounds built by the Woodland people on the sandstone cliffs of the Saint Croix River, 1980-2006, Carol M. Highsmith. Courtesy Library of Congress. Below: Saint Croix River near Stevens Creek. Courtesy National Park Service. 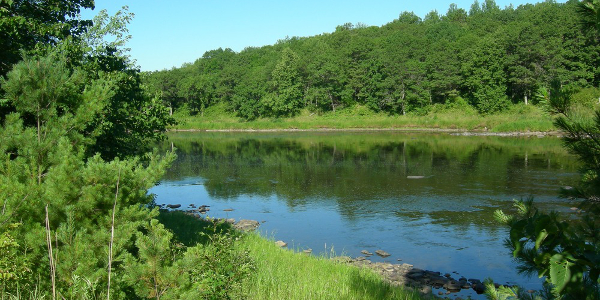 On October 2, 1968, President Lyndon B. Johnson and Congress established the National Wild and Scenic Rivers Act. It protected portions of eight rivers, including the Saint Croix. Today, two hundred and fifty-two miles of the river and its tributaries exist under the National Park Service and other entities to provide recreation and ecology. 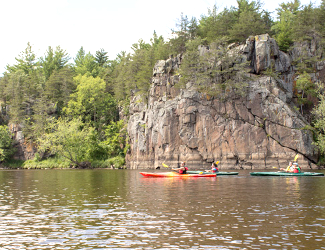 1. There are a variety of Ranger Programs that should not be missed if you get the chance. The Afternoon or Evening Stillwater Tour on a pontoon boat is one of the favorites. It has limited seating, only twelve, and must be booked in advance.

2. Take a hike. So many trails, so little time, and many with a spectacular view of the water. On the Park Service grounds, there are seven trails. More exist in the state and country parks along the two hundred miles of riverside. One of the favorites, the Sandrock Cliff Trails includes sandstone created during the Ice Age from the sea. There's five miles of trails in that area.

3. Head to the water. Seems obvious, we realize, but in a park devoted to a riverway, the opportunity to kayak, canoe, fish, and boat are all over the Saint Croix and Namekagon Rivers. Check at the Visitor Center for the best places to do what you like best and heed all rules and regulations so your visit is safe and fun. 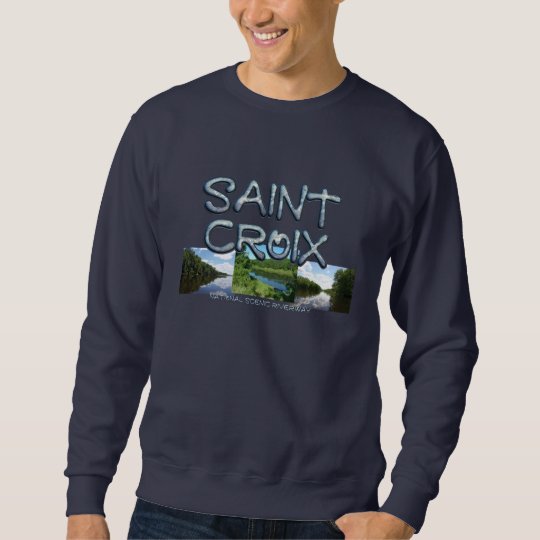 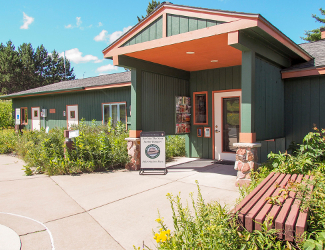 There are two Visitor Centers along the rivers that serve the public with exhibits and information.

The Gibson Cabin - If you want to take a bit of an adventure, not associated with water, ask at the Visitor Center how to find the four National Register cabins still visible within the NSR, including Gibson. 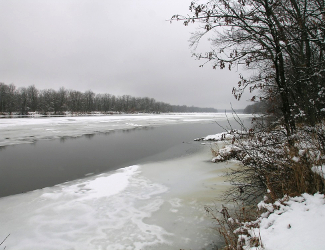 Lodging - There's no lodging per se within the Saint Croix National Scenic Riverways, but plenty within a few miles in the local towns. You can check out the lodging choices at your favorite online lodging choice, or contact the local or state visitors bureau.

Camping - There are three zones for camping within the National Scenice Riverways and more options in the State and Local parks, plus the National Forest to the north. Within the Saint Croix NSR, many of the campsites are along the river, with limited land access. They can make for a very nice river oriented trip, popping from one to the other on a multiple day adventure.

Soo Line High Bridge to Boom Site Landing - Islands only. No drinking water or toilets. Must use onboard or portable toilets and transport waste. Seven night maximum stay. 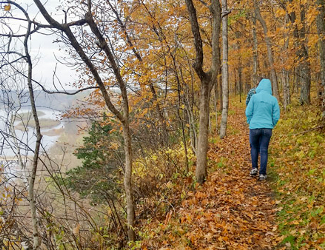 With a waterway over two hundred miles long, much of it the border between Minnesota and Wisconsin, there are plenty of places along the path to visit. The physical address for park headquarters at the St. Croix River Visitor Center is 401 North Hamilton Street, St. Croix Falls, WI 54024. The GPS coordinates are: 45.416284, -92.070422. For one route, the main Visitor Center is just fifty-two miles from Minneapolis, just over an hour drive up I-35W north. You then take Exit 132 onto US 8 East. Once into Wisconsin, turn left onto South Washington Street, then quickly left again onto West Massachusetts Street. It becomes North Hamilton Street; the Visitor Center will be on your left.

Just north of the park sits the National Forest, plus the Namekagon Dam and Lake. There's one and one half million acres of Wisconsin north woods here, with lots of camping options plus other outdoor activities. There are cabins at Lost Lake plus developed campgrounds and dispersed camping. In the Eagle River Ranger District, there's also a Historic Driving Tour including information signs along the way that point out the natural and historic features of the area, plus a Three Lakes Historical Society Museum.

Photo above: Hiking above the banks of the Saint Croix River. Courtesy National Park Service/Eret. 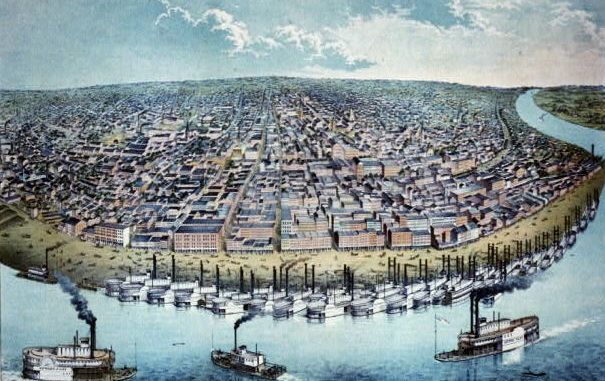