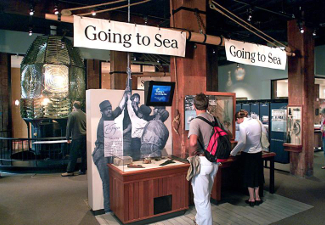 While we should be amazed at all the maritime history exhibited here, and we are, we are also amazed at the amount of tourists attracted to such a small area. Over four million people visit the wharf and ships of this fifty acre site just a stone's throw from Fisherman's Wharf. They ply the planks of the sails that brought miners to gold fields and passengers on ferries through the history of the town as it grew from outpost to boom to cosmopolitan metropolis. The site has only been National Park associated for just over twenty-five years, authorized in 1988 officially and growing from the Maritime Museum that's been there since 1951. With the tours, festivals, and festivities that abound from the Visitor Center to Hyde Pier to the Maritime Museum to Fort Mason (not part of this park, but part of another, Golden Gate), you'll spend a whole lot of smile time at this park dedicated to the sea. By the end of your day, there might even be a sea chantey rolling around your head, too. Even if you don't want it to. 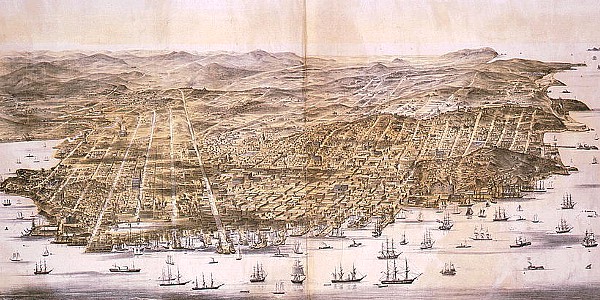 Hyde Street Pier - Until the Golden Gate and San Francisco-Oakland Bridges were built in the mid-1930s, Hyde Street Pier was the principal ferry pier taking autos from San Francisco to Sausalito and Berkeley. It was actually part of Highway 101 and 40 and operated by a subsidiary of the Southern Pacific Railroad.

Balclutha - Built in 1886 in Glasgow, Scotland, the steel-hulled ship carried wine, case oil, and coal from Europe to the United States until transferred to Hawaii in 1899, where it began to haul lumber between the Pacific Northwest and Australia. In the early 1900's, it became the Star of Alaska, hauling salmon for the fishing industry. In 1933, the name changed again to the Pacific Queen and became an exhibition ship, even appearing in the movie Mutiny on the Bounty.

C.A. Thayer - Built in 1895 in Eureka, California, the schooner carried lumber from Washington to California and other ports until 1912. She had a capacity of 575,000 board feet. For the next twelve years, the ship was used in the salmon industry, then in the cod industry until 1950.

Eureka - Built in 1890 with the original name Ukiah by the San Francisco and North Pacific Railroad Company, it originally carried commuters (passengers 2,300 max) then cars (120 max) to Tiburon during the day and railroad freight cars by night. During World War I, it carried munition rail cars and was eventually renamed Eureka; World War II saw troop movement. The Eureka discontinued service in 1957.

Photo above: Birds-eye view of 1864 San Francisco in a lithograph by Robinson and Snow. Source: Library of Congress. Below: A western gull people watching at Hyde Pier. Source: National Park Service. 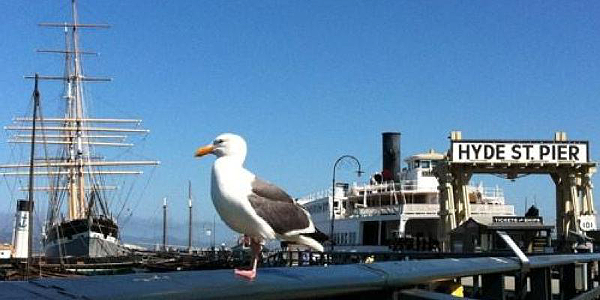 Stepping off the cable car at the Powell and Hyde turnaround, the San Francisco Bay appears calm. Well, it is, compared to days of the past, even though, as you step into the park, you begin to see the remnants of the busy port and ships that dot the horizon with their masts tipping into the sky toward Oakland or the Golden Gate Bridge. To your right, the Visitor Center inside the Argonaut Hotel, itself a restored cannery warehouse, waits to give you orientation for your day. Ahead of you bob the boats; the Balclutha from 1886, the C.A. Thayer 1895, the Alma 1891, and more. Head left and the Maritime Museum awaits past beaches to walk and play on, extending to the Municipal Pier where fishermen still test their luck at the catch of the day.

Balclutha - Acquired in 1954 by the San Francisco Maritime Museum, she's been moored at Hyde Street Pier since 1988.

C.A. Thayer - Purchased by the State of California in 1957, it began exhibiting at the San Francisco Maritime Museum in 1963. It became a Park Service ship in 1978.

Eureka - Joined the ships at San Francisco Maritime in 1958. Served as the main location for filming the television series Nash Bridges from 1996 to 2001. 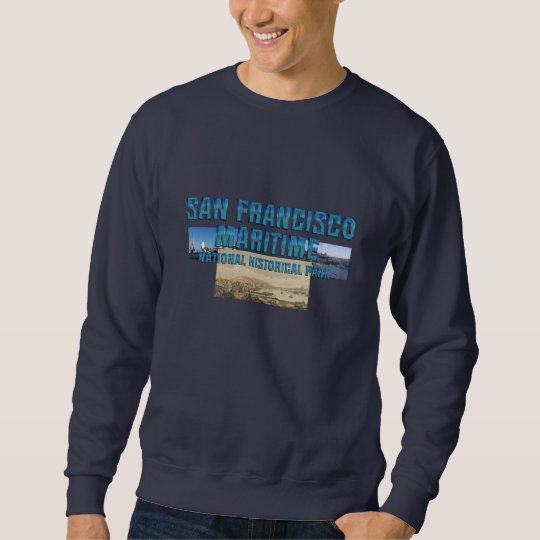 San Francisco Maritime T-Shirts and Souvenirs from the official merchandise of America's Best History. Great for fans of San Francisco and the sea. 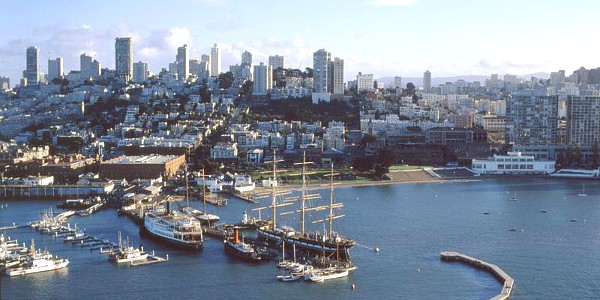 1. Sit back and sing. Once per month, you get to sing sea work chanteys on the Eureka at night. Reservations required so plan ahead. Bring your best voice and sometimes a hot beverage.

2. Take in a ranger guided tour of the ships. There's usually daily tours of the Balclutha while docked, and twice per week tours of the Alma while sailing (additional fees required). To hear the stories of the ships, sea, and times while aboard these vessels, whether in port or out, is great. Try to refrain from wanting to stow away when the tour is done.

3. Head down the waterfront from the park through cannery row to Fisherman's Wharf in a weekend tour. Ranger guided. Starts at the Argonaut Hotel.

4. Even though you're bound to want to spend as much time as possible on the ships themselves, please take advantage of the exhibits in the Visitor Center and Maritime Museum. Yes, best for rainy days, but a great start to your tour here no matter the weather.

Photo above: Scene of the Russian Hill neighborhood behind the park along the waterfront. Source: National Park Service. 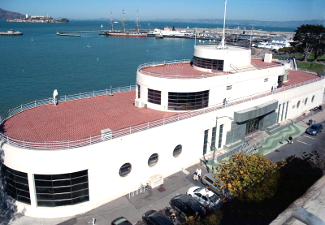 Visitor Center - Located at the corner of Hyde and Jefferson Streets inside the Argonaut Hotel 1908 warehouse building, it has information and high tech exhibits on San Francisco's maritime past.

Maritime Museum - Located on the other side of the park from the Visitor Center, this museum is housed in an Art Deco building from the New Deal and 1939 built to look like an ocean liner. It is also known as the Aquatic Park Bathhouse Buildings and opened as a museum on May 28, 1951 by the San Francisco Maritime Association.

Ships on Hyde Pier - Currently eight historic ships dock within San Francisco Maritime National Historical Park. From the square rigger Balclutha to the schooner C.A. Thayer, from the 1890 steam ferry Eureka to the scow schooner Alma, from the steam tug Hercules to the paddlewheel tug Eppleton Hall, and from the Bay Ark to the schooner Wapama, you can visit these ships and wonder just how you would have fared during one of their San Francisco Bay and beyond journeys. 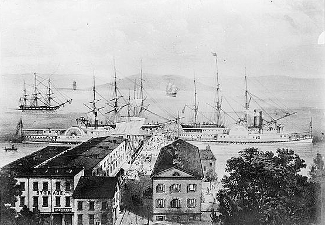 Actually, despite its small size, San Francisco has a historic hotel within its midst. Stay in the Argonaut Hotel, same building as the Visitor Center, once a warehouse and now restored for your stay. It's on the National Historic Register. There is also a youth hostel just outside at Fort Mason, but for most of you, your nights will be in one of San Francisco's many other accommodations, whether hotel, motel, or bed and breakfast that suits your needs. No camping options, although maybe you could stow away on one of those ships, at least for one night. Only kidding.

Image above: Lithograph of Cunnigham's wharf and the bay in 1856 from Sarony and Major. Source: Historical American Buildings Survey and Library of Congress. Below: The Balclutha during its Star of Alaska days, 1904-1933. Source: National Park Service. 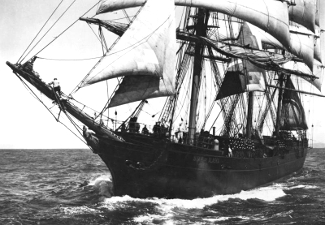 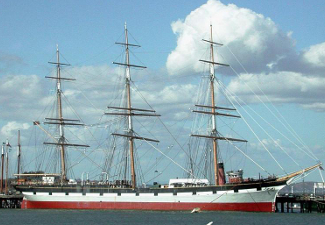 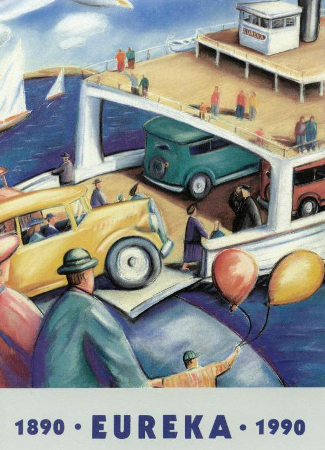