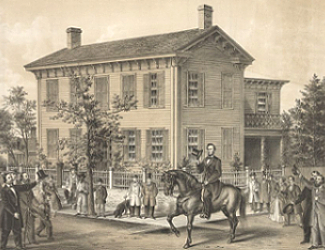 Photo above: Lithgraph of Lincoln returning to his Springfield home to cheers. Photo courtesy of the Library of Congress. Right: Scene of Lincoln and his family in the central lobby of the Lincoln Presidential Museum. 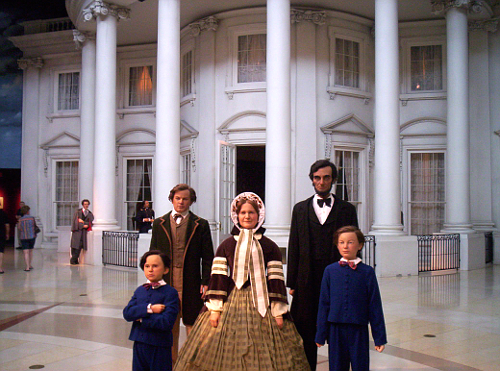 This may not be where Lincoln began, but it surely is where he honed his craft, practiced his trade, built his political legacy, and lived. It's where Lincoln became Lincoln prior to the White House and the presidency. It's where he raised his children, practiced law, and walked the streets. A visit to Springfield, Illinois tells the story of Abraham Lincoln with two main attractions, and a number of smaller ones, too. The main ones are the Abraham Lincoln Presidential Library and Museum (the best attended Presidential Museum in the nation) and Lincoln's Home National Historic Site. It's certainly true that Springfield was a lot sleepier in the 1850's then it is today, although it still was the capital of the state. You'll get a sense of the size and scale of the city over one hundred and fifty years ago when you visit the Lincoln's Home neighborhood or wander down to the Old State Capitol and Lincoln/Herndon Law Offic sites. They are located across from one another with several nice statues of Lincoln and others dotting the square. The city had its origins, like most western cities, in the trapping and trading trades along the river, only becoming settled back in 1818 and known then as Calhoun.

By the time Lincoln came to the city in 1831 and resided there in 1837, it was less than twenty years old. There were only 4,533 residents by 1850, but it did double in size by 1860. And when he arrived back on horseback from his campaign, as depicted in the lithgraph (courtesy of the Library of Congress above) he was greeted by his neighbors and supporters as a hero. However, prior to leaving for the White House after his election victory, southern states were already leaving the Union, and Mr. Lincoln would not return to Springfield in the future.

Photo above: Campaign wagon on the street of Lincoln's Home National Historic Site. Photo below: Statue in front of the Springfield Train Station. 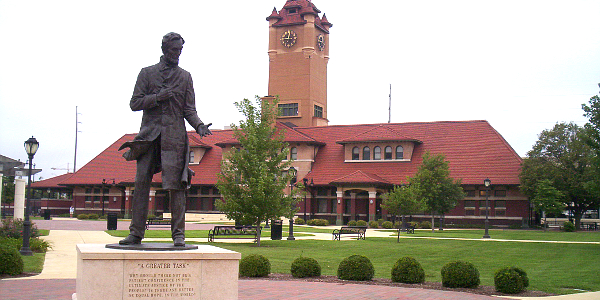 Yes, the city has grown to north of 110,000 residents, but it still contains much of the ethos of the earlier times, a good deal of it dependent on the state capitol as well as the story of Lincoln's stay there that bring tourists to the area. In the Lincoln's Home neighborhood, there are fourteen restored homes, including the Lincoln home above as it appears today, that were once filled with Lincoln's neighbors, supporters, and an adversary or two. And today, there's also the wonderful Lincoln Presidential Library.

They are within walking distance of one another (about five to six blocks) and present a grand introduction into the life that was Lincoln's in Illinois and the legacy that he would leave once leaving it. And these attractions provide a spread in design and style that will keep the attention of both young and old, as Lincoln's Home and its twelve acres take you back into the time with tree-lined streets and the actual home where Abraham and Mary Todd resided while the Museum's attractions will astound you with theatrical precision and bombast that, at least in one of the exhibits, will have you scratching your heads in "how did they do that" fashion.

The Abraham Lincoln Presidential Library and Museum opened in 2005 and includes two immersive theatres with light and sound presentations as well as galleries of exhibits segmented into Lincoln's cabin (Journey 1) and the White House (Journey 2) sections. Each of those sections present exhibits on the various stages of Lincoln's life and wind within the museum for longer than the entrance suggests. You enter into a rotunda area where the four main exhibits and theatres spread out from. There is also a fifth rotating gallery space, the Illinois Gallery, which may, at times deal with the topic of the Civil War or Lincoln or another. To see it all will take at least two and one half hours, and that's if you don't read everything, and there is so much to read.

But don't think that required reading will bore the younger crowd, because it's likely not in the reading that the young and old will come away with, as far as an impression in total. That will stem from the two theatres where Bob Rogers, the Disney imagineer, has weaved a magical story of both the artifacts and the facts. If you're not familiar with Mr. Rogers work, let's just start with this. Every time you see a Holavision apparition in a theme park or go to an Imax theatre, he had something to do with the technology from its inception. And here, in the Lincoln Museum, you get two such experiences (no Imax) and will be amazed. In the first theatre called Holavision, Ghosts in the Library, the presentation will just stun you. We won't give this away, but ask whether the main interpretor of the show is real or not after you see it and try to figure it out along the way.

Six blocks away from this newish attraction is Lincoln's Home during the seventeen years he spent in Springfield. It's housed on a twelve acre site carved from the modern city with houses, including the actual one, from the period in a calm neighborhood while the bustle of a modern state capitol permeates all around. This is a National Park Service site and very well kept. The visitor center has two films about Lincoln's life and home and they give tours of the home every fifteen minutes. You must get a timed ticket for these (tours are limited to 15 people per), but they are free. Get them first thing. On heavy tourist days, they can get snapped up quickly. While you wait for your time, you can watch the movies or wander around the neighborhood. There is a cell phone tour of the neighborhood; ask for a flier on how to access it Some of the homes also have exhibits you can visit and they don't require a ticket or tour. 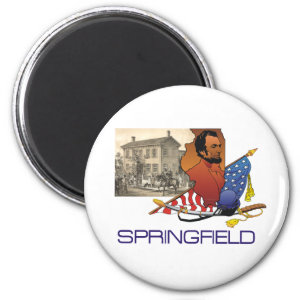 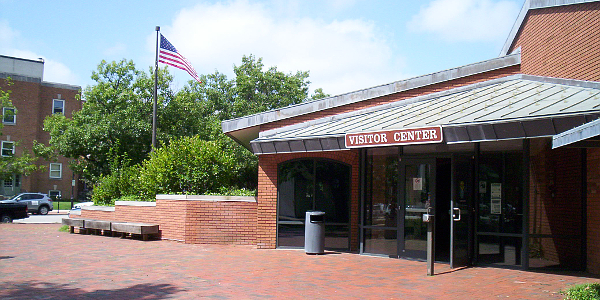 1. It's obvious. Don't miss the two theatres in the Lincoln Museum complex. We've touched on the Holavision Theatre above, but the Union Theatre with its presentation of Lincoln's Eyes is a sound and site extravaganza as well. Okay, some think this is all too Disney for them in a history sense. We think they're wrong.

2. Okay, if you're one who think it's too Disney, then just take a walk. Because once you get in Mr. Lincoln's neighborhood of the National Historic Site, you get that sense of time period back. Don't be put off by the time on your ticket, if it's a bit in the future. The films in the Lincoln's Home visitor center are well worth the time. They're more traditional, but very illuminating about what was transpiring in Lincoln's Springfield years.

3. There's other sites around the city of Springfield you might want to check out as well, many on the walk from the museum to the National Historic Site. Lincoln's office, the train station, and Illinois State building, are just a few you should check out. 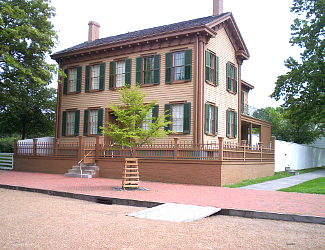 The Abraham Lincoln Library and Museum. BTW, the Library is free if you want to wander around there or have some research to do.

Lincoln's Home National Historic Site - Twelve acres of period buildings, a Visitor Center with films, a book store, and a place out of the sun, plus the Lincoln Home tour.

The Illinois State Museum - Enjoy the history of Illinois back to prehistoric times with fossils, the largest bear to ever live, American Indian heritage, and it's all free. 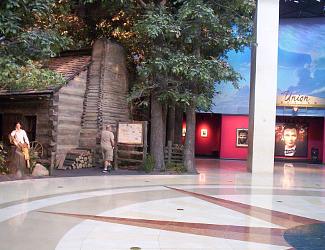 Other Things to Visit in Springfield

There are a number of historic sites just within the blocks between the two above, including Union Station and Union Square, the Springfield Illinois African American History Museum, the Lincoln/Herndon Law Practice Office where Lincoln worked, and the Old State Capitol. A little further from those two are the Executive Mansion, the current State Capitol, the Illinois State Museum, and Lincoln's Tomb (not within walking distance).

Photo above: Interior view of the exhibits at the Lincoln Presidential Museum.

Springfield is surrounded by a variety of choices for lodging; some are located near the central attractions, but many reside along the Interstates 72 and 55 that come into the city or along Route 4 on the western side. Check your favorite online site for the best location for you and your family. As far as places to eat, there are a good number of them within the blocks between the Museum and Lincoln's Home National Historic Site.