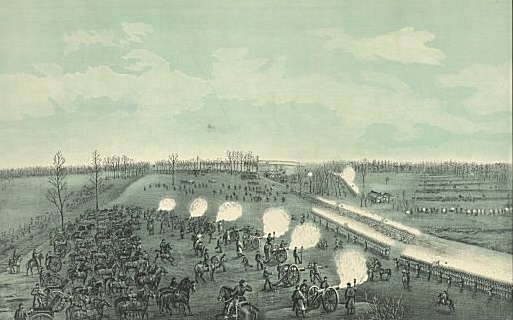 Image above: Print from 1900 showing Union Artillery firing at Confederate troops on December 31, 1862. Right: Print showing the first brigade of Colonel Walker on January 2, 1863. On this day, the Confederates were driven back with heavy loss. Both images courtesy Library of Congress. 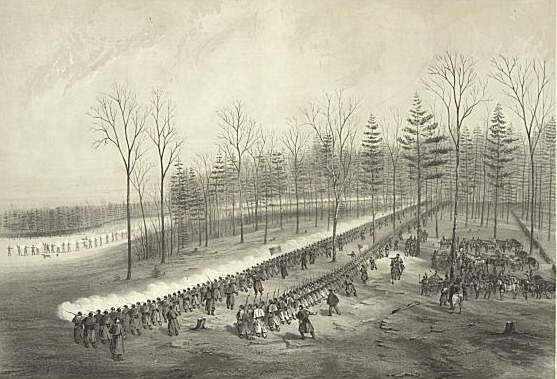 In the shadow of Nashville sits a small national battlefield of the Civil War, now within the suburbs of a sprawling American city, one that get less attention than some of those larger War of Rebellion parks such as Gettysburg or Vicksburg or Shiloh, but one no less important to the bounty that is awarded to Americans today, to the freedom of a nation that would have been torn asunder if not for the brave soldiers who fought in the Battle of Stones River in Murfreesboro, Tennessee. While the forces of the Army of the Potomac in the Virginia theatre were battling their way through the mud after the Fredericksburg battle, the three days of strife surrounding the Tennessee town from December 31, 1862 to January 2, 1863 were being waged among the Union forces of William S. Rosecrans, in command due to Lincoln's replacement of Buell, but with great assistance from General Philip H. Sheridan, and the Confederate troops of Bragg. It would start out a great Confederate victory, but deteriorate into a Confederate retreat.

The Union Army had been in Nashville as the end of the second year of war approached when Rosecrans determined to move his troops south to take the battle to Bragg. Abraham Lincoln was desperate for a victory after the earlier December defeat of General Burnside at Fredericksburg. He wanted to usher in the Emancipation Proclamation in the same light as his announcement, which came after the Union victory at Antietam in September. It was due to begin on January 1st. The Confederate Army initiated the attack on day one, engaging the enemy in a breakfast raid and gaining great advantage during the first hours of the fight, but the Union would eventually retreat and hold by the end of Day One. When fighting began again two days later, the Confederate attack, again with initial victory, was repulsed with great casualties, and caused a retreat from the field the next day.

Of the eighty-one thousand men who fought at Stones River, nearly twenty-four thousand were killed, wounded, or missing at the end of the three days. In the ensueing days, Rosecrans would overtake Murfreesboro and much of the middle part of Tennessee, and build the formidable Fortress Rosecrans southeast of the main battlefield. It would serve the Union Army as its base until the surrender by General Lee at Appomattox Courthouse in April 1865.

Stones River National Battlefield - Now within a sprawling suburb of Nashville, the park today is small by battlefield park standards today (the battle covered 4,000 acres at the time), even though its fighting was certainly as important and tragic as many of the larger sites. Confederate casualties numbered 10,268, and Union casualties, despite eventual victory, were even greater at 13,249. Its importance after the battle; it prevented Confederate control of the middle part of Tennessee, thus depriving them of food and supplies. And Lincoln was particularly glad for this victory at the same moment as the implementation of the Emancipation Proclamation, which began on January 1, 1863. 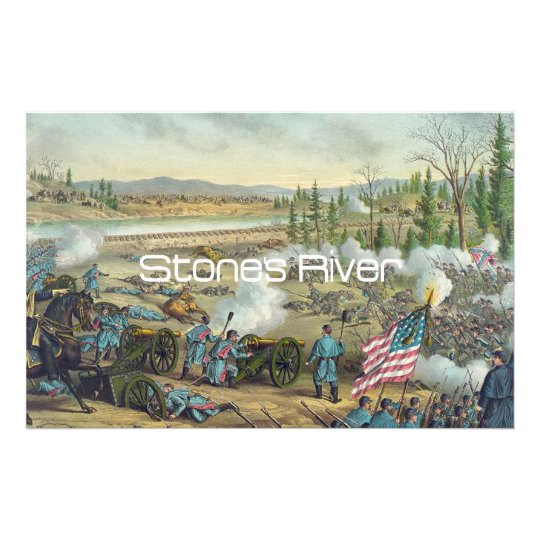 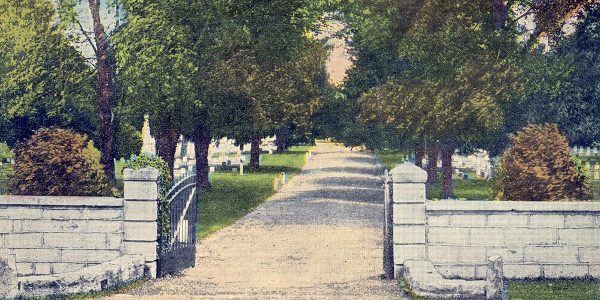 1. During much of the spring to fall season, from May to October, Stones River has a variety of ranger guided caravan tours. These encompass you following the ranger in your car on a guided tour of the various spots in the park.

2. Visit Fortress Rosecrans. Although not there during the battle, this fort was constructed after the battle and used by Union forces through the end of the conflict as its main supply base south of Louisville. The fort encompassed 200 acres and took six months to build.

Photo above: Period postcard of the Stones River National Cemetery in Murfreesboro, Tennessee. Courtesy National Park Service. Below: Sketch by Middeton of the Battle of Stones River. Courtesy Library of Congress. 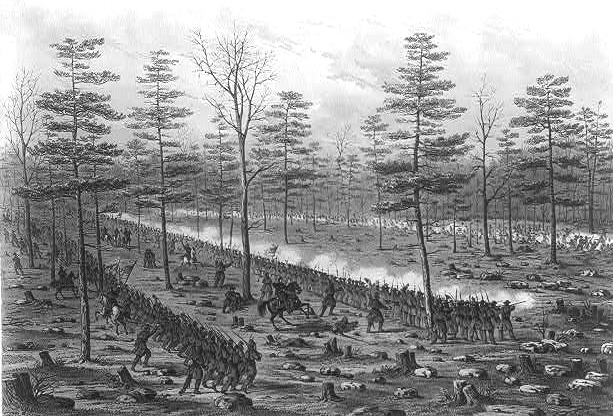 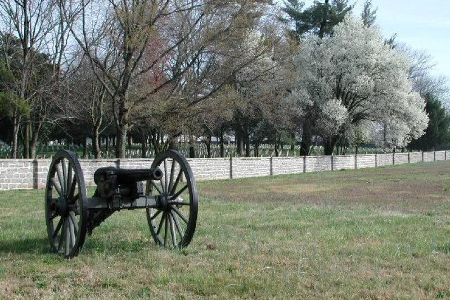 Stones River Visitor Center - Including exhibits, a film, and access to nearby Stones River National Cemetery, the Chicago Board of Trade Battery, and the Pioneer Earthworks.

Hazen Brigade Monument - Located near the spot where Hazen's men held off four attacks from Confederate forces on the first day of battle. They were the only Federal forces to hold their position during the first day's fighting. This area of the field is known as Hell's Half Acre.

Fortress Rosecrans - The earthworks may be smaller than they had been during the Civil War, but this fort three miles down Nashville Pike from the visitor center gives the visitor a good indication of the size of the supply base that helped the Union control Middle Tennessee from 1863 to 1865. 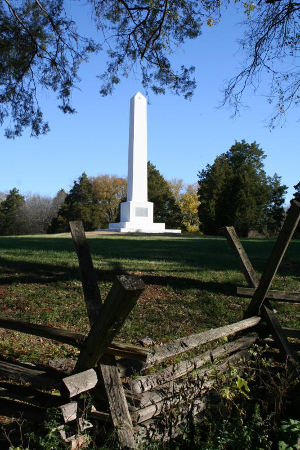 Murfreesboro, Tennessee is a significant sized suburg of Nashville these days with over 45,000 people living there. There were only 3,861 residents in the town when the Civil War knocked at its door in 1862.

While there is no lodging or camping within the park, it is available surrounding the park. Check out your favorite online travel site or the Rutherford County Chamber site, which lists some options, too.

December 30, 1862 - By this date, the armies of the North and South were located west and south of Murfreesboro, Tennessee.

December 31, 1862 - The fight begins when the Confederates attacked the right flank of the Federal line. This breakfast attack successfully defeated the Army of the Cumberland during this first phase. The Confederates began to attack the center of the Union line where General Sheridan formed his lines of battle. Sheridan fell back, but slowed the Rebel advance. General Rosecrans defended the Nashville Pike with reserves and cannon fire, and retained control of the road when fighting for the day ended. The mid-morning fight at the Cowan house saw the Union command under General Hazen hold. The Hazen Monument marks this spot. Afternoon fighting in the same area, as well as on Nashville Pike, saw the Union hold as well.

January 1, 1863 - Predominantly spent by both Union and Confederate commanders in preparation for the next day's battle.

January 2, 1863 - In the afternoon, General Bragg ordered an attack against a hill near McFadden's Ford, which was achieved, however, cannon fire from Union guns on the west side of the river wreaked havoc on the lines as they approached the ford, causing 1,800 casualties.

January 3, 1863 - General Bragg and the Army of the Tennessee retreat. 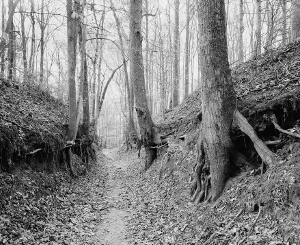