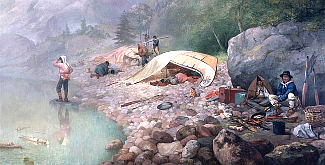 A place of water and wonder, deep in the Minnesota woods and so close to Canada, sometimes you're north of it. Today, Voyageurs National Park represents a place to stare into the sky, either on a clear bright day or at the Aurora Borealis, those northern lights, at night. It's a place to camp, and fish, and boat, and canoe through pristine lakes, or when camping, beside them. You can take a canoe trip and think of yourself as a French-Canadian trapper. You can take a ranger guided tour on a boat and see all the sights where the history of Europeans began to meet the Indian heritage for trade. While Vogageurs may not be at the top of everyone's list of parks they must visit, mostly due to its remote location, that's bound to change once you do. Just don't forget your passport if you want to wander over into Canada. 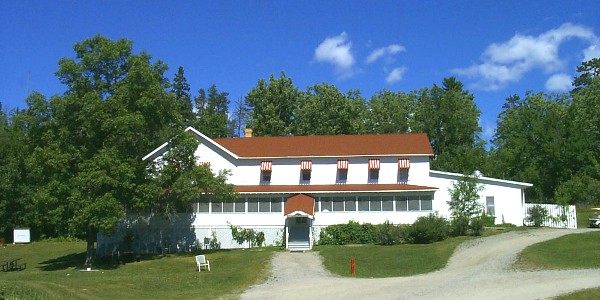 Europeans Come - In 1688, French explorer Jacues de Noyon spent a winter on the Rainy River, followed by other fur traders who treked west to provide furs to the demanding trade in Montreal. They met the Cree, Monsoni, and Assiniboin during those days, but they would leave during the next century, leaving the area for the fur traders and the Ojibwe, who would become their guides, as well as providers of food and pelts. Much of the trade was conducted in birch bark canoes.

Kettle Falls Hotel. The falls have been used by Native Americans to fish for sturgeon and the hotel a staple of the area since 1910, built with the money of madam Nellie Bly for lumber baron Ed Rose. Today, the hotel is open from May 1 to November 1. It's fifteen miles from the nearest road, so, once again, you'll be boating in, or flying in.

Rainy Lake Gold Rush - It was July 1893 and a local prospector was camping near the Black Bay Narrows, finding gold in quartz, what would become known as the "Little American" discovery. By March of the next year, Rainy Lake City had been born, with several hundred residents plying the gold trade and ancillery services. But it wouldn't last. Tapped out by 1898 and the town a ghost town only three years later. 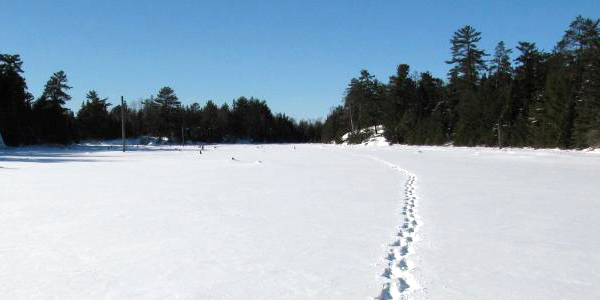 Over the years, the area of what is now Voyageurs National Park had been an oasis of outdoors recreation, with many private cabins and resorts dotting the landscape. In 1975, the park was born, and over time, will retain about fifty of the structures built as historic buildings, while removing others depending on the agreements made with the owners. While the visitors see much of the value of Voyageurs in the recreation, the park focuses its history with boat tours, canoe trips, and hikes that tell visitors of the stories of those French-Canadian trappers, American miners, the Ojibwe, and more.

The three visitor centers are the place to start your journey here, and a phone call prior, if you want to camp, is necessary, due to the Print before You Come Permit rules.

It's a land switching between seasons, from water to white, with a variety of landscapes and history. It straddles the border between the United States and Canada. There are Indian camps to visit and stories to be told of tough trappers who withstood the elements to make their trade. Today, you can wander through the woods on a hike (fifty miles of trails), canoe or boat by yourself on on a ranger tour. There are four major lakes; Rainy Lake, Kabetogama Lake, Namakan Lake, and Sand Point Lake. Camping here is a treat, although it takes a bit to get used to the procedure. And to look up into the night sky on a day when the Northern Lights are arcing into the atmosphere, well, it's just pretty special. Plus there's a historic hotel built by ladies of the night money, ... but you'll have to boat or fly there, too. And if your desire is to engage in winter white activities, it's a great place to snowmobile, snowshoe, or ice fish. Just remember to dress warm; it's cold here. 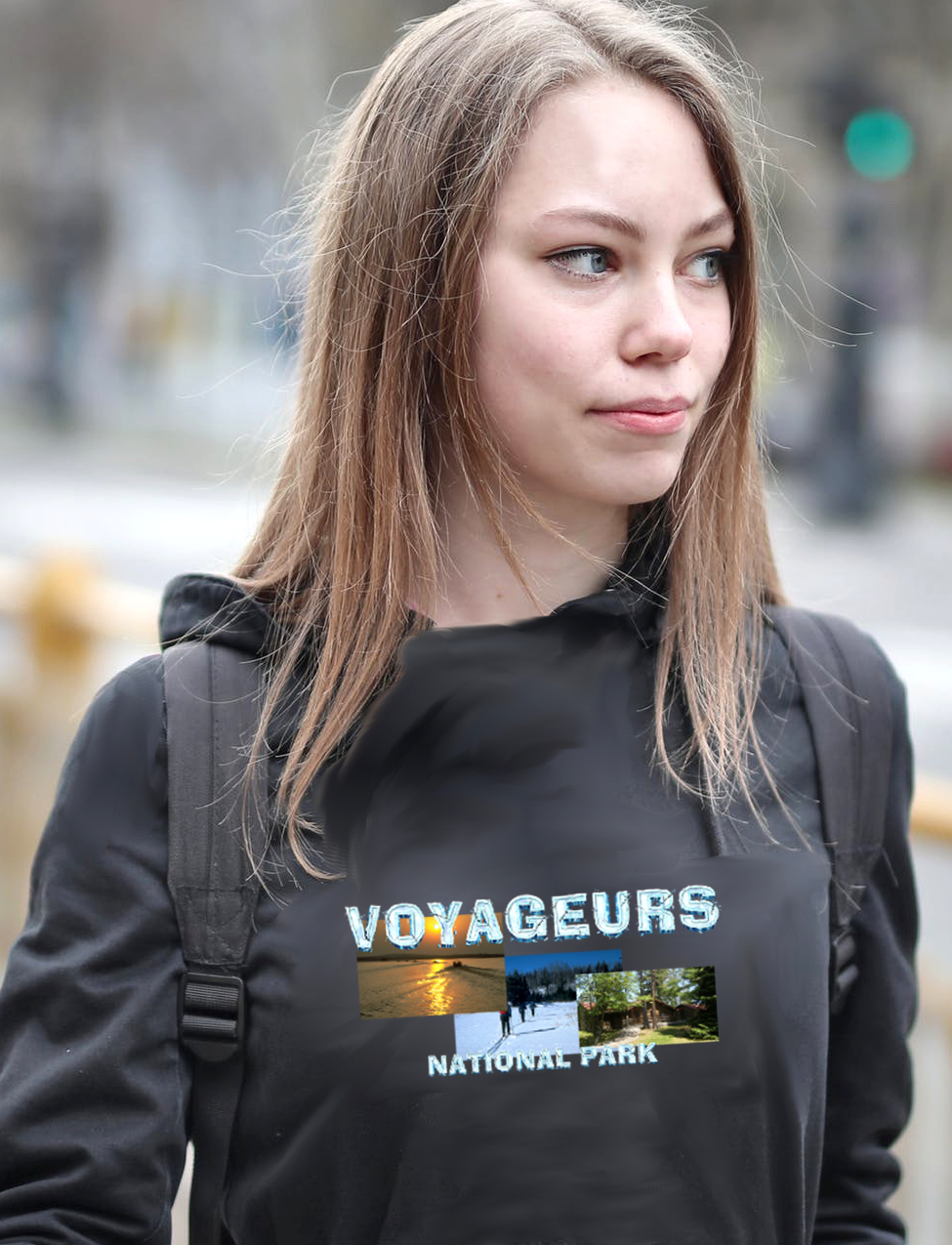 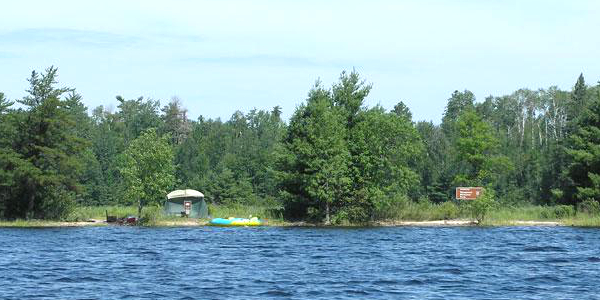 2. If you like to paddle, take a guided canoe trip. Two different trips take place from the Rainy Lake Visitor Center, for 1.5 to 2 hours, five days per week. Kabetogama Visitor Center has canoe trips twice per week. Canoe trips are free, but reservations suggested and sometimes required.

3. Look up into the night skies. This is one of the clearest places on earth, without the lights of progress, to view the skies. And if you're lucky, one of those nights, you'll see the Aurora Borealis in full splendor. 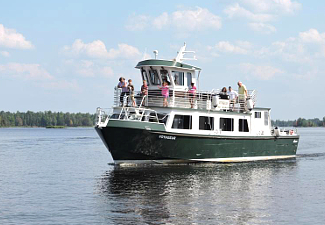 Ash River Visitor Center - Central area of park. Located in the historic Meadwood Lodge, there is a bookstore, exhibits, theatre, rangers on duty, plus a free boat launch and picnic area outside. Open late May to late September.

Photo above: One of the tour boats used to take visitors to historic sites and view wildlife at Voyageurs National Park. Source: National Park Service. 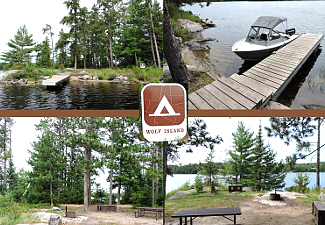 Although we've focused a bunch on the fact that there's water here, there are also tons of trails to hike. Remember to only hike to your capabilities.

Some of the trails suggested by the park of various difficulty levels ... 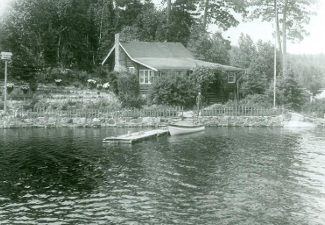 There's one lodge, the Kettle Falls Inn, which has been hosting guests since 1910. It's a unique experience, only accessible by water or air, and not as pricey as you'd think. For other lodging in the area, check your favorite online lodging sites for the lodging type of your choice.

It's a bit odd, but there are no drive-in campsites within Voyageurs National Park. Several exist just outside the boundary in state of Minnesota campgrounds and private campgrounds. Inside the park, you've got to boat-in to one of two hundred and seventy campsites. Start to paddle now. But, and this is rather important, you must reserve prior to going to get one. Start to reserve now before the paddle. You can reserve watercraft, too, and there are houseboat sites. However, you can not reserve a site or watercraft for that site on the day you arrive. There are some backcountry hike-in campsite on Kabetogama Peninsula. Better call first, there does seem to be a lot of camping rules here. Hopefully some will change.