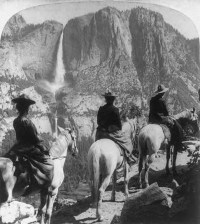 Photo above: Visitors on horseback on the Glacier Point Trail, looking toward Yosemite Falls. Circa 1901. Photo courtesy, Library of Congress. Hiking. Camping. Waterfalls. The wonder of nature. Nestled southeast of San Francisco, southwest of Lake Tahoe, and to some, in the middle of nowhere, the awesome wonders of Yosemite National Park wait for your visit with waterfalls that cascade into forests, with hiking, camping, and many other activities for all in your family to enjoy, plus some of the most popular national park hotels, lodges, tent cabins, and other camping choices in the nation. 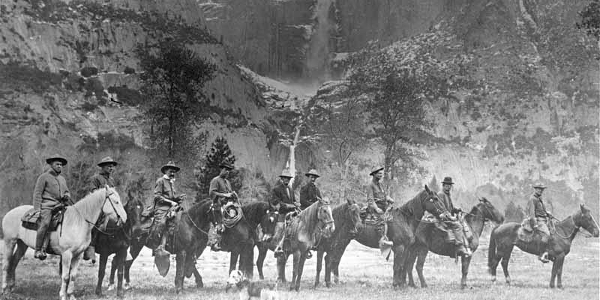 The beauty of the Yosemite Valley, its falls, meadows, and other natural wonders has been a source of inspiration for generations, first, of course, to the native American tribes that inhabited the area, including the Southern Miwok and the Mono Piautes. To learn more about the Indian heritage, visit the Indian Village of Ahwahnee in the Yosemite Valley area. Once non-Indian people viewed the spectacular vistas of the area, it was not long before miners, entrepreneurs, and tourists would begin their love affair with Yosemite. From Yosemite Falls to El Capitan, the natural wonders of the California national park inspire all who cross into its borders. 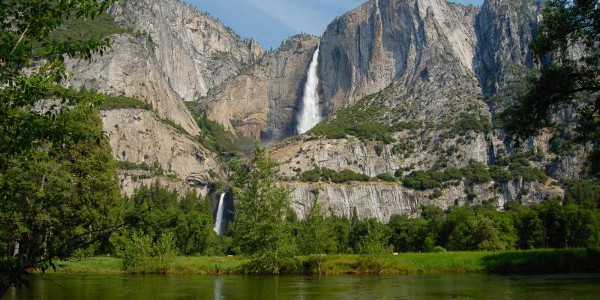 Yosemite is one of the USA's most popular national parks. So popular, in fact, that the National Park Service keeps wondering how they're going to protect it from its popularity, which now includes an elaborate shuttle system to various sections of the park and reservations for lodging, not entrance, that should be done months in advance.

Yosemite is a wilderness park known for its waterfalls, but it has so much more. El Capitan and the Merced River in the Yosemite Valley has been thrilling visitors even prior to the photo from 1899 below. Although Yellowstone National Park was the nation's first in 1872, it was the granting of Yosemite to the state of California as a public trust by Abraham Lincoln eight years earlier that began the federal park idea. Yosemite National Park was created, officially, into the national park system in 1890. It now contains over 750,000 acres of wilderness for all to enjoy. Visitation grew steadily over the years, coming into the park in various forms. Horse drawn carriages brought visitors into the valley until 1907, replaced by the Yosemite Valley Railroad. Automobiles were officially allowed entrance six years later. One million people visited the park for the first time in 1954, two million in 1976, and double that amount by the 1990s. Public transporation has been encouraged since the 1970's and now includes free shuttle tranporation around a large number of site in the Valley.

There are so many activities to enjoy, from hiking, camping, bird and animal watching, ranger guided walks, shuttle bus rides, evening campfire chats, visitor center films, exhibits, and more. Check out a visit to Yosemite National Park, and enjoy the natural wonders from El Capitan to Bridalveil Falls, from the Tioga Pass to Hetch Hetchy, next time you visit California and enjoy the history of the natural lands of the United States.

Yosemite Today - Yosemite Village along Yosemite Creek is the starting point for many visitors. It includes the Valley Visitor Center, which is the hub for the El Capitan Shuttle, Visitor Orientation, films, and exhibits. Outside the visitor center proper, you will find galleries by Ansel Adams, the Yosemite Museum, the Valley Wilderness Center, as well as places to eat and shop for supplies. The Ahwahnee Hotel, Yosemite Lodge, and Curry Village are located in this area as well. Currey Village contains visitor services, plus several amphitheatres.

Other visitor centers, lodges, shuttles, and ranger walks surround Tuolumne Meadows inside the Tioga Pass east entrance, Wawona and Mariposa Grove in the south, including the Pioneer Yosemite History Center, White Wolf, Glacier Point, and Crane Flat. And let's not forget Hetch Hetchy, where perhaps lesser known falls in more secluded places such as Rancheria, Wapama, and Tueeulala have their own charms. 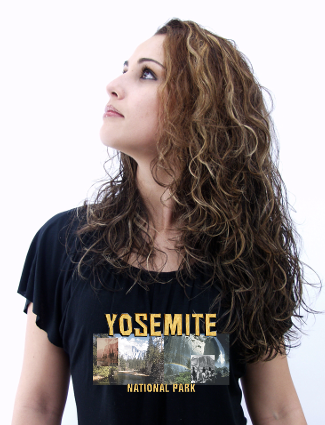 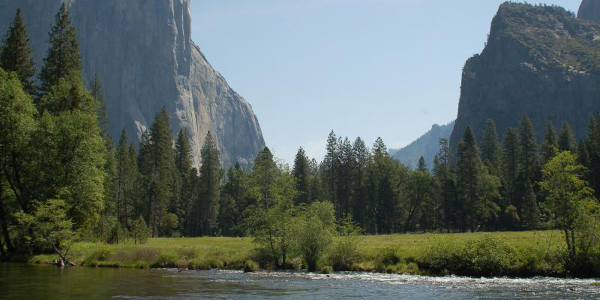 1. The film, the Spirit of Yosemite, running every thirty minutes, at the Valley Visitor Center.

2. Take a check of the Scheduled Events calendar at the visitor center or pick up a copy of Yosemite Today for the day of your visit, pick out a few ranger guided events, and have a real treat. There is nothing like visiting the sites and sounds of Yosemite with a guide who know their stuff. These events are held all over the park, from the Yosemite Valley to Wawona Mariposa Grove, Crane Flat, Yuolumne Meadows, Glacier Point, and White Wolf.

3. Bridalveil Falls. The spectacular drop of the rushing water is an inspiration.

4. Join a park ranger at the Dana Campfire Circle in the Tuolumne Meadows area for a campfire treat of songs, stories, and ranger facts and fun. Many other areas and campgrounds include similar programs.

Photo above: The Merced River in the Yosemite Valley. Courtesy National Park Service. 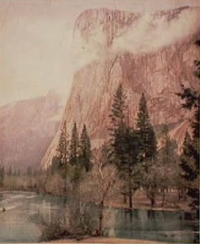 Photos of the Park

Photo above: El Capitan and the Merced River in the Yosemite Valley in 1899. Photo courtesy Library of Congress. Photos below: Yosemite National Park in winter and a warning about not feeding the bears. Photos courtesy National Park Service. 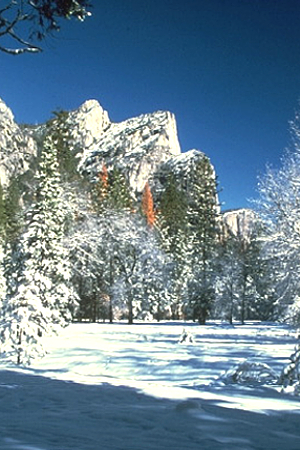 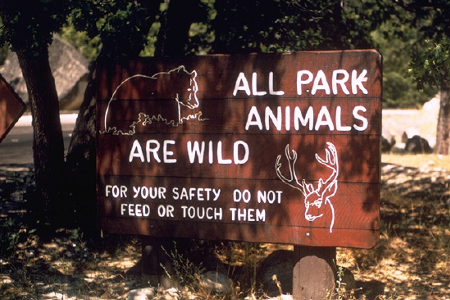 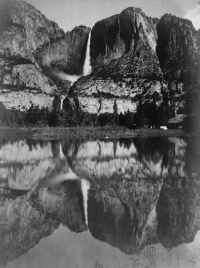 Lodging
There is a great range in the type of lodging available inside Yosemite National Park, as well as a variety of hotels and motels outside its boundaries. Inside the park, you can stay at 4 star rated hotels and bed and breakfasts, such as the Ahwahnee. Expect to pay dearly for that choice, however, upwards of $450 per night. Other choices are well below that number, including Yosemite Lodge at the Falls, the Wawona Hotel, Curry Village, Housekeeping Camps, Tuolumne Meadows Lodge, White Wolf Lodge, and the High Sierra Camp. Yosemite lodging can be reserved up to one year in advance.

Photo above: 1906 picture of Yosemite Falls reflecting into a lake. 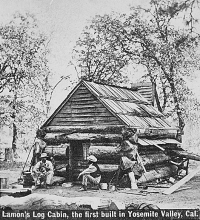 Yosemite National Park is a haven for campers, but it is a very popular haven. Some require reservation (up to five months in advance is allowed), while others operate on a first-come, first-served basis, but even those often fill by noon during peak months. Peak months run from April to September, and some campgrounds are open year round. There is a great variety, from those in Yosemite Valley (Upper Pines, Lower Pines, North Pines, and Camp 4) to South (Wawona and Bridalveil Creek) to North (Hodgdon Meadow, Crane Flat, Tamarack Flat, White Wolf, Yosemite Creek, Porcupine Flat, Tuolumne Meadows).

Most of these RV sites, except for Camp 4, Tamarack Flat, and Yosemite Creek. To check on their availability or need for reservations, go to Recreation.gov. There are also backcountry campgrounds that require a wilderness permit, but are not on the reservation system. There are also a number of campgrounds, and other motel and hotel choices, outside the park. Check your favorite online travel site for the one that meets your needs. 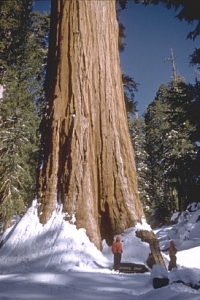