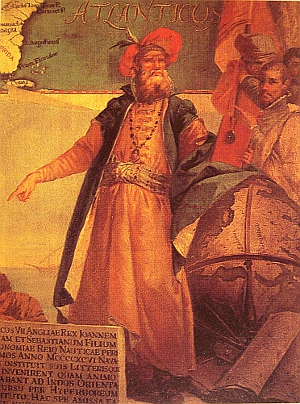 September 24, 1493 - Columbus began his second trip to the American colonies with seventeen ships and 1,200 men. These men were meant to colonize the land found and claimed during the journey beyond the few left in the Americas after the first voyage. He would arrive in the New World again on November 3, 1493 and explore more of the islands in the Caribbean, including the lands of Puerto Rico and today's Dominican Republic. 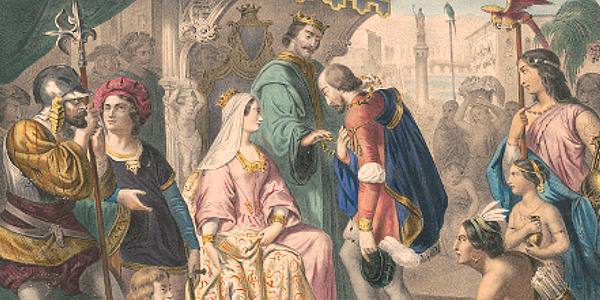 Upon his return from the first voyage and Columbus' explanation of his findings to the King and Queen of Spain in Barcelona in April of 1493, preparations began quickly for a return to the found lands and more exploration. Columbus was feted with praise, and even got to ride about the city with King Ferdinand, the first such honor for someone outside the King's family. Admiral Columbus would return to Espaniola to relieve the settlers that remained, augment their number, and conquer the island with a corresponding mandate from King Ferdinand and Queen Isabella to maintain friendly relations with the natives. A new privelege was granted for the second voyage on May 28, 1493. They got permission from Pope Alexander VI as well.

Christopher Columbus returned to Seville to make preparations for the journey with ample provisions secured on seventeen ships of various size and one thousand two hundred men, including Ponce de Leon, founder of the first permanent settlement in what is now United States territory, and the father of the eventual Bishop de Chiapas, the first protector of the indigenous tribes. By September 25, 1493, they left Cadiz, where the ships had been gathered, for the Americas with men, horses, sheep, and cattle. Their goal, conquer the Taino tribe and settle the islands oF Espaniola (Hispaniola) discovered. On November 2, they sighted land, Dominica, before anchoring in Mariagalante, named after his flagship. On November 4, 1493, he discovered the island of Guadalupe and searched through a small town, abandoned by the adults upon their arrival.

Letter of The Journey Itself

Letter of Dr. Chanca, of Sevilla, Physician on the Second Voyage.

Journey from Spain to Indies (Caribbean) - "Since the occurrences which I relate in private letters to other persons are not of such general interest as those which are contained in this epistle, I have resolved to give you a distinct narrative of the events of our voyage, as well as to treat of the other matters which form the subject of my petition to your Lordship. The news I have to communicate are as follows: The expedition which their Catholic Majesties sent, by Divine permission, from Spain to the Indies, under the command of Christopher Columbus, Admiral of the Ocean, left Cadiz on the twenty-fifty of September, of the year [1493, with seventeen ships well equipped and with 1200 fighting men or a little less,] with wind and weather favorable for the voyage. This weather lasted two days, during which time we managed to make nearly fifty leagues; the weather then changing, we made little or no progress for the next two days; it pleased God, however, after this, to restore us fine weather, so that in two days more we reached the Great Canary. Here we put into harbor, which we were obliged to do, to repair one of the ships which made a great deal of water; we remained all that day, and on the following we set sail again, but were several times becalmed, so that we were four or five days before we reached Gomera. We had to remain at Gomera some days to lay in our stores of meat, wood, and as much water as we could stow, preparatory to the long voyage which we were expected to make without seeing land: thus through the delay at these two ports, and being calmed one day after leaving Gomera, we were nineteen or twenty days before we arrived at the island of Ferro. After this we had, by the goodness of God, a return of fine weather, more continuous than any fleet ever enjoyed during so long a voyage, so that leaving Ferro on the thirteenth of October, within twenty days we came in sight of land; and we should have seen it in fourteen or fifteen days, if the ship Capitana had been as good a sailor as the other vessels; for many times the others had to shorten sail, because they were leaving us much behind. During all this time we had great good fortune, for throughout the voyage we encountered no storm, with the exception of one on St. Simon's eve, which for four hours put us in considerable jeapardy.

On the first Sunday after All Saints, named the third of November, about Dawn, a pilot of the flagship cried out, "The reward, I see the land!"

What They Found Upon Sighting a Town (Guadalupe) - "As soon as we approached the island, the admiral ordered a light caravel - to run along the coast to search for a harbor. The captain of this small vessel put into land in a boat, and seeing some houses leapt on shore and went up to them, the inhabitants fleeing at sight of our men. He then entered the houses and found therein various household articles that had been left unremoved, from among which he took two parrots, very large and quite different from the parrots we had before seen. He found also a great quantity of cotton, both spun and already prepared for spinning, and provisions of food, of all of which he brought along with him a portion. Besides those articles of food he likewise brought away with him four or five bones of human arms and legs. When we saw those bones we immediately suspected that we were then among the Caribbee islands, whose inhabitants eat human flesh, because the admiral, guided by the information respecting their situation he had received from the Indians of the islands he had discovered during his former voyage, had directed the course of our ships with a view to find them, both on account of these Caribbee islands being nearest to Spain and also in the direct track to the island of Hispaniola, where he had left some of his men when he returned to Spain. Thither, by the goodness of God and the wise management of the admiral, we came in as straight a channel as if we had sailed by a well known and much-frequented route.

This island of Guadeloupe is very large, and on the side where we arrived it seemed to us to be about twenty-five leagues in length. We sailed more than two leagues along the coast in search of a harbor. On the part towards which we moved it appeared all made up of very high mountains, and on the part we left there were extensive plains;- on the shore were a few small villages whose inhabitants fled as soon as they saw the sails of our ships. At last, after having gone about two leagues' distance, we found a port late in the evening."

Second Voyage Reaches La Navidad, November 27, 1493, Harbor of First Voyage Where Settlers, 39 in Number, Were Left - This harbor is twelve leagues from the place where the Christians had been left by the admiral on his return to Spain from the first voyage, and under the protection of Guacamari, a king of these Indians who I suppose is one of the principal sovereigns of this island. After we anchored at said spot, the admiral ordered two lombards to be fired in order to see if there was any response from the Christians, who would fire in return, as a salute, for they also had lombards with them; but we received no reply, nor did we see on the sea-shore any body, or any sign of houses whatever. Our people then became very much chagrined, and began to realize what the circumstances naturally suggested.

While all of us were in this depressed state of mind, the same canoe with several Indians on board which we had seen that afternoon, came up to where we were anchored, and the Indians with a loud voice inquired for the admiral. They were conducted to the admiral's vessel, and remained there on board for three hours talking with the admiral in the presence of us all. They said that some of the Christians left on the island had died of disease, others had been killed in quarrels amongst themselves, and that those who remained were all well. They also said that that province had been invaded by two kings named Caonabo and Mayreni, who burned all the houses, and that king Guacamari was at another place, some distance away, lying ill of a wound in his leg, which was the reason why he had not come himself in person.

Next morning some of our men landed by order of the admiral, and went to the spot where the Christians had been housed. They found the building, which had been fortified to a certain degree by a palisade surrounding it, all burned up and levelled with the ground.

... We had already been told by one of the Indians who, as interpreters, were carried to Spain and brought back with us, and who had conversed on board with the natives that came in their canoe to talk to the admiral, that all the Christians left on that island had been killed, but we did not believe it. Caonabo and Mayreni with their warriors had made an attack upon them, and burnt down the buildings."

Outcome of the Second Voyage

On his second voyage, Columbus had discovered and named, from the European perspective, a variety of Caribbean islands prior to landing in Hispaniola, including Montserrat, Antigua, Redonda, Nevis, Saint Kitts, Saint Eustatius, Saba, Saint Martin, Saint Croix, the Virgin Islands, and Puerto Rico.

Once finding the settlement constructed during the first voyage destroyed and the thirty-nine crew members of the initial expedition who had remained killed, Columbus ordered another settlement built, named Isabella, short-lived, and established a fort in the interior. Still convinced that China was around the corner, Columbus took three ships and sailed west, finding Cuba and Jamaica instead. He returned to Hispaniola on August 20, 1493. A petition was sent back to the Spanish Monarch, seeking permission to enslave the natives, in part to replace the lack of gold to repay investors in the journey. It was denied. Columbus did it anyway, enslaving one thousand six hundred Arawak, of which five hundred and sixty were sent back to Spain. Once back in Spain, legal proceedings released those that survived. Back in Hispaniola, many of the original sixteen hundred were still held as slaves.

With the gold less than reported and disease within the colony, Columbus returned to Spain on March 10, 1496 with two ships, arriving on June 11 with two hundred dissatisfied colonists, and thirty native prisoners. He wanted more assistance and supplies for establishing the colony. One of the crew members of the second voyage was the father of the man who would become the Bishop of Chiapas, Bartolome' de las Casas, and begin the conversation about the cruelty of treatment of the Amerindians. Bartolome and his father had seen the Sevilla parade upon Columbus' return from his first voyage.

The third voyage of the Columbus expeditions to the New World would begin on May 30, 1498. 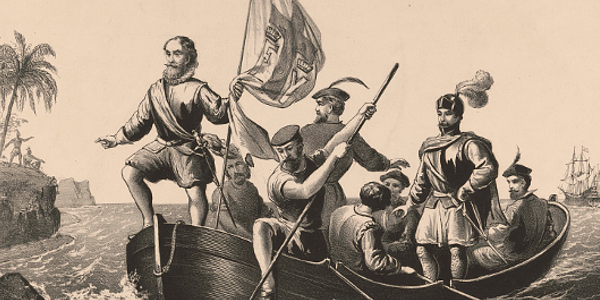 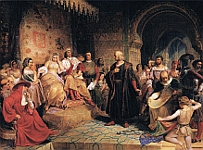 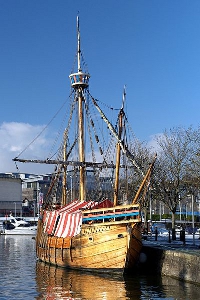