July 29, 1609 - Samuel Champlain battles an Iroquois party after his further exploration of the New World discovers Lake Champlain in early July and claims Vermont for the Kingdom of France. 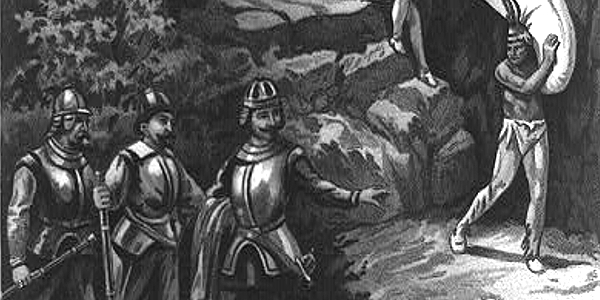 Samuel de Champlain was born in Brouage on the west coast of France and had been a warrior in the French religious wars as a protege of Henry IV, head of the Bourbon dynasty. Henry IV thought Champlain was the man to head exploration and settlement in North America for France after the first settlement attempts had failed. Champlain had studied the topic and arrived for the first time on May 26, 1603, gaining information and making allies with the Indian tribes in Maine. Other settlements followed along the St. Croix River and in Nova Scotia in 1604 and 1605 prior to first permanent New France settlement at Quebec on July 3, 1608.

By 1609, Champlain was anxious to explore the land south of the St. Lawrence. One problem stood in the way. Despite a goal of peaceful cohabitation with the Indian tribes in the area, that goal was thwarted by constant battles between the tribes, particulary with the Iroquois band of Mohawks against the Wendat (Huron), Algonquin, and Montagnais. They were essentially at war with all of their neighbors. With diplomacy going nowhere, Champlain decided that he should, with his Indian allies, head into the interior and attack the Mohawks, hoping that this show of strength would cause them to stop their constant battles.

On June 28, 1609, he left Quebec, heading south into Iroquois territory with nine Frenchmen and three hundred warriors. Within one week, his party was reduced to two Frenchmen and sixty allies, with the remainder turning back as they entered Iroquois territory of the Richelieu River, where no white man had ever entered. By July 14, they reached the large lake, Lake Champlain, which he would name after himself, and explore both shores in today's Vermont and New York. He would claim Vermont for France. They approached the southern end of the lake on July 29, the Ticonderoga chute that separated Lake Champlain from Lake George. That night, at ten o'clock, they saw shadows of men in large canoes plying the water. They were Mohawk warriors.

The Battle of Ticonderoga

Champlain and his men moved away from the Mohawk party into the middle of the lake while the Mohawk warriors landed on the sandy beach between Ticonderoga and Willow Point. They built a small barricade and waited for dawn.

Champlain sent some of his Indian allies to shore and scouts ahead while forming into fighting formation as dawn approached. They approached the shoreline fort with Champlain armed with his arquebus, a wheel-lock weapon akin to a musket, that gave them an advantage. The Mohawk formed, two hundred strong, outside the fort in a small clearing with wooden armor and shields; both sides were formed in tight formation. Once within fifty yards, Champlain moved to the front, aimed his weapon at two chiefs as they armed their bows. With one shot, the two chiefs and one warrior fell.

The fight continued with both sides firing arrows, but as Champlain reloaded his weapon, his two French companions, both armed with an arquebus, fired. Another Mohawk chief was killed, causing the Mohawk formation to split and the warriors to retreat into the woods. Champlain and his allies pursued, killing more than fifty and capturing twelve.

... When it was evening, we embarke in our canoes to continue our course; and, as we advanced very quietly and without making any noise, we met on the 29th of the month the Iroquois, about ten o'clock at evening, at the extremity of a cape which extends into the lake on the western bank. They had come to fight ...

Our forces also passed the night, their canoes being drawn up close to each other, and fastened to poles, so that they might not get separated, and that they might all in readiness to fight, if occasion required. We were out upon the water, within arrow range of their barricades. When they were armed and in array, they dispatched two canoes by themselves to the enemy to inquire if they wished to fight, to which the latter replied that they wanted nothing else; but they said that, at present, there was not much light, and that it would be necessary to wait for daylight, so as to be able to recognize each other; and that, as soon as the sun rose, they would offer us battle. This was agreed to by our side ...

As soon as we had landed, they [the savages] began to run for some two hundred paces towards their enemies, who stood firmly, not having as yet noticed my companions, who went into the woods with some savages. Our men began to call me with loud cries; and, in order to give me a passage-way, they opened in two parts, and put me at their head, where I marched some twenty paces in advance of the rest, until I was within about thirty paces of the enemy, who at once noticed me, and, halting, gazed at me, as I did also to them. When I saw them making a move to fire at us, I rested my musket against my cheek, and aimed directly at one of the three chiefs. With the same shot, two fell to the ground; and one of their men was so wounded that he died some time after. I had loaded my musket with four balls. When our side saw this shot so favorable for them, they began to raise such loud cries that one could not have heard it thunder. Meanwhile, the arrows flew on both sides. The Iroquois were greatly astonished that two men had been so quickly killed, although they were equipped with armor woven from cotton thread, and with wood which was proof against their arrows. This caused great alarm among them. As I was loading again, one of my companions fired a shot from the woods, which astonished them anew to such a degree that, seeing their chiefs dead, they lost courage and took to flight, abandoning their camp and fort, and fleeing into the woods, whither I pursued them, killing still more of them. Our savages also killed several of them, and took ten or twelve prisoners. The remainder escaped with the wounded. Fifteen or sixteen were wounded on our side with arrow-shots; but they were soon healed. 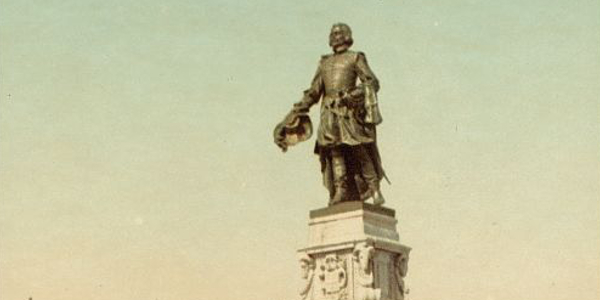