July 23, 1612 - Sir Samuel Argall, newly named Admiral of Virginia, sails from England to the colonies to expel the French from English territories. 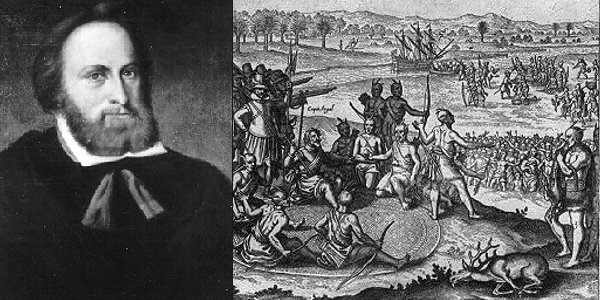 The British were getting tired of the competition for what they thought of as their territory in the New World. The Virginia Company of London was having trials and tribulations at Jamestown, but succeeding in many ways in establishing the new colony despite the problems. The Virginia Company of Plymouth had a tougher go in New England with the failure at the Popham Colony, and still eight years before their second attempt at Plymouth, but they still held claims to the northern coastal territory that New France was vying for at St. Croix Island, Quebec, and the colony at Port Royal. The crown wanted to let New France know who was in charge.

Samuel Argall was an English fisherman with experience in the waters of Newfoundland, England, and Spain. In 1609, he became a Jamestown colonist, setting out from England on May 15, 1609, and charged with finding a shorter route to Jamestown, one that would not take the twelve to eighteen weeks the normal route toward the Caribbean had always taken the supply ships to the colony. When he arrived on July 23, 1609, having taken the route along the 30th parallel, he had succeeded in cutting the time of the journey to nine weeks and six days. While moored off Cape Henry that month, Argall also chased away a Spanish ship searching for info on the colony. These acts, of course, were greatly advantageous to the colony and rose Argall in the eyes of the Virginia Company of London. When Argall returned to England in the autumn, then captained another supply ship back by June 10, 1610, his arrival saved the colony, who had spent the winter and spring starving (only sixty-five remained with three hundred and fifty perishing since their arrival in 1607) and thinking that they would have to abandon it. Argall was made a captain of the musketeers, sent on missions by the governor, and would participate in raids against the Powhatan Confederacy, attacking the Warraskoyack village in September of 1610.

However, Argall was about to rise even further within the hierarchy of the settlement. Upon a return to England in 1611, Argall was appointed Admiral of Virginia by the Trinity term of the Virginia Court, given a one hundred and thirty ton veseel named Treasurer, sixty men, fourteen cannons, and new instructions. He was to rid the settlers of New France from territory that Great Britain claimed as theirs. He set sail for the colonies on July 23, 1612, arriving in just fifty-seven days, the fastest journey yet, landing in Jamestown on September 17.

Orders to Argall from the Virginia Court

"... shall and may, from time to time, and at all times for ever hereafter, for their several Defences, encounter, expulse, repel, and resist, as well by Sea and by Land, by all Way and Means whatsoever, all and every such Person and Persons, as without the expecial Licence of the said several Colonies and Plantations."

Argall as Admiral of Virginia

Samuel Argall took his task seriously, expanding it to further tasks beyond ridding New France from New England. For the next year, he explored the Eastern Coast and traded the Potawomecks. When 1613 arrived, he pushed himself into trying to find a solution to the Anglo-Powhatan conflict that had been raging since 1609. On April 13, Samuel Argall kidnapped Pocahontas from her stay with the Potawomecks, with her eventual capture and eduction with the English during a negotiation standoff that lasted for a year, leading to her marriage to John Rolfe and end of the war. During the standoff, Samuel Argall was ordered to pursue his initial objective, the battle against New France and its New England and Acadia settlements.

Actions of Argall Against Their New World Competition

July 2, 1613 - Argall routs a French Jesuit colony of Saint-Sauveur at an outpost built two months earlier on Mount Desert Island in today's Maine and claims it for King James. Three missionaries are killed and three wounded. He returned to Jamestown with fourteen to twenty prisoners. Argall would return a second time to the settlement, plant a Protestant cross, and destroy the remaining structures.

November 1, 1613 - Argall attacks French colony at the Port Royal Habitation with a forty man landing party, destroys its structures, and returns to Jamestown with the supplies of the French settlement.

November 1613 - Argall sails into Manhattan and demands the Dutch colony submit to England with annual tributes paid by the small settlement. Annual tribute the next year refused to be paid and Dutch begin to build forts on the Hudson River in 1614. 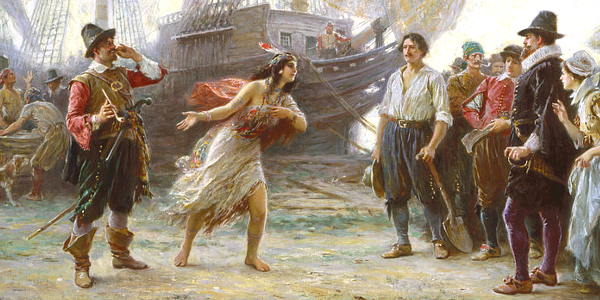