April 5, 1614 - The history of Jamestown continues with the marriage of Pocahontas to John Rolfe, who would bring tobacco seeds to the colony and begin its harvesting this year. Their marriage led to eight years of peace among the colonists and Indians. 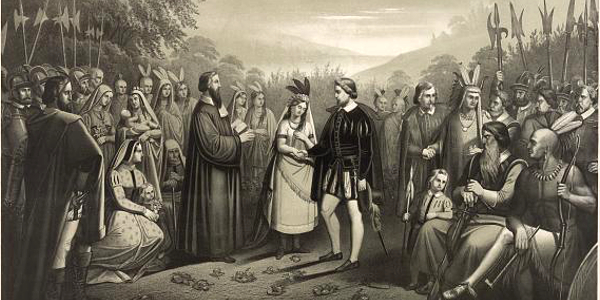 The Jamestown Settlement had been on the Virginia tidewater for seven years and dealt with the harsh colonization against weather and the Powhatan Confederacy. When the English Virginia Company arrived in 1607, Pocahontas was eleven years old. She had been born to the name Amanute, sometimes called Matoaka, but more often referred to by her nickname, meaning playful one, Pocahontas. She was Powhatan Confederacy royalty, the daughter of the chief Wahunsenaca, also known as Chief Powhatan. The Powhatan Confederacy was a collection of thirty tribes, reaching a max of twenty-five thousand in population.

Once the English arrived, her father refused to meet with the Virginia Company's leader, Captain John Smith, for six months, waiting until winter, when his brother Opechancanough captured Smith and brought him to the chief. They intended to kill him, but Pocahontas rushed in, refusing to allow it. It is unknown whether it was her father's actual intent to kill or scare Smith, but the legend of Pocahontas and her bravery and kindness lingers today. Wahunsenaca allowed the Captain to return to Jamestown for the price of two guns and a grindstone. The Confederacy would allow the English to stay.

Over the next year, the Powhatan Confederacy treated the English well, bringing the settlement food, most often accompanied by Pocahontas. But the peace diminished as food became scarce and trade between the two halted, with raids by the English against the Powhatan to secure substanence leading to the burning of several Indian towns. A negotiation for an exchange of goods was fostered, but the Chief eventually decided against it, intending to kill Captain John Smith again. Pocahontas warned Smith, before vanishing into the wilderness. She never visited Jamestown again with Smith in command, moving futher inland to the Chickahominy River.

By 1610, Pocahontas was married to Kocoum, a lesser Indian warrior and lived among the Powhatan, with little accounts by the English. That changed by 1613 when she was captured by the English under the command of Captain Samuel Argall, brought back to Jamestown and held for ransom. Her father agreed to many of the English demands as an opening salvo of negotations and peace agreements were bantered about, but into 1614, Pocahontas still remained at Jamestown as a hostage, learning more about the English ways. By the time Chief Powhatan agreed on a ransom price, Pocahontas had decided to stay. It was during this instruction that she met John Rolfe.

Courtship and Marriage to John Rolfe

John Rolfe left England for the Jamestown Settlement in 1609 on the Third Supply Fleet with wife Sarah Hacker and their daughter. He arrived alone in Jamestown in May of 1610. A storm had caused their ship to be driven into the reefs of Bermuda to save the passengers, but during the ten month stay, his wife and daughter perished. One hundred and forty-two men and women of the Third Supply Fleet reached Jamestown on two newly constructed boats to find the settlement with only sixty people remaining. With their arrival, the colony began to grow again. Rolfe began to cultivate tobacco and trade increased, eventually establishing a plantation thirty miles up the James River.

After Pocahontas was captured and learned more of the English ways, she converted to Christianity and met John Rolfe during her education. She was renamed Rebecca. They fell in love and she was divorced from her first husband. Some oral histories state that Captain Argall had Kocoum killed after her capture. It is unknown which version is actually accurate. A marriage ceremony was arranged with the chief's blessing. On April 5, 1614, Richard Buck, the Minister of the colony and eventual chaplain at the House of Burgesses, married them. Some state that it was not Buck, but Alexander Whitaker, another minister, who officiated the ceremony. The Powhatan handed Pocahontas and Rolfe a dowery, thousands of acres of land across the James River from Jamestown. They never lived on the land, preferring Rolfe's plantation, Varina Farms, where they resided for two years.

Pocahontas and Jamestown After Marriage

Peace reigned between the Powhatan people and Jamestown once the marriage occurred. On January 30, 1615, Pocahontas and Rolfe had their son Thomas. With good relations, the English saw use of Pocahontas as a way to convince further colonization of the Virginia region. They sent Rolfe and his wife back to England, arriving on June 12 with their son. She was treated like visiting royalty, arriving with a dozen Powhatan servants, and toured the country. She even met Captain John Smith again. Pocahontas, however, would never return to Virginia. She died in March of 1817 in England and was buried on March 21, 1817.

Without Pocahontas to bridge the divides between the Powhatan Confederacy and the English at Jamestown, peace would not continue. When her father Wahunsenaca, Chief Powhantan, died one year later, ascending his brother, Opechancanough, a fierce warrior, to be chief, relations were bound to disintegrate further. The Jamestown colony continued to expand in 1919, taking more Powhatan land, established the first assembly known as the House of Burgesses (forerunner of the Virginia General Assembly), and the returned John Rolfe married again. Three years later, in 1622, Opechancanough had enough. On March 22, 1622, warriors attacked numerous outlying settlements, killing three hundred, although Jamestown was spared. 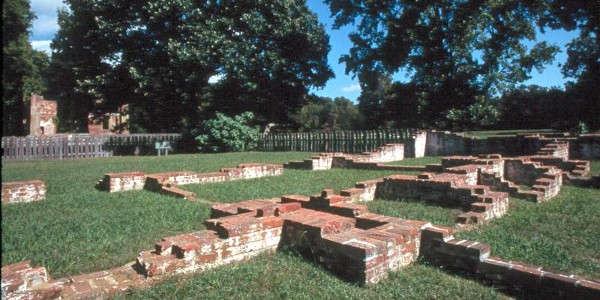