March 4, 1629 - Royal charter for the Massachusetts Bay Colony granted by King Charles I, further establishing the colony and leading to its expansion.

Some of their investors, the Dorchester Company under Puritan Reverend John White, had failed in their first attempt, three years of a fishing settlement, at the colony of Cape Ann, begun in 1623. However, some of the remnants of the original thirty-two (some sources contend the number to be fifty-two) settlers of that colony remained in New England, i.e. Roger Conant, and established Salem Village to the wishes of Minister White, although White, himself, had never emigrated. Conant had previously been part of the Plymouth Colony, arriving in 1624, likely on the ship Ann, but became part of the Puritan faction, who were expelled from Plymouth in July 1624. Conant, himself, was not expelled, but would later rejoin that faction at Nantasket, then Cape Ann, and later Salem.

"Soon after the removal to Salem the settlement was in danger of going abandoned through the invitation of their minister, Rev. John Lyford, to settle in Virginia, and the decision of most of the colonists, including Woodbury, Balch and Palfrey, to accompany him. They tried to induce Conant to go with them, but "he had taken his position, and pledged his faith conditionally, that here he would stand, though perils from savage and hardship of a new settlement clustered around him," and could not be moved. On the contrary, he so placed the importance of continuing the undertaking before them, that all, except Lyford, remained. Concerning this period of the history of the colony, he says, in his petition to the General Court," when in the infancy thereof, it was in great hassard of being deserted, I was a means through grace assisting me, to stop the flight of those few that there then were heere with me, and that by my utter deniall to goe away with them, who would have gone either for England or mostly for Virginia, but hereupon stayed to the hassard of our lives." On the same subject Hubbard says: "God who is ready to answer his people before they call, as he had filled the heart of that good man, Mr. Conant, in New England, with courage and resolution to abide fixed in his purpose, notwithstanding all opposition and persuasion he met with to the contrary, had also inclined the hearts of several others, in England, to be at work about the same design."

After the Dorchester debts were satisfied, The New England Company for a Plantation in Massachusetts Bay, which would become the Massachusetts Bay Colony, with new investors and some of the old Dorchester financiers, took over the Cape Ann Colony assets after King Charles I gave them the rights to the area from the Charles River to the Merrimack River in March.

On June 20, 1628, John Endecott, a Puritan, sailed for the colony on the ship Abigail with fifty to one hundred planters, arriving on September 8, 1628. He would become governor in 1629 after King Charles granted them a royal charter, March 4, 1629, replacing de facto governor Roger Conant, and the story of the Massachusetts Bay Company now took precedence.

Three hundred and fifty new Puritan settlers would join the colony on June 29, 1629, led by Reverend Francis Higginson. They sailed into the harbor on six ships; Talbot with Captain Benjamin Gonson/Ganson, Sir Admiral Richard Hawkins, and Sir Francis Drake; ship George Bonaventure; Lyon's Whelp; Four Sisters; the Mayflower, which was an unrelated ship to that of the Plymouth expedition; and supply ship Pilgrim. Note: the number three hundred and fifty seems to conflict with Higginson's personal account, which seems to indicate closer to two hundred. The total number at the colony at that time, after Higginson's arrival, may better explain the three-hundred and fifty number.

The Higginson fleet came well fortified. There were sixty-one cannon and eighteen other guns. The fortifying element extended beyond defense as well, arriving with one hundred and fifteen cattle, forty-one head of goat, rabbits, chickens, horses, and oxen.

The Massachusetts Bay Colony continued to grow after the harsh winter of 1629-30, as the Winthrop fleet, known as the summer of the Great Migration, left England on April 8, 1630. Seven hundred colonists would arrive over the next year on eleven ships, with more arriving over the next five years. With these arrivals, the foundation of the colony, and its eventual domination of the other colonies in the vicinity, predominantly Plymouth, was secure.

Of the Present Condition of the Plantation, and what it is . When we came first to Neihum-kek, we found about halfe a score Houses, and a faire House newly built for the Gouernour, we found also aboundance of Corne planted by them, verie good and well likeing. And we brought with vs about two hundred Passengers and Planters more, which by common consent of the old Planters were all combined together into one Body politicke, vnder the some Gouernour.

There are in all of vs both old and new Planters about three hundred, whereof two hundred of them are settled at Neihum-kek, now called Salem: and the rest haue Planted themselues at Masathulets Bay, beginning to build a Towne there which we doe call Cherton, or Charles Towne.

We that are settled at Salem make what hast we can to build Houses, so that within a short time we shall haue a faire Towne. We have great Ordnance, wherewith we doubt not but we shall fortifie our selues in a short time to keepe out a potent Aduersarie. But that which is our greatest comfort, and meanes of defence aboue all other, is, that we haue here the true Religion and holy Ordinances of Almightie God taught amongst vs: Thankes be to God, we haue plentie of Preaching, and diligent Catechizing, with strickt and carefull exercise, and good and commendable orders to bring our People into a Christian conuersation with whom we haue to doe withall. And thus we doubt not but God will be with vs, and if God be with us, who can be against us?

Image above: Roger Conant's house in Salem, Massachusetts Bay Colony, 1898, illustration from Upper Canada Sketches, Thomas Conant. The house had been originally part of the Cape Ann Colony, later dismantled, then reassembled at Salem. Courtesy British Library via Wikipedia Commons. Image below: Photo from the celebration of the erection of a tablet at the site of the Massachusetts Bay Colony first settlement in Gloucester, 1907, Detroit Publishing Company. Courtesy Wikipedia Commons. Info source: "The Settlement of Cape Ann: What is the Real Story," 2018, Mary Ellen Lepionka; "New England's Plantations, or a Short and True Description of the Commodities and Discommodities of that Company," 1680, Francis Higginson; "A History of the Conant Family in England and America," 1887, Frederick Odell Conant; "Memoir of John Endecott, First Governor of the Massachusetts Bay Colony," Charles M. Endicott; Wikipedia. 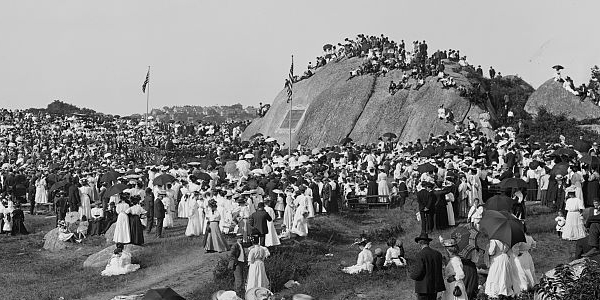