No weather forecasts. No app on your phone. Not even a Farmer's Almanac. Perhaps a notion from the manner in which the local animal population and birds were reacting. Maybe a feeling from the native population about how the tides and the winds were blowing. In 1635, the colonists of Jamestown, and Plymouth, and Massachusetts Bay, had no notice of weather to prepare for. On August 26, 1635, the Great Colonial Hurricane plowed into New England. It had passed by Jamestown one day before, but had not made landfall, likely passing to the east.

It is reported to be the worst tropical weather to hit the colonies since the Europeans arrived. There was a storm surge of fourteen (Narragansett Bay) to twenty-two feet (estimated 21.7 feet at the head of Buzzards Bay). It pushed into the farm fields of Dorchester, ruining its crops. Homes and other buildings were destroyed by the high winds, including Plymouth's Aptucxet Trading Post. Ships at sea were lost. The Watch and Wait sunk with twenty-three passengers on board; only Antony Thatcher and his wife survived by making it to what is now known as Thatcher Island. The Angel Gabriel, anchored off the coast at Permaquid, had dispatched most of its settlers ashore, but several newly arriving colonists stayed on board. The ship was wrecked by the hurricane, losing their cargo as well as the lives of those who remained on ship. The native population suffered much loss; it was reported that several dozen were killed.

In today's technology, the Great Colonial Hurricane of 1635 would be characterized as a strong Category 3 storm (estimated 3.5 on the Saffir/Simpson scale) by the time it hit New England, and reminiscent of the path of Hurricane Edna in 1954. That would have taken it across Long Island. It would have had winds approaching one hundred and twenty-five miles per hour. Earlier, in the south Atlantic, it may have been a Category 4 or 5 storm. The estimated pressure was 938mb to 941mb as it passed from Long Island through southern New England. If those estimates from the analysis by the National Oceanic and Atmospheric Administration are accurate, that would make it the most intense hurricane to ever hit north of North Carolina.

August 16. The wind having blown hard at S. and S.W. a week before, about midnight it came up at N.E. and blew with such violence, with abundance of rain, that it blew down many hundreds of trees, near the towns, overthrew some houses, and drove the ships from their anchors. The Great Hope, of Ipswich, being about four hundred tons, was driven aground at Mr. Hoffe's Point, and brought back again presently by a N.W. wind, and ran on shore at Charlestown. About eight o'clock the wind came about to N.W. very strong, and it being then about high water, by nine the tide had fallen three feet. Then it began to flow again about one hour, and rose about two or three feet, which was conceived to be, that the sea was grown so high abroad with a N.E. wind, that, meeting with the ebb, it forced it back again.

This tempest was not so far as Cape Sable, but to the south more violent, and made a double tide all that coast... The tide rose at Narragansett fourteen feet higher than ordinary, and drowned eight Indians flying from their wigwams.

This year, the 14th or 15th of August (being Saturday) was such a mighty storm of wind and rain as none living in these parts, either English or Indians, ever saw. Being like, for the time it continued, to those hurricanes and typhoons that writers make mention of in the Indies. It began in the morning a little before day, and grew not by degrees but came with violence in the beginning, to the great amazement of many. It blew down sundry houses and uncovered others. Divers vessels were lost at sea and many more in extreme danger. It caused the sea to swell to the southward of this place above 20 feet right up and down, and made many of the Indians to climb into trees for their safety. It took off the boarded roof of a house which belonged to this Plantation at Manomet, and floated it to another place, the posts still standing in the ground. And if it had continued long without the shifting of the wind, it is like it would have drowned some part of the country. It blew down many hundred thousands of trees, turning up the stronger by the roots and breaking the higher pine trees off in the middle. And the tall young oaks and walnut trees of good bigness were wound like a withe, very strange and fearful to behold. It began in the southeast and parted toward the south and east, and veered sundry ways, but the greatest force of it here was from the former quarters. It continued not (in the extremity) above five or six hours but the violence began to abate. The signs and marks of it will remain this hundred years where it was sorest. The moon suffered a great eclipse the second night after it.

Note: dates listed in the journals of the colonists differ from the current date most historians now assume. They date it to August 26 due to the arrival of the eclipse, which occurred on August 28, 1635, as noted in Bradford's journal. 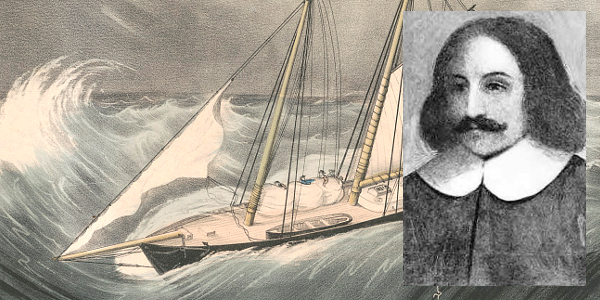