September 21, 1638 - Pequot War ends with Treaty of Hartford after three years of battles between the New England colonists and native tribes. It had been a long three years of conflict between the colonists of the Plymouth, Massachusetts Bay, Connecticut, and Saybrook colonies against the forces of the Pequot and their allies. What had started out as a minor skirmish at Block Island on July 20, 1636, when trader John Oldham and several crew were killed by the Narragansett to discourage trade with the rival Pequot tribe, had turned into a most consequential war to date in New England. The culprits had escaped into the protection of the Pequot.

The death of John Stone, with crew, in January 1634 by the hand of the Niantics, allies of the Pequot, had started much of the trouble. The lack of the food supply in New England from the poor harvest of 1635 caused by the Great Colonial Hurricane on August 26, 1835, accentuated the tension. Both the tribes and colonists were little prepared to deal with famine. The addition of the new colonies of Connecticut (March 3, 1636), and Saybrook, Saybrook Fort, several months before (November 1635 by John Winthrop, Jr.), along the Connecticut River, had chaffed the tribes as well.

John Endecott led the militia of the Massachusetts Bay Colony along with his allies in a raid against the Indians of Block Island, destroying the settlement as retribution for Oldham's death, which led to Pequot raids against the Connecticut colony. When the Pequot, enemies of the Narragansett, could not convince them to join in the fight against the English, instead pushing them to side with Massachusetts Bay and the other colonies, the fight turned into the Pequot and Western Niantic against the other New England tribes and the English world.

Battles continued through 1636 and 1637 before the Battle of Munnacommock Swamp (Fairfield Swamp) ended in English victory despite the escape of Pequot leader Sassacus. After his death by the Mohegan one month later, the effective fighting in the Pequot War ended.

The end of the Pequot War would culminate with the Treaty of Hartford, but the conclusion of fighting in this war not only ended the Pequot War, it essentially eliminated the Pequot tribe altogether. Their political and cultural footprint was erased going forward with a ban on their two hundred survivors staying on their traditional lands. They would be parceled out to the tribal victors, the Narragansett and Mohegan, with some, previously captured, bound into slavery in Bermuda or the New England colonies. From that point forward, any mention of the Pequot by place and name was also eliminated. There would no longer be a Pequot River (now the Thames) or a Pequot Village (now New London).

The end of the Pequot War beget a period of thirty-eight years of peace between the New England colonies and the remaining area tribes, lasting until King Philip's War in 1675.

Timeline of the Pequot War

July 20, 1636 - Trader John Oldham and crew were killed by some members of the Narragansett nation at Block Island. Murderers escape into the Pequot tribe.

August 20-30, 1636 - Massachusetts Bay Colony invade Block Island with ninety soldiers led by John Endecott as retribution, then destroy villages of Sassacus, the Pequot Sachem, on both sides of the river.

September 1636 - Saybrook garrison at Comfort Point attacked, leading to its abandonment and destruction by Pequot warriors, who subsequently attempt a peace alliance with the Narragansett.

October 21, 1636 - English and Narragansett sign a formal alliance against the Pequot. Three days later, the Pequot gain allies in the Western Niantic.

May 1, 1637 - Ninety man militia raised for "offensive war" against the Pequot.

May 10, 1637 - Mistic campaign begins as English and Narraganset allies prepared to attack the Pequot. Forces rise to seventy-seven English, one hundred Mohegan and River Indians, and three hundred Narragansett over the next two weeks.

May 25, 1637 - Battle of Mistic Fort, fortifield village of the Pequot with one hundred and fifty warriors, attacked by Captains Mason and Underhill. Outcome English victory often known as the Mistic Massacre ends with majority of Pequot from the fort killed. Pequot reinforcements from their main fortified village at Wienshauks counterattack, but are unable to prevent English and allies from reaching their ships.

July 13-14, 1637 - Battle of Munnacommock Swamp (Fairfield Swamp) pauses with Pequot non-combatants (women and children, many of whom would be sold into slavery) and two hundred of the host Sasquas tribe agreeing to surrender, but one hundred Pequot warrios and leader Sassacus refuse and remain to fight. Battle continues to English advantage before siege line is opened, allowing Pequot leader Sassacus and other warriors to escape.

August 5, 1637 - Evidence that Sassacus, the Pequot leader, has been killed by Mahican (Mohegan) warriors, reaches Boston.

September 21, 1637 - Treaty of Hartford negotiated between English, Mohegan, and Narragansett, sealing the fate of the Pequot survivors.

A Convenant and Agreement Made Between the English inhabiting the Jurisdiction of the River of Connecticut of the one part and ... the Narragansetts and the Mohegans ... as follows at Hartford on 21st September 1638.

There is a Peace ... made between the Narragansett and Mohegan Indians and all former injuries and wrongs offered each to the other remitted and buried and never to be renewed any more from henceforth --

It is Agreed if there fall out injuries and wrongs for future to be done or Committed each to other or their Men they shall not presently revenge it but they are to appeal to the English ... and they are each to do as is by the English set down and if the one or the other refuse to do it shall be lawful for the English to compel them and to side and take part if they see cause against the Obstinate or refusing party --

It is agreed, and a conclusion of peace and friendship made, between the Narragansetts and the Mohegans as long as they carry themselvees orderly and give no just cause of offense; and that (n)either of them do shelter any that may be enemies to the English that ... formerly ... had hand in murdering or killing any English man or woman.

Either of them (Narragansetts or Mohegans) shall as soon as they can either bring the Chief Sachem of our late Enemies the Pequots that had the chief hand in killing the English to the ... English or take off their heads. Also for the murderers that are now agreed upon amongst us that are living, they shall as soon as they can possibly, take off their heads ... or else whersoever they or any of them shall come amongst them or to their Wigwams or any where if they can by any means come to them -

Also, and (the Pequots) shall not ... live in the country that was formerly theirs but now is the English by conquest neither shall the Narragansetts nor Mohegans possess any part of the Pequot Country without leave from the English...

The said Agreements are to be kept inviobly by the Parties above said and if any make breach of them, the other two may join and make war upon such as break the same unless satisfaction be made being reasonably required -- 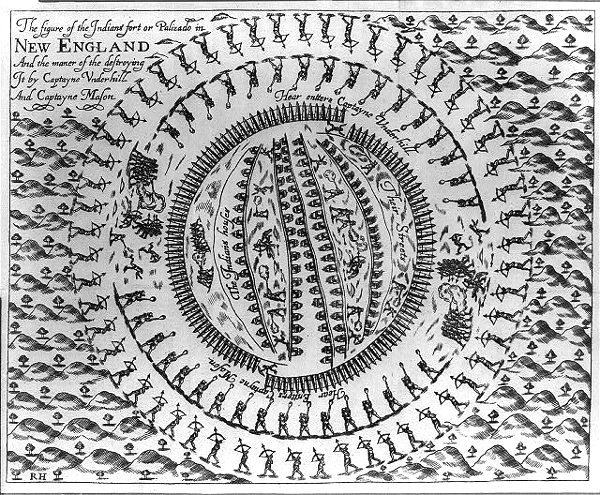