May 29, 1647 - The constitution of the General Assembly of Rhode Island is drafted, under the values of separating church and state, as well as permitting public referendums and initiatives in legislation. 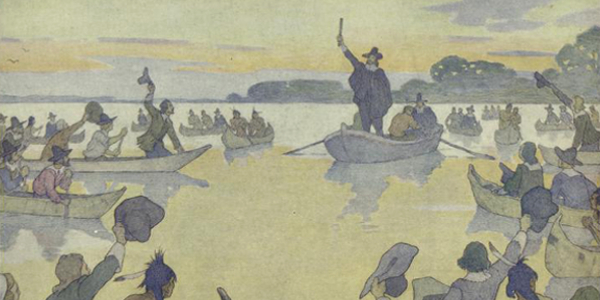 There was a need to codify laws within the Colony of Rhode Island and Providence Plantations since their charter in 1644, including the settlements prior of colonists which began in earnest in 1637. At the time, there were four significant settlement towns in the Rhode Island area; Providence, Portsmouth, Newport, and Warwick. They had agreed since their inception that the laws and rules would be created by the majority of the colonists; therefore no ruler or king, and by 1647, had assembled in a town hall setting to create their first Acts and Orders.

How did they get there? Colonists began moving into the territory of Rhode Island, inhabited by the Narragansett Indians, in 1622, to a trading post known as Sowams, today's Warren. When Puritan Roger Williams was banished from the Massachusetts Colony in 1636, he accepted land from the Narrangansett, establishing Providence Plantation, with values of majority rule and religious freedom. In 1637, another group of Massachusetts Colony dissenters founded Pocasset, which split within two years into Portsmouth and Newport. A fourth town, Warwick, was established in 1642 as Shawomet, with dissension from the Massachusetts Bay Colony who also claimed that territory. To solidify the claims of the settlements, Roger Williams received a parlimentary patent for the three towns of Rhode Island and Providence Plantations, not including Warwick, in 1644. While some refer to this as a English Colony Charter, it's validity was still challenged until 1663 by other colonies when an official Royal Charter was granted.

Made and agreed upon at the Generall Court of Election, held at Portsmouth, in Rhode Island, the 19, 20, 21 of May, Anno. 1647, for the Colonie and province of Providence.

Mr. John Coggeshall is chosen Moderator of the present Assembly.

2. It was Voted and found, that the major part of the Colonie was present at this Assemblie, whereby there was full power to transact.

3. It was further agreed, that in case the Assemblie departe unto the number of Fortie; those fortie shall stay and act as if the whole were present, and be of as full authoritie.

4. It was agreed, that all should set their hands to an engagement to the Charter.

5. It was agreed and ordered, that a week before any General Courte, notice should be given to every Towne by the head officer, that they chuse a Committee for the Transaction of the affaires there, except it bee for the Election of Generall Officers; and such as go not, may send their votes sealed.

6. It was ordered, upon the request of the Commissioners of the Towne of Providence, that their second instruction should be granted and established unto the, Vidg't. Wee do voluntarily assent, and are freely willing to receive and to be governed by the Lawes of England, together with the way of the Administration of them, soe far as the nature and constitution of this Plantation will admit, desiring (soe far as possible may be,) to hold a correspondence with the whole Colonie in the modell that hath been latelie shewn vnto us by our worthy Friends of the Island, if the Generall Court shall compleate and confirm the same, or any other Modell as the Generall Courte shall agree vpon according to our Charter.

7. It was unanimously agreed, That we do all owne and submit to the Lawes, as they are contracted in the Bulke with the Administration of Justice, according thereto, which are to stand in force till the next Generall Courte of Election, and every Towne to have a Coppie of them, and then to present what shall appeare therein not to be suitable to the Constitution of the place, and then to amend it.

8. It was agreed, that Warwick should have the same priviledges as Providence.

9. It was agreed, that the Generall Courte of Tryall should be held at Newport vpon the second Tuesday of June next ensuing.

10. It was agreed, that the Election of Offices should be by papers.

Mr. John Coggeshall is chosen President of this Province, or Colonie.

11. It is ordered, that all cases presented, concerning General Matters for the Colony, shall be first stated in the Townes, Vigd't, That is, when a case is propounded, The Towne where it is propounded, shall agitate and fully discuss the matter in their Towne Meetings and conclude by Vote; and then shal the Recorder of the Towne, or Towne Clerk, send a coppy of the agreement to every of the other three Townes, who shall agitate the case likewise in each Towne and vote it, and collect the votes. Then shall they commend it to the Committee for the General Courte (then a meeting called,) who being assembled and finding the Major parte of the Colonie concurring in the case, it shall stand for a Law till the next Generall Assembly of all the people, then and there to be considered, whether any longer to stand yea or no; Further it is agreed, that six men of each Towne shall be the number of the Committe premised, and to be freely chosen. And further it is agreed, that when the General Courte thus assembled, shall determine the cases before hand thus presented, It shall also be lawful for the said General Court, and hereby are they authorized, that if vnto them or any of them some case or cases shall be presented that may be deemed necessary for the public weale and good of the whole, they shall fully debate, discuss and determine ye matter among themselves; and then shall each Committee returning to their Towne declare what they have done in the case or cases premised. The Townes then debating and concluding, the votes shall be collected and sealed up, and then by the Towne Clarke of each Towne shall be sent with speed to the General Recorder, who, in the presence of the President shall open the votes; and if the major vote determine the case, it shall stand as a Law till the next General Assemblie then or there to be confirmed or nullified.

13. It is ordered, that each Towne shall choose and order ye authoritie of two Surveyors for the Highways, and appoint time to mend them; also that they are to have notice of all cattle that shall be exported, and returne the marks of them unto the Towne; and if any shall presume to export any without giving notice of it to the men appointed, or their Deputies he shall forfeit all such Cattle so exported, or the worth of them.

14. It is ordered, that the Inhabitants of Portsmouth and Newport here present doe presently choose their officers of the Island; but that this act shall be not precedent for the future, but that the constant course of choosing shall be hereafter, when as the year is out, as the Major votes of the Townes of Portsmouth and Newport shall order it sometimes before the year is out, in some peaceable and moderate way which they shall agree upon.

Additional paragraphs address the use of the courts, marriage, licenses, drunknenness, and other issues.

Who Was John Coggeshall

For many history scholars, students, or educators, the name of Roger Williams is best known in the history of the Colonies of Rhode Island and Providence, but less is known of the man chosen by the four towns to moderate the Acts and Orders meeting.

Coggeshall was born in Essex, England, forty-six years old when the Acts and Orders meeting was held. He had been a successful merchant prior to emigrating to the Massachusetts Bay Colony in 1632 with his family on the ship Lyon. Coggeshall had an important role in that colony, both as a silk merchant and government officer until he voted to acquit Anne Hutchison, his next door neighbor, in her trial as a heretic. With her banishment, those who acquitted her were also sent from the colony. They became part of the group of dissenters who established Pocasett, then Newport under a compact of majority citizen rule. Coggeshall and his family were granted four hundred acres of land in Newport, and he was elected assistant governor of Newport in 1640. In 1647, after moderating the meeting of the four towns, he was elected chief magistrate and President under the Acts and Orders constitution. 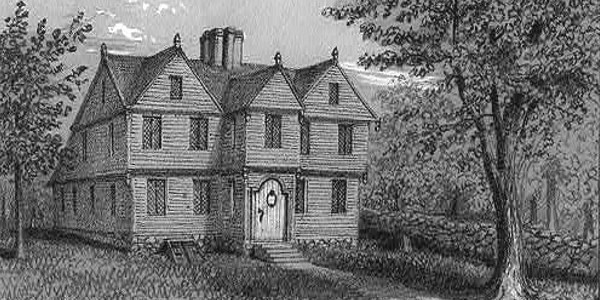